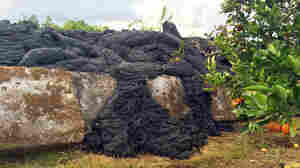 Lava near the leading edge of the flow oozes over a concrete slab and toward a tangerine tree before solidifying near the town of Pahoa on the Big Island of Hawaii earlier this week. U.S. Geological Survey/AP hide caption

Lava Flow In Hawaii Spares Homes, But Threatens To Cut Off Community

October 31, 2014 • The state has sent National Guard troops to the town of Pahoa to assist with a road block and security.

Saving The Amazon Will Take More Than Stopping Loggers

October 30, 2014 • In order to save the Amazon, it's not enough for deforestation to stop; areas that have been denuded also need recuperation. A Brazilian research scientist has released a report with the World Wildlife Fund that suggested actions to curb the effect of humans on the world's largest rainforest.

Saving The Amazon Will Take More Than Stopping Loggers 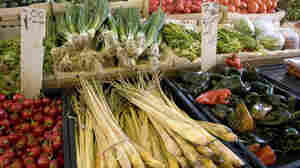 Confused about all the different sustainability ratings out there? The simplest option may be to shop at your local farmer's market. iStockphoto hide caption

Apps Aim To Guide You On 'Sustainable Food' (Whatever That Means)

October 30, 2014 • Consumers who care about how their food is produced have a growing number of apps they can turn to at the supermarket. The problem? Nailing down just what sustainability means when it comes to food. 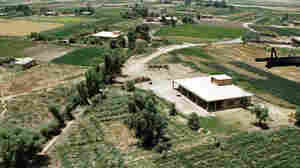 Farms outside Baghdad as seen from a U.S. Army Blackhawk helicopter. Much of Iraq's soil has a high salt content because of flooding and poor drainage. Jim Gordon/U.S. Army Corps of Engineers/Flickr hide caption

October 28, 2014 • The area of land no longer suitable for farming because of salt degradation is rising quickly. Scientists argue the private sector should help fund efforts to reverse it since it relies on the crops. 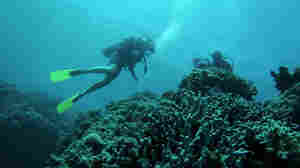 These scuba divers are among the 2 million tourists who visit the Great Barrier Reef each year. They contribute about $5.6 billion to Australia's economy, according to the Queensland government. Steve Dorsey for NPR hide caption

As Great Barrier Reef Ails, Australia Scrambles To Save It

October 28, 2014 • One Australian report estimated the reef had lost more than half its coral since 1985. The government is considering a new 35-year plan to rescue the reef, but some say it falls short.

As Great Barrier Reef Ails, Australia Scrambles To Save It 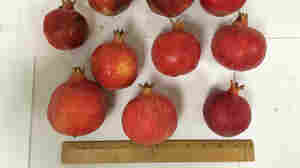 These pomegranates are about an inch smaller than the typical size, but they're packed with antioxidants. Courtesy of Tiziana Centofanti hide caption

October 23, 2014 • Is California's severe drought hurting the nutrient content of fruit? No, preliminary data on pomegranates suggest. The fruit may be smaller, but packed with more antioxidants, tests show. 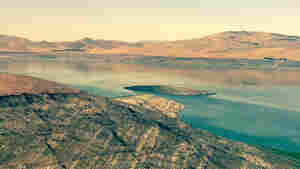 The San Luis Reservoir in central California is the largest "off-channel" reservoir in the U.S. It is currently at less than 30 percent of its normal capacity. Kirk Siegler/NPR hide caption

October 22, 2014 • The dearth of water in this state is showing no signs of easing. Officials have introduced plans to revamp the water rationing and distribution systems until the rains come. If they ever come.

Why Are The Great Lakes On The Rise?

October 20, 2014 • Host Audie Cornish talks with Drew Gronewold, a hydrologist at the National Oceanic and Atmospheric Administration, about why water levels in lakes Superior, Michigan and Huron are rising.

Why Are The Great Lakes On The Rise? 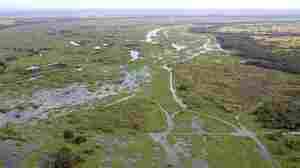 The restoration's goal is to put as much of the Kissimmee as possible back to the way it was. This photo shows the river after restoration. Courtesy the South Florida Water Management District hide caption

The Kissimmee: A River Re-Curved

October 19, 2014 • In Florida, a key river is undergoing the largest environmental restoration effort in the world. But when complete, a looming water shortage means the river's waters still face an uncertain future.

The Kissimmee: A River Re-Curved 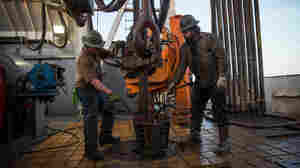 October 17, 2014 • Just a few years ago, authors were predicting production would soon hit a peak and then decline. But since then, supplies have surged. So are the forecasters now slapping themselves in the head? 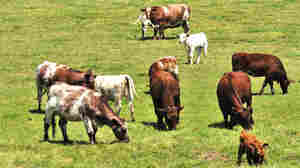 Researchers say there's plenty the beef industry can do to use less land and water and emit fewer greenhouse gas emissions. But producers may need to charge a premium to make those changes. iStockphoto.com hide caption

October 16, 2014 • Labels like "organic" and "grass-fed" don't capture the beef industry's true environmental impact, researchers say. Why not have a label that assesses water use, land use and greenhouse gas emissions? 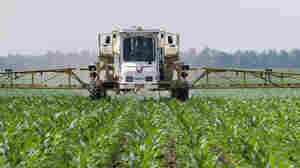 Corn farmer Jerry McCulley sprays the weedkiller glyphosate across his cornfield in Auburn, Ill., in 2010. An increasing number of weeds have now evolved resistance to the chemical. Seth Perlman/AP hide caption

New GMOs Get A Regulatory Green Light, With A Hint Of Yellow

October 15, 2014 • Farmers will be able to plant types of corn and soybeans that can tolerate doses of two weedkillers. It may be one of the most significant developments the world of weedkilling in more than a decade.

October 15, 2014 • California cities are taking drastic measures and none more so than Santa Cruz, where rationing is enforced through penalties. And if you can't afford to pay your fine, there's always Water School.

How Too Many Trees Contribute To California's Drought

October 14, 2014 • As the historic drought drags on, just about everyone wishes the state had gotten more water this year. That's largely up to snow and rainfall, but it also depends on trees in the state's mountains.

How Too Many Trees Contribute To California's Drought

The Tricky Nature Of Putting Science On Trial

October 11, 2014 • The appeal for seven Italian scientists convicted of manslaughter after downplaying the possibility of an imminent earthquake has began. NPR's Arun Rath speaks with reporter David Wolman about the trial.

The Tricky Nature Of Putting Science On Trial