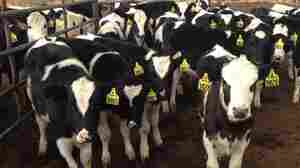 There are about 2,000 dairy cows on Pete Olsen's fifth-generation farm in northern Nevada. A new milk processing plant is now putting pressure on Olsen and other dairy farmers to expand the size of their herds. But with the ongoing drought, farmers are struggling to get enough feed for the cows they already have. Kirk Siegler/NPR hide caption

February 28, 2014 • Severe drought has left northern Nevada's farmers scrambling to find enough feed for the cows they already have. It comes as farmers are under pressure to expand to provide powdered milk to China. 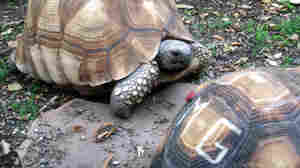 Out of the 330 species of turtles and tortoises, over half are threatened with extinction, says conservationist Eric Goode. Gloria Hillard/NPR hide caption

February 27, 2014 • The ploughshare tortoise's ornate golden shell makes it a popular black market pet. In California, the Turtle Conservancy is trying to give the threatened species a second chance. 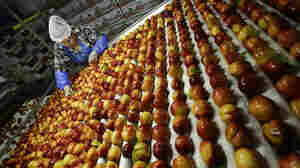 February 27, 2014 • Americans wasted 31 percent of all food that was available in 2010, the USDA reports. For the first time, the agency calculated what that means in terms of calories, too. 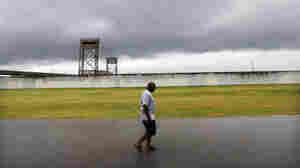 Levees, like this one in New Orleans, must be certified by the U.S. Army Corps of Engineers before appearing on federal flood maps. This change has resulted in higher flood insurance premiums in some areas. Mario Tama/Getty Images hide caption

February 27, 2014 • The law, passed in 2012, was meant to shift the financial risk of insuring flood-zone properties to homeowners. But some residents' premiums have skyrocketed. 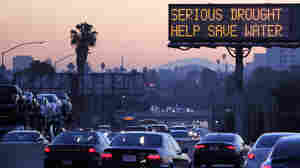 The Far Reach Of The West's Drought

February 26, 2014 • As the state slogs through a major drought, officials look for new water sources — like desalination plants that make water from the Pacific drinkable. Opponents worry about environmental damage.

Feeling The Fiscal Squeeze, EPA Seeks To Slim Down

February 26, 2014 • The Environmental Protection Agency is offering buyouts to some of its employees. The move comes as a number of federal agencies, under pressure from the sequester, are trying to slim their budgets.

Feeling The Fiscal Squeeze, EPA Seeks To Slim Down

Portable Potables: How To Fight Drought By Reusing Water

February 26, 2014 • David Sedlak, a professor of civil and environmental engineering at the University of California, Berkeley, explains the many methods of capturing and reusing drinking water.

Portable Potables: How To Fight Drought By Reusing Water 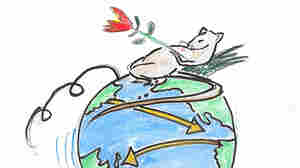 Is Planet Earth Under New Management?

February 26, 2014 • Look at what's happening to the planet, its air, its soil, its animals, its plants. Maybe it's time to point a finger at the cause of all this change — and name it. 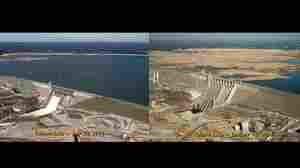 February 25, 2014 • Farmers in California face hard choices as a drought threatens to ruin their crops. A striking photo shows Northern California's Folsom Lake at only 17 percent of its capacity. 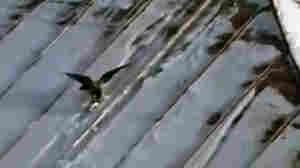 A video of a crow using a jar lid as a sled has been a recent hit on YouTube. But as winter storms continue, many of us are running out of ways to enjoy the snow. YouTube hide caption

Winter Blahs Got You Down? 'Crowboarding' Video Can Help

February 25, 2014 • If the snow and ice have cramped your style, you might take cues on how to make the best of things from a crow. The bird was filmed using a jar lid as a sled, over and over. 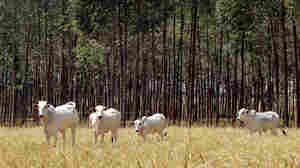 February 25, 2014 • A study argues that if we want to cut emissions from meat production, we should help farmers produce more meat with less land. Farmers also need incentives not to cut down forests to graze animals.

February 25, 2014 • Methane is a potent greenhouse gas from oil and gas production. The rules require companies to find and repair equipment leaks. The rules also will reduce air pollution that contributes to smog.

February 24, 2014 • Liberal activist Tom Steyer pledged to spend $100 million in the 2014 election cycle to promote his favored cause of fighting climate change. David Greene talks to Steyer about his political plans. 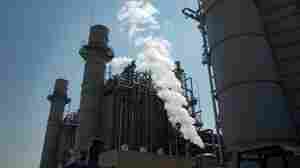 February 24, 2014 • The case focuses on the Clean Air Act permitting required of companies that want to build or modify facilities expected to emit a lot of gases. Critics call the requirement costly and time-consuming.