Swiss Voters To Decide Whether To Ban New Minarets

November 27, 2009 • Switzerland holds a referendum on Sunday to decide whether to amend the country's constitution to ban the construction of minarets. Those are the slender towers attached to most mosques that are traditionally used to make or broadcast the Muslim call to prayer. The far right Swiss People's Party claims the minarets symbolize a politicized Islam. Opponents say the measure is a thinly veiled attack against the country's law-abiding Muslim citizens.

Swiss Voters To Decide Whether To Ban New Minarets

November 26, 2009 • A new report in Ireland — the second such report this year — says the Roman Catholic Church in the Dublin Archdiocese covered up decades of child abuse committed by priests. The inquiry accuses Catholic bishops of protecting the Church's reputation at the expense of the children in its care.

November 26, 2009 • The head of Germany's armed forces and a senior official from the defense ministry resigned Thursday following allegations the ministry withheld information about civilian casualties sustained during an airstrike in Afghanistan in September. Christian Thiels, senior defense correspondent for the German television network ARD, says the two officials who resigned knew of the civilian casualties.

Belgian Thought To Be In Coma Now Responsive

November 24, 2009 • Twenty-three years ago, a Belgian car-crash victim was diagnosed as being in a vegetative state. But doctors now say he appears to have been conscious the whole time. The man is now communicating using a special touchscreen. Neurologist Steven Laureys, who leads the Coma Science Group at the University of Liege in Belgium, says people in non-communicative states are misdiagnosed up to 40 percent of the time.

Belgian Thought To Be In Coma Now Responsive

November 24, 2009 • A long-awaited public inquiry into Britain's role in the Iraq war opened Tuesday with former civil servants questioned by a panel of investigators. But critics say the panel lacks the powers to get to the heart of the issues surrounding Britain's involvement in the war.

November 24, 2009 • Spanish leaders are scheduled to appear in Parliament Wednesday to defend their handling of the hijacking of a Spanish fishing boat off the coast of Somalia. The hijacking ended last week after Somali pirates reportedly were paid $3.5 million in ransom. Some people are wondering if Spanish fishing boats are in even more danger now. 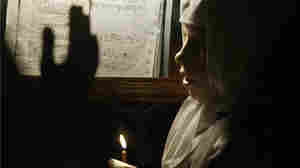 A young conventual sings during an Orthodox Easter celebration Mass at the St. Nicholas convent in the town of Maloyaroslavets, about 80 miles southwest of Moscow, in April 2004. Denis Sinyakov/AFP/Getty Images hide caption

November 23, 2009 • Russia has seen an explosion in the number of Orthodox convents in the decades since the end of communist rule. There are now more than 240. Most of the renovated convents — many in remote areas — are based on their distant history and devotion to their particular icons. But for many reasons, reviving the past is far from easy.

November 23, 2009 • In Northern Ireland, a 400-pound car bomb failed to detonate over the weekend. It was placed outside police headquarters in Belfast, and that has residents wondering if dissident factions of the IRA are intent on stepping up violence.

November 19, 2009 • One of Britain's most revered companies is under threat of a takeover. Candy maker Cadbury already rejected a hostile takeover bid by U.S. giant Kraft Foods. Hershey has confirmed it is considering a joint takeover bid for Cadbury, along with Italian chocolate maker Ferrero. But it seems the offers may need to be considerably sweetened to persuade the British.

In London, A New Play Sheds Fresh Light On Enron

November 16, 2009 • A new musical in London has an unusual storyline: The collapse in 2001 of the Houston-based energy company Enron. The play centers on former CEO Jeffrey Skilling and his efforts to make Enron a global corporate titan. It all plays out as a sort of Faust meets Citizen Kane.

In London, A New Play Sheds Fresh Light On Enron

November 16, 2009 • In the city of the ancient Romans and Michelangelo, architecture buffs got a preview over the weekend of something decidedly modern: Rome's new museum of contemporary art. It was designed by Iraqi-born Zaha Hadid.

November 15, 2009 • Losing your car keys, forgetting an anniversary, leaving water running in the bathtub; there are countless ways our memories can fail us. But when you put your mind to it, your brain can do amazing things. Take, for example, Ben Pridmore. He just won the World Memory Championships, held Saturday in London. Host Liane Hansen speaks with Pridmore, who had to memorize hundreds of numbers, dates and even decks of cards in order to prove his mental prowess. 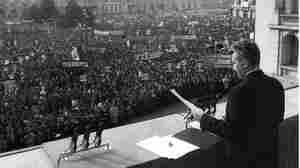 November 12, 2009 • Communist rule of Romania ended 20 years ago in a bloody revolt that killed more than 1,000 people. The country is now a member of the EU, with a solid economy and a passionate, if hectic, democratic life. But some believe Romania's rampant corruption is threatening its future.

November 11, 2009 • British Prime Minister Gordon Brown is facing heavy criticism for his handling of the war in Afghanistan. In one town, which has begun an unofficial tradition of mourning British soldiers as the coffins are driven through the streets, support for the troops is universal, but many residents question the Afghanistan mission. 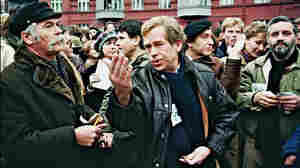 Dissident writer and opposition leader Vaclav Havel addresses the crowd at a rally in Prague celebrating the 40th anniversary of the Universal Declarations of the Human Rights, Dec. 10, 1988. Havel was elected the first president of Czechoslovakia after the fall of the communist regime in 1989. Joel Robine/AFP/Getty Images hide caption

November 11, 2009 • Prague is brimming with commerce, optimism and tourists two decades after the Velvet Revolution overthrew the communist government and brought dissident poet Vaclav Havel into the presidential palace. But some Czechs worry their once dynamic political culture is declining and active citizenship waning.