April 30, 2016 • British political operative Steve Hilton tells NPR's Scott Simon what he thinks the conservative movement needs both in the U.K. and the U.S. 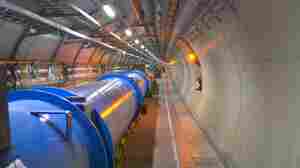 April 29, 2016 • The Large Hadron Collider in Switzerland is offline, following a run-in with a small mammal that munched on a power cord. 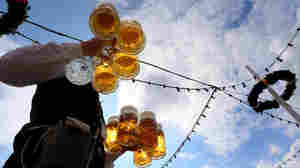 A waiter carries beers at the Theresienwiese fair grounds of the Oktoberfest beer festival in Munich, southern Germany, last September. For centuries, a German law has stipulated that beer can only be made from four ingredients. But as Germany embraces craft beer, some believe the law impedes good brewing. Karl-Josef Hildenbrand/AFP/Getty Images hide caption

April 29, 2016 • For centuries, German law has stipulated that beer can only be made from four ingredients. But as Germany embraces craft beer, some believe the law impedes good brewing.

Leicester City On The Verge Of An Improbable, Historic Title

April 29, 2016 • Long a minor player in England's Premier League, Leicester City is now poised to win the title, beating out some of the most talented clubs. Steve Inskeep talks to BBC sports announcer Jason Bourne.

Leicester City On The Verge Of An Improbable, Historic Title 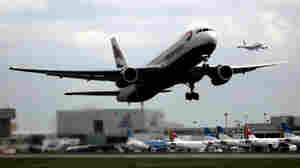 Not A Drone After All? Unclear What Hit That British Airways Plane

April 28, 2016 • The incident prompted calls for more drone regulation, but a U.K. lawmaker now says it probably was not a drone that struck the plane. And an investigation has ended because of a lack of evidence.

Assessing The Myth Of Vladimir Putin

April 28, 2016 • Is Russian President Vladimir Putin the unquestioned master of his realm? Steve Inskeep talks to Mark Galeotti, a professor at New York University, about a piece he's written for the website Vox.

Assessing The Myth Of Vladimir Putin 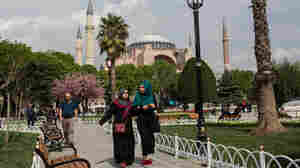 April 28, 2016 • In Istanbul's Grand Bazaar, a merchant calls it the worst tourist season in nearly four decades. Terrorism fears and a travel ban by Russia, an important source of tourists, are keeping visitors away.

April 27, 2016 • For three years, someone has been putting funny, often inspiring signs on a front stoop in Kentish Town, London. NPR spoke with the man behind the words, poet Mark Waddell. 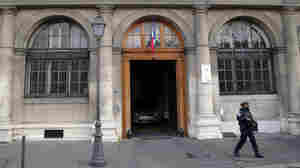 A police officer guards the entrance of the judicial police headquarters in Paris. The French prosecutor's office said Salah Abdeslam, the key suspect in the Paris attacks, was transferred from Belgium to France on Wednesday morning. Michel Euler/AP hide caption

April 27, 2016 • Abdeslam, who is believed to be the only surviving participant of the attacks in Paris last November, was captured in Brussels in March. He's expected to appear before a French judge today. 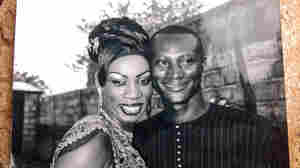 April 27, 2016 • But he wouldn't listen. Disaster struck. And now she's one of a growing number of migrant widows in Africa.

April 26, 2016 • NPR's Kelly McEvers speaks with Matthias Williams, chief Ukraine correspondent for Reuters, about what Chernobyl is like today 30 years after the nuclear power plant exploded.

April 26, 2016 • An inquest into the deaths of 96 soccer fans in a British sports stadium has concluded that faulty policing was responsible. The supporters of Liverpool Football Club were crushed to death during a game in 1989. Their relatives had to fight for nearly 30 years to overcome a police cover-up, which included allegations that the fans themselves were to blame for the disaster. 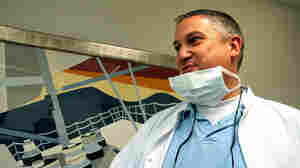 Dentist Jacobus Van Nierop, pictured in his office in Chateau-Chinon, France, in 2009, has now been banned from practicing. Christophe Masson/AP hide caption

'Dentist Of Horror' Gets 8 Years For Harming Patients In France

April 26, 2016 • German scientists are researching how an ultrasound technique would bounce off a person's head — noting the special way a skull vibrates in response. It would be as unique as a fingerprint. 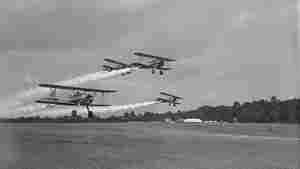 In the 1940s, planes demonstrate DDT spraying at Congressional Airport, outside of Washington, D.C. They were part of a fleet headed to Greece to target mosquito breeding areas. Bettmann Archive/Getty Images hide caption

A Big 'Woo-Hoo' For Europe On #WorldMalariaDay: No New Cases In 2015

April 25, 2016 • How did the Europeans do it? And are there lessons to be learned for the developing world?