May 31, 2017 • Poetry reviewer Tess Taylor has just spent the past semester teaching in Belfast, Ireland. She talks about how Seamus Heaney poems and visions of home swirled in her head.

May 31, 2017 • The Hungarian government wants to close a university founded by the financier George Soros. Students and faculty have appealed to the U.S. for help, but some Republican lawmakers think Soros is the problem. 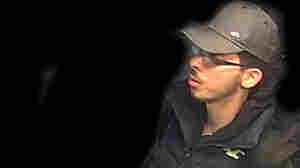 Manchester Bomber Bought Most Of Weapon's Parts By Himself, Police Say

May 31, 2017 • U.K. authorities are still trying to find the distinctive blue suitcase Salman Abedi was seen carrying as he moved around Manchester's city center.

Trump Tweets U.S. Has A Massive Trade Deficit With Germany

May 31, 2017 • Rachel Martin talks to Constanze Stelzenmuller, who studies Germany and European foreign policy at the Brookings Institution, about what Trump's words mean for U.S.-German relations.

Trump Tweets U.S. Has A Massive Trade Deficit With Germany

May 31, 2017 • The Kremlin controls all the national TV stations in Russia. So opposition leader Alexei Navalny has started his own channel on YouTube to get his message out to the Russian people.

May 30, 2017 • Hungarian Prime Minister Viktor Orban's government is trying to shut down nongovernmental organizations by turning Hungarian public opinion against them. It's the latest in a series of actions in recent months aimed at creating what Orban calls an "illiberal state." 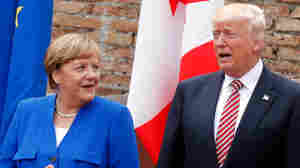 May 30, 2017 • Trump tweeted on Tuesday that the U.S. has a "MASSIVE" trade deficit with Germany that is "very bad for the U.S." But this isn't at all the right way to think about trade deficits.

Thousands Turn Out For Cheese-Rolling Race In England

May 30, 2017 • In Cooper's Hill, England, people hurled themselves down a hill, chasing after a 9-pound wheel of cheese. The humans typically trip over one another. Winner of the race gets the cheese.

Thousands Turn Out For Cheese-Rolling Race In England 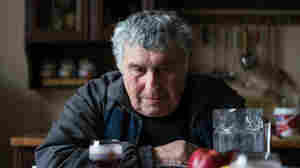 Since he was forced out of his home in 1993, Yuri Gvasalia has lived in a former hotel. Kartli, as it's called, sits on the far fringes of Tbilisi, Georgia's capital city. It was one of thousands of buildings the Georgian government opened up as temporary housing for people displaced by the war. Two decades later, people are still living there. Claire Harbage/NPR hide caption

Displaced By War, A New Apartment Means Leaving Friends Behind

May 30, 2017 • The government of the Republic of Georgia, resettled those displaced by war in crumbling apartments. Now that they're getting new homes, what happens to the sense of community that survivors forged?

Displaced By War, A New Apartment Means Leaving Friends Behind

Top-Seeded Woman Defeated In First Round Of French Open

May 29, 2017 • The French Open just started and already the women's No. 1 seed is out. NPR's Robert Siegel talks with Jon Wertheim of Sports Illustrated.

Top-Seeded Woman Defeated In First Round Of French Open

May 29, 2017 • This weekend, German Chancellor Angela Merkel addressed fraying relations between Europe and the U.S., saying Europe may no longer be able to count on others. NPR's Robert Siegel talks with Washington Post diplomatic correspondent Anne Applebaum for analysis.

May 29, 2017 • Russian President Vladimir Putin traveled to France on Monday to hold talks with Emmanuel Macron, who won the recent presidential election in France despite Russian support for his opponent. 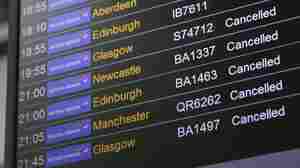 A board at Heathrow Airport in London displays a slew of cancellations for British Airways flights on Saturday. An IT systems failure laid waste to flyers' plans at the U.K.'s two major airports over the weekend, and the situation is yet to be completely resolved as of Monday. Daniel Leal-Olivas/AFP/Getty Images hide caption

May 29, 2017 • A "catastrophic" IT systems failure has disrupted roughly 75,000 British Airways passengers' flights since it struck the company Saturday morning. "We profusely apologize," the airline's CEO said. 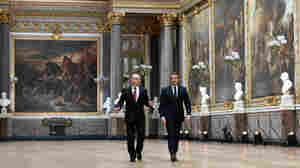 French President Emmanuel Macron (right) and Russian President Vladimir Putin walk in the Galerie des Batailles (Gallery of Battles) at the Palace of Versailles as they arrive for a joint press conference following their meeting near Paris on Monday. Stephane de Sakutin/AP hide caption

Macron Opens A 'Demanding' Dialogue With Putin In France

May 29, 2017 • The newly elected French president is hosting his Russian counterpart at the Palace of Versailles on Monday. On the docket for the leaders: Ukraine, Syria and mending their countries' tattered ties.

France And Germany Stake Out New Priorities After Trump Visit

France And Germany Stake Out New Priorities After Trump Visit