France Wants To Be A Player In 'New Middle East'

August 30, 2011 • After taking the lead in efforts to drive Moammar Gadhafi from power in Libya, France appears set on playing a bigger role on the international stage. President Nicolas Sarkozy is pressing for the U.N. Security Council to act against Syrian President Bashar Assad, who has brutally cracked down on his people. France will also try to extend its influence on the Middle East peace process.

France Wants To Be A Player In 'New Middle East' 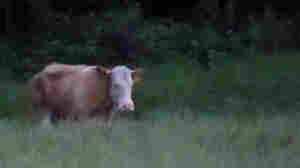 Yvonne, a cow that has lived in the wild since eluding a trip to the slaughterhouse in May, has foiled all attempts to capture her. Now officials say that she's not to be disturbed. Josef Enzinger/dapd hide caption

August 29, 2011 • The search for Yvonne, the cow that dashed to freedom just before she was to be transported to a slaughterhouse in Germany, has been called off. Yvonne has been living in the Bavarian forest for nearly 100 days, resisting sophisticated attempts to capture her.

Britain's Gang Violence Is Not A 'Quick Fix Issue'

August 29, 2011 • In London, police are still struggling to draw lessons from the city's explosive riots weeks ago, wondering what role organized gangs played. And the British, in a controversial move, turned to an American for help. Bill Bratton — as a former police chief in New York City and later Los Angeles — spent years combating gang violence. Bratton talks to David Greene about what assistance he'll be providing Prime Minister David Cameron.

Britain's Gang Violence Is Not A 'Quick Fix Issue'

August 27, 2011 • You know the old adage, "If at first you don't succeed, try, try again?" Well, Pat Gallant-Charette certainly does. Last Monday, on her third attempt since 2008, the 60-year-old from Westbrook, Maine, swam across the English Channel in less than 16 hours. Host Scott Simon talks with Gallant-Charette, who is now the oldest American woman to swim the English Channel. 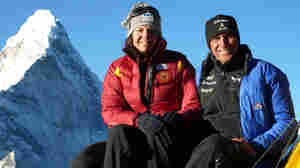 Climber Gerlinde Kaltenbrunner sits with her husband, Ralf Dujmovits, in this file photo from 2009. This week, Kaltenbrunner became the first woman to climb all of the world's 14 tallest peaks without using supplementary oxygen. Ralf Dujmovits/dapd hide caption

Woman Reaches K2's Summit, And A Place In History

August 26, 2011 • At more than 28,000 feet, K2 is the second-highest mountain in the world. And when Gerlinde Kaltenbrunner reached its summit this week, she became the first woman to climb all 14 of the world's tallest peaks without using oxygen tanks.

Woman Reaches K2's Summit, And A Place In History

August 23, 2011 • A New York judge decided Tuesday to drop all sexual assault charges against the former head of the IMF, Dominique Strauss-Kahn. The case was followed closely in France, where Strauss-Kahn had been expected to run for president, until he was accused of attacking a hotel housekeeper. Strauss-Kahn is expected to return to France soon, but his troubles are far from over.

August 23, 2011 • A judge has formally dismissed criminal charges against Dominique Strauss-Kahn. The day brought a measure of relief for the former International Monetary Fund chief, but it does not mark an end to his legal woes.

August 23, 2011 • The fight for Tripoli is on. Rebels and forces loyal to Libyan leader Moammar Gadhafi have each, in the past couple of days, claimed to have the upper hand. But the house-to-house combat characteristic of urban warfare poses new challenges for the rebels and the NATO forces supporting them.

August 23, 2011 • Prime Minister David Cameron is facing embarrassing new allegations connected to the phone hacking scandal in Britain. Cameron was criticized for hiring former News of The World editor Andy Coulson to be his communications chief. Coulson resigned in January this year. But now, there are reports that Coulson continued to receive payments and benefits from the newspaper — even while working for Cameron's government. 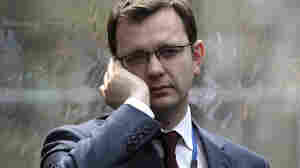 August 23, 2011 • Andy Coulson, reports the BBC, received hundreds of thousands of pounds in severance pay from News Corp. after he took a job as the prime minister's top media advisor.

August 23, 2011 • Members of the Spanish parliament are cutting their vacations short for an emergency debate on the government's austerity plan. Spain's huge debts are contributing to the financial chaos in Europe, and the Spanish government is trying to find a balance between stimulus and deficit reduction, ahead of an upcoming election.

August 23, 2011 • Reports from New York suggest a judge will drop all criminal charges against Dominique Strauss-Kahn. The news will likely have mixed reaction in France, where people are sharply divided over their feelings toward the former head of the IMF.

August 22, 2011 • NATO airstrikes have been a critical part of the military campaign that is close to toppling the regime of Libyan leader Moammar Gadhafi. NATO's strategy has been criticized during the long months when the conflict seemed to be at a standoff. Now, as rebels take the city of Tripoli, NATO's policies seem to have worked after all.

August 22, 2011 • NATO and the European leaders who organized the long bombing campaign of Libya see the rebel takeover of Tripoli as a vindication of their much-criticized policies.

August 22, 2011 • The Soviet Union was at a tipping point two decades ago. Communist party hardliners, determined to stop President Mikhail Gorbachev's moves towards democracy, attempted a coup. The action backfired, and rallied many Russians behind Boris Yeltsin.