Accessibility links
What's In Our Name: Why Goats? Why Soda? : Goats and Soda We'll cover malaria and microloans. Ebola and education. We'll look at efforts to lift families out of poverty — and provide clean drinking water and electricity. So what should we call ourselves? 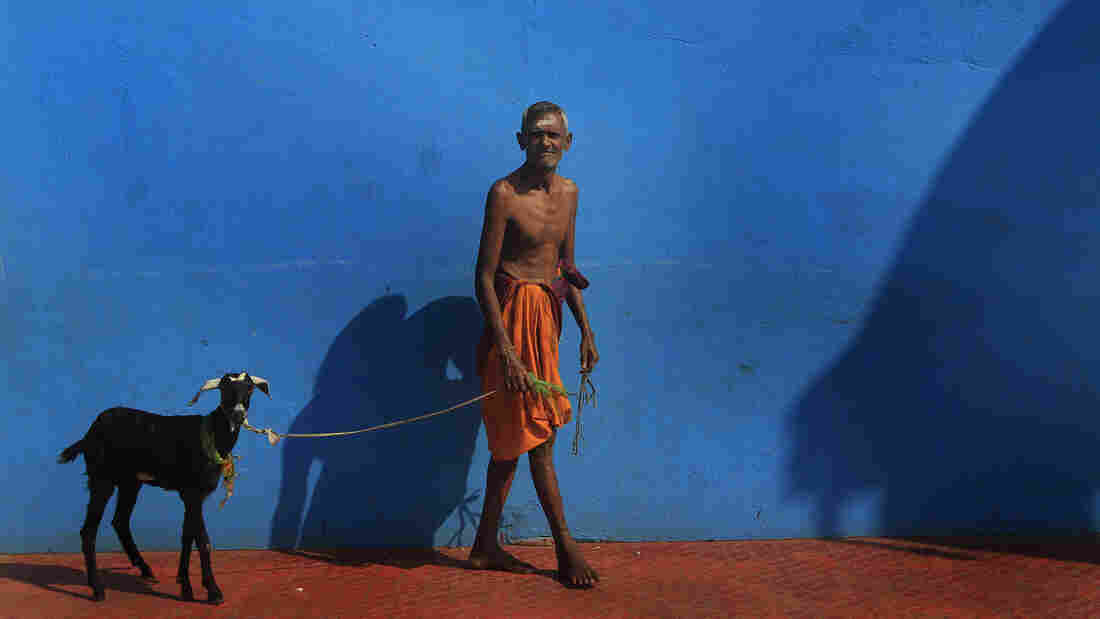 On a hot day, a priest leads a goat to the shade of a tree at a Hindu temple in Colombo, Sri Lanka. Dinuka Liyanawatte /Reuters/Corbis hide caption

"Goats and Soda: Stories of Life in a Changing World."

That's the name of NPR's new blog, covering health and all sorts of development around the world.

You may be thinking: "Goats? Soda? This blog is going to look at communicable diseases, education struggles, sanitation concerns ... and it's called 'Goats and Soda'?"

We considered many names. A few seemed promising but fell short. Unarrested Development? Globelandia? Up the Road? They were too long, too hard to say on the radio or too vague.

Then Anders Kelto, a radio reporter on our team who's been based in South Africa for the past four years, proposed: "Goats and Soda."

Traveling about in Africa, he saw a lot of goats. And a lot of soda. "In rural southern Malawi, I came across a roadside snack shop in the middle of nowhere. The woman running the shop somehow had a refrigerator full of cold sodas. It struck me that a rather amazing sequence of events had led to that cold Coke in my hand."

We liked the name. It's lively. It's down to earth. And it's definitely original. A google search for "Goats and Soda" yielded zero results.

Then we had to ask ourselves: Does this name really make sense as a title for our blog? And will it cause any concerns?

Goats and soda, as it turns out, are complicated icons. In many parts of the world, goats are a force for positive change. Dozens of charities give goats to poor families to provide nutrition and/or income. But Leo Horn-Phathanothai, director for international cooperation at the World Resources Institute, points out that such donations can make it seem "as if good things only happen to people as a result of beneficent actions by big-hearted foreigners."

"The name is creative and unique and not rude," says Wilbur Sargunaraj, who posts his clever videos about life in India on YouTube. "But I think you should be aware that many Indians are vegetarians and do not eat meat. An alternative could be 'Rice and Soda.' "

As for soda, we all know it has been linked to obesity, an emerging health issue in many middle-income countries, such as Mexico and China. Yet global health workers are envious of the fact that Big Soda knows how to get its product to the remotest spots and keep it cold. That's what global health workers would like to do with vaccines. The English nonprofit group ColaLife explores the use of sodalike strategies to keep medicines on ice.

So that's a little bit about what's in our name. We know that it will have detractors – and we hope it will have fans as well.

"I love the name 'Goats and Soda,' " says Kathryn Whetten, professor of public policy and global health at Duke University. "It grabs the reader, creates a curiosity in what it means and how goats and soda can be related, and makes the person want to read more."

And we hope that's what you do.