Accessibility links
This Kenyan Runner Can't See But He Has A Far-Reaching Vision : Goats and Soda Henry Wanyoike lost his sight two years after graduating from high school. That didn't stop him from running — and bringing the joy of sports to other disabled Kenyans. 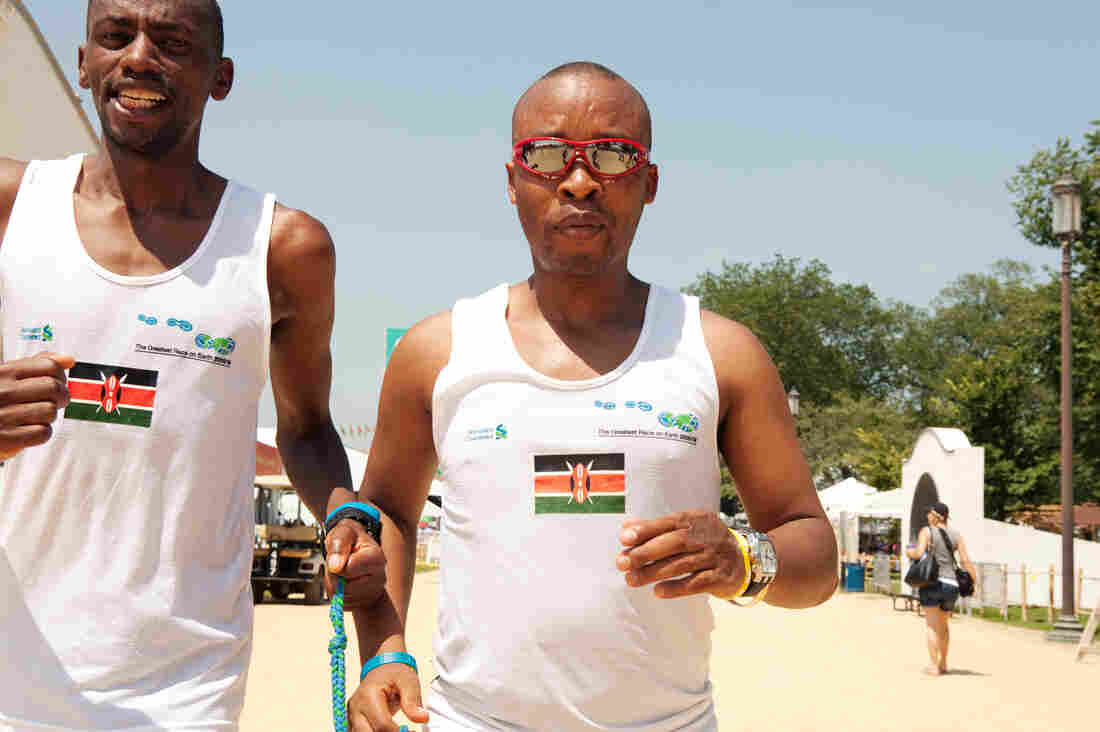 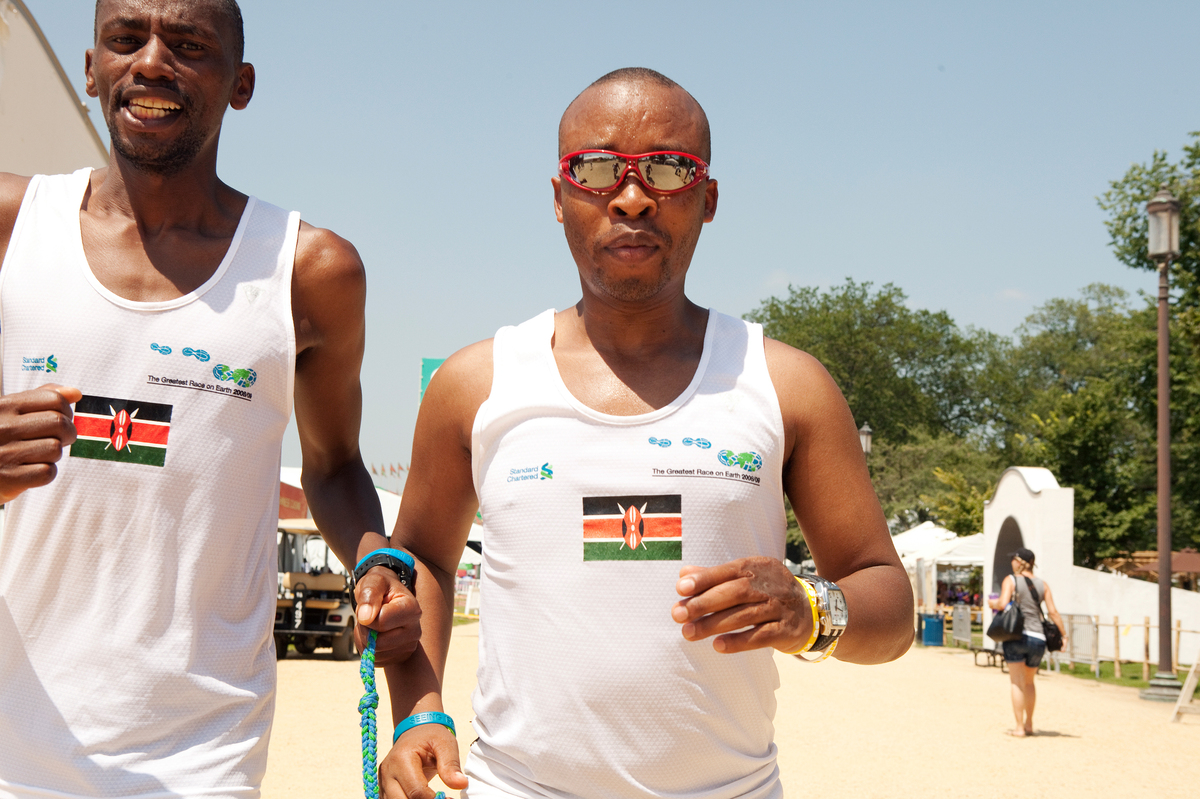 When Henry Wanyoike and Joseph Kibunja first started running, it was out of necessity. The childhood friends had no other way to travel the three miles from their Kenyan village to school. So they made the barefoot trek every day, in both directions, regardless of weather.

Thirty years later, Wanyoike and Kibunja are still running together, only now, they're headed to the finish lines of races around the world — and often getting there first.

Although Kenya is known for producing champion runners, the duo stands out: Wanyoike is blind and Kibunja serves as his guide.

In 1995, two years after graduating from high school as a track star, Wanyoike suffered a stroke. He lost his sight and thought he'd never run again. Three years later, at a rehabilitation center, someone suggested he try with a partner. To his amazement, it worked. And it worked even better once his pal Kibunja took on the guide role.

They stay side-to-side and hold a foot-long blue and green rope between them — in Wanyoike's right hand and Kibunja's left. Through a combination of verbal and physical cues, Kibunja indicates when they need to turn, avoid an obstacle and, of course, speed up to stay ahead of the competition.

The technique has allowed them to win gold medals at multiple Paralympics, set world records (including the fastest blind marathon in just 2:31:31) and serve as an example for just about everyone they meet. 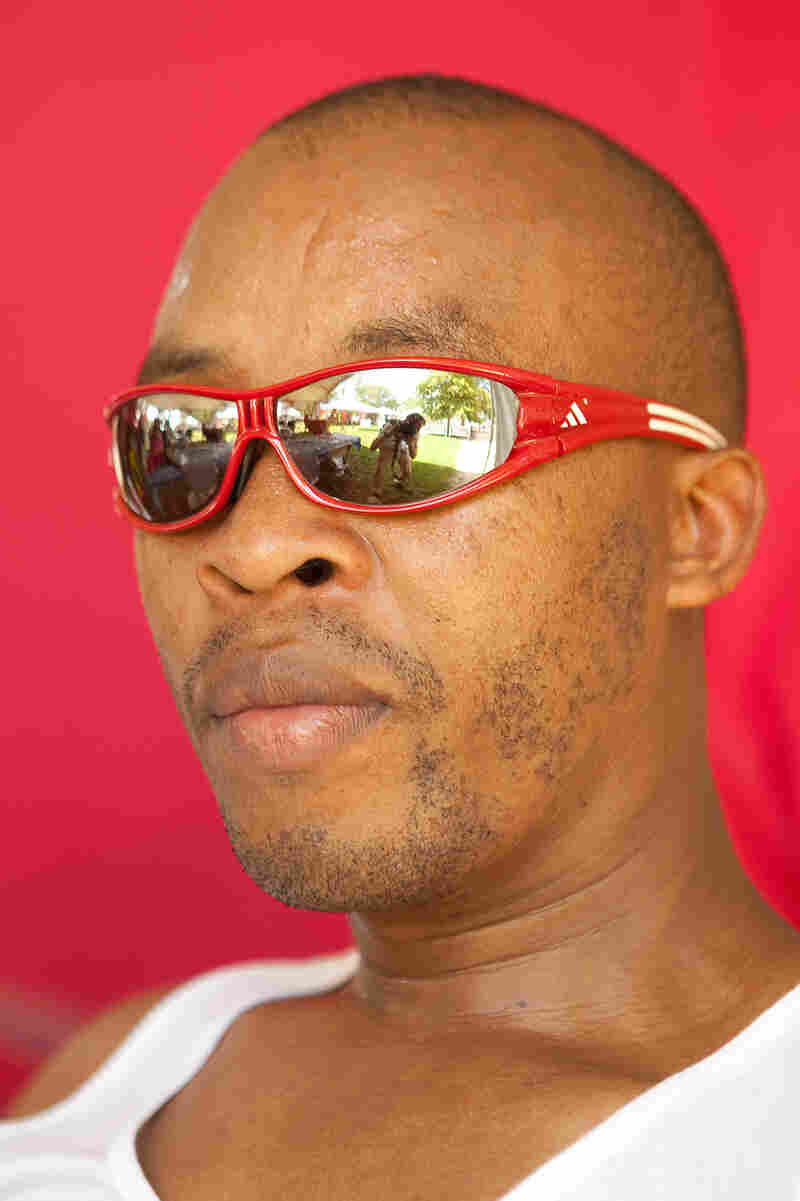 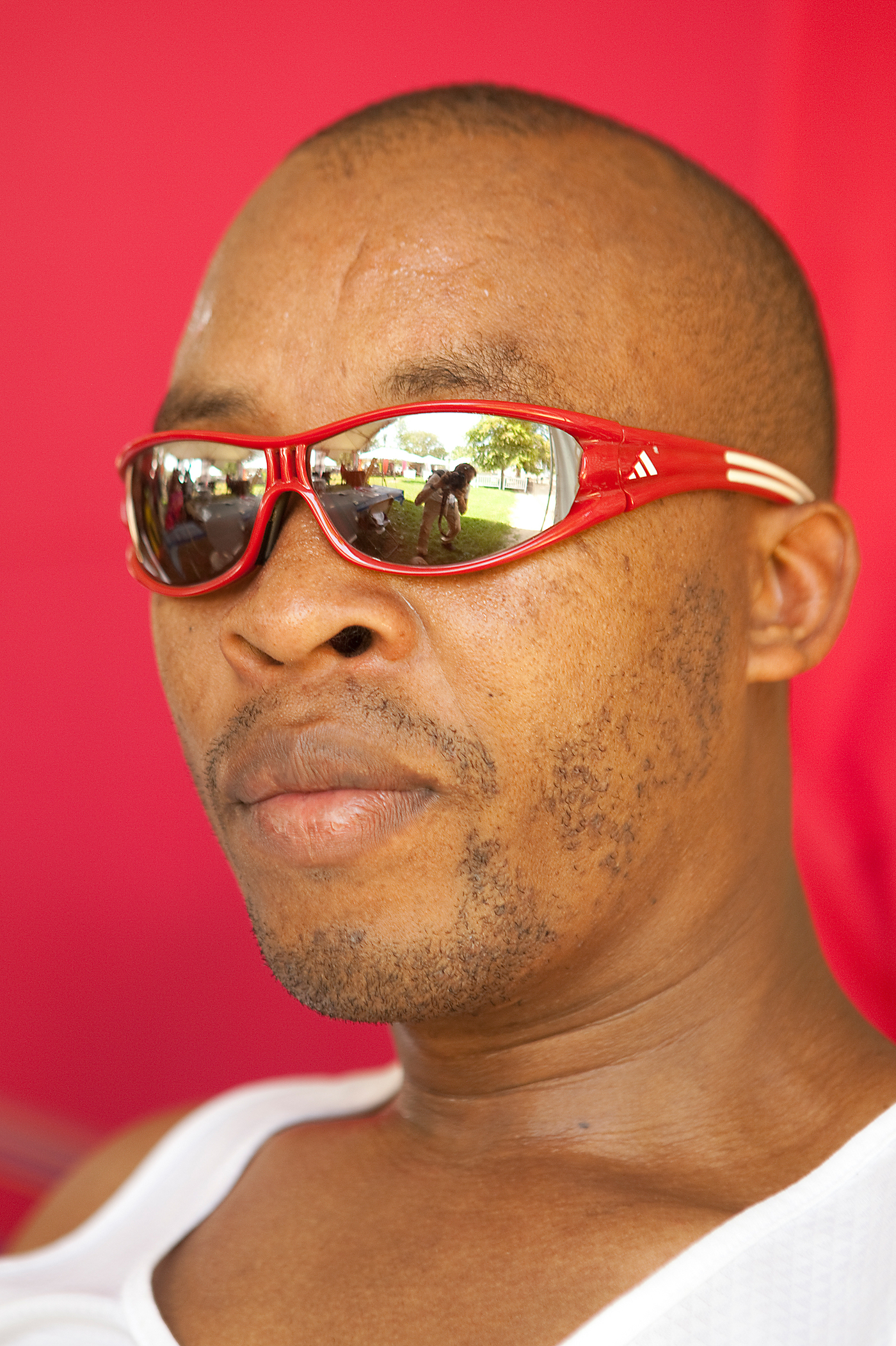 "Our message is that we need to work together. We can achieve more with combined effort," Wanyoike says, just after leading a group fun run at the Smithsonian Folklife Festival in Washington, D.C., last month. He and Kibunja were part of the Kenyan delegation showcasing their culture to visitors on the National Mall.

The power of Wanyoike's story, says Kenyan singer Linda Muthama, has made him one of the most beloved people in the country. She even sings a song about him: "He dreamed, he overcame."

The dream of many young Kenyans is to become a professional athlete. Running or soccer can provide enough income to take care of a family, even a community. But running isn't just for the pros, Wanyoike believes.

"A marathon is quite hard. So if you can do a marathon, and then get another job to do, you'll do it even better," Wanyoike says.

He's established the Henry Wanyoike Foundation, which organizes a number of programs to reach out to young people, both disabled and not. "We use sports, especially running, to bring communities together," Wanyoike explains. "You might come from a humble background, but there are opportunities." By focusing on athletics, he adds, youth can learn "not to get into drugs and things that wouldn't be helpful."

The foundation's major annual event is the Hope for the Future 7.5K race, which attracts thousands of participants and raises funds to provide wheelchairs, walking sticks and scholarships for disabled students.

Wanyoike's dream is to develop a full-fledged sports academy, where students can train in any sport.

Athletic achievements are even more critical for anyone with a disability, adds Wanyoike, who knows firsthand how much running boosted his confidence. But both Wanyoike and Kibunja recognize that many disabled Kenyans aren't getting all the opportunities they should. 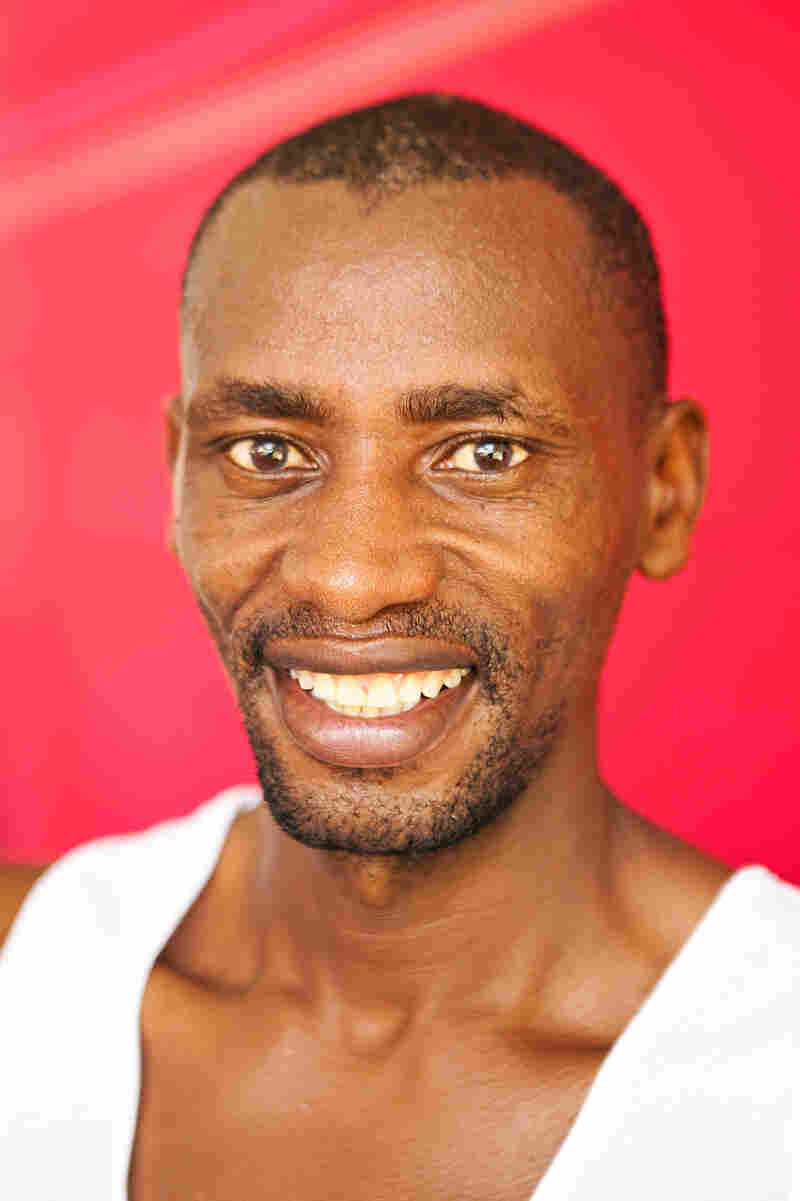 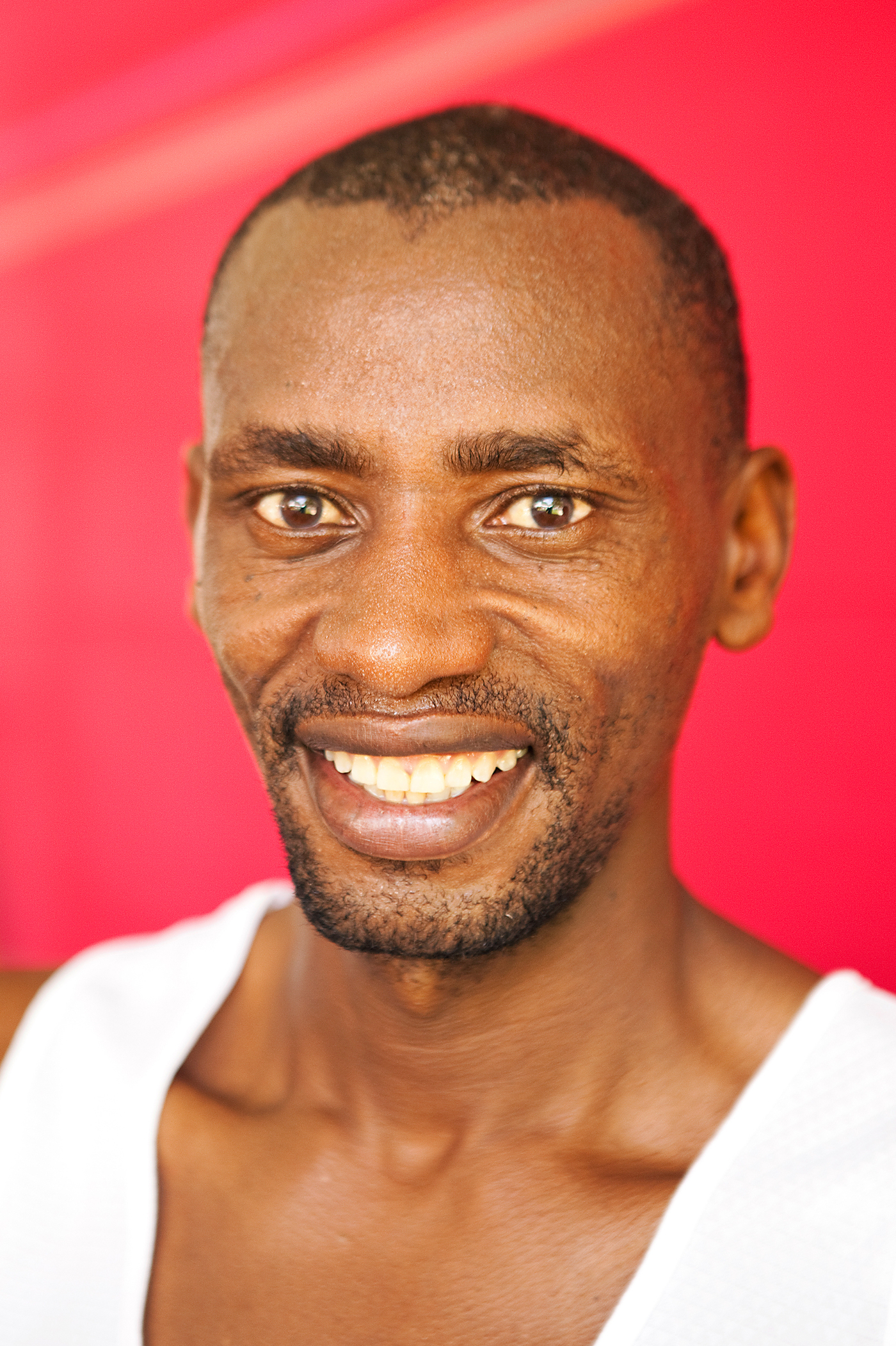 "Things for people with disabilities are very expensive," Kibunja says. That includes wheelchairs, which are also nearly impossible to fix ("The spare parts, you can't find them") and guide dogs (there are none). He'd also like to see Kenya build better infrastructure.

"Roads in the U.S. aren't bumpy," he marvels. "When it rains in Kenya, the road is slippery, and we have to stop training. Here the roads are smooth so you can run any time, any day."

Unfortunately, one thing Kenya has imported from the U.S. is an unhealthy lifestyle that's contributing to a growing obesity problem, Kibunja says. Kids in their small village ride buses to school now, and in Nairobi —20 kilometers away — hardly anyone walks anywhere, he added.

"The ways have changed. Diabetes and high blood pressure, so many people are suffering from these diseases," Wanyoike laments. "We used to have organic food — we got it from the garden. But now we are going to junk food."

Still, Wanyoike is optimistic for the future. The Kenyan government is encouraging more activity in schools and teaching people about proper nutrition, he says. He predicts that as the economy strengthens, conditions will improve.

Even at the age of 40, Wanyoike is certain he will improve. He and Kibunja look forward to breaking their own records at the Rio Paralympics in 2016. But there are many races to go before then. Up next, tomorrow's 5K Great City Race in London.