Accessibility links
Why A Village Leader Ordered The Rape Of A 14-Year-Old In India : Goats and Soda Rape is illegal in India. But history and tradition make it hard to enforce the law. And in remote parts, rape of a female relative is still considered fair punishment for a man's crimes. 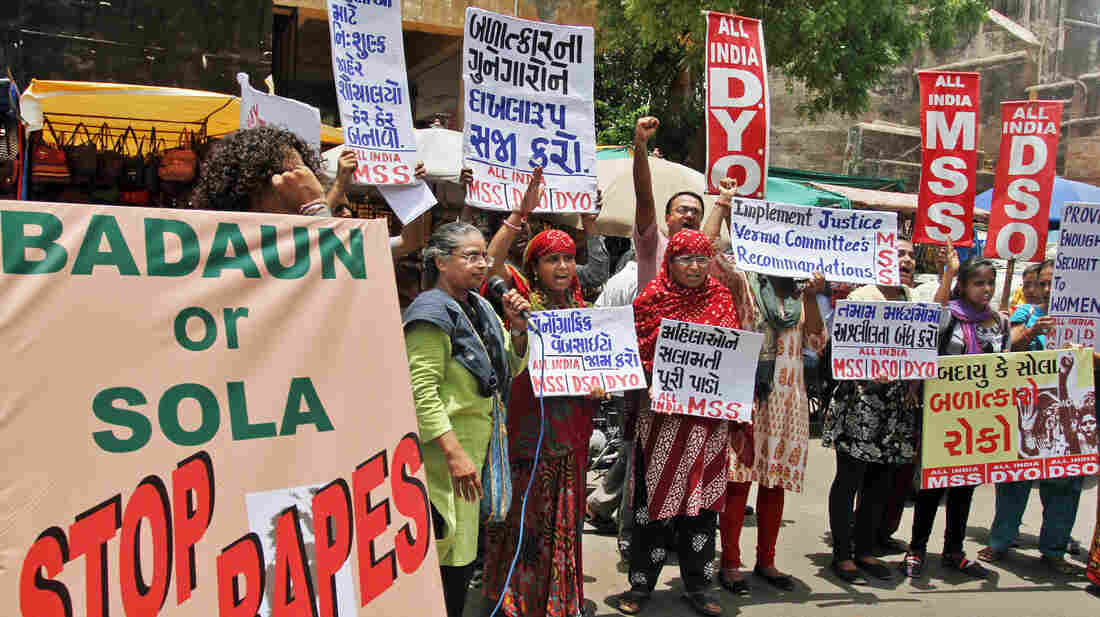 Last week, a young man from a remote village in the eastern Indian state of Jharkhand was accused of sexually assaulting a married woman. To punish him, the village leader reportedly ordered the rape of his 14-year-old sister. The husband of the woman who was allegedly assaulted was told to carry out the rape.

As the woman's husband dragged the girl to a nearby forest, villagers only looked on, her family told The New York Times.

It's the latest case of sexual violence against women out of India, and it comes only months after a West Bengal village reportedly ordered the gang rape of a 20-year-old woman for "falling in love" with a man from another community. It also comes almost exactly a year after a 24-year-old woman was gang-raped as punishment for her brother's act of adultery.

In all three cases, unelected village leaders and councils that rule rural parts of India ordered the sentences despite national laws that prohibit such "eye-for-an-eye" punishment against women. But these leaders often operate outside the law.

The use of rape as a punishment has a long history. Sexual violence against women has been a part of warfare and military occupation, says Kavita Krishnan, secretary of the All India Progressive Women's Association.

Rape is, in fact, illegal in India (except for marital rape). But history and tradition make the law hard to enforce.

In remote and rural parts, patriarchal views on gender still hold sway, and sexual assault is an unofficially accepted form of punishment.

Sexual violence against women and "revenge rape" are deeply entrenched in rural villages, says Krishnan. Women represent the "honor" of their community and are viewed as family or community property.

That means rape isn't considered an assault on the woman herself but a blow to the men she "belongs" to. The father suffers because the daughter is no longer pure, so according to tradition, no family would accept her as a bride. If the woman is already married, her rape would strip the husband of his honor.

"If you want to hurt the husband or hurt the father, or hurt the community, then you rape the woman to say, 'All right, I'm soiling your goods,' " Krishnan says.

The country's tradition of revering women as "gold" and "goddesses" is just as problematic, Krishnan says.

"It's so easy to say we respect woman as being precious, like gold, but you know, gold is actually a piece of property," she says. Such thinking allows society to justify locking a woman in her home as the only way to "keep gold safe."

And while some may think it's flattering, treating women as goddesses means they're expected to behave differently. "If a woman doesn't behave as a very pure goddess — if she's challenging the modern norms of society — the violence and sexual violence that happens to her is not seen as a crime," she says.

Despite the challenges, India has made some progress. Various women's rights movements and protests in the past three decades have started to create a shift in the thinking on rape — less as a crime against men's honor and more as one against the "bodily integrity" of women.

But Krishnan says she'd like to see more effort from the government. Following the high-profile rape of a New Delhi woman in December, courts changed the rape laws to allow for capital punishment in cases that cause death or leave the victim in a vegetative state. Repeat offenders can face death sentences. But that isn't enough, she told NPR last year, saying that underlying issues of gender inequality are still being ignored.

And you can't think of rape as just India's problem, she stresses. One of the biggest signs of progress, Krishnan says, is a willingness to talk about rape cases not as isolated incidents but as part of a larger problem for patriarchal societies around the world.