Accessibility links
Fake Cures For AIDS Have A Long And Dreadful History : Goats and Soda The latest claim was made in Egypt: Electromagnetism can detect the virus and "the Complete Cure Device" can wipe it out. It's not the first false promise — and probably not the last. 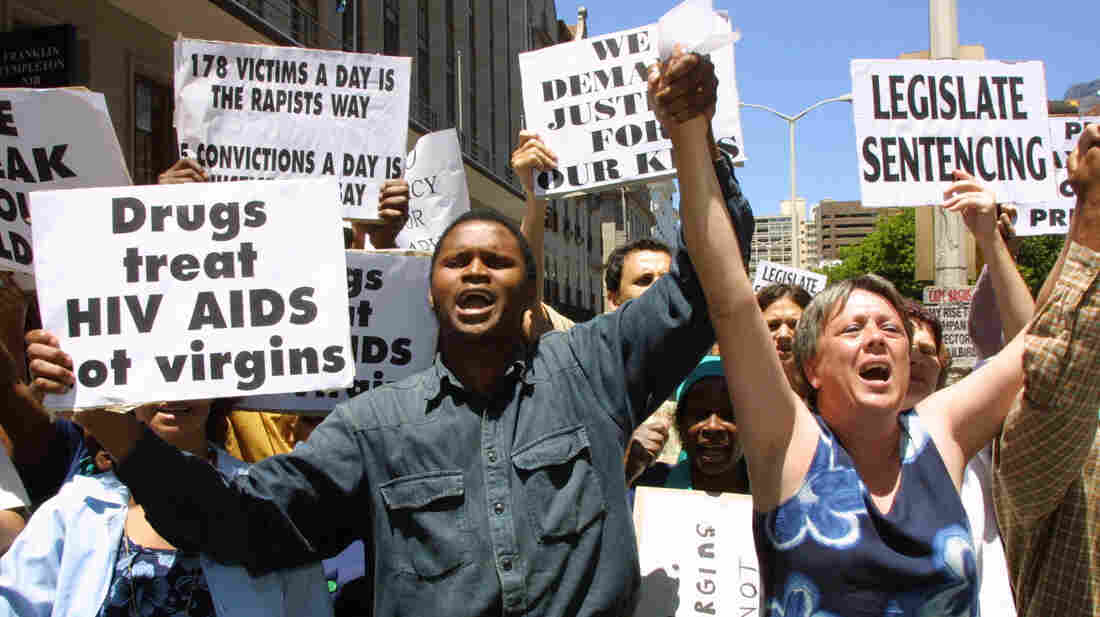 Over a decade ago, rumors spread in South Africa that sex with a virgin could cure HIV/AIDS. In 2001, 150 people gathered in Cape Town to protest the rape of children and even babies, allegedly as a result of belief in this canard. Anna Zieminski/AFP/Getty Images hide caption 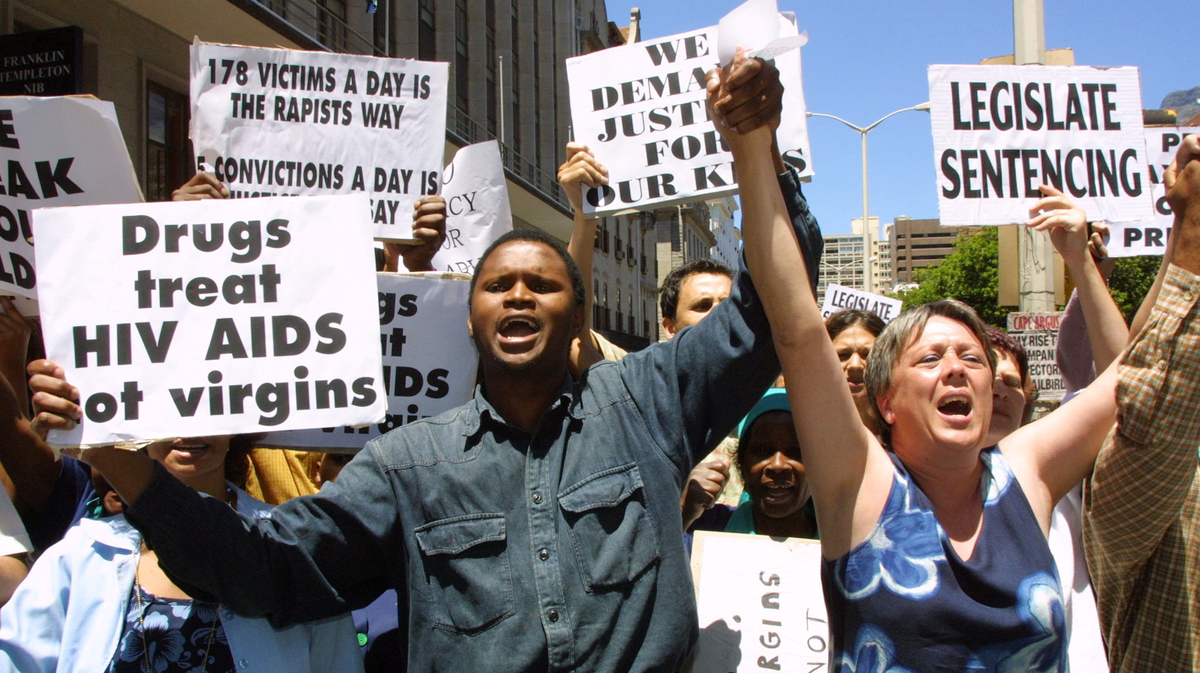 Over a decade ago, rumors spread in South Africa that sex with a virgin could cure HIV/AIDS. In 2001, 150 people gathered in Cape Town to protest the rape of children and even babies, allegedly as a result of belief in this canard. 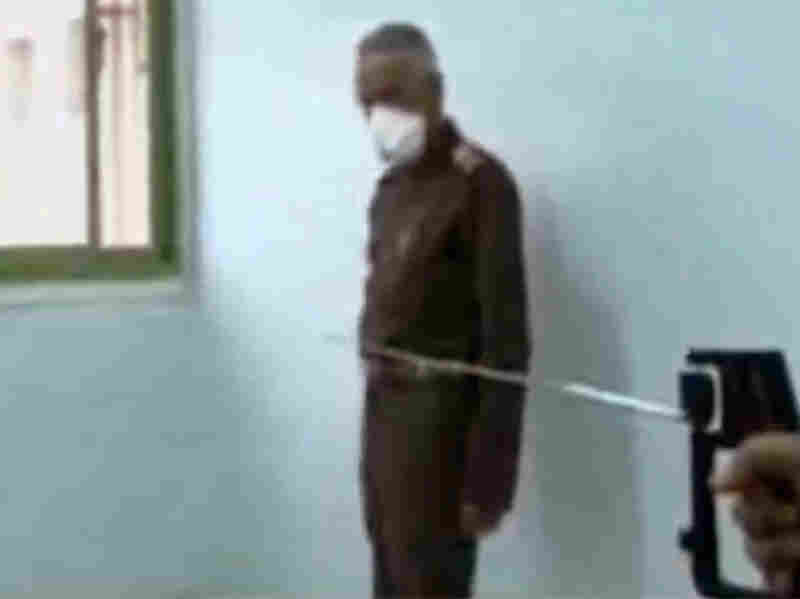 A broadcast on Egyptian State Television earlier this year showed a device that the army said could detect and cure AIDS and hepatitis. AP hide caption 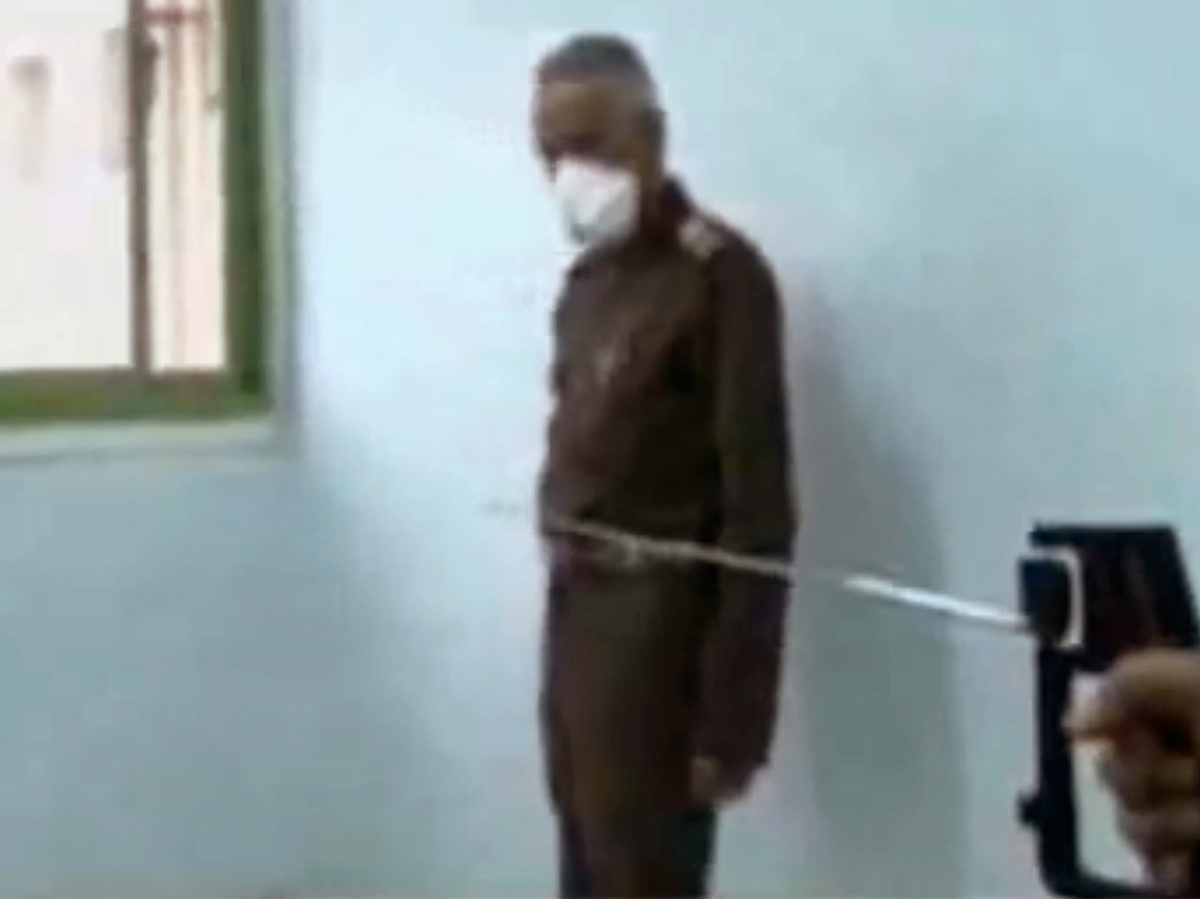 A broadcast on Egyptian State Television earlier this year showed a device that the army said could detect and cure AIDS and hepatitis.

Electromagnetism can detect AIDS. The "Complete Cure Device" can wipe out the virus.

The Egyptian military made those claims earlier this year, but now they have backtracked after the announcement was widely denounced by scientists, including Egypt's own science adviser.

The Complete Cure Device is just one more false promise in the ongoing fight against AIDS. It is a reminder, too, that for 15 years, beginning in the early 1980s, AIDS was a slaughter, shrouded in mystery, of people in the prime of their lives.

Then came a breakthrough in 1996: A combination of drugs could control the virus, allowing infected people to live long and productive lives. Today, antiretroviral treatment for HIV and AIDS is widely available. An outright cure still eludes scientists, but the once deadly disease has become manageable.

So any claim for an unproven cure, offering hope that could deter patients from effective treatment, is cruel. But myths, false claims and outright fraud have persisted in the AIDS epidemic.

The bogus theories of Peter Duesberg, a professor of biochemistry at the University of California, Berkeley, were responsible for a global setback to HIV treatment. Duesberg argued that combinations of drug use and promiscuous behavior caused the virus, and passed his advice on to South African health officials in 2000.

"The biggest disaster imposed on us was Duesberg with his statements that HIV did not cause AIDS," says Max Essex, chairman of the Harvard School of Public Health AIDS Initiative. Essex has been conducting research on AIDS since 1983, including field research in Botswana and Southern Africa.

Between 2000 and 2005, as neighboring African countries were ramping up HIV prevention programs, South Africa stubbornly stuck to the notion that HIV was not the cause of AIDS. "I think Duesberg played the biggest role in giving [former South African President Thabo Mbeki] a convenient excuse to avoid supplying drugs," says Essex.

Researchers including Essex examined the human toll of those lost years of treatment. Their results, published in 2008 in the Journal of Acquired Immune Deficiency Syndrome, estimated that 330,000 South African adults died because of lack of treatment, and 35,000 infants were born with HIV.

If that was the biggest disaster, no doubt the cruelest of the AIDS false cure claims was the virgin cleansing myth that took hold in sub-Saharan Africa, as well as parts of India and Thailand. Some men believed they could be cured of AIDS by having sex with a virgin. That reportedly led to the rape of younger and younger girls — even babies, by some accounts.

Other unproven AIDS "cures" have kept people from seeking life-saving treatments: herbal remedies, potions to rub into the skin, chemicals like Virodene (derived from an industrial solvent), oxygen therapy and electronic zappers.

There is still much work to be done to prevent HIV infection, to develop a vaccine, to further improve drug treatment and to prevent other chronic diseases like cancer and heart disease in people with AIDS who are living longer.

And despite the spectacular scams, there have also been spectacular successes in hard-hit areas. For example, in the 1990s, Botswana had the highest rate of HIV infection in the world. Today, almost all of the country's patients seek treatment; by contrast only half of Americans infected with HIV get treatment, according to the Centers for Disease Control and Prevention.

"Today, the number of people in Botswana on successful therapy who will live almost normal lives is 90 percent of HIV-infected people," says Essex. In that respect, Botswana is No. 1 in the world.