Accessibility links
Dogs Carry Kissing Bug Disease In Texas And Latin America : Goats and Soda From shelter mutts to show dogs, Texas canines are getting a parasite that causes heart problems in people. Dogs don't spread the parasite directly to humans. But they help to make it more prevalent. 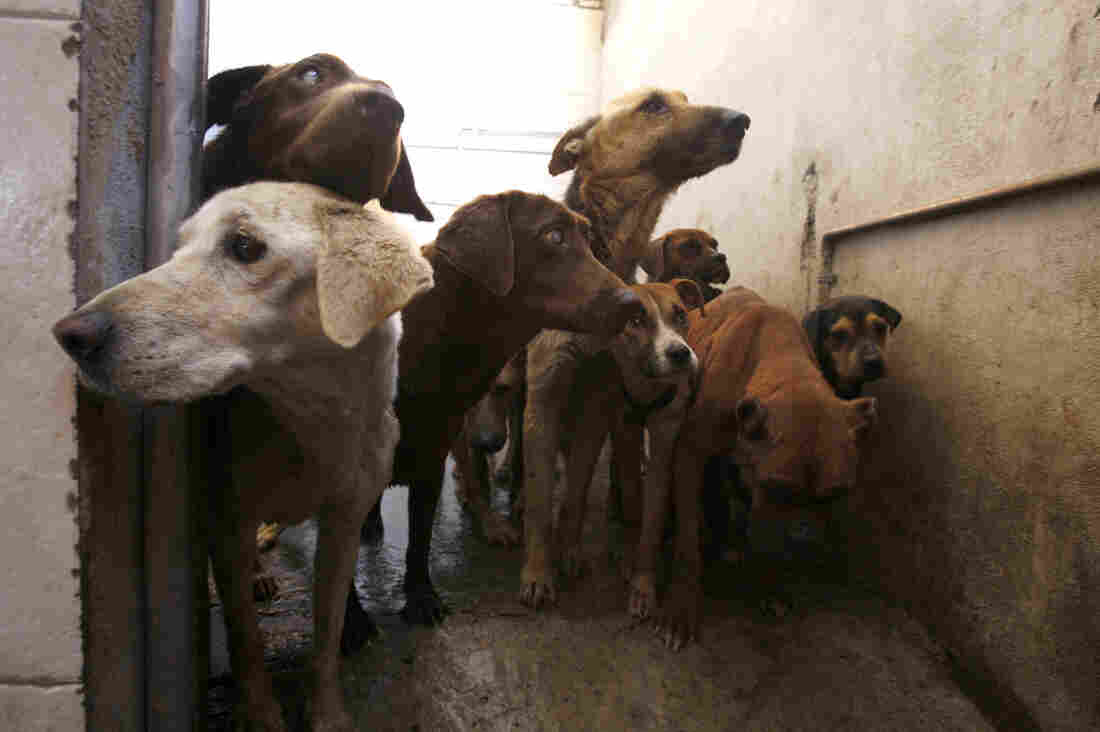 Dogs throughout Latin America carry the Chagas parasite — and boost the risk of people catching it. And it's not just shelter dogs, like these in Mexico, who are at risk. Even family dogs get the deadly disease. Jose Luis Gonzalez /Reuters/Landov hide caption 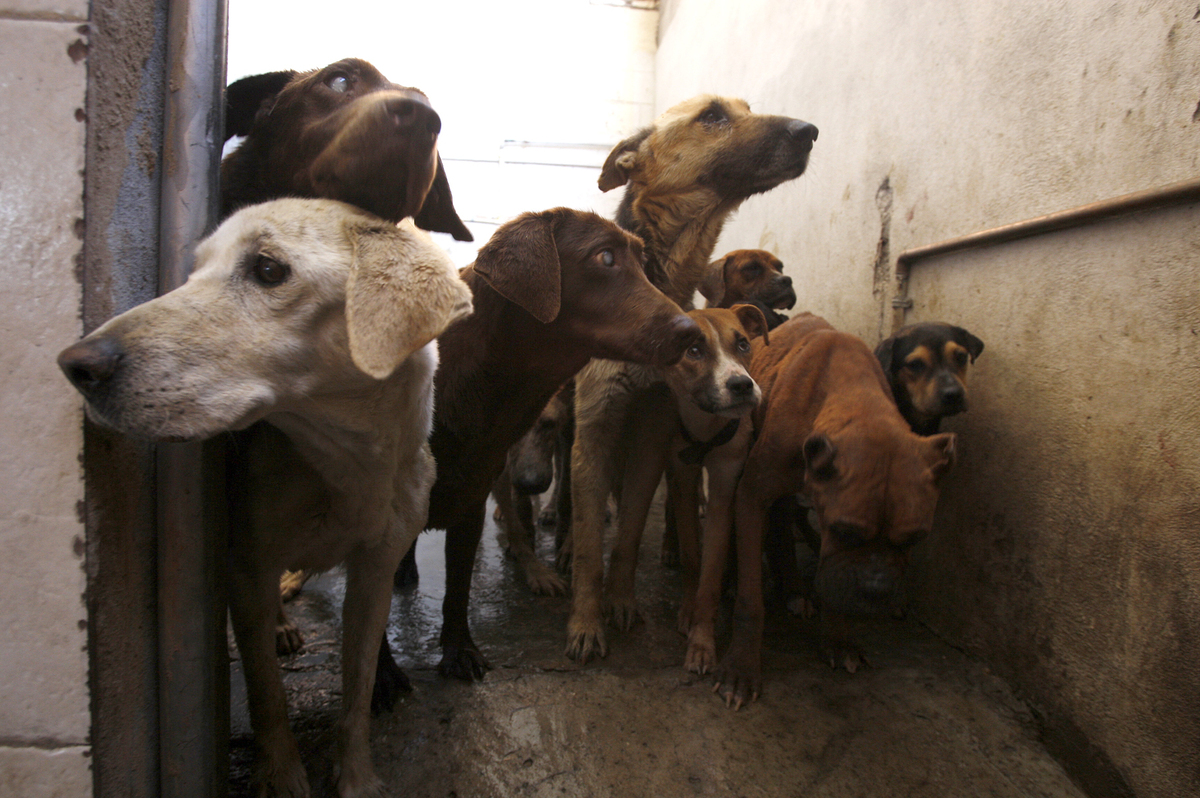 Dogs throughout Latin America carry the Chagas parasite — and boost the risk of people catching it. And it's not just shelter dogs, like these in Mexico, who are at risk. Even family dogs get the deadly disease.

We often think about people spreading diseases around the world. This spring, vacationers brought chikungunya from the Caribbean to the United States. Businessmen have likely spread Ebola across international borders in West Africa. And health care workers have carried a new virus from the Middle East to Asia and Europe.

But what about (wo)man's best friend?

From shelter mutts to purebred show dogs, canines across the state of Texas are becoming infected with a parasite that causes a potentially deadly disease in people, scientists report Wednesday in the journal Emerging Infectious Diseases. 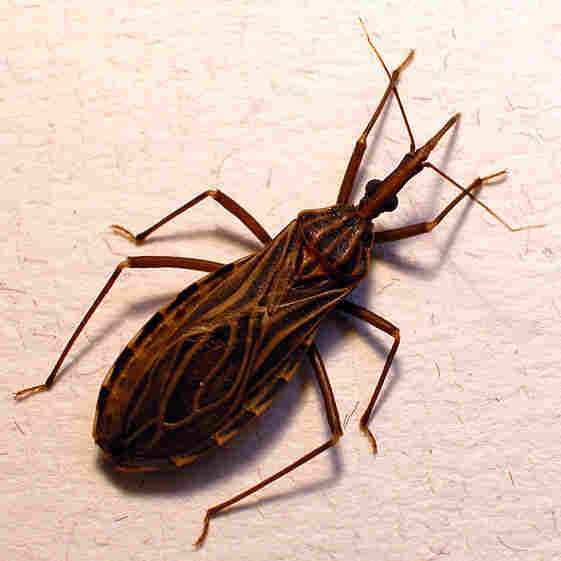 Don't let the name fool you. The kissing bug, or Rhodnius prolixus, isn't your friend. The insect transmits the Chagas parasite when it bites someone's face. Dr. Erwin Huebner/University of Manitoba hide caption 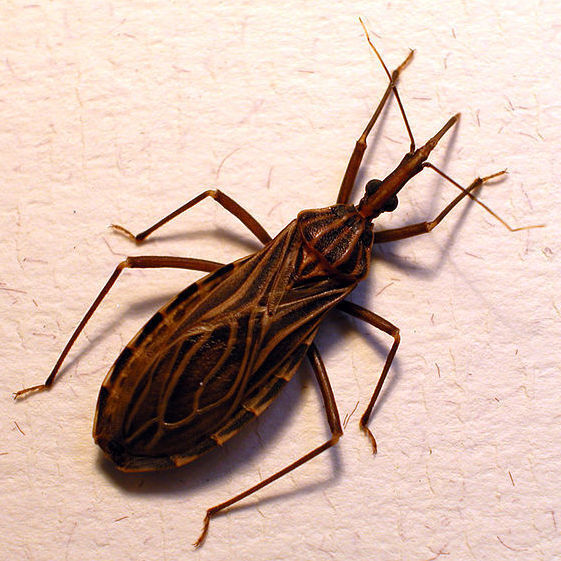 Don't let the name fool you. The kissing bug, or Rhodnius prolixus, isn't your friend. The insect transmits the Chagas parasite when it bites someone's face.

Although the dogs aren't spreading the parasite directly to people, they are helping to make the disease more prevalent in the southern U.S. (Not to mention the parasite can make dogs sick and even kill them.)

The disease is called Chagas. And it's transmitted by an insect known as the kissing bug.

Don't let the name fool you. This isn't a friendly bug. The insect bites the faces and lips of sleeping people, then passes on the Chagas parasite through its fecal matter. (The parasite is a protist called Trypanosoma cruzi.)

About 300,000 people in the U.S. are infected with the Chagas parasite. Researchers have estimated that the disease cost the U.S. about $800 million each year in lost work time and medical bills.

Many people with Chagas' disease don't even know it. They have no symptoms. But for about a third of those infected, the parasite damages the heart or digestive tract. And there are no drugs to cure a chronic infection. So once the parasite takes up residency in somebody's tissue, it never leaves.

Most people with Chagas' disease in the U.S. likely caught it in Latin America, where about 8 million people are infected with the parasite.

But in the past decade, researchers have found evidence that Chagas' disease is spreading locally in Texas and around New Orleans. The new study in dogs points up how widespread the problem is, says microbiologist Nisha Jain, at the University of Texas, Medical Branch at Galveston.

"It shows that active transmission is going on in the U.S.," says Jain, who wasn't involved with this research. "Having infections in dogs in the U.S. serves a role in maintaining the infection cycle of Chagas' disease."

In the study, veterinarian Sarah Hamer and her team at Texas A&M tested 205 shelter dogs across Texas for signs of chronic Chagas infection. About 9 percent of the dogs, in every part of the state, tested positive.

"The study was just on shelter dogs," Hamer says. "But we're also looking at other dogs in Texas — working dogs, show dogs, you name it. They are all exposed to and have Chagas. It's common in dogs in Texas."

But the chances of a dog spreading the parasite to its owner is very low, Hamer says.

"The last thing we want to do is put a bad taste in people's mouths about shelter dogs," she says. "Shelter dogs are not posing a direct risk to humans."

Why? Because for the parasite to move from the dog to a person, it needs to go through the kissing bug. And the dog can pass the parasite to the bug only at the beginning of the infection.

So for a person to catch Chagas from their pooch, a kissing bug would have to bite the dog and then its owner right after the dog gets infected. "We don't have kissing bugs in our homes," Hamer says, "so the chance of that happening is small."

That's not the case in South and Central America. In many poor communities, kissing bugs live in the roofs of thatched and mud homes. Scientists in Argentina have found that having a dog or two in the family greatly boosts your chance of getting Chagas' disease, Jain says.

"There's been a lot of research on this question in Argentina," she say. "When the dogs live around the house, they are certainly important for spreading the disease there. The dogs harbor the parasites and serve as a source for humans infections."