Accessibility links
Feeling The Heat, Burning The Suits: Reporting On Ebola From Sierra Leone : Goats and Soda The Ebola treatment center in Kailahun is the largest ever built, with 64 beds. A visit reveals the toll on the staff — and how much of the Ebola-fighting budget literally goes up in smoke. 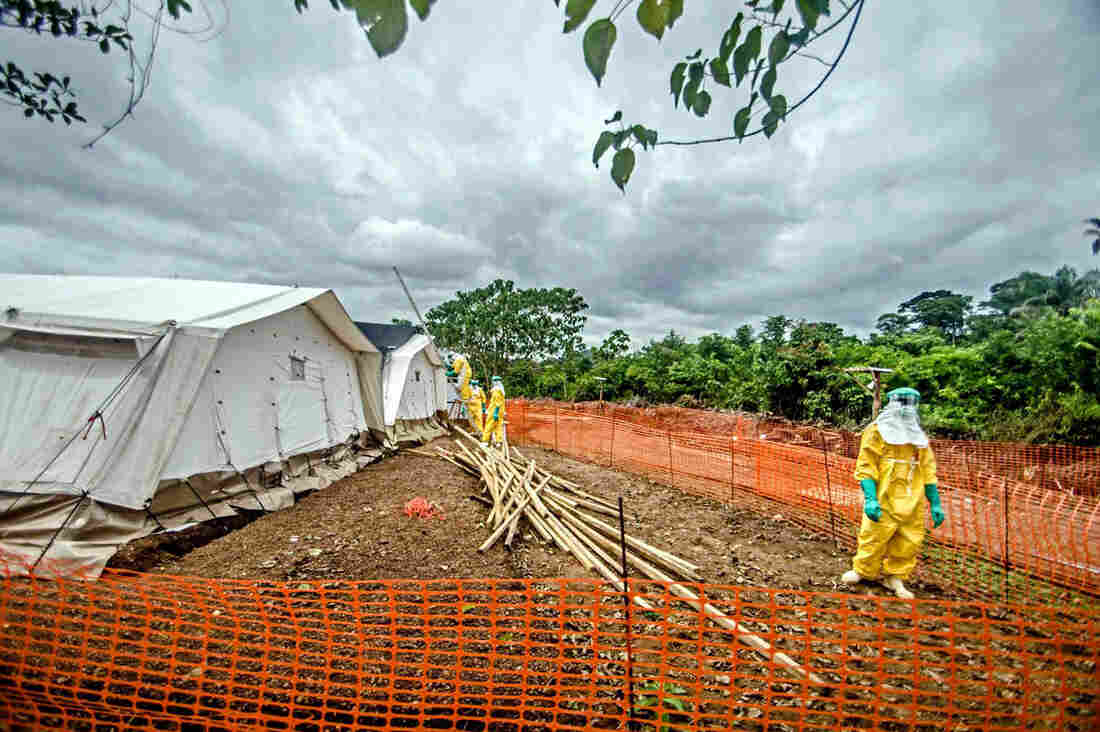 Construction workers repair the roof inside the isolation area at the Doctors Without Borders treatment center in Kailahun. Tommy Trenchard for NPR hide caption 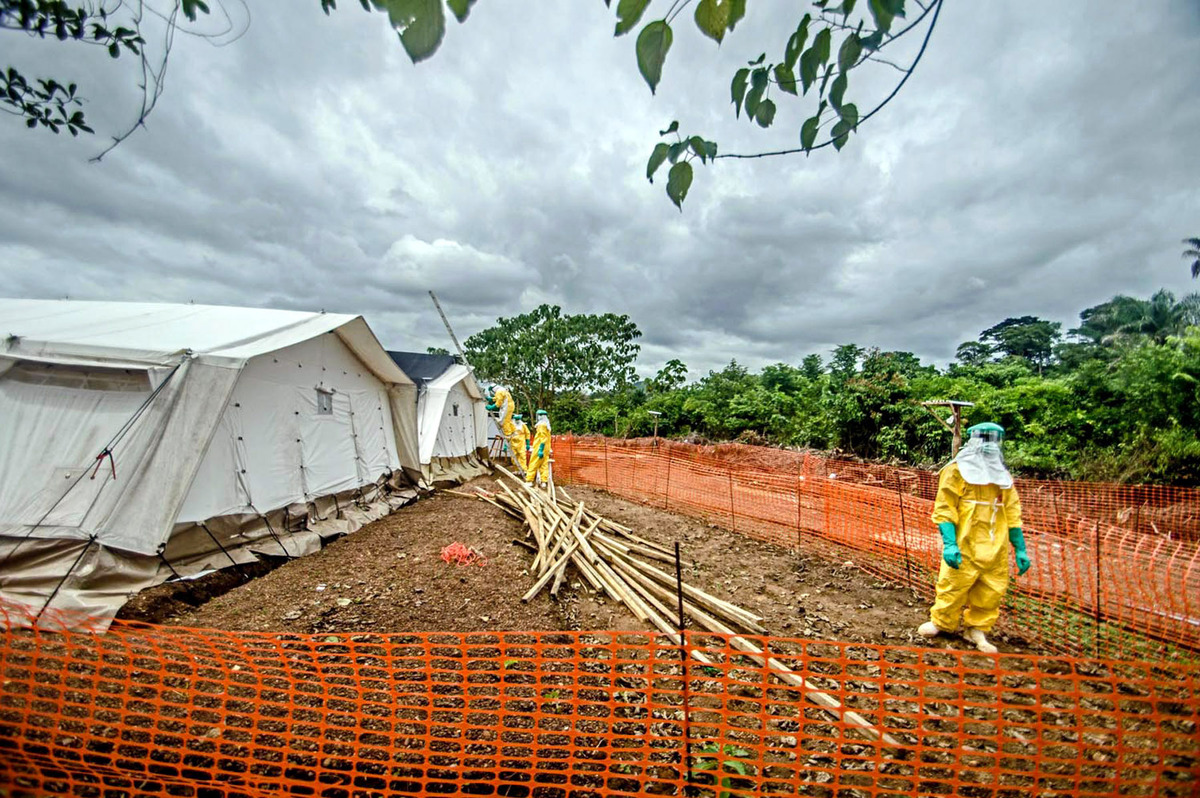 Construction workers repair the roof inside the isolation area at the Doctors Without Borders treatment center in Kailahun.

NPR's Jason Beaubien is in Sierra Leone, covering the Ebola outbreak that began in March in Guinea and has spread to neighboring countries. When we spoke Thursday, he had just toured the treatment center built by Doctors Without Borders in the town of Kailahun. With 64 beds, it's the largest Ebola isolation ward ever built. Currently there are 31 patients.

Can you describe the treatment center?

It's basically a compound with a series of different tents. There are tents where people get suited up to go in. Another tent seems to be for storage, and one of the tents contains a lab. Then there's a double fence about 3 1/2 feet high, made of orange plastic mesh. They designed the fence so people can see where the patients are, so it wouldn't seem as if the patients are completely walled off.

Why a double fence?

So no one can get within 6 feet of someone who has Ebola. In case a patient from the isolation area reaches out or vomits, [Doctors Without Borders] wants to make sure there won't be any accidental contamination. 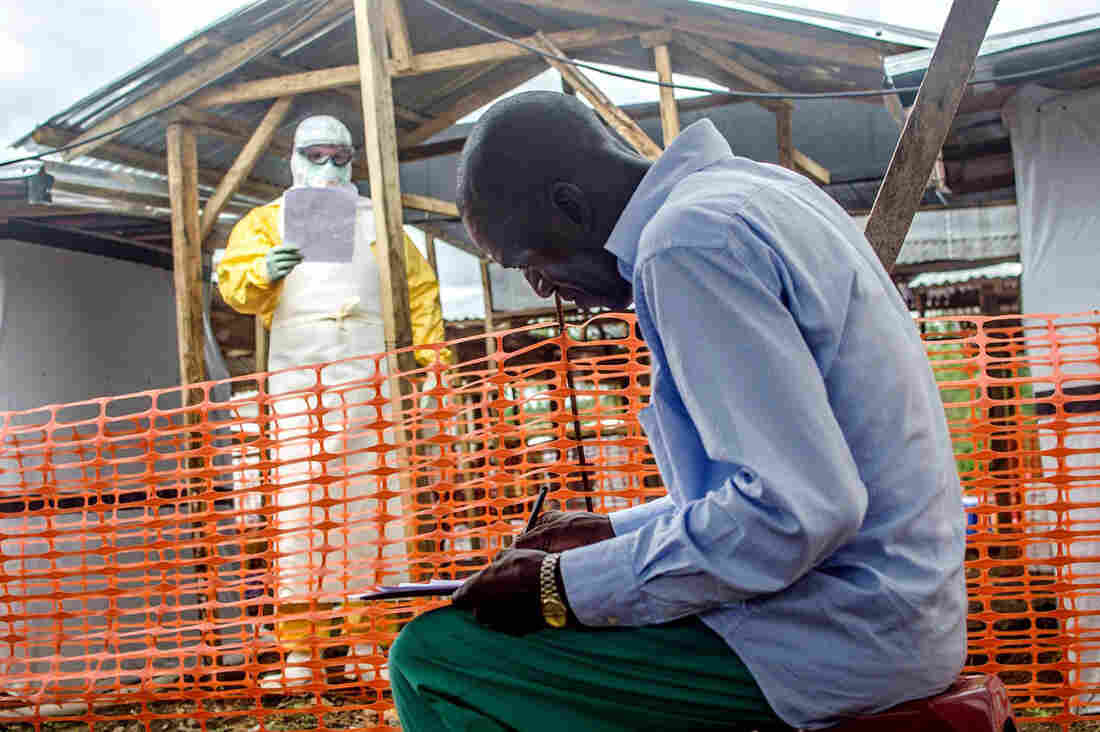 A health worker shouts out details about a case from inside the fence around the isolation area at the Kailahun treatment center. A colleague outside the fence writes them on the patient's chart. Tommy Trenchard for NPR hide caption 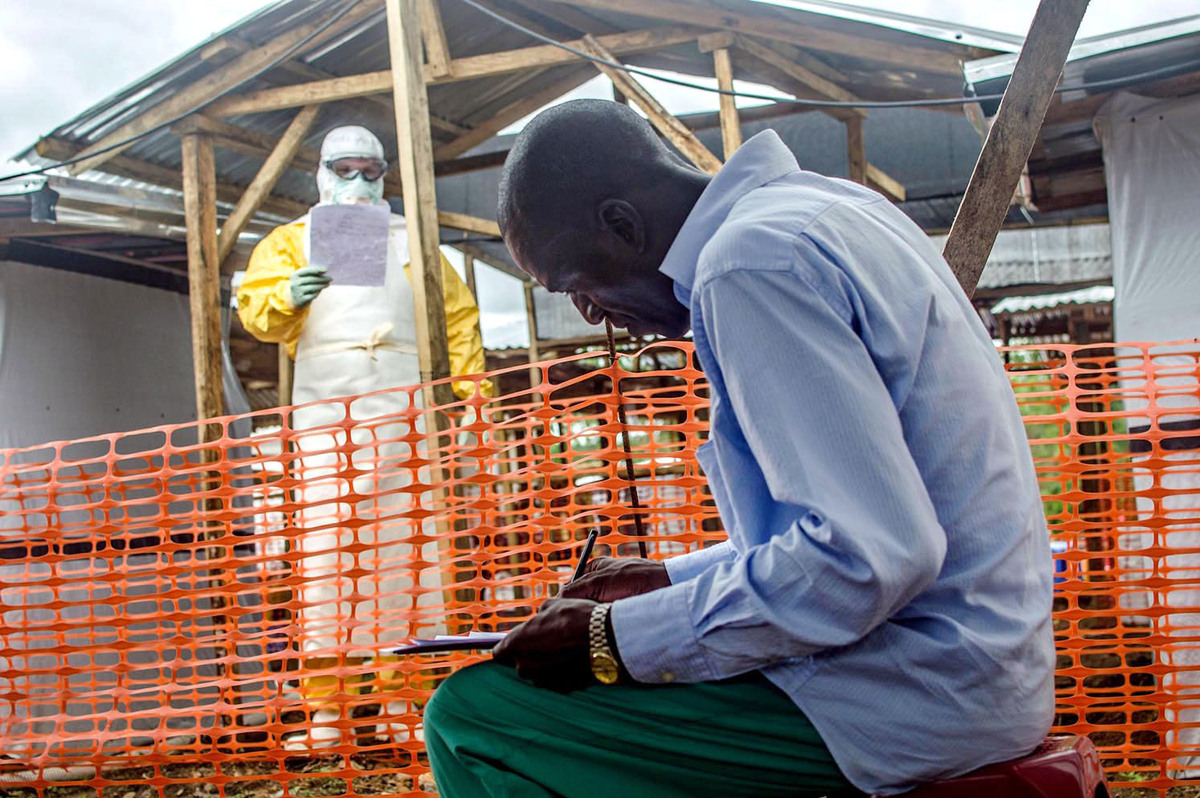 A health worker shouts out details about a case from inside the fence around the isolation area at the Kailahun treatment center. A colleague outside the fence writes them on the patient's chart.

How do the doctors record information on the patients?

Doctors go into the isolation area completely suited up, do their rounds and write down what's happening with patients. Then they stand next to the fence and shout out to people on the other side of the fence [information about each patient]. Say, for patient 105, the doctor says, "diarrhea, vomiting." Then the doctor's notes [made inside the isolation area] are burned.

Where do they burn the notes?

They have a big pit in the back.

What else do they burn?

They burn everything. They say nothing comes out of isolation — although obviously they're taking blood samples out. People come out. They strip off their protective gear, the Tyvek suits they put over their entire body and shoes.

When they get suited up, you do not see a bit of skin as they're going in. There are multiple layers of gloves, goggles, a mask. As they're coming out all that stuff gets stripped off. Some things like rubber aprons and boots are disinfected and reused. But they burn the whole suit. A suit costs about 60 euros [about $80], and they use 70 or 80 suits a day.

What are the suits made of?

A cloth similar to a painter's suit. But I assume it's a little more rugged.

What do you know about the isolation area?

There are about nine tents inside, with patients separated by whether they are suspect, probable or confirmed cases. And there's a morgue made of rough wooden two-by-fours, wrapped in a gray tarp with a tin roof.

How do the health care workers seem when they come out of the isolation area?

Because they are completely covered, when they come out, they are dripping in sweat and pretty exhausted. 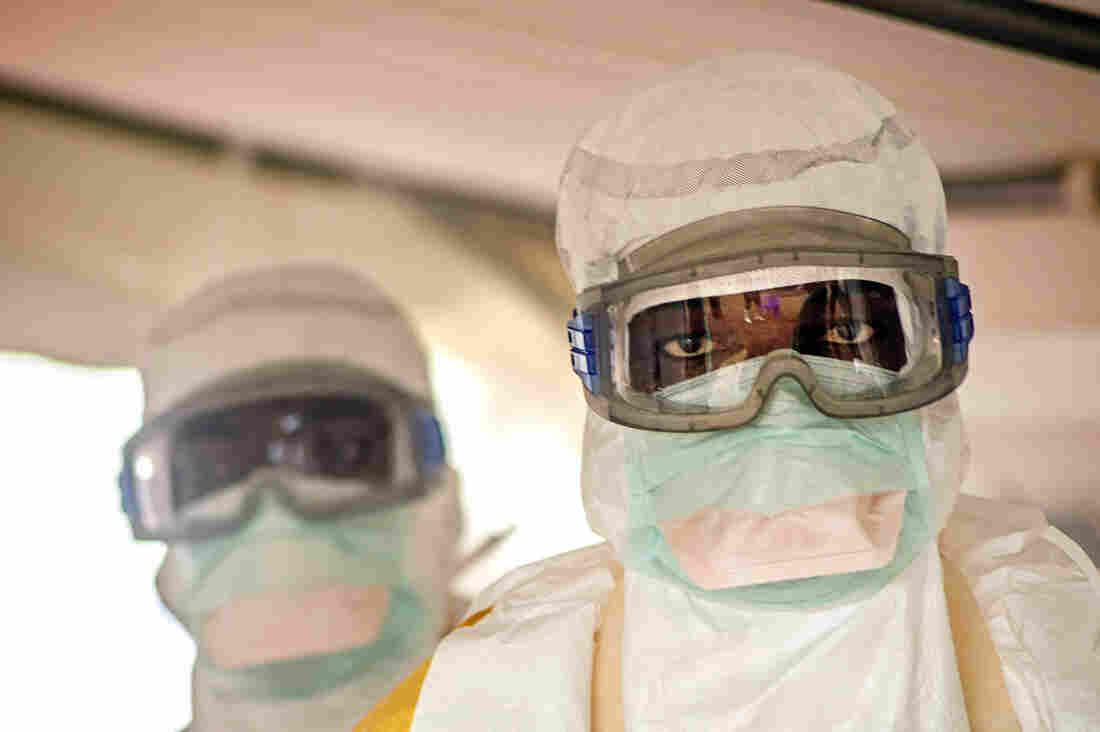 All workers in the isolation area must wear a head-to-toe protective suit. Tommy Trenchard for NPR hide caption 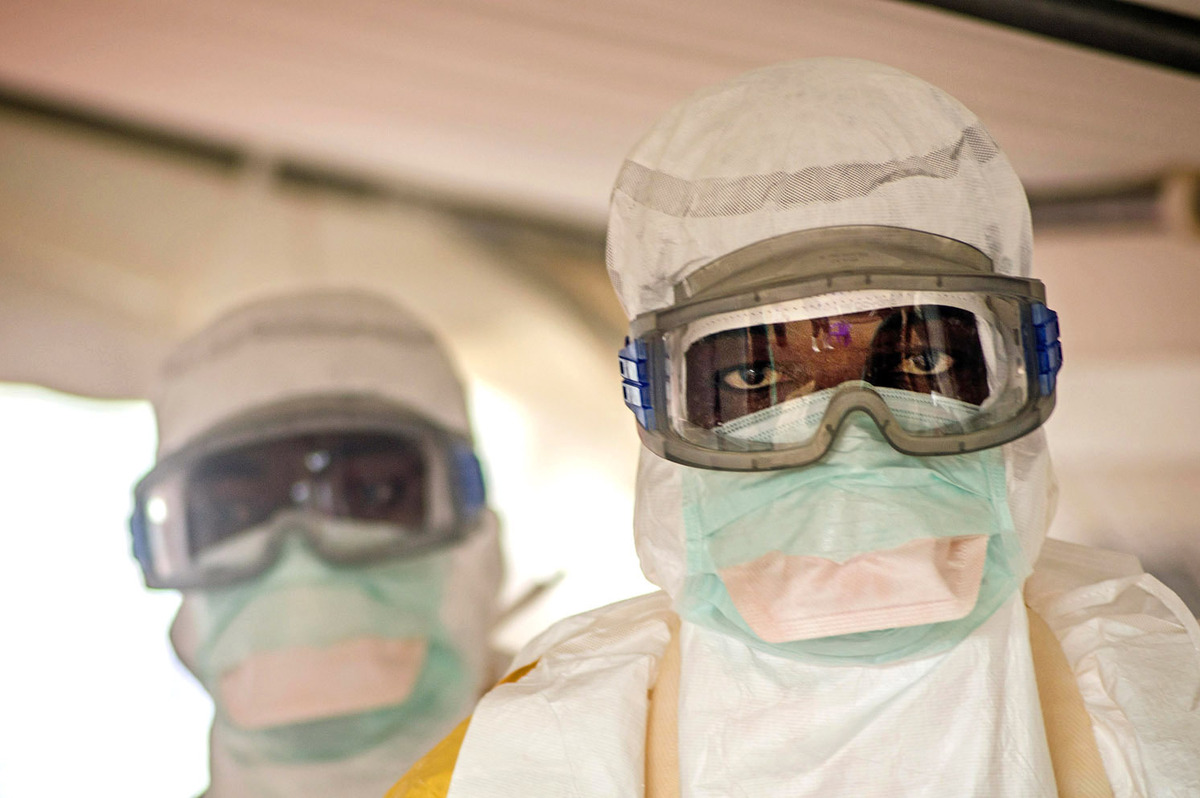 All workers in the isolation area must wear a head-to-toe protective suit.

How hot is it?

The temperature varies. When it's overcast, it's in the high 70s or low 80s. But as soon as the sky clears, temperatures shoot up into the 90s, and it gets quite hot. But it's the rainy season, and we're getting a fair amount of relief from the intense sun with rainstorms that come in.

How do they keep the patients cool?

That's a bit of a problem. Construction workers are going into the treatment area to put up black netting so the patients have places to sit in the shade. The construction workers suit up in personal protective equipment. They take their hammers and saws in and have to leave the tools there. In this sun, the workers can't be there very long. As soon as they come out [of the isolation area] they have to take off this suit that costs 60 euros, which gets burned. Then they're sent back in in another suit.

There have been intense storms, like sheets of water dumping down, and the storms rip the shade structures they're trying to put up. So the workers have to go back to repair them.

Is it dificult to find people who will work in the isolation area?

It is. Some people don't want to work there because their families are terrified of infection. Families will sometimes tell them not to come home. They have to pay people incentives, especially people they're sending in to clean up the wards, the vomit, the diarrhea.

Death, Sex And A Glimmer Of Hope: Reporting On Ebola From Sierra Leone

Did you go in the isolation area?

Doctors Without Borders wouldn't allow me in. That's their policy. And quite frankly, I'm fine with that.