Accessibility links
This Aspiring Astronaut Might Be The World's Most Amazing Teen : Goats and Soda He lived in a village in Tanzania. He dreamed of being an astronaut. Now he's studying in a Florida flight academy — and hoping his secret potato salad recipe will bring support to pay the tuition.

At age 7, Gideon Gidori knew exactly what he wanted to be: a rocket ship pilot.

The only thing was, he was living in a tiny Tanzanian village where his school only went through grade six and books about space (or, for that matter, any books) were scarce.

But that didn't stop him. Now 15, Gidori is determined to become Tanzania's very first astronaut.

Gidori has always been fascinated with stars and spent his boyhood nights staring at the clear skies above his hometown. "I think there is much more up there than there is down here, and I want to know what that is," he says. When he becomes an astronaut, he hopes his first stop will be the moon — one of Jupiter's moons, that is.

"They say that on Europa, there's life," he says. "I want to be part of the crew that investigates it."

With the help of Epic Change, his dream isn't just wishful thinking. The nonprofit, which raises money for education and technology, gave him a scholarship to study in the U.S. This May, Gidori completed his first year of flight-training school at Florida Air Academy.

To finance his next school year, he's using the allure of potato salad. Tanzanian astronaut potato salad, to be exact. 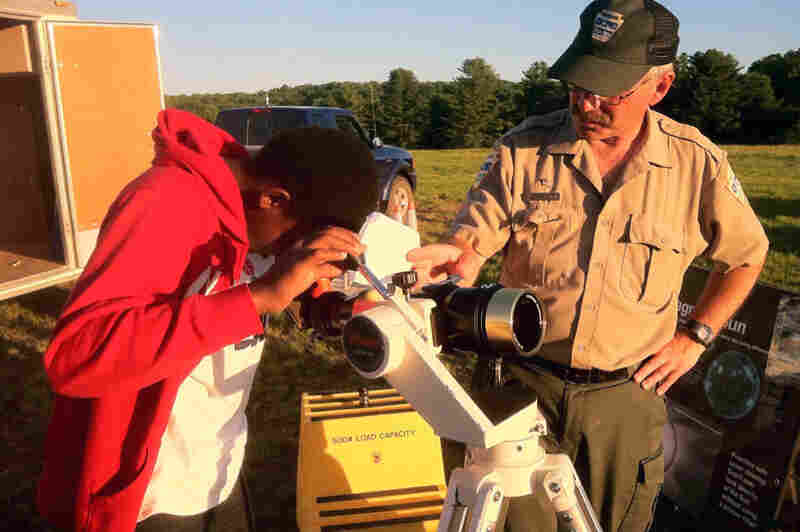 A telescope with a special filter gives Gidori a view of the sun. Courtesy of Sanjay Patel hide caption 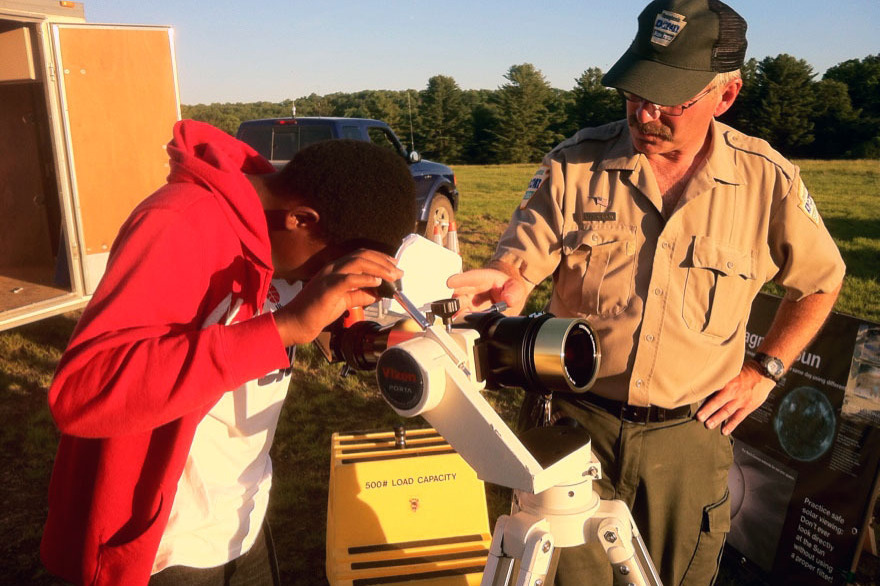 A telescope with a special filter gives Gidori a view of the sun.

Inspired by the entrepreneur who raised more than $60,000 to make potato salad on Kickstarter, Gidori and his host family — Epic Change co-founders Sanjay Patel and Stacey Monk — are using the online platform to raise $35,000 to cover tuition and fees for next year. On their Kickstarter page, the trio has promised to throw the "greatest potato salad party in Tanzanian history" the day Gidori lifts off into space for the first time.

And the Tanzanian teen means it; he already has an experimental recipe in the works. As of July 22, a little more than $12,000 has been raised on Kickstarter and Rally.org.

Patel says Gidori was a precocious kid, even when they first met in 2007. Patel and Monk were in his village to help a teacher expand the primary school and build a secondary one.

He did well at school, despite the limited resources. Because there was only one textbook for the entire class, lessons often consisted of copying notes from the board and memorizing them. Outside of school, Gidori says he went from library to library, reading the few books they had on space, science and astronauts.

He also learned how to be resourceful. Take soccer, for example. "Back at home, if you didn't have a ball, you would literally take plastic bags, paper and socks to make one," he says. "Nothing would stop them from playing."

And nothing will stop him from pursuing his extraterrestrial goal. "Just watching him grow, I have no doubt in my mind that that's what he's going to be," Patel says.

Last summer, Monk pulled Gidori out of class and delivered the piece of news that put him a giant leap closer to Jupiter's moon. Florida Air Academy had accepted him, and Epic Change had awarded him a scholarship to cover part of his costs.

"It was so amazing that I couldn't believe it for a second," Gidori says. "But it was real."

Without a visa, he wouldn't be able to achieve liftoff. And he only had a month to get one. He rode a bus for eight hours to reach the U.S. Embassy in Dar es Salaam. "We got his visa maybe two or three days before he had to report to school," Monk says.

Money was another issue; Patel and Monk still had to figure out a way to cover the rest of the tuition. In the end, the pair used what would have been their own salary to pay Gidori's school fees.

By fall, Gidori had left a world where textbooks were rare and entered an environment where every student had to have an iPad — and expectations were high.

His limited English meant he had to keep his iPad and notebook nearby, looking up words he didn't know and writing down the definitions. For just one chapter of his summer reading, Lord of the Flies, he had pages of vocabulary. 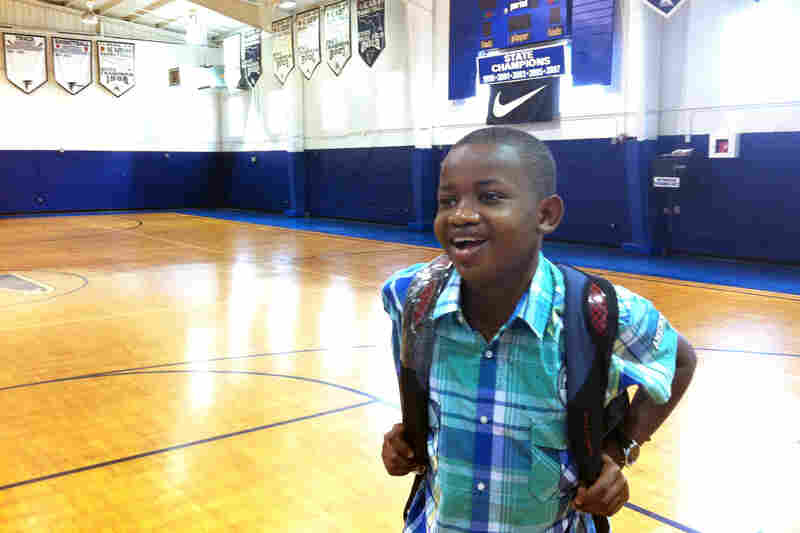 Gidori had a lot to learn at Florida Air Academy — including the fact that an 81 isn't good enough for an A. Here he is on his first day of school. Courtesy of Sanjay Patel hide caption 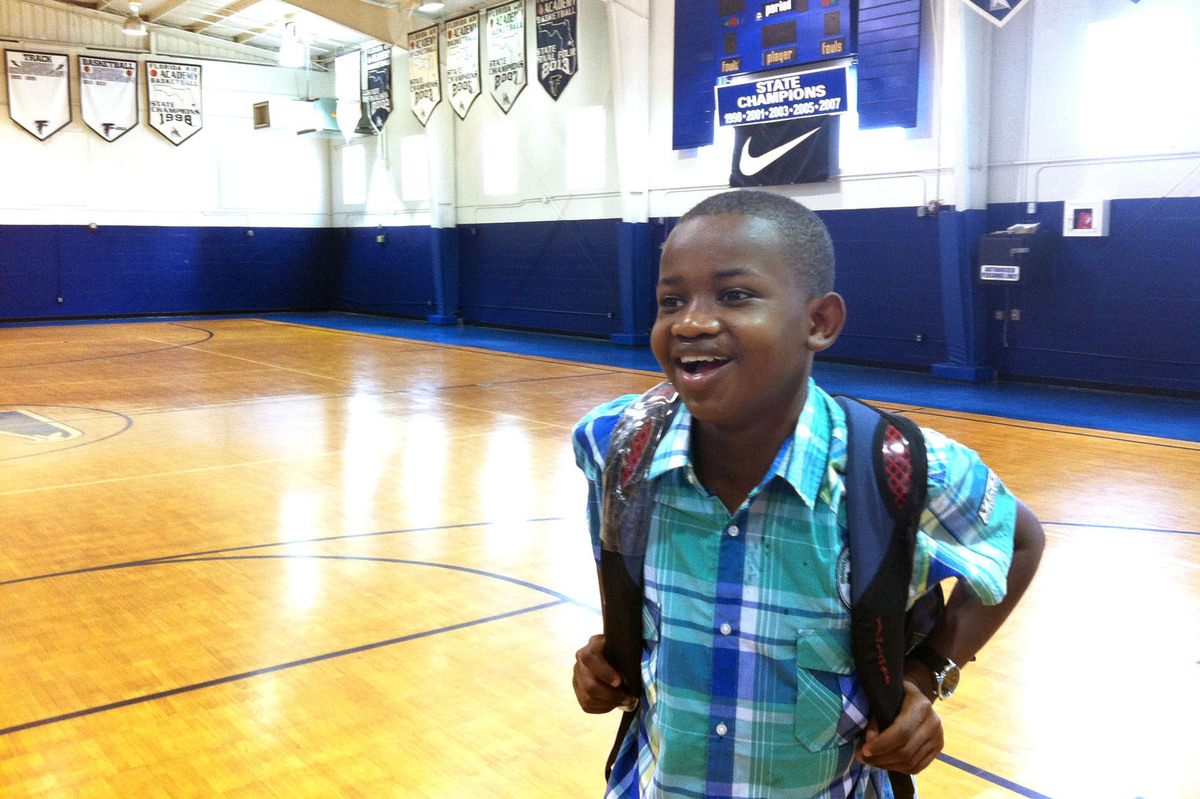 Gidori had a lot to learn at Florida Air Academy — including the fact that an 81 isn't good enough for an A. Here he is on his first day of school.

Gidori learned the hard way that there were no more easy A's. In Tanzania, 81 was a top grade. He got a 79 on a biology test at the academy and was told that wasn't good enough. When Monk told him he needed at least a 90, he insisted he couldn't do it.

But sure enough, Gidori earned straight A's by the end of the year. When he felt discouraged, he'd think of those who've supported him: "My country, my continent, my family and friends — I don't want to disappoint them. I want to make them proud."

Indeed, persistence is one of Gidori's greatest qualities — to the frustration of his friend, Leah Albert, who has also come from Tanzania to study. She filmed the video for the Kickstarter page and had to redo it 101 times.

"Sometimes he wouldn't smile. One time, his astronaut helmet wouldn't be OK. Other times it was the potato salad or the ball," she says. "You know, he's serious."

Serious about potato salad, too. He was reluctant to say what was in his recipe, but after a little prodding, he gave up one secret ingredient — a special spice made from Tanzanian ginger. If you're as curious as I am about the taste, he's willing to trade his experimental recipe for a bit of support.