Accessibility links
Globe-Trotting Virus Hides Inside People's Gut Bacteria : Goats and Soda Scientists have discovered what may be the most common virus in people worldwide. The tiny critter doesn't make us sick but may be involved in obesity and diabetes. 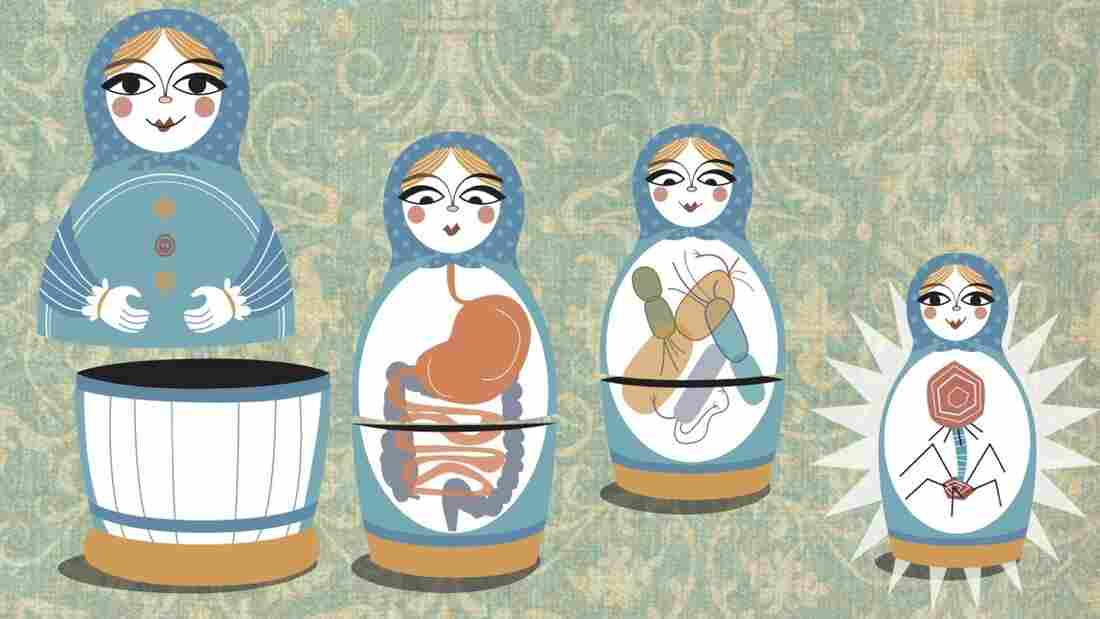 We are all Russian nesting dolls: Our intestines house many bacteria, which house many viruses. These so-called bacteriophages are likely as important for our health as the bacteria they live in. Lisa Brown for NPR hide caption 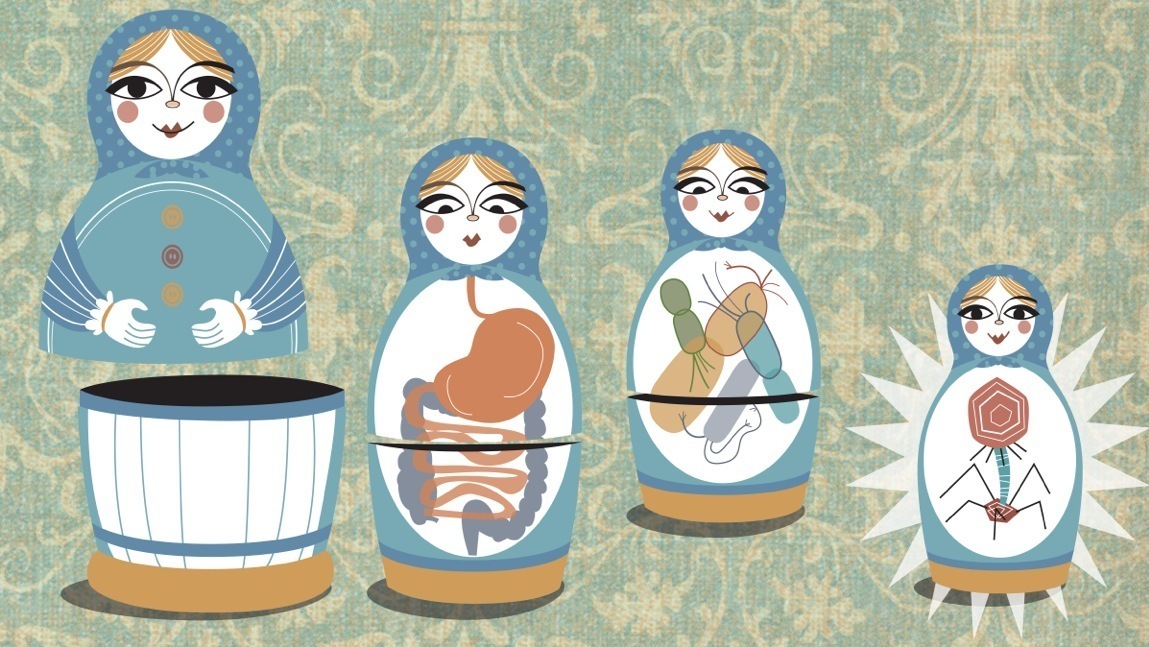 We are all Russian nesting dolls: Our intestines house many bacteria, which house many viruses. These so-called bacteriophages are likely as important for our health as the bacteria they live in.

New viruses are a dime a dozen.

Every few months, we hear about a newly discovered flu virus that's jumped from birds to people somewhere in the world. And the number of viruses identified in bats is "extraordinary and appears to increase almost daily," scientists wrote last year in the journal PLOS Pathogens.

But a virus that has been quietly hiding inside millions of people on three continents — and never been noticed before? That doesn't come along often.

Scientists at San Diego State University have discovered what may be the most common and abundant virus in the human gut. And yet, the tiny critter, called crAssphage (oh yes, there's a story behind that name), has eluded researchers' radar for decades.

Here's the cool part: The virus doesn't just hang out in our intestines naked and alone, scientists report Thursday in the journal Nature Communications. Instead, the virus takes up residence inside gut bacteria — specifically inside Bacteroides, a group of microbes that have been linked to obesity and diabetes.

So the system is almost like a Russian nesting doll: The virus lives inside the bacterium, which lives inside our gut.

The new virus doesn't make us sick, but it may be involved in controlling weight through its effect on Bacteroides. "We suspect this virus is very important in regulating the number of these bacteria [the Bacteroides] in the intestine," says computational biologist Robert Edwards, who led the study.

There are 10 times more cells from bacteria and fungi in and on our bodies than there are human cells.

Edwards and his colleagues found the virus in fecal samples from people across the U.S., Europe, Korea and Japan. "But we think the virus is likely found worldwide," he tells Goats and Soda. "We've basically found it in every population we've looked at. If we tested Africans, we think we'd find it in them, too."

Scientists are just starting to learn about all the organisms that live in and on the human body. Collectively, they're called the human microbiome. And there's no question they're important for our health.

So far, most studies have focused on the gut's bacteria — not other microbes there. These bacteria are known to help regulate everything from our weight and immunity to heart health and behavior. One study even found that changes in gut bacteria cause malnutrition in young children in Malawi.

But during all this discussion of microbiomes, there have been billions of tiny elephants in the room: viruses.

Some scientists estimate that there are a hundred times more virus particles than human cells in the human body (and 10 times more viruses than bacteria). But no one ever talks about viruses. Why? Because they are extremely difficult to study.

The number of viruses known to infect people is remarkably small. And the number known to hang out in our bodies for a long time is even smaller. For instance, there are herpes viruses, which cause painful, recurring blisters. Adenoviruses can set up recurring respiratory infections in people, and papillomavirus causes cervical cancer.

And hepatitis viruses and HIV can silently hide in the body for years.

Beyond these common pathogens, however, the list quickly peters out, although DNA surveys suggest that humans have thousands of viral species in and on us. Most of them likely coexist within our gut in peace and harmony.

To start putting a name and function to some of these quieter organisms, Edwards and his colleagues dug deep into sequencing data from the Human Microbiome Project.

They noticed that a few genes from the same virus kept popping up over and over again. So they painstakingly stitched together the virus's genome inside the computer.

Then the team used that genetic code to search for the virus in fecal samples from people in Europe, Korea and Japan. To their surprise, the virus was strikingly common. It occurred in 75 percent of the 466 samples they analyzed.

And the virus was abundant. About a quarter of the viral genes in the samples belong to crAssphage.

"Given the virus's abundance and how widespread it is, it is probably going to be very important for understanding the ecology of the human gut," says microbiologist Jonathan Eisen, of the University of California, Davis. "And it likely infects a group of organisms [the Bacteroides] thought to be really important for health."

Eisen, who wasn't involved with the study, calls the new virus "really cool" and "worth learning more about." But he says it's too soon to say if it's truly a global virus.

"The samples searched so far have reasonable diversity — they're not just from white men in New England," Eisen says. "But we haven't sampled all of human diversity."

"We desperately need an organized systematic effort to gather information about viruses," Eisen says. He proposes something like the Human Microbiome Project, but for viruses that directly infect humans and viruses that infect the bacteria of the human microbiome.

That point brings us back to the new virus's strange name: crAssphage.

"Oh, no, we never thought of that," Edwards says with a chuckle. "We would never be crass."