Accessibility links
The Plague In Oregon Is Pretty Much The Same As The Medieval Version : Goats and Soda The plague has reportedly popped up in Oregon. It's the same disease that killed millions in the Middle Ages. Only now we know how to treat it. 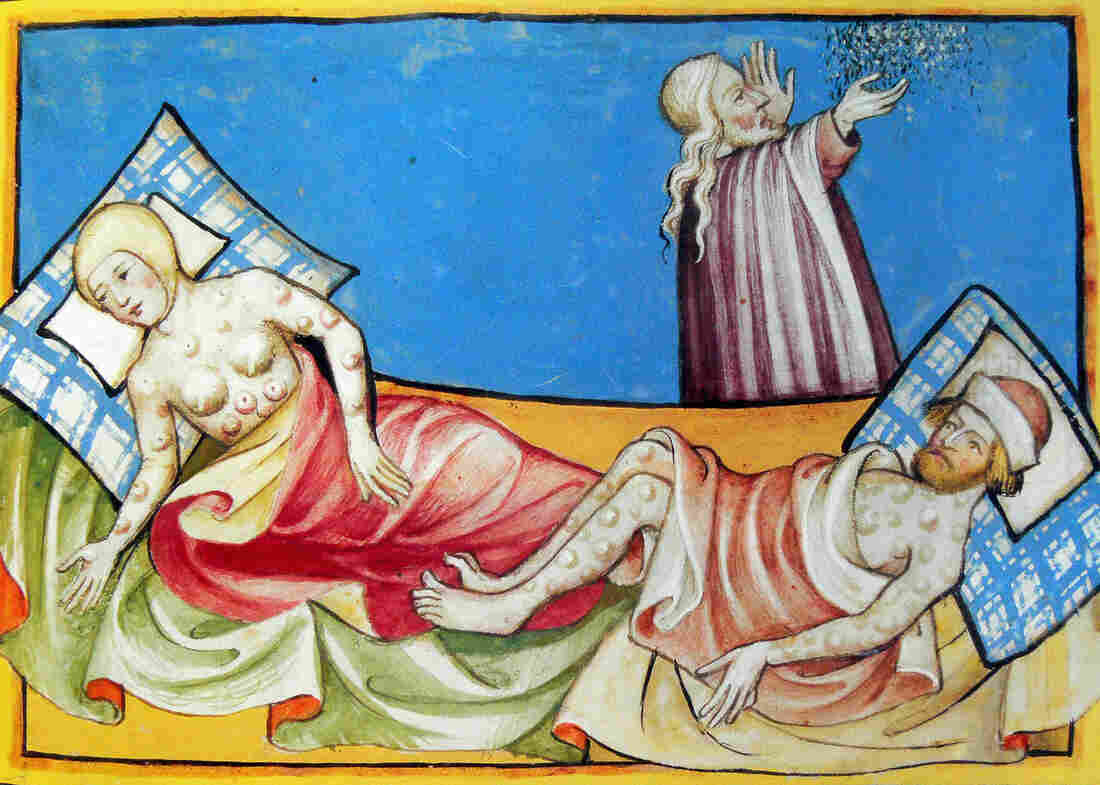 A 15th-century Bible depicts a couple suffering from the blisters of the bubonic plague. The same bacterium that ravaged medieval Europe as the "black death" occasionally re-emerges. Corbis hide caption 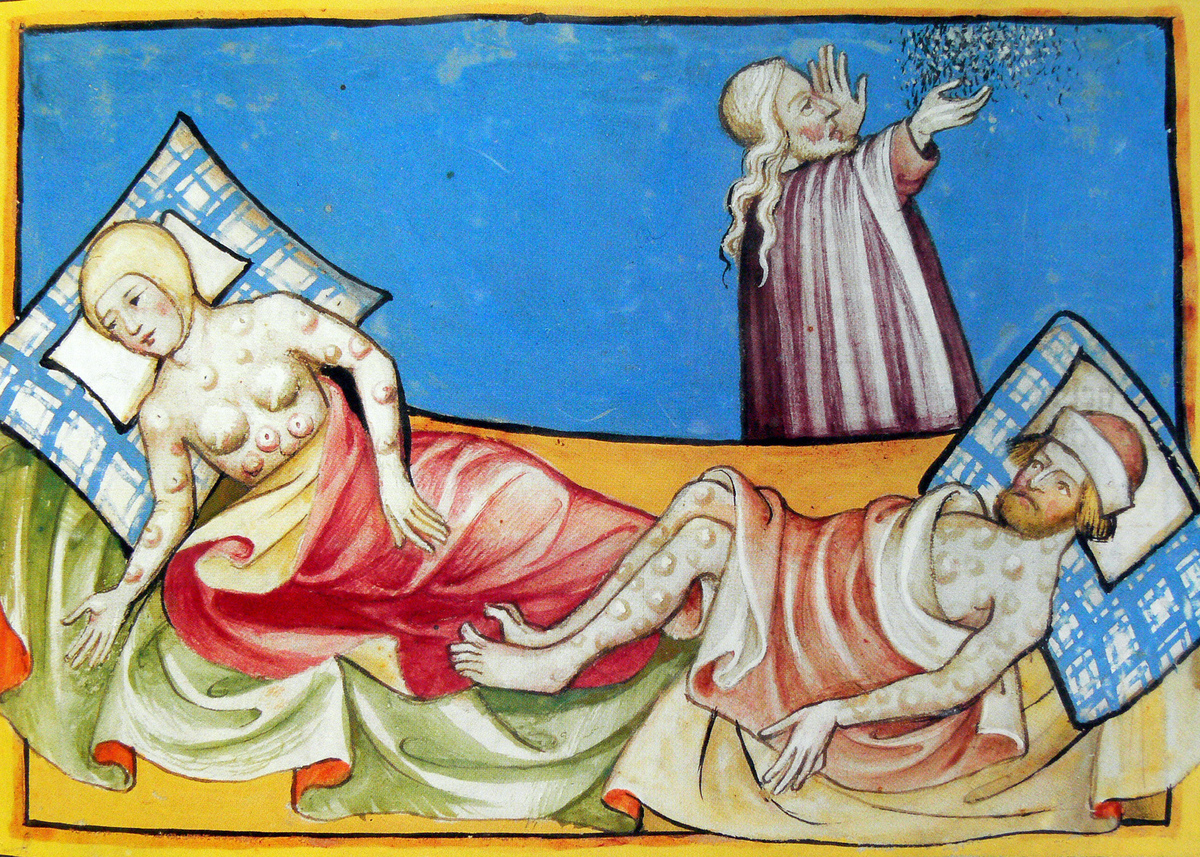 A 15th-century Bible depicts a couple suffering from the blisters of the bubonic plague. The same bacterium that ravaged medieval Europe as the "black death" occasionally re-emerges.

The plague is making headlines again.

A teenage girl in Oregon reportedly came down with bubonic plague while on a hunting trip. The culprit, as always, is a flea, which can spread the infectious bacterial disease from squirrels and other rodents.

This isn't the first time the disease that terrorized the medieval era has made a modern appearance.

In the summer of 2014, five cases were reported: four in Colorado and one in China.

The Colorado residents were diagnosed after coming into contact with an infected dog.

According to Chinese officials, parts of a city in northern China were quarantined for nine days, and 151 people were put under close observation after a man died of the disease last Wednesday. He was reportedly infected after handling a dead Himalayan marmot, a chubby rodent with a history of carrying the bacterium that causes the plague.

What's remarkable is that the disease has remained essentially the same over all those years and in all those places. Anthropologists have found that the strain of bacteria in medieval skeletons from Europe is almost identical to the one circulating today.

Once known as the Black Death for the dark patches caused by bleeding under the skin, the plague swept Europe 700 years ago, killing a third of the population — an estimated 25 million. It wiped out millions in China and Hong Kong in the late 1800s before people put two and two together and started targeting rat populations.

Centuries later, the plague periodically pops up in countries across the globe.

The painful infection is caused by Yersinia pestis, a bacterium that dwells in fleas. The bacteria will hook onto the lining of the flea's gut and stomach, and grow into a film that can clog the insect's digestive passage. The next time the flea goes for a blood meal, it pukes into whatever animal it feeds on (usually a rodent), spreading the bacteria.

Once the rodent is infected, the bacterium can then spread to the wild carnivores that eat it, or to pets and people that come in contact with it.

The plague can persist in rodent populations, especially wild ones, for a long time without affecting humans. 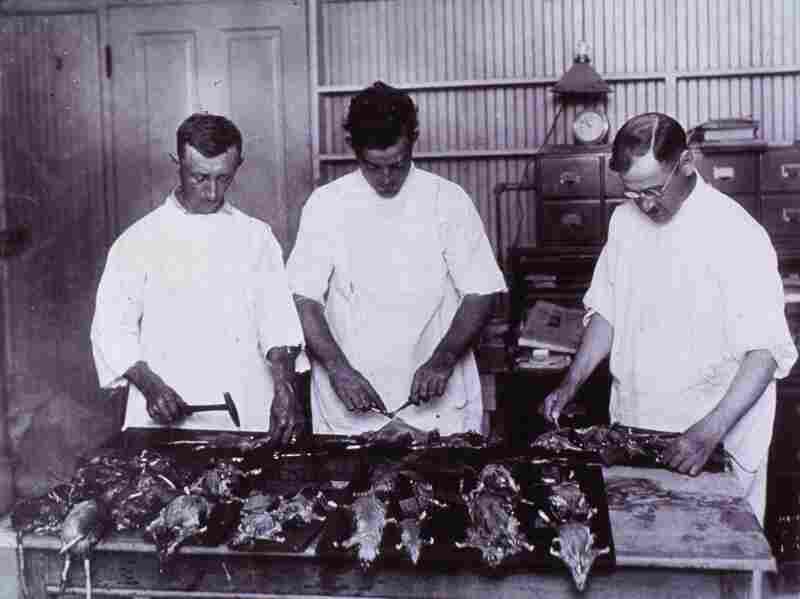 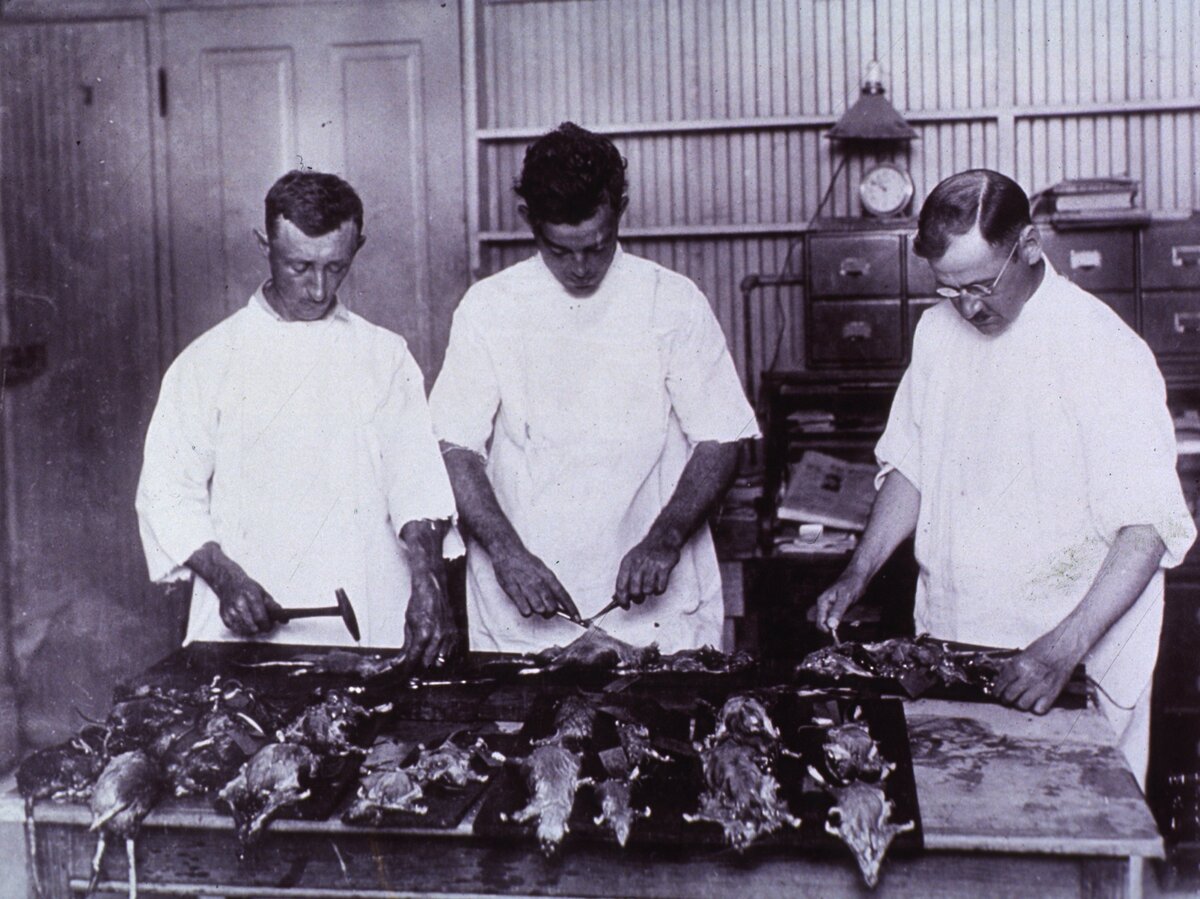 But it can re-emerge. Ken Gage, who studies vector-borne diseases at the Centers for Disease Control and Prevention, says temperature and humidity can change flea behavior, regulate how comfortable the bacteria are inside their hosts, and allow rodent populations to mushroom.

"The rodent densities have to get above a certain level," he says, "and when that happens, the likelihood of a rapid plague spread among the rodents goes up pretty dramatically."

As their rodent hosts die off, the fleas seek new hosts — typically the next animal to peer down the burrow hole.

"What we see in the West here is the fleas will crawl up to the entrance of the burrow and wait for a host to come by," Gage explains. "If they get on another rodent that they can live on, then they've been successful. But they can also jump on humans, or on dogs or coyotes or cats, which aren't the right hosts, but unfortunately those animals can be bitten by the fleas and get plague."

Sometimes, that new host can transport the fleas a few miles away and spread them to other animals.

In the U.S., which sees between one and 17 human cases a year, the plague tends to surface in rural areas, often near plague-perfect settings: semi-arid forests and grasslands populated by everything from squirrels and rats to voles and rabbits. Cases can occur when people, or their pets, get within flea-jump range.

There are three forms of the plague. The first, bubonic, happens when the bacterium infects the skin where a person has been bitten, causing a swollen lymph node, or "bubo," the hallmark bumps in medieval images of the disease. If the bacterium enters the bloodstream, that's septicemic plague. And if the infection gets into the lungs, at which point it's called pneumonic plague, it can spread from person to person in the droplets of a cough.

The World Health Organization considers pneumonic plague to be among the deadliest infectious diseases.

"Here in the U.S., what we would do is identify the person, try to figure out where they've been, who they've had contact with in the last few days," he says. That includes anyone who got within 6 feet of the patient — close enough to get coughed on.

As with most bacterial infections, antibiotics can treat it. But medics have to catch the symptoms early on.

In the U.S., infections tend to happen in the West, fanning out from San Francisco, where the disease may have made its first landing on American soil around 1900.

"One thing you have in the Western U.S. is a good variety of rodent species that are susceptible to plague, and they have fleas that can transmit the disease," says Gage. "That's the key element."

But he's not too worried about the disease.

"I don't think we'll see another pandemic," Gage says, "because we know the organism, and we know how to treat it. We know how to do some flea control. We can break the cycle, at least as far as involvement with humans."

Indeed, outbreaks in Libya in 2009, the Democratic Republic of the Congo in 2005, and Algeria in 2003 were contained.

The bacteria may still be host-hopping around the globe, but modern medicine has prevented the plague from getting anywhere near the disastrous levels it reached in the Middle Ages, described in one Scottish account from the 14th century:

"So great a plague has never been heard of from the beginning of the world to the present day. ... At God's command, moreover, the damage was done by an extraordinary and novel form of death. ... This sickness befell people everywhere, but especially the middling and lower classes, rarely the great. It generated such horror that children did not dare to visit their dying parents, nor parents their children, but fled for fear of contagion as if from leprosy or a serpent."