Accessibility links
This Suit Keeps Ebola Out — So How Can A Health Worker Catch It? : Goats and Soda The head-to-toe protective gear is designed to prevent Ebola from infecting health care workers, yet some do contract the disease. It's not the suit's fault. It's likely a case of human error. 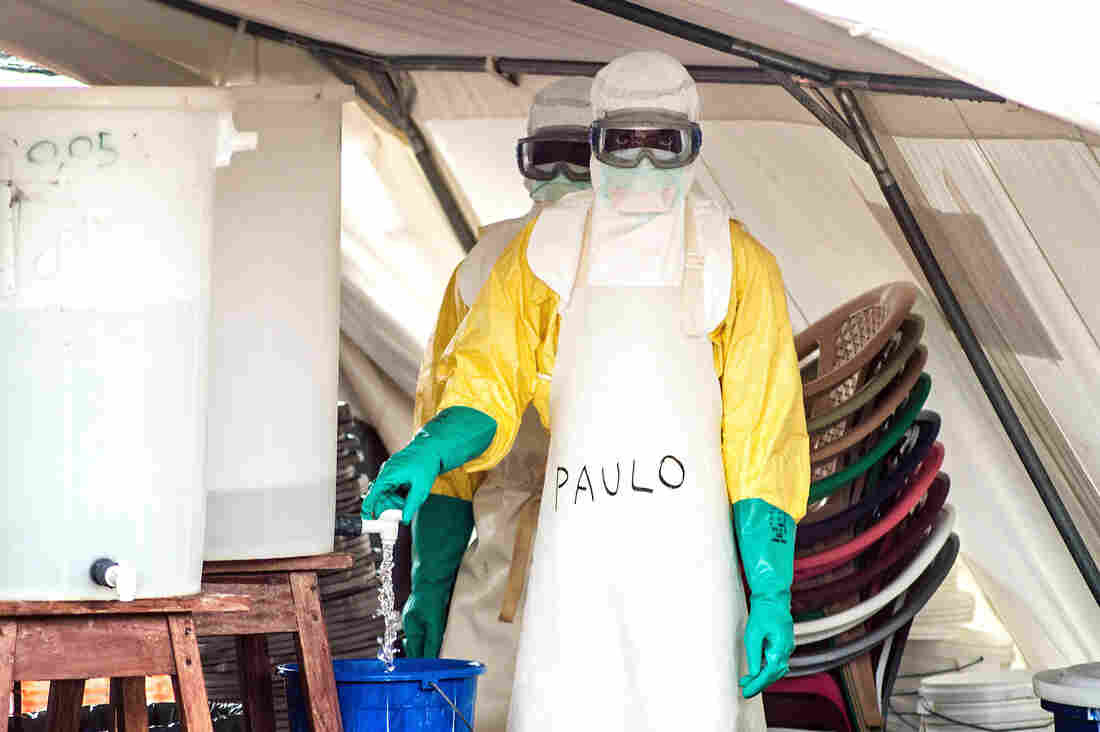 Protective gear runs from goggles and head covering to gloves and boots. This health worker was photographed leaving the isolation area at the treatment center in Kailahun, Sierra Leone. Tommy Trenchard for NPR hide caption 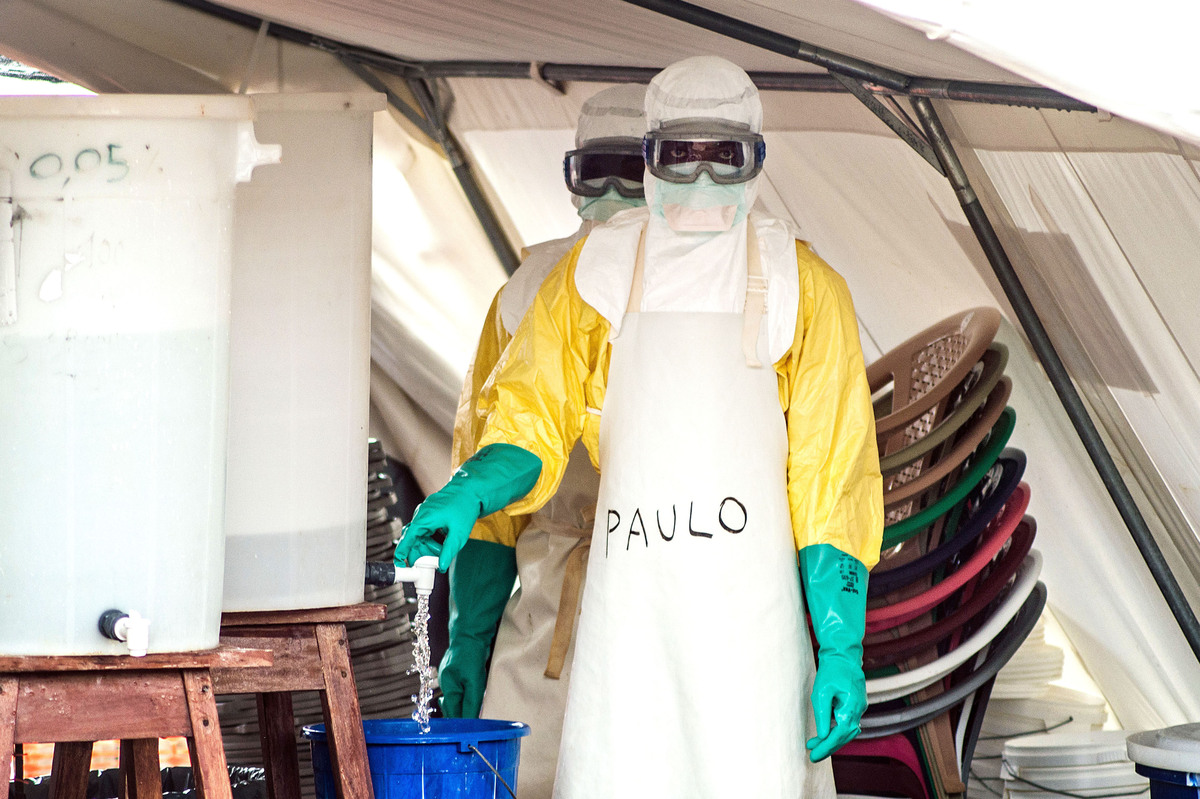 Protective gear runs from goggles and head covering to gloves and boots. This health worker was photographed leaving the isolation area at the treatment center in Kailahun, Sierra Leone.

The fight against Ebola in West Africa suffered a setback Wednesday. Dr. Sheik Umar Khan, one of the top doctors treating patients, caught the virus, even though he was wearing protective gear.

"Even with the full protective clothing you put on," Khan has said, "you are at risk."

That statement made us wonder about those yellow and white suits you see in photos: Just how good are they at protecting health workers from the bodily fluids that can transmit the virus — vomit, blood, sweat, mucus?

To learn more about the gear known as PPE (Personal Protective Equipment), we spoke with Armand Sprecher, the medical adviser to Doctors Without Borders for hemorrhagic fevers, such as Ebola.

Does the suit have any weaknesses that put a health worker at risk?

The yellow suit that MSF [Medecins Sans Frontieres] uses is [made of] a woven plastic fiber. And they throw a laminate on it. It's very fluid impervious. But to work, it has to be used in conjunction with a set of behaviors and procedures.

Where we see health care worker infections when the PPE is in place, [the worker] did something to override the PPE: They didn't wear it appropriately or contaminated their hands in the process of getting [the suit] off.

So the hands could come in contact with fluids on the suit. Then what would happen?

The presumed way you get sick is virus gets into a mucus membrane inside your mouth, nose or eyes. If you were very, very good about keeping your hands off your face, you could probably get away with more exposed skin above the neck. But we like to cover [health workers] from the neck up. So when the hand goes to the face in an unconscious movement, it doesn't touch anything.

To reiterate: It's not the suit's fault. Things can just go wrong sometimes.

Yes. You can stick yourself with a needle, you can use your gear improperly, or you can undress improperly. 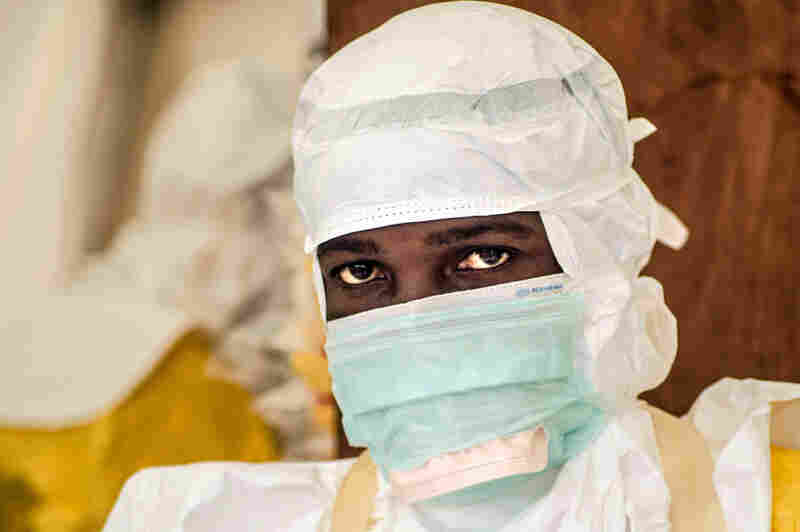 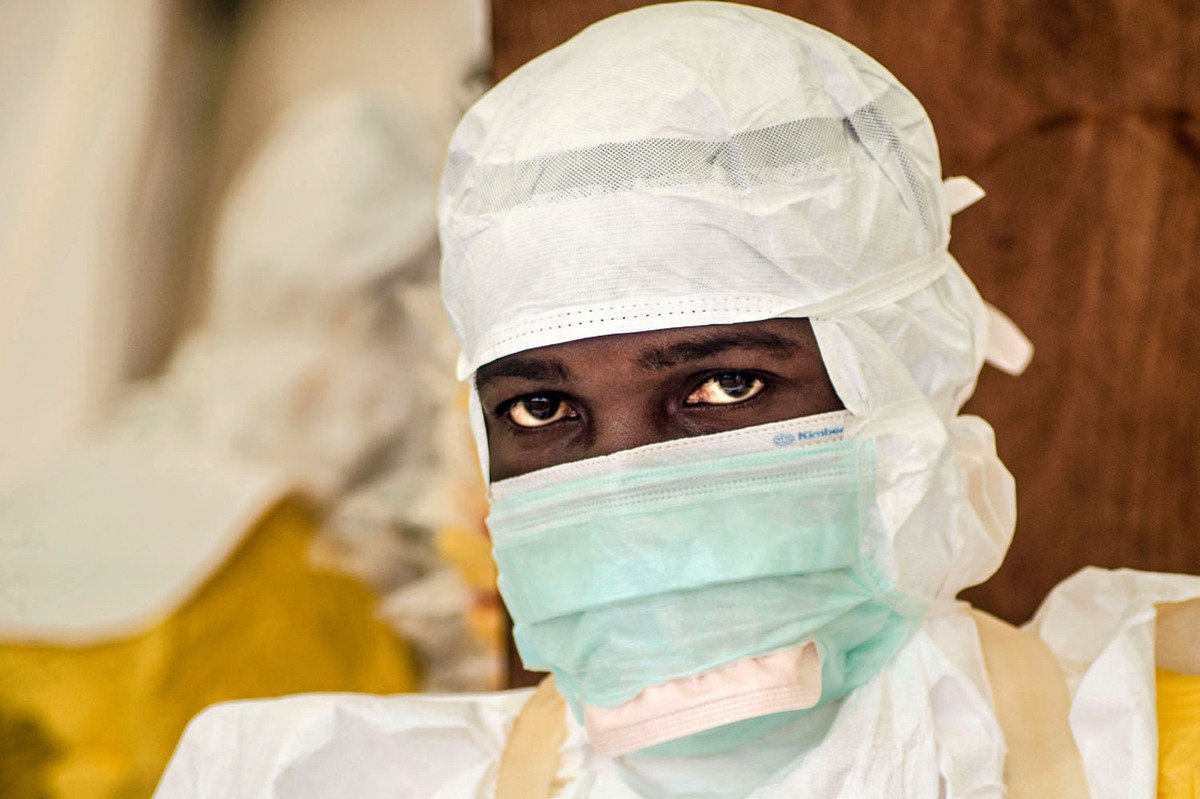 A health worker just needs goggles to complete the protective suit for the Ebola treatment center in Kailahun, Sierra Leone.

Could you get away with a less protective suit?

Let's say you're wearing some sort of material that covers you from the neck down — something that's permeable — and somebody vomited on your sleeve and fluid got through and got on your arm. Honestly, you should be OK. It won't get on you in a large volume. [The vomit] dries out, and [the virus] becomes inactive. Ebola doesn't last very long on a clean, dry surface.

But if you're caring for somebody and have virus on your hands, getting it into your nose, eyes or mouth is fairly common. So we wear the DuPont products that are fairly fluid resistant.

You've worn the suits. Are they heavy?

It doesn't weigh all that much — a few ounces, really. It's just that they're suffocating. If you wear something very fluid-resistant, it's also very air-resistant. It's hotter than hell. You're unable to wear the PPE for more than 30 or 40 minutes in tropical heat.

Could there be a better suit?

The ideal suit would offer enough protection to keep filoviruses [such as Ebola] out but let in a certain amount of air flow. Some newer suits are more impermeable up in the front, more breathable in the back. I haven't had the chance to look at them.

How has the medical community in West Africa reacted to the news of Dr. Khan's infection?

It's shaking things up. A lot of people know Dr. Khan. He is a fun guy. He is fascinated by [Ebola]. He wasn't mailing it in. He wasn't doing his job just to get through the day.

You'd go visit him in Kenema [where he worked in the hospital], he'd be like, "Hey, take a look at this." And with his digital camera, he'd show you a rash he saw on a patient. He'd say, "I just saw that patient an hour ago. I'm going to write this one up."

He took great pleasure in his work and brought an infectious enthusiasm. He's a pleasant person to talk to. He wasn't one of these people who put on airs. You're familiar with all of the character failings of doctors and the stereotypes — he didn't fit into any of those.

I hope he recovers.