Accessibility links
In India's Sultry Summer, Bucket Bathing Beats Indoor Showers : Goats and Soda Our writer hated it as a child. Now she loves it: Fill pitcher, pour over head. It's a great way to stay cool in a place where water isn't always running. Maybe you should put it on your bucket list. 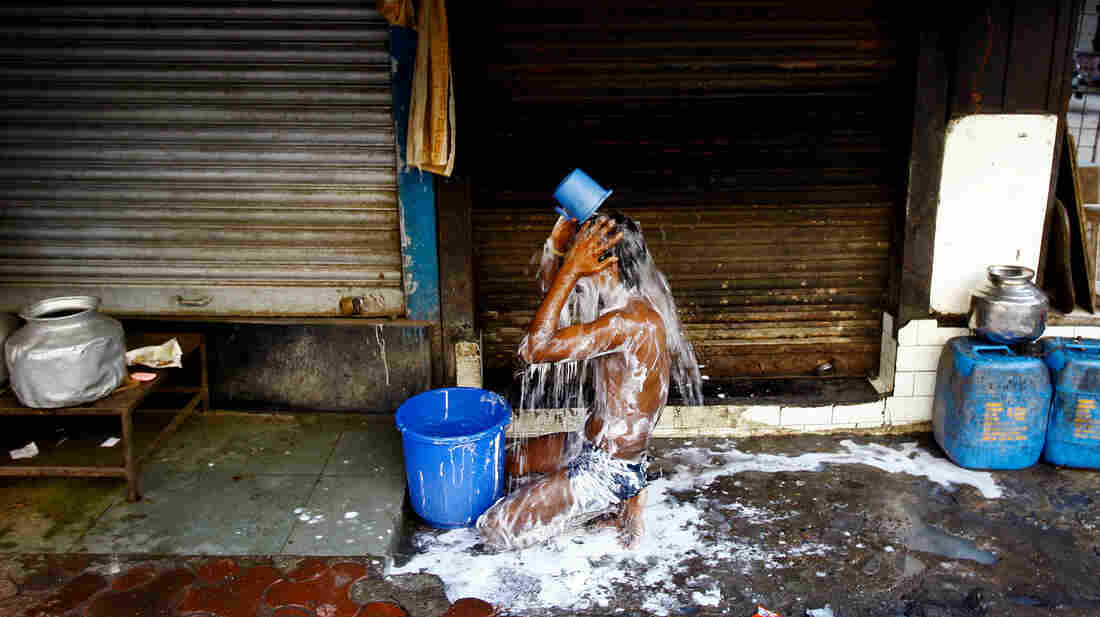 An Indian migrant worker pauses for a refreshing bucket bath on the roadside in Mumbai. Rafiq Maqbool/AP hide caption 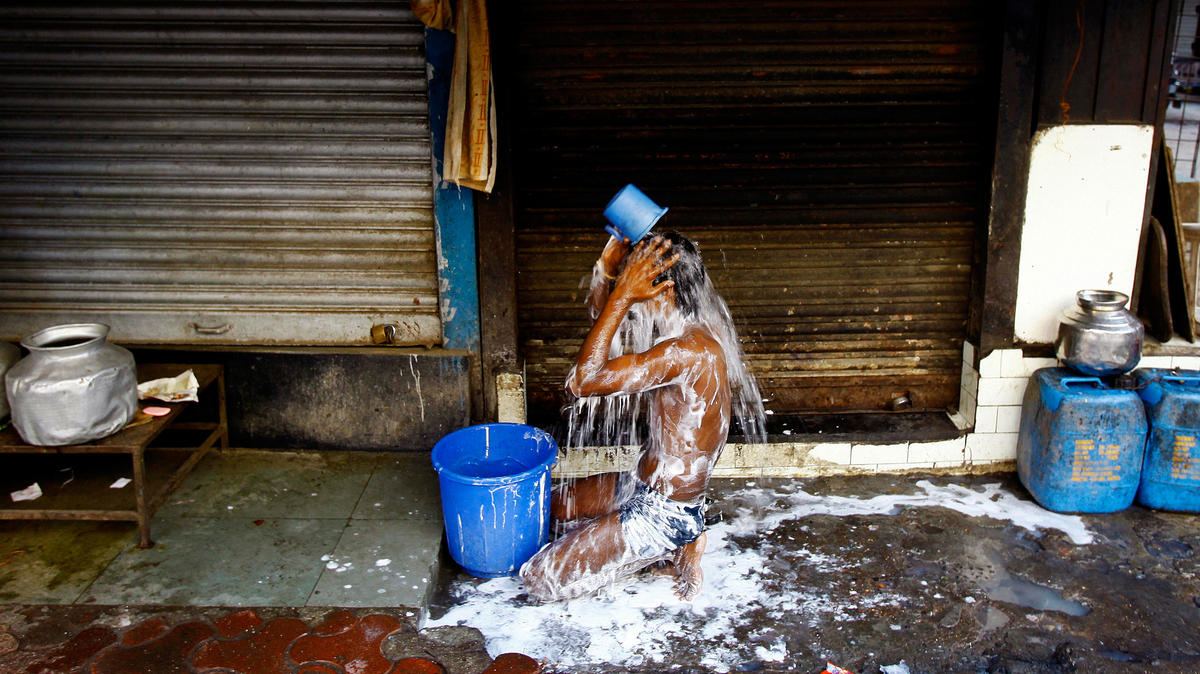 An Indian migrant worker pauses for a refreshing bucket bath on the roadside in Mumbai.

Two items that are essential to most Indian households are a bucket and a pitcher. They are to Indians what showers are to Americans, an integral part of the daily ritual of bathing. In a country where you can't count on running water, the vast majority of people bathe using a bucket of water and a plastic pitcher to pour the water over your head and body.

Like every other Indian I know, I grew up with bucket bathing. But by the time I was 10, indoor showers had started to become more common in bathrooms, as did a regular water supply, at least in urban India.

For my younger brother and me, showers were the cool, new way to bathe. It made time in the bathroom much more fun than the bucket-bathing ways of the old India. Much to my mother's annoyance, we stayed in the bathroom longer, wasting time and water, as she would put it. As a result, she spent her time yelling at whoever was in the bathroom to hurry up and get out.

When I moved to the United States in my 20s, I was glad to bid goodbye to bucket bathing. I was thrilled to have a hot and cold water supply any time of the day, any time of the year, with no fear of the water running out.

Long, hot showers early in the morning quickly became a necessary ritual. Over the 11 years that I spent in the U.S., I conveniently forgot what bucket bathing was like. That is, until this summer, when I was forced to return to that old practice in order to survive the scorching heat of New Delhi.

You see, houses in New Delhi still don't have a 24-hour water supply. The city supplies water once or twice a day, and homeowners store that water in an overhead tank.

But as summer progresses and temperatures rise to 90, then 100, then 110 and beyond, this stored water in the tank heats up. So does the water in the metal pipes that deliver it to your bathroom. The only shower you can have in this brutal weather is a hot shower, or more accurately, a boiling hot shower.

When I first complained about this to a friend, she suggested storing water in buckets overnight to cool it down and using it to bathe the next morning. "That's what I've been doing," she said. "It's the only way to survive the summer."

I was horrified. How could I bathe with just a bucket or two of water? It just didn't seem enough. But then my inner voice spoke up, scolding me for being so bratty. I am an environmental journalist. Shouldn't I be in favor of an option that uses less water — especially since millions of Indians still don't have a regular water supply or even a bathroom? Besides, my friends and parents still bucket-bathe, despite having showers, either out of habit or because of the unreliability of the water supply. The voice yelled at me. If they can do it, why couldn't I?

Soon, I had no choice but to try, simply because the water coming out of the faucet was scalding. It didn't matter whether it was 7 in the morning or 11 at night. The water was always too hot for a shower.

My first few bucket baths this summer were awkward. I was reluctantly relearning to do something I'd done regularly as a child. But soon, the water pouring down my head and body began to feel comforting. The water was indeed cold and refreshing, a welcome if momentary break from the unbearable heat.

Within a couple of weeks, I'd not only become comfortable with my bucket-bathing ritual, I'd even begun to enjoy it.

There is something about pouring pitchers of cold water on yourself that is better than the drizzle of a cold shower. Each pitcherful feels like a sheet of water hitting you at once. It's a bit like standing under a waterfall, albeit a very small one. You're startled at first, but the cold water racing down your head and body cools you instantly, releasing you from the stupor of the Delhi summer. And because there is a limited amount of water, I now appreciate every drop in a way that I never appreciated water when I used the shower.

So for now, I've taken to bucket bathing. Although I can't promise I'll stick to it when winter comes around. It's possible that my need to stay warm will make me temporarily abandon my water-saving ways to return to the wasteful practice of long, hot showers.