Accessibility links
Fist Bumps Pass Along Fewer Germs Than Handshakes : Goats and Soda That strong, sturdy handshake your grandpa taught you isn't the cleanest way to greet someone, scientists say. So should doctors and nurses in hospitals start bumping fists? 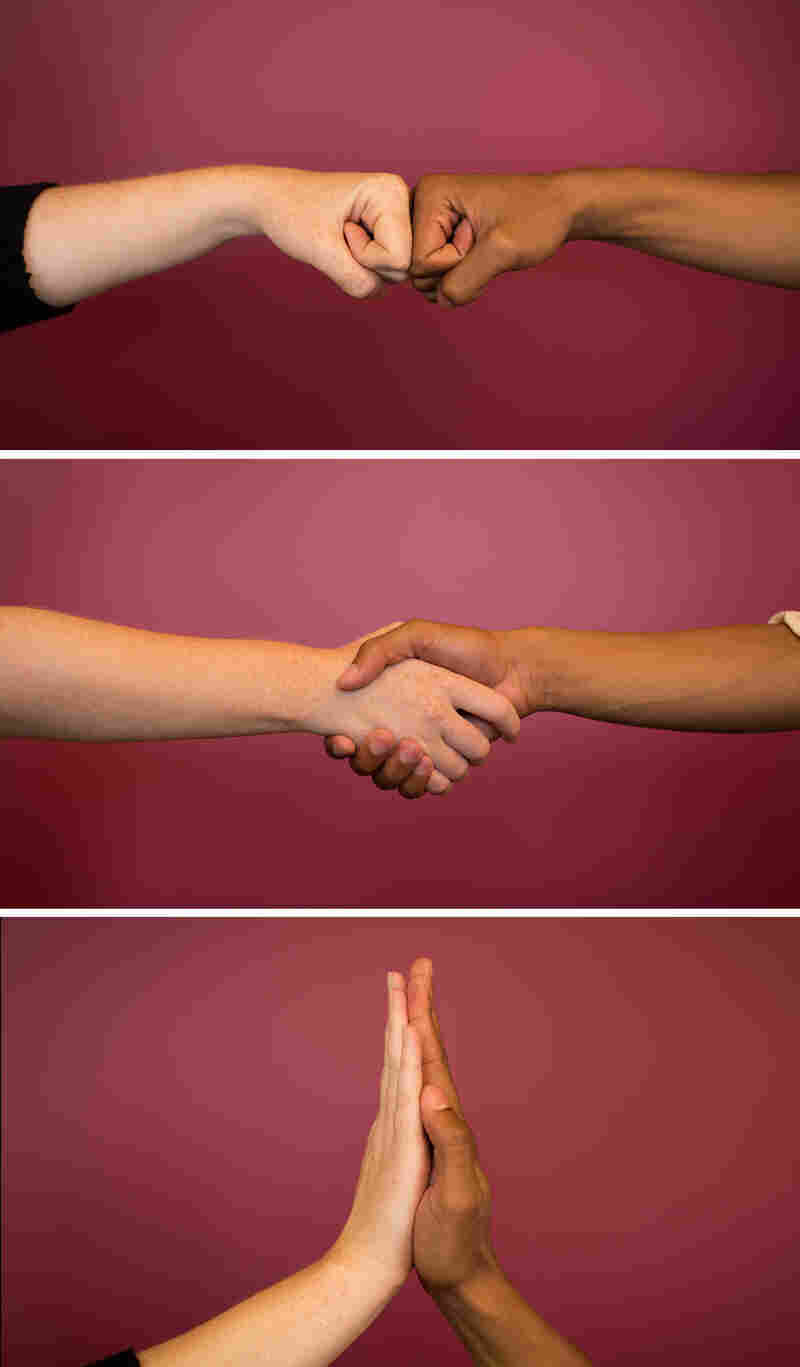 Which greeting is the cleanest? The quicker the touch, the less likely many microbes will make the jump. Ryan Kellman/NPR hide caption 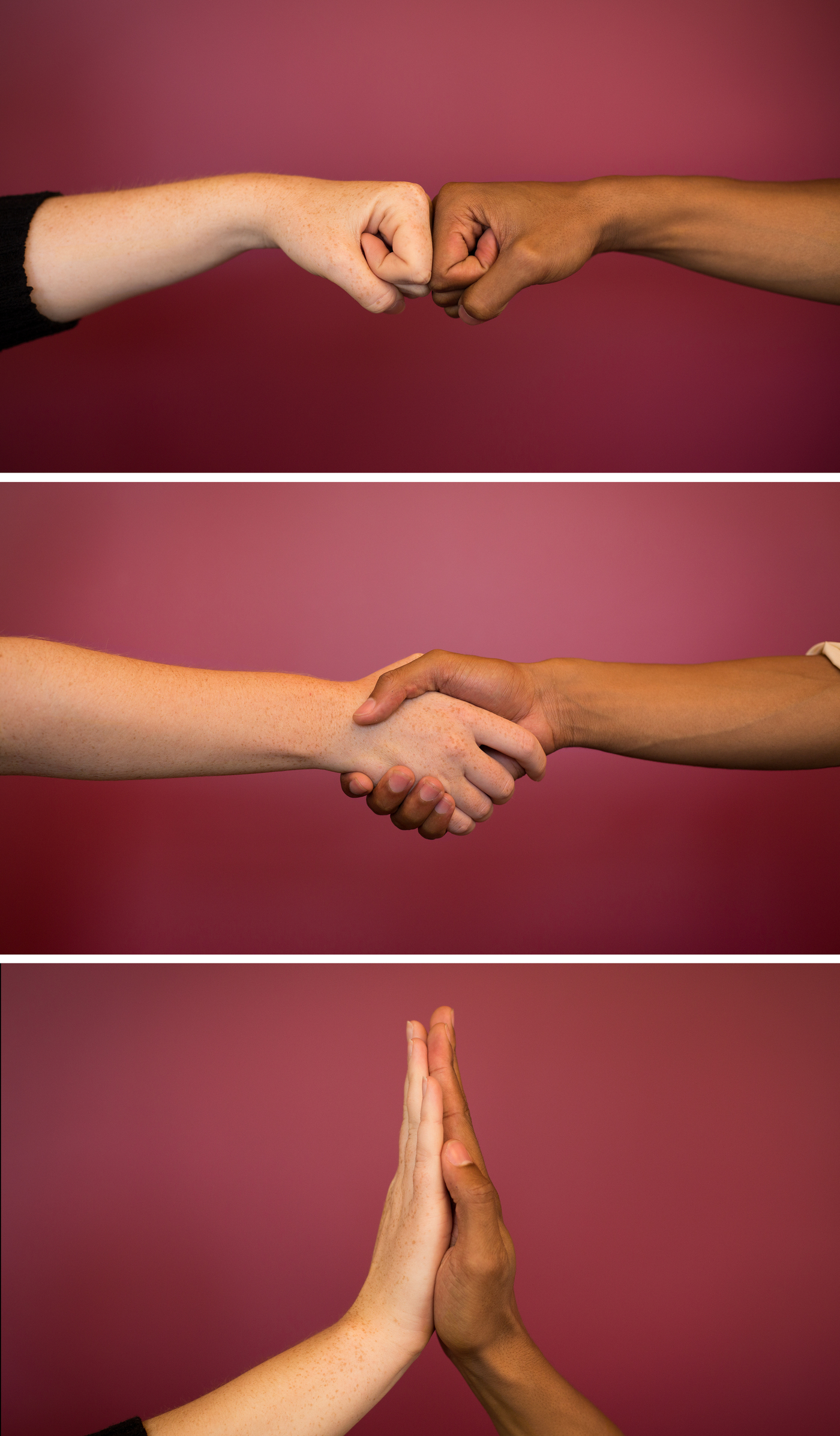 Which greeting is the cleanest? The quicker the touch, the less likely many microbes will make the jump.

A few weeks ago, we took a look at nonverbal greetings around the world. In Japan, they bow. Ethiopian men touch shoulders. And some in the Democratic Republic of the Congo do a type of head knock.

But the American fist bump stood apart from the rest.

Knocking knuckles was the only greeting we could find that signaled both victory and equality; neither bumper has the upper hand, so to speak.

But many of our readers pointed out that bumping fists may have another superior quality: It's cleaner than a traditional handshake.

Now scientists in Wales have confirmed what these astute readers already knew. You're much less likely to pass along bacteria when you bump fists than shake hands or high-five, biologists reported Monday in the American Journal of Infection Control.

The study was small. Only five pairs of people bumped, shook and slapped palms. But the findings were clear-cut. A moderately strong handshake transferred more than five times as much Escherichia coli bacteria onto a recipient's hand than a fist bump, biologist David Whitworth and his colleague at Aberystwyth University found.

And that strong, sturdy handshake your grandpa taught you was even dirtier. It transferred nearly 10 times more bacteria than a fist bump.

The high-five fell between the two other greetings. Slapping palms, on average, passed along twice as much bacteria as the fist bump.

To quantify the cleanliness of each greeting, Whitworth and his colleague had volunteers put on a sterile glove and then dip their hands into a solution packed with bacteria. After the glove dried, each volunteer shook, bumped or high-fived another person wearing a clean glove. The scientists then measured the amount of E. coli on the recipient's hand.

In general, more microbes moved to the recipient when the greetings were longer, stronger and involved more skin-to-skin contact.

The bacteria used in the study were harmless. But Whitworth thinks the findings would also apply to pathogenic bacteria and viruses.

Many nasty microbes, such as Clostridium difficile and influenza, spread in clinics and hospitals through the hands of health care workers. And several infectious disease doctors have recently called for a ban on handshakes in hospitals.

But completely forbidding this classic greeting altogether at clinics may go too far, says Mary Lou Manning, of the Thomas Jefferson University School of Nursing in Philadelphia.

"We always have to take our cues from a patient," says Manning, who is the president-elect of the Association for Professionals in Infection Control and Epidemiology. "If a patient extends his hand, I don't think I would refuse it. I would just wash my hands before and after."

And Manning definitely won't switch to bumping. "Fist bumping just seems more of an informal kind of greeting — a way to greet friends, not patients," she says. "I haven't been a fist bumper, and I don't intend to become one."

But she is a big fan of Whitworth's study. "I think it's fabulous," she says. "It's getting us all talking about the role of germ transmission from hands. I think awareness can potentially lead to behavior change and disease prevention."