Accessibility links
As Ebola Surges, CDC Sends Aid And Warns Against Travel : Goats and Soda It will take at least three to six months to contain the largest Ebola outbreak in history, the health agency says. Fifty-seven people have died in four days, raising the death toll to 729. 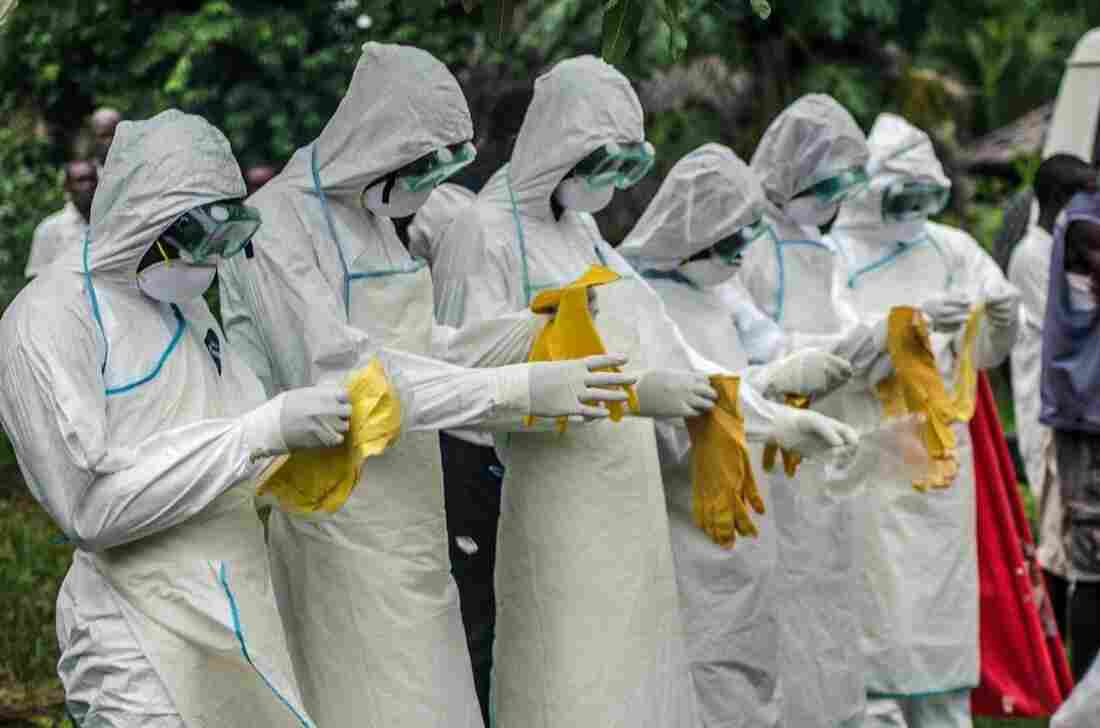 For the second time this week, the Centers for Disease Control and Prevention has raised the travel alert for three West African countries, as the death toll in the Ebola outbreak increased at an alarming rate.

"The bottom line is that the multiple outbreaks in West Africa are worsening right now," CDC Director Dr. Tom Frieden told NPR on Thursday. "This is the biggest, most complex and the most difficult outbreak of Ebola that we've had to deal with."

In only four days, the total number of cases has risen by 122, or about 10 percent. Since March, the World Health Organization has reported more than 1,300 cases and 728 deaths in Guinea, Liberia and Sierra Leone. Nigeria has reported one case in a traveler from Liberia.

In response, the CDC is sending at least 50 more doctors and scientists to the region to help get the outbreak under control and stop its spread, Frieden says.

The CDC also elevated the travel alert to "Level 3" — the most serious level — for Liberia, Guinea and Sierra Leone. It now advises against any nonessential travel to the three countries because of the "high risk."

This advisory level is reserved for grave situations, such as the SARS outbreak in 2003 and the Haiti earthquake in 2010.

The measure reduces the risk of Americans catching Ebola, Frieden says. And it also helps to prevent overcrowding of clinics and hospitals with emergencies not related to Ebola.

"Even before Ebola, they [these countries] had relatively weak health care systems that ... weren't always as highly functional as the government wished they would be," Frieden says.

One of the big concerns this week has been the large number of health care workers getting sick. 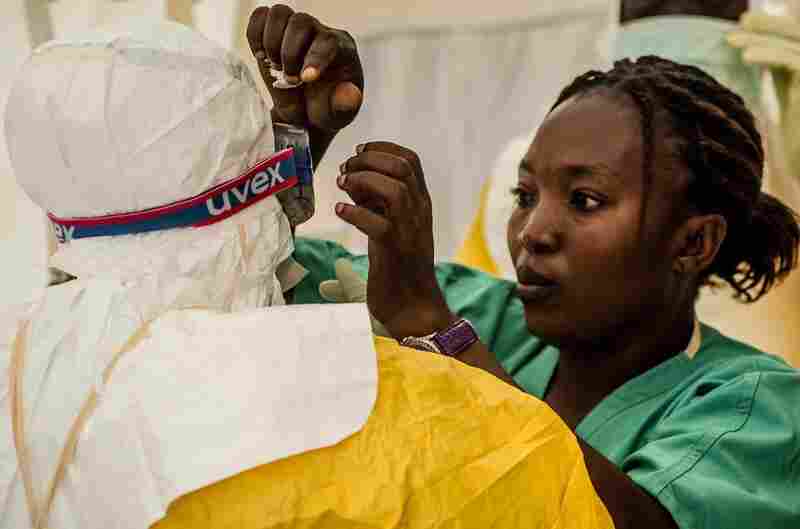 A nurse helps health workers suit up before treating Ebola patients at an isolation ward run by Doctors Without Borders in Kailahun, Sierra Leone. Tommy Trenchard for NPR hide caption 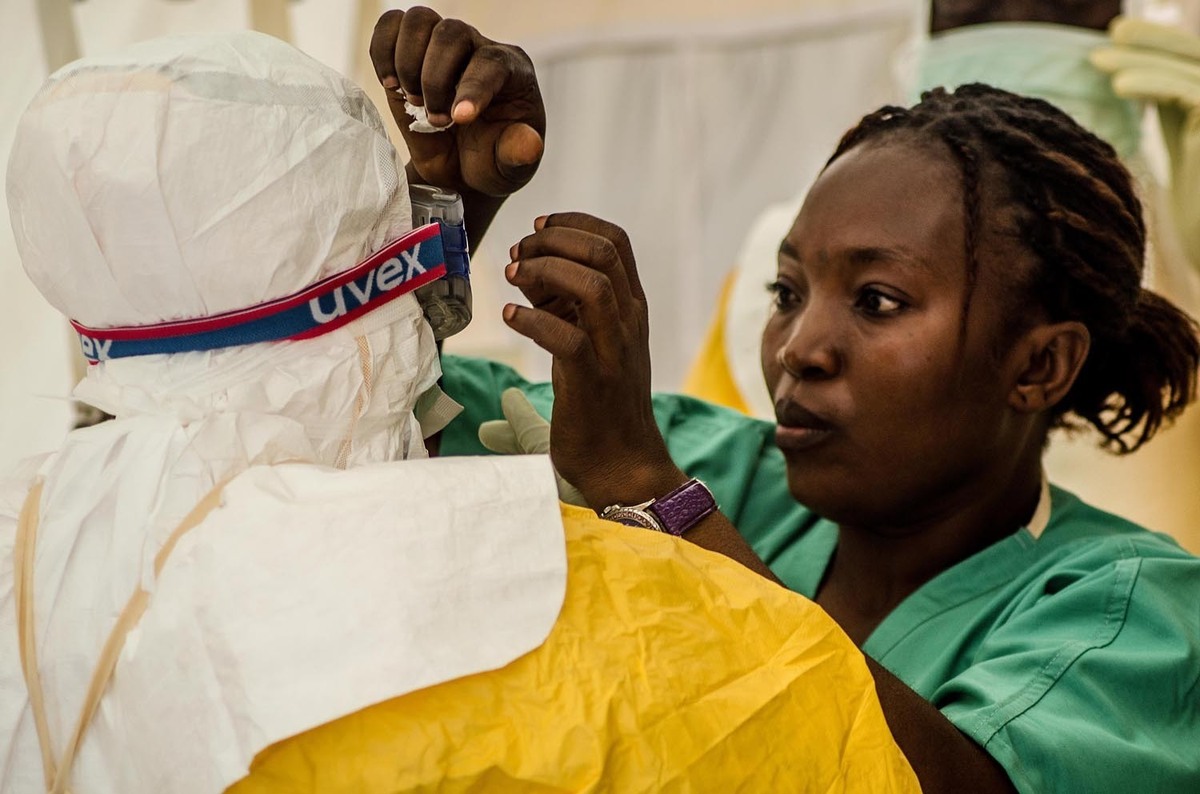 A nurse helps health workers suit up before treating Ebola patients at an isolation ward run by Doctors Without Borders in Kailahun, Sierra Leone.

"It's a terrible infection, and it's taken a terrible toll on the health care system," Frieden says. More than 100 doctors and nurses in the region have gotten infected, and about 70 of them have died.

Two leading doctors in Liberia and Sierra Leone died this week, and two American aid workers are in serious condition at a clinic in Monrovia.

Dr. Kent Brantly, of Fort Worth, Texas, and Nancy Writebol, of Charlotte, N.C., were working with the Christian aid group Samaritan's Purse when they caught the virus. They are both in "grave condition," the group said on its website.

The Peace Corps is evacuating 340 volunteers from the region. Two of them were under observation after potential exposure to Ebola.

Despite all of this, Frieden says he's confident that the outbreak can be contained — as long as health care workers are able to "meticulously" track down cases and isolate them before they spread the virus.

But it won't be quick or easy, he says. In fact, in the best-case scenario, it will take at least three to six months to stop the outbreak. And "we are not in the best of circumstances," he says.

There's little worry that Ebola will spread to the U.S., Frieden says. One reason is that the disease isn't transmitted through the air but rather through close contact of bodily fluids, such as blood, sweat and saliva.

"The good news — if there is any good news about Ebola — is that you don't spread it when you don't have symptoms," Frieden says. "So you can't get it from someone who's healthy."