Accessibility links
Doctor With Ebola Is Improving, As Nigeria Reports Second Case : Goats and Soda Dr. Kent Brantly, the first person to be treated for Ebola in the U.S., arrived in Atlanta Saturday, while the outbreak in West Africa continues to spread. Nigeria says a doctor there has the virus. 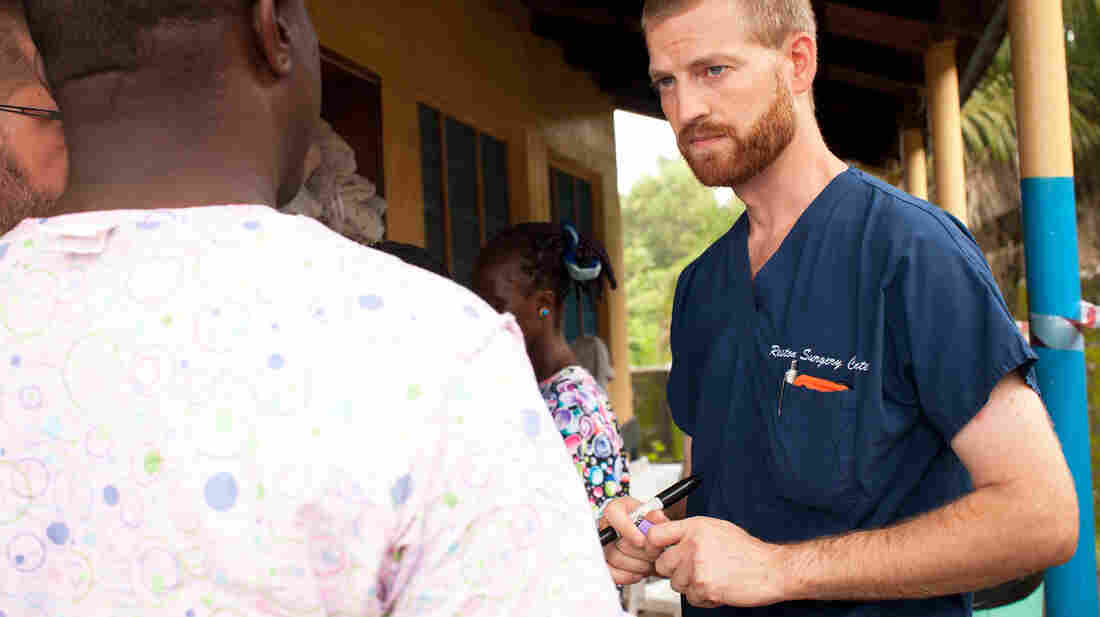 Dr. Kent Brantly, of Fort Worth, Texas, was treating Ebola patients in Monrovia, Liberia, when he himself became infected with the virus. Courtesy of Samaritan's Purse hide caption 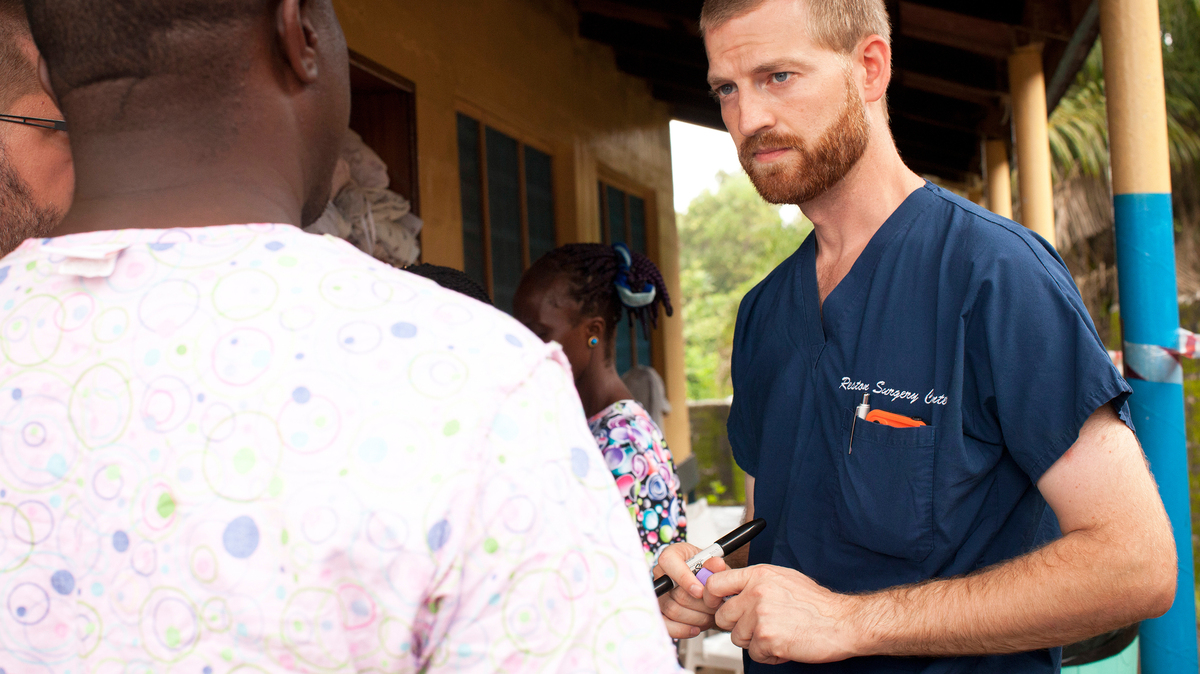 Dr. Kent Brantly, of Fort Worth, Texas, was treating Ebola patients in Monrovia, Liberia, when he himself became infected with the virus.

He didn't need a stretcher — not even an arm around his shoulder.

Kent Brantly, of Fort Worth, Texas, is the first person to be treated for Ebola on American soil. The 33-year-old family doctor surprised everyone Saturday when he walked out of an ambulance and into an Atlanta hospital. 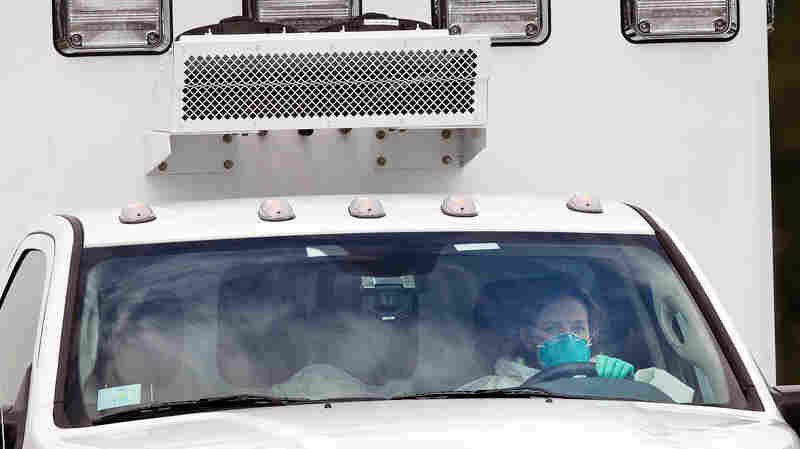 An ambulance departs Dobbins Air Reserve Base in Marietta, Ga., Saturday. Dr. Kent Brantly flew to the base from Liberia and was then transported to Emory University Hospital in Atlanta. John Bazemore/AP hide caption 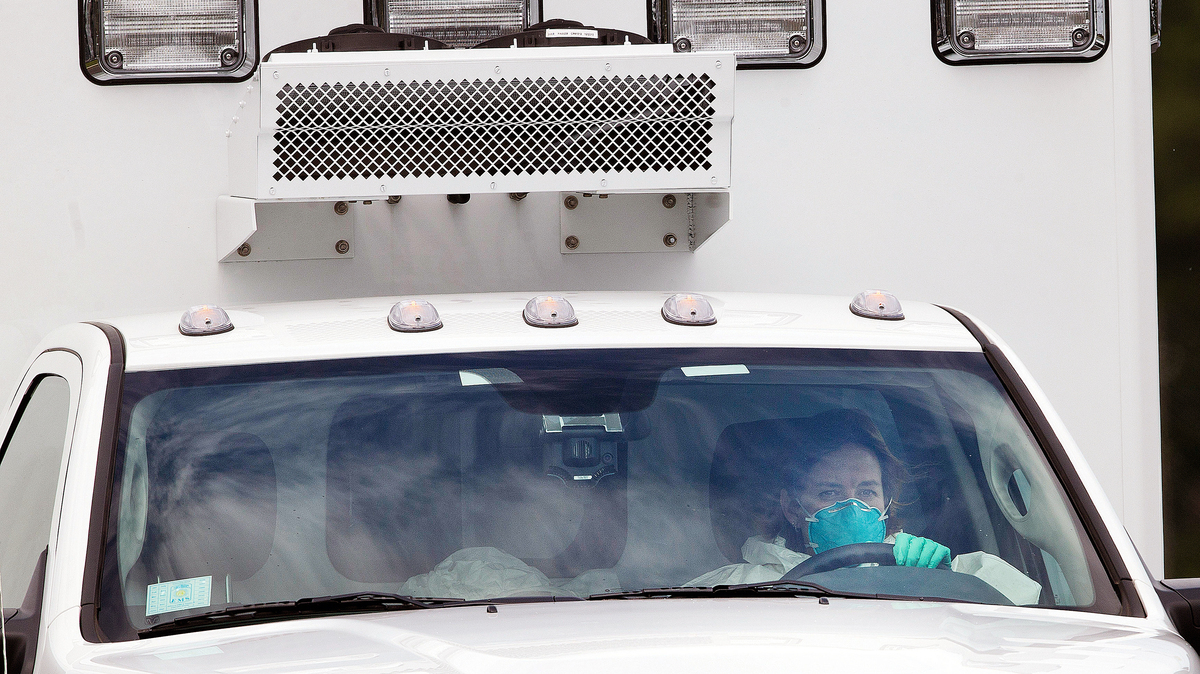 An ambulance departs Dobbins Air Reserve Base in Marietta, Ga., Saturday. Dr. Kent Brantly flew to the base from Liberia and was then transported to Emory University Hospital in Atlanta.

Brantly had just flown in a special air ambulance from Liberia to receive treatment for Ebola in an isolation unit at Emory University Hospital. When he exited the ambulance, he was covered head to toe in a protective suit to prevent spreading the virus. But he stepped into the hospital on his own.

"It was a relief to welcome Kent home today," his wife, Amber, said in a statement Saturday. "I spoke with him, and he is glad to be back in the U.S."

Amber Brantly and the couple's two children were in the U.S. when her husband got sick in Liberia. He was treating Ebola patients at a clinic in Monrovia.

So far, more than 900 people have died in the deadliest Ebola outbreak in history, the World Health Organization said Monday. Nearly all cases have occurred in Sierra Leone, Liberia and Guinea. But the WHO reported three more cases in Nigeria Monday. One of them is a doctor in Lagos, who treated the first Nigerian case, the Associated Press reports. Lagos is African's most populous city with about 20 million people.

Last week, Brantly's condition seemed to have been deteriorating. But now it looks like he's doing better.

One of Brantly's co-workers, Nancy Writebol, 59, also caught the virus while cleaning protective gear at the Ebola clinic in Monrovia. She is in serious but stable condition, the Christian aid group SIM said Saturday on its website.

The medical plane that transported Brantly is returning to Liberia to pick up Writebol and bring her back to Emory's hospital. She's expected to arrive in Atlanta on Tuesday, USA Today reported.

Both Brantly and Writebol received an experimental treatment for Ebola — a blood serum derived from a person who survived an Ebola infection. Brantly also received a blood transfusion from a 14-year-old boy, who recovered from Ebola, Samaritan's Purse said.

In theory, both the serum and blood contain Ebola antibodies that could help the body's immune system fight off the virus. But neither therapy has been thoroughly tested or approved.

The risk of Writebol or Brantly spreading the virus in the U.S. is very low, doctors and infectious disease specialists say.

But in West Africa, the outbreak doesn't show signs of slowing down. Since March more than 1,600 people have been infected with Ebola in Sierra Leone, Liberia and Guinea, WHO. And the outbreak surged last week, with more than 170 new deaths reported in only nine days.

The deadly virus is "moving faster than our efforts to control it," the WHO's director, Dr. Marget Chan said Friday. If the situation continues to get worse, the consequences could be "catastrophic," she said.

In response, the WHO has called an emergency meeting to decide whether the outbreak is a serious concern for countries outside of West Africa. A team of doctors and scientists will meet next Wednesday and Thursday to decide on what's needed to stop international spread of the virus.