Accessibility links
Drug-Resistant Malaria Spreads Across Southeast Asia : Goats and Soda The most effective drug we have against malaria is losing its potency in Southeast Asia. Doctors can still cure most forms of the disease, but it takes longer and more medications. 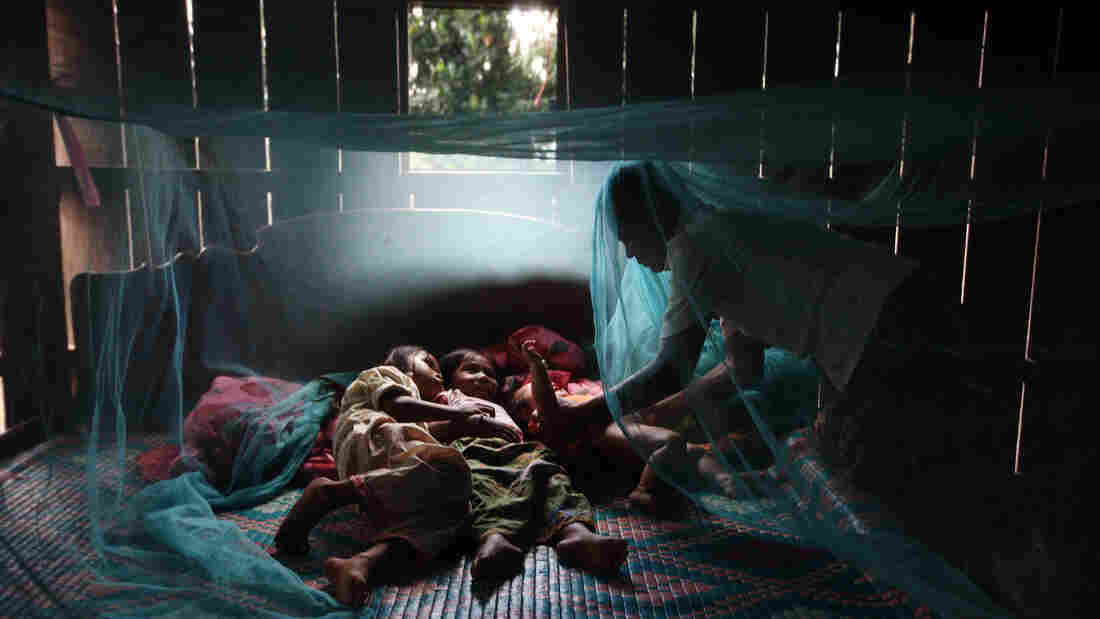 Yonta, 6, rests with her sister Montra, 3, and brother Leakhena, 4 months, under a mosquito net in the Pailin province of Cambodia — an epicenter of drug-resistant malaria. Paula Bronstein/Getty Images hide caption 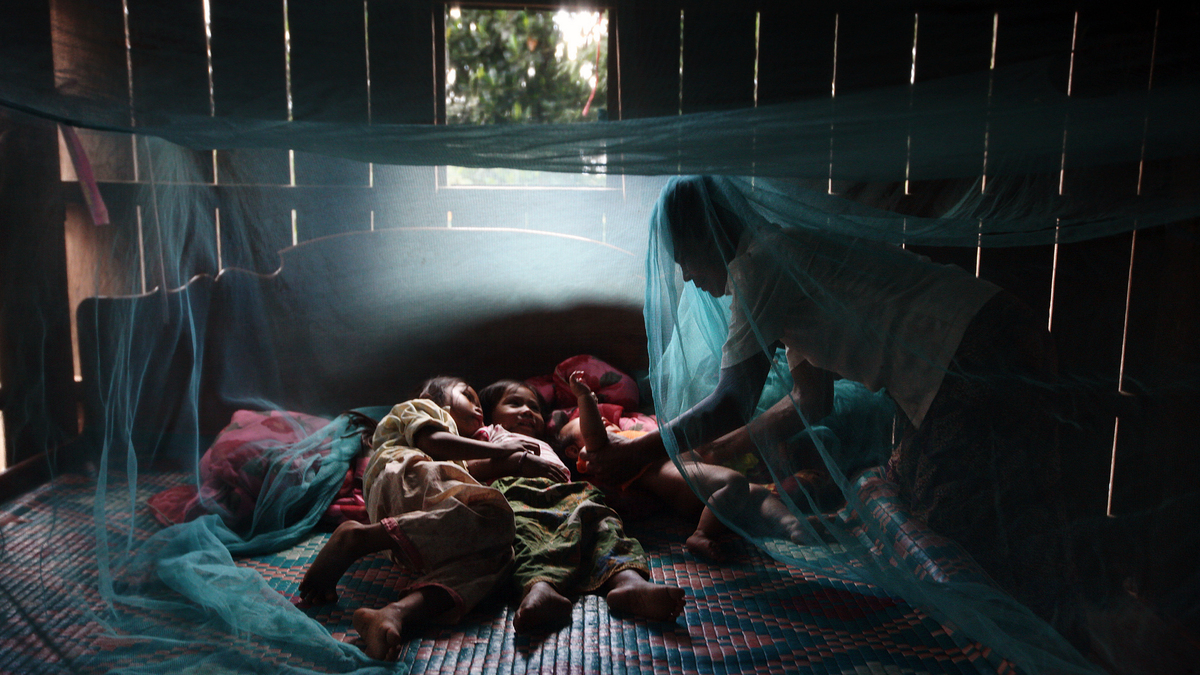 Yonta, 6, rests with her sister Montra, 3, and brother Leakhena, 4 months, under a mosquito net in the Pailin province of Cambodia — an epicenter of drug-resistant malaria.

Back in 2008, doctors in Cambodia made a worrisome discovery. They were having a hard time curing some people of malaria.

Even the most powerful drug wasn't clearing out the parasite from patients' blood as quickly as it should. Malaria had evolved resistance to the last medicine we have against it, a drug called artemisinin.

What do Jesuit priests, gin and tonics, and ancient Chinese scrolls have in common? They all show up in our animated history of malaria.

At the time, scientists thought they might be able to keep this dangerous form of malaria from spreading, says biologist Carole Sibley, of the University of Washington.

"There has been a hope that we could keep drug-resistant malaria in the Pailin province of Cambodia," she says. "That you could launch a massive intervention, cast a ring around it and extinguish it."

Now all those hopes have been dashed.

A study published Wednesday in the New England Journal of Medicine found that artemisinin-resistant malaria is common throughout mainland Southeast Asia. It's cropped up in Thailand, Laos, Vietnam and Myanmar, an international team of scientists reported.

"The take-home message of the study is clear," says Sibley, who wasn't involved in the study. "Drug-resistant malaria hasn't stayed in Pailin."

Although there's no evidence yet that the dangerous type of malaria has spread outside Southeast Asia, scientists are looking for it in Africa and fear it could easily jump over to nearby India.

How The U.S. Stopped Malaria, One Cartoon At A Time

Artemisinin comes from a shrubbery plant, called sweet wormwood. The Chinese have used wormword extracts for thousands of years to treat fevers, and artemisinin drugs were highly effective in Cambodia for decades.

So why has the drug lost its potency recently?

Researchers aren't sure, says Dr. Christopher Plowe, of the University of Maryland School of Medicine, who contributed to the study. "But now that drug resistance has occurred, it seems to be spreading pretty rapidly."

It looks like the parasites in Southeast Asia have picked up a few mutations in their DNA that make it easier for them to evolve drug resistance, Plowe says.

The good news, though, is that artemisinin can still cure nearly all malaria infections when it's mixed with other drugs. "It just takes longer to clear the parasite out of the blood [in some cases]," Plowe says. "Instead of taking a day or two after starting treatment, it can take up to four or five days," he says.

Artemisinin is the last approved drug that can cure any type of malaria around the world. But there are a few new medicines in the pipeline. One from the pharmaceutical company Novartis can clear the parasite from blood in about 12 hours, a preliminary study found.

"The new drug looks promising," Plowe says. "But it's only been tested in very small studies. So it will be some time before that's available."