Accessibility links
Skeptics In Sierra Leone Doubt Ebola Virus Exists : Goats and Soda Sierra Leone is at the epicenter of the Ebola outbreak. But many people there don't think the virus is real. Others are so frightened by Ebola that they're afraid to take sick relatives to clinics. 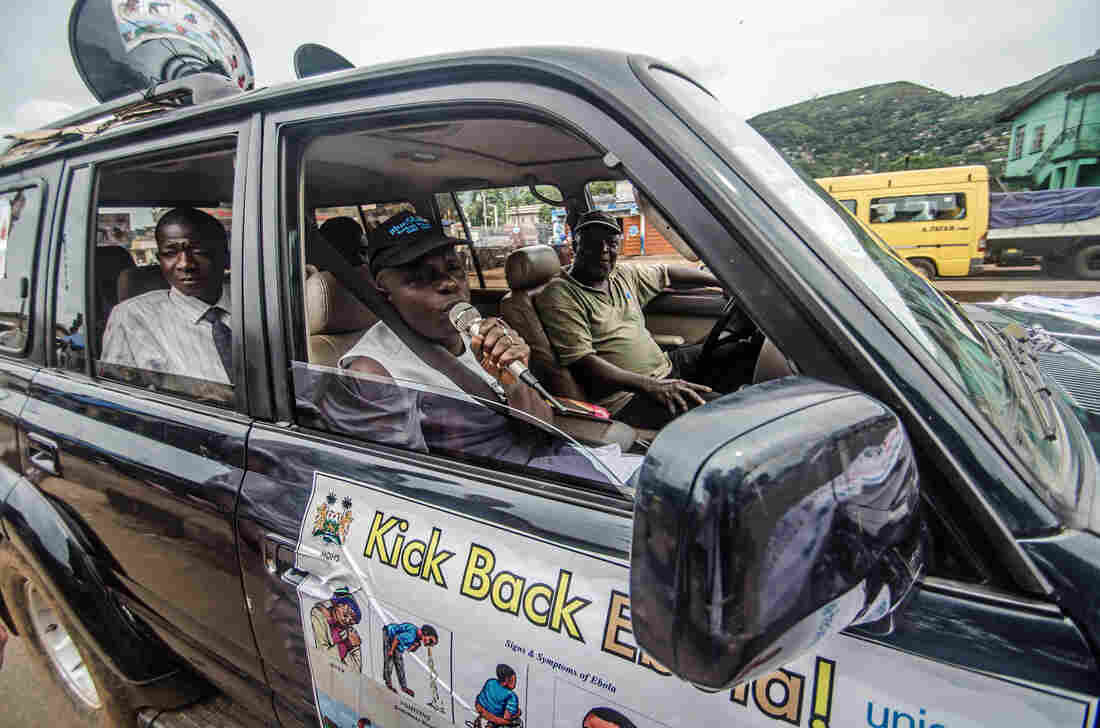 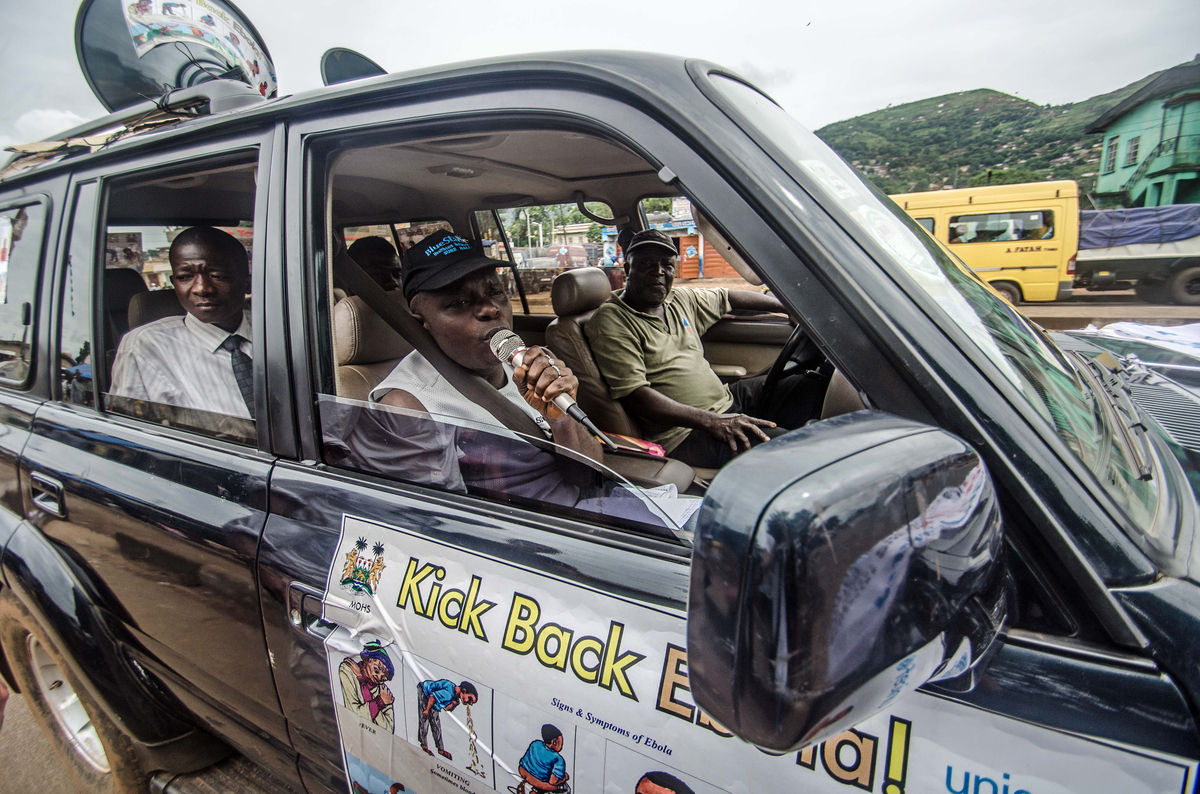 Workers drive around Freetown, Sierra Leone, on Sunday, telling people about the dangers of Ebola.

In response, Ebola awareness announcements are now playing repeatedly on the radio and on loudspeakers up and down the streets of Freetown — Sierra Leone's pretty but ramshackle oceanfront capital. The announcements are part of awareness campaigns to try to stop the virus from spreading.

More than 900 people have died of Ebola in West Africa, the World Health Organization said Wednesday. Sierra Leone, alone, has reported nearly 300 deaths. The WHO is holding an emergency, two-day meeting this week to decide on how to handle the crisis.

Koroma has been criticized for not waking up to the Ebola crisis and taking action earlier. But now he has ordered troops and police to enforce strict new measures, including the quarantine of homes and zones where the virus is detected or suspected, especially in hard-hit eastern Sierra Leone. He addressed the nation on Monday, declaring a "Stay at Home Day" for national prayer, reflection and education.

An Ebola Quarantine In Freetown: People Come And Go As They Wish

"We are a nation of [people who pray]. Ebola is real. This is a collective fight. The very essence of our nation is at stake," he said. "We must act, we must pray, we must persevere."

In bustling downtown Freetown, Yeanoh Papas says she had been living in constant fear of contracting the Ebola virus, especially when her child took ill.

"We've been told there's no cure for it, and because of all the fright around it, we are even afraid of reporting ourselves to the hospital," she says. "My daughter fell sick recently, and I was so frightened I did not take her to the hospital. I called on one of my sisters, who is a nurse, and she came and treated her at home. And now my daughter is well again. Whatever ailment comes our way now, they say is Ebola. So we're all frightened."

But now that Papas understands more about Ebola, she says, she would take her daughter or herself to the hospital if she detected symptoms.

Opinions are mixed, but there's a strong dose of Ebola deniers -- those who don't believe the virus exists at all. Zainab Koroma, a street hawker, is adamant it isn't real.

That's one of the challenges facing Sierra Leone — trying to convince the nation that "Ebola is real, Ebola is here, and Ebola kills," as one poster reads. Some people do survive, if they receive medical care early, as soon as they fall sick.

The case of 32-year-old Saudata Koroma transfixed the nation late last month. She was brought to a faded blue government hospital in Freetown, feeling unwell, and was admitted.

"Yes, and we were suspicious that she had Ebola, and she was put in isolation," says Amadu Sesay, the doctor in charge of the hospital. "The tests proved she had Ebola. Prior to the arrival of the test results, the relatives of the patient stormed the facility. They stormed this hospital and took the patient away."

When his staff learned Koroma had Ebola, Sesay says, they had to track her down. But it took some time. "She was put in an ambulance, but unfortunately on the way to [an Ebola clinic in] Kailahun, she died," he says.

"The question is actually denial. When we traced them [Koroma's parents], eventually, where they kept her hidden, they still were not convinced she had Ebola," Sesay says. "They chased us away. They said she doesn't have Ebola. They denied. That sends a very dangerous message out there."

Sesay and many others say global assistance — such as many more specialists and health workers on the ground — is needed to help Sierra Leone and its neighbors, Liberia and Guinea, control the devastating Ebola outbreak in the region.