Accessibility links
As Ebola Spreads in Nigeria, Debate About Experimental Drugs Grows : Goats and Soda The death toll in the Ebola outbreak has climbed above 900. In response, the World Health Organization will look into whether it's ethical to use experimental medicines in the outbreak.

As Ebola Spreads in Nigeria, Debate About Experimental Drugs Grows

As Ebola Spreads in Nigeria, Debate About Experimental Drugs Grows 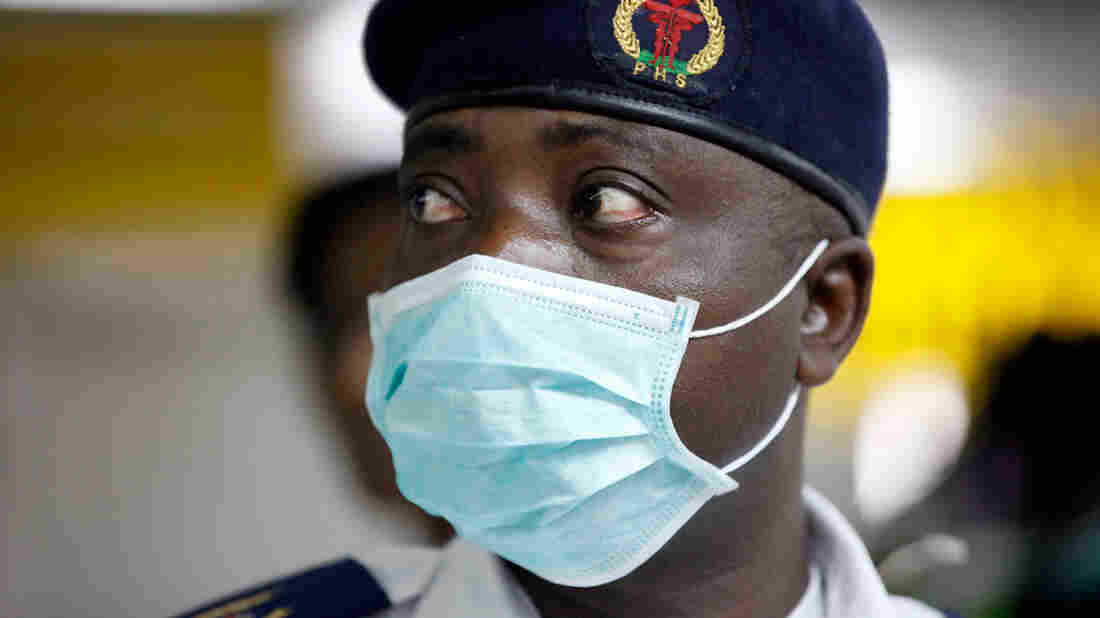 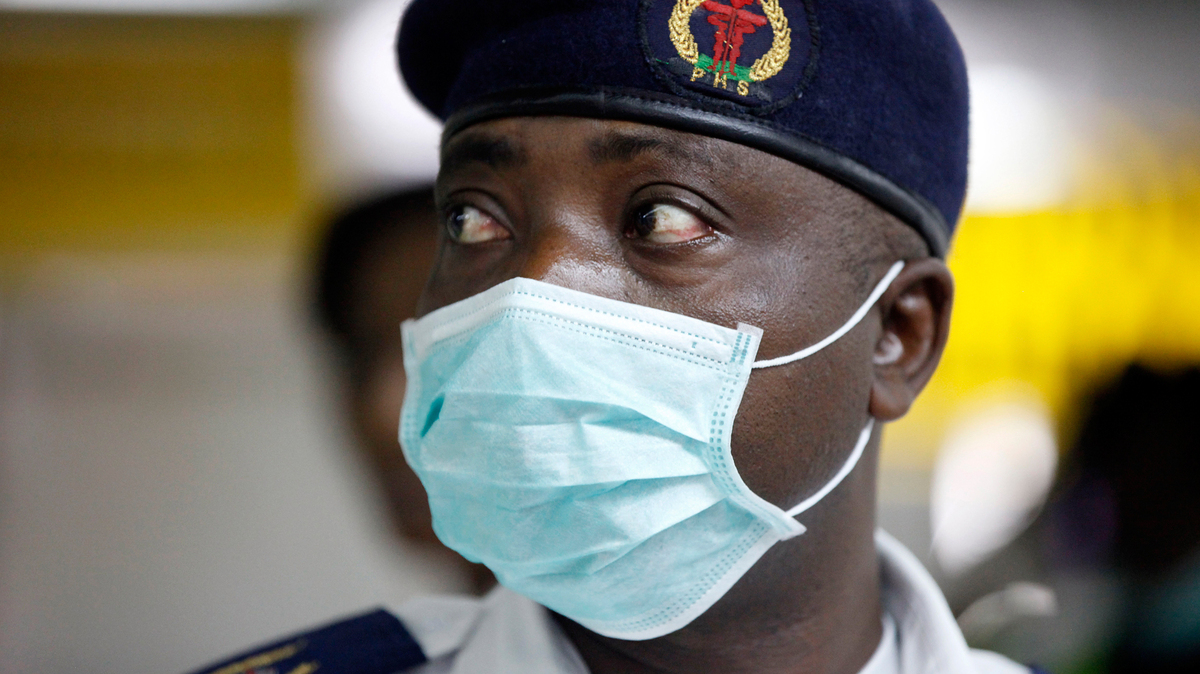 A Nigerian health official screens passengers for signs of Ebola at the Murtala Muhammed International Airport in Lagos on Monday.

As the Ebola virus continues its deadly march through West Africa, keeping track of developments can be a challenge. Here's a roundup of the latest news this week:

The World Health Organization released updated figures Wednesday. The total number of cases — including those considered confirmed, probable or suspected — now stands at 1,711. This includes 932 deaths. 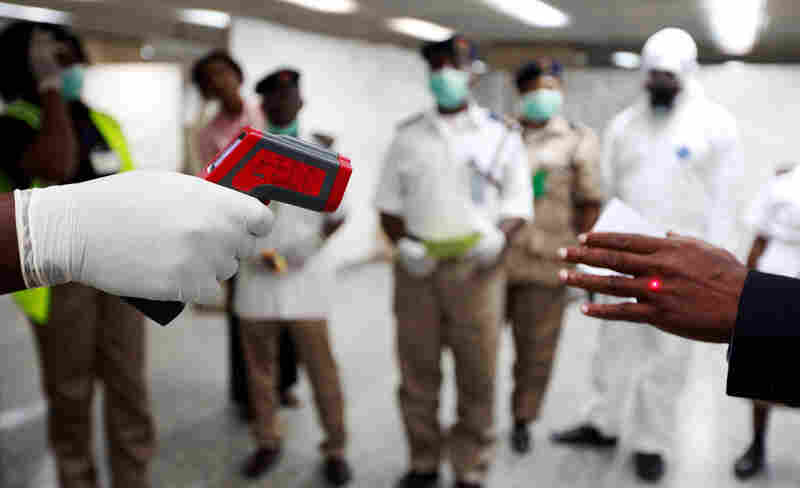 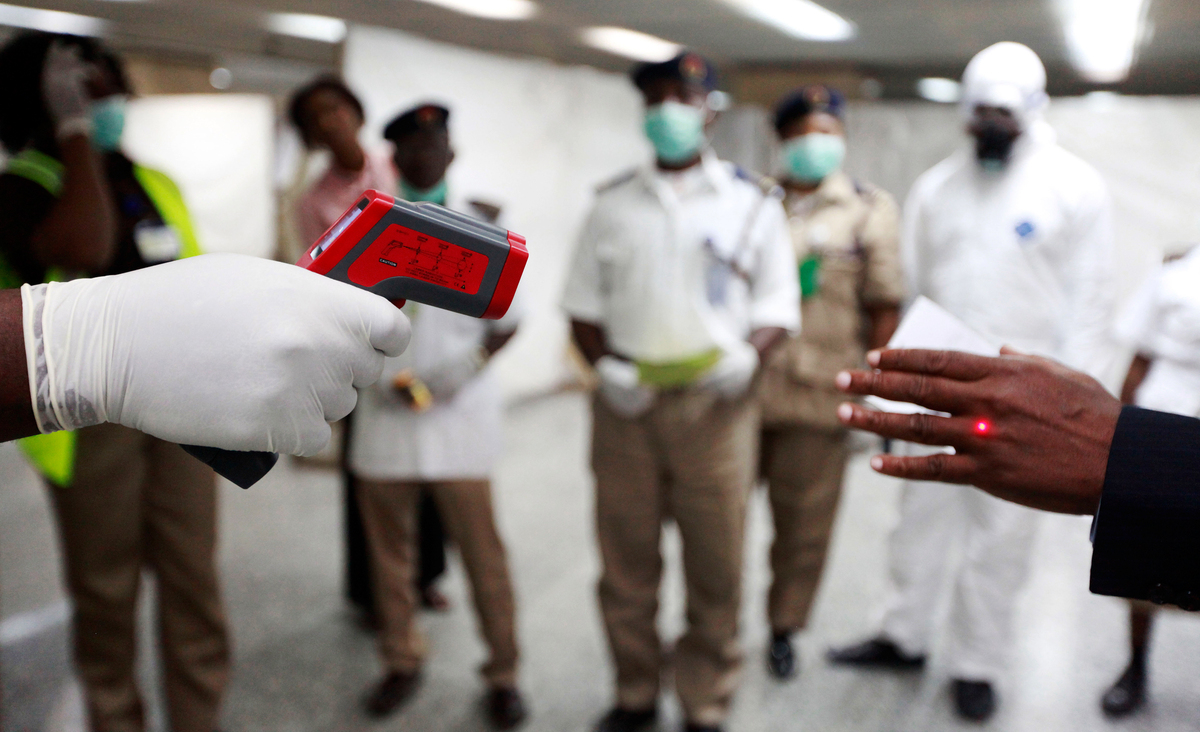 To put that into perspective: Until this year, the world had recorded 1,640 deaths from Ebola since the virus was discovered in 1976. Now more than a third of all people known to have died from the Ebola virus, in history, have died in the current outbreak.

There's also worrisome evidence that the outbreak's strength is growing. More than 100 of the cases this year, or about 6 percent of the total, were reported between Saturday and Monday. And 20 percent of all cases were reported over the last week, from Monday, July 28, through Monday, Aug. 4.

Wednesday night, the Centers for Disease Control and Prevention announced it had raised its emergency alert level to the highest status, Level 1. In a press release, the CDC said it was "rapidly increasing" its efforts, sending more disease-control experts to Guinea, Sierra Leone, Liberia and Nigeria. The statement noted it had also updated its prevention protocols in the U.S.

Next week the WHO will hold a meeting with medical ethicists to look into using experimental Ebola medicines in West Africa.

No drugs or vaccines have been approved for Ebola. But two American aid workers were given an experimental serum at a clinic in Liberia, when they caught the virus in July.

"The recent treatment of two health workers from [the nonprofit] Samaritan's Purse with experimental medicine has raised questions about whether medicine that has never been tested and shown to be safe in people should be used in the outbreak," the WHO wrote Wednesday on its website.

The WHO is also in the middle of a two-day meeting with Ebola experts to consider how to contain the outbreak.

At the top of their agenda: to advise whether the outbreak constitutes a Public Health Emergency of International Concern. That's a formal designation that would open the way for the WHO's director-general, Dr. Margaret Chan, to recommend "extraordinary measures," such as travel and trade restrictions in the region. These would not be binding. But they would carry considerable weight.

Nearly all cases have been in the three West African countries at the epicenter of the crisis: Guinea, Liberia, and Sierra Leone. New cases have been roughly divided between the latter two.

But in another alarming development, the WHO is now reporting nine cases in Nigeria. The Nigerian government has also reported a second death from Ebola — a nurse who treated the first person to die there, Patrick Sawyer, a Liberian-American.

Sawyer apparently contracted Ebola in Liberia and then boarded a plane for Lagos, Nigeria, a city with more than 20 million people. He died soon after in a Lagos hospital.

Nigerian officials had initially stated that Sawyer was identified as a possible Ebola patient at the airport and immediately isolated. But the Lagos state health commissioner conceded Tuesday that, in fact, more than 24 hours had passed before hospital staff recognized Sawyer might have Ebola and took precautionary measures, the Associated Press reported Wednesday.

Five other people who came into contact with Sawyer are now sick with Ebola, Nigerian officials added. And they're following up with others who were exposed to Sawyer.

Saudi Arabia is also testing for a possible first case: a Saudi man who fell ill after returning from Sierra Leone, Reuters reported. He died Wednesday.

Liberia's minister of internal affairs said a Liberian man died of Ebola in Morocco last month. However, the Moroccan government has said that the man died of a heart attack and that tests confirmed he never had Ebola.