Accessibility links
Chermoula: From North Africa To The White House To Your Table : Goats and Soda Guests at the U.S.-Africa Summit were served beef with a Moroccan spice blend. We asked food mavens Marcus Samuelsson and Paula Wolfert to share their recipes. So now you can dine like a diplomat!

Chermoula: From North Africa To The White House To Your Table

Chermoula: From North Africa To The White House To Your Table 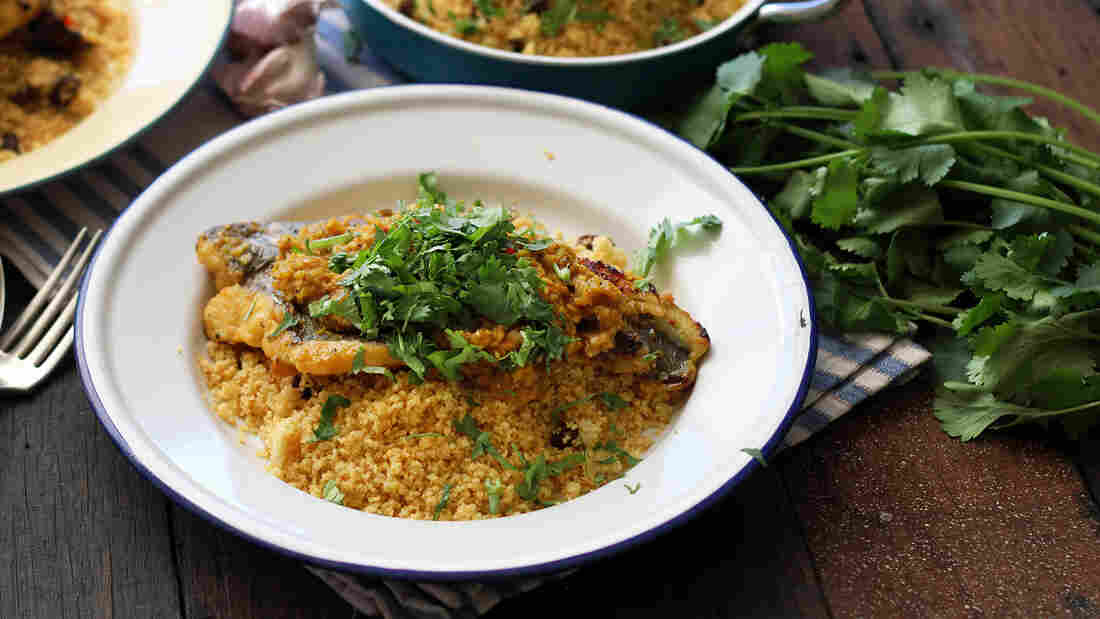 Chermoula is a friend to a fish dish — but also goes well with meat, poultry and vegetables. a_b_normal123/Flickr hide caption 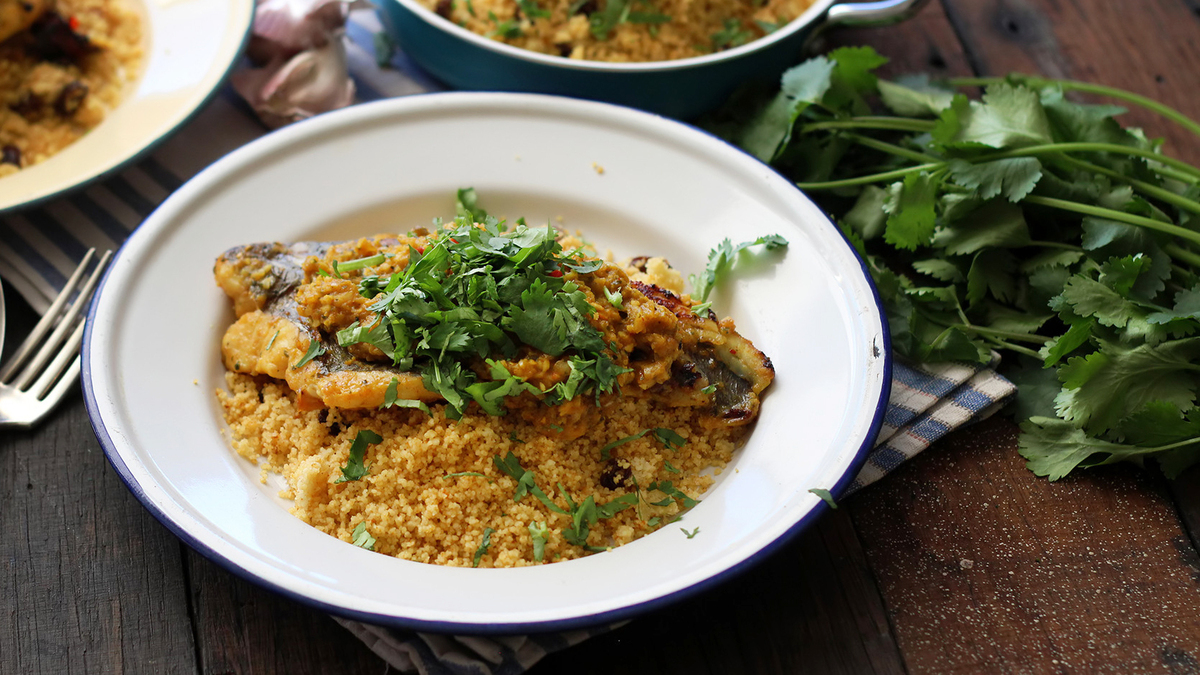 Chermoula is a friend to a fish dish — but also goes well with meat, poultry and vegetables.

Making An All-American White House Dinner With Some African Flair 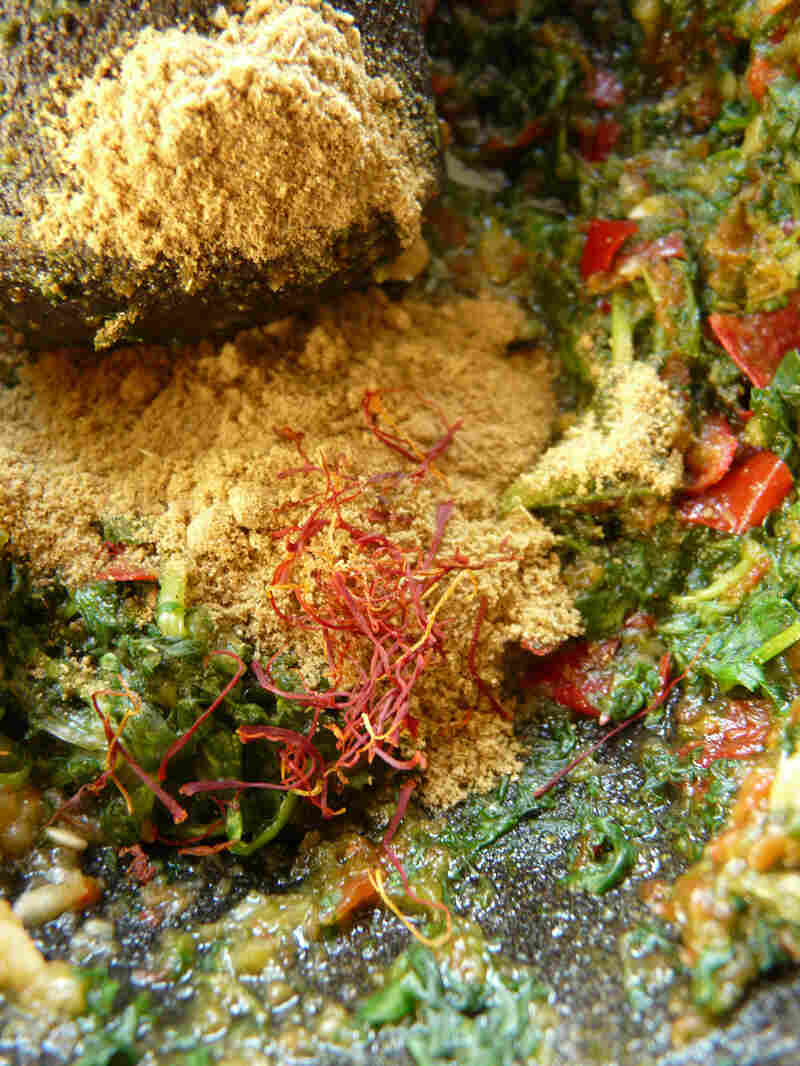 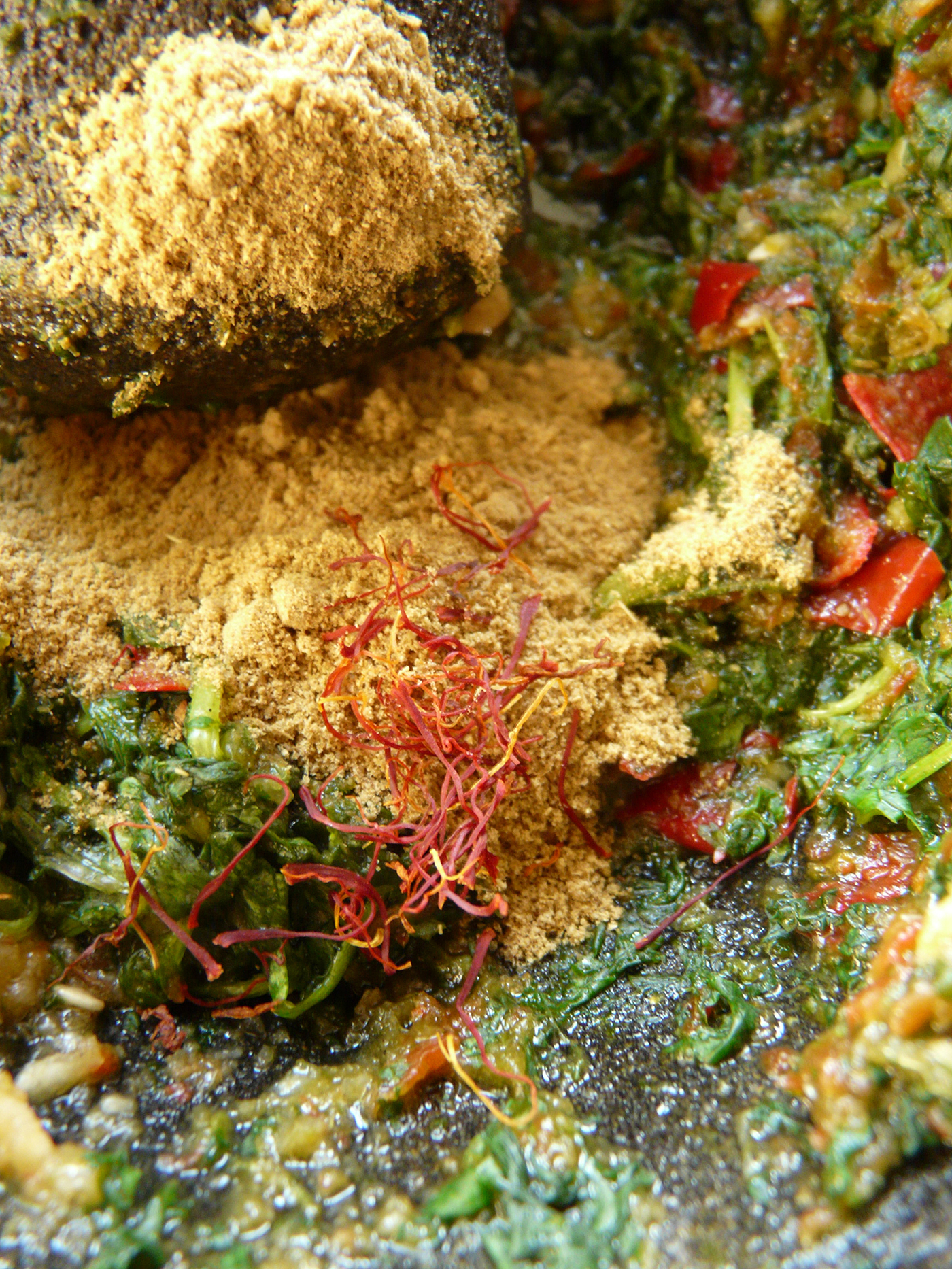 Chermoula ingredients can include cilantro, cumin, garlic and saffron.

If you weren't on the guest list for Tuesday's U.S.-Africa Leaders Summit dinner, no need to feel left out. We've got the inside scoop — and a few recipes — for one of the meal highlights.

The White House served tender slabs of Wagyu beef, with a side of sweet potato puree and braised collard greens. To add a bit of African flair, the chefs rubbed on a marinade native to North Africa: chermoula.

Born in Morocco, chermoula is a blend of spices like coriander and cumin along with fresh chilies, giving it a rich herby and spicy taste. Olive oil turns the combo into a paste.

The blend is the heart of Moroccan food, says Marcus Samuelsson, the renowned Ethiopian-born, Swedish-raised chef who specializes in African cuisine. "It has a hint of floral and it has flavor, but it's not super spicy," he says. "That's why it's not offensive." From its traditional use to flavor grilled fish, chermoula has spread to beef, chicken, even vegetables.

It's also spread beyond its country of origin, used in Tunisia, Algeria, even the south of France (not to mention Washington, D.C.). Each region makes it a bit differently.

"There is no one recipe for charmoula," writes the James Beard award-winning cookbook author Paula Wolfert in The Food of Morocco. [Clearly, there is no one spelling, either, since it's a transliteration of an Arabic word.] "In Marrakech, a cook might add some ginger to the spice mix. In Agadir, creamed onions are often added. In Tetouan, a little hot red pepper oil, and in Tangier, our housekeeper always added a little thyme."

Moroccans often start with a classic spice blend called el ras hanout, or "top of the shop," commonly including cumin, cardamom and coriander. But each spice vendor will put a special spin on the blend. Home cooks add their touches — fresh-cut dill for some, roasted chilies for others, says Samuelsson.

He adds that the popularity of chermoula is illustrative of the pride Morocco takes in its spices.

"Anytime you say chermoula, people think flavorful, and they smile and they want to have it with their meal," he tells Goats and Soda. "They're expecting a spice rub that is delicious."

So what's his recommendation? Rub a generous amount on a chicken, and roast. Cook some rice with two teaspoons of chermoula mixed with oil to go with the chicken. Or if poultry is not your thing, rub the marinade onto a juicy piece of steak and let it sizzle.

This recipe is reprinted with permission from Marcus Samuelsson's Soul of a New Cuisine.

Combine the garlic, parsley, cilantro, lemon zest, paprika, chili powder and cumin in a blender and blend on low speed to a coarse puree; don't process until smooth. With the blender running, add the oil in a thin, steady stream and blend until a thick paste forms.

Store in a tightly covered container in the refrigerator for up to 2 weeks.

This recipe is reprinted with permission from Paula Wolfert's The Food of Morocco.

This recipe is reprinted with permission from Paula Wolfert's The Food of Morocco.

This recipe calls for two-step cooking. First you bake the eggplant slices, then fry them in oil. The initial baking will keep eggplant slices from absorbing too much oil during frying.