Accessibility links
You Asked Questions About Ebola — And We Have Answers : Goats and Soda Where did it start? Why are some patients able to survive? Shouldn't we be more concerned about malaria? Dr. Darin Portnoy of Doctors Without Borders answers your queries. 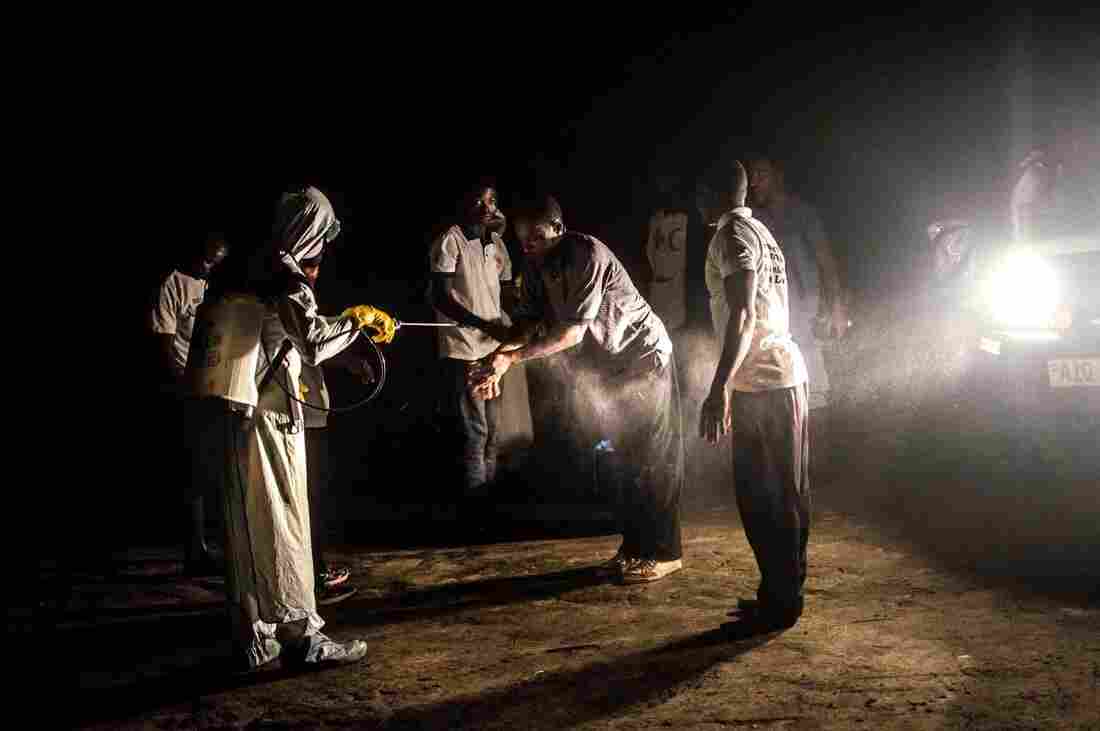 Members of a Red Cross burial team are disinfected after removing the body of an apparent Ebola victim from a home in Pendembu, Sierra Leone. Tommy Trenchard for NPR hide caption

This week, we asked our readers for questions they have about the Ebola outbreak in West Africa.

For answers to some of the queries, we turned to Dr. Darin Portnoy, vice president of the international board of Doctors Without Borders (known by its French initialism MSF, for Medecins Sans Frontieres). (Basic facts about the disease can also be found in our Ebola 101 primer.) 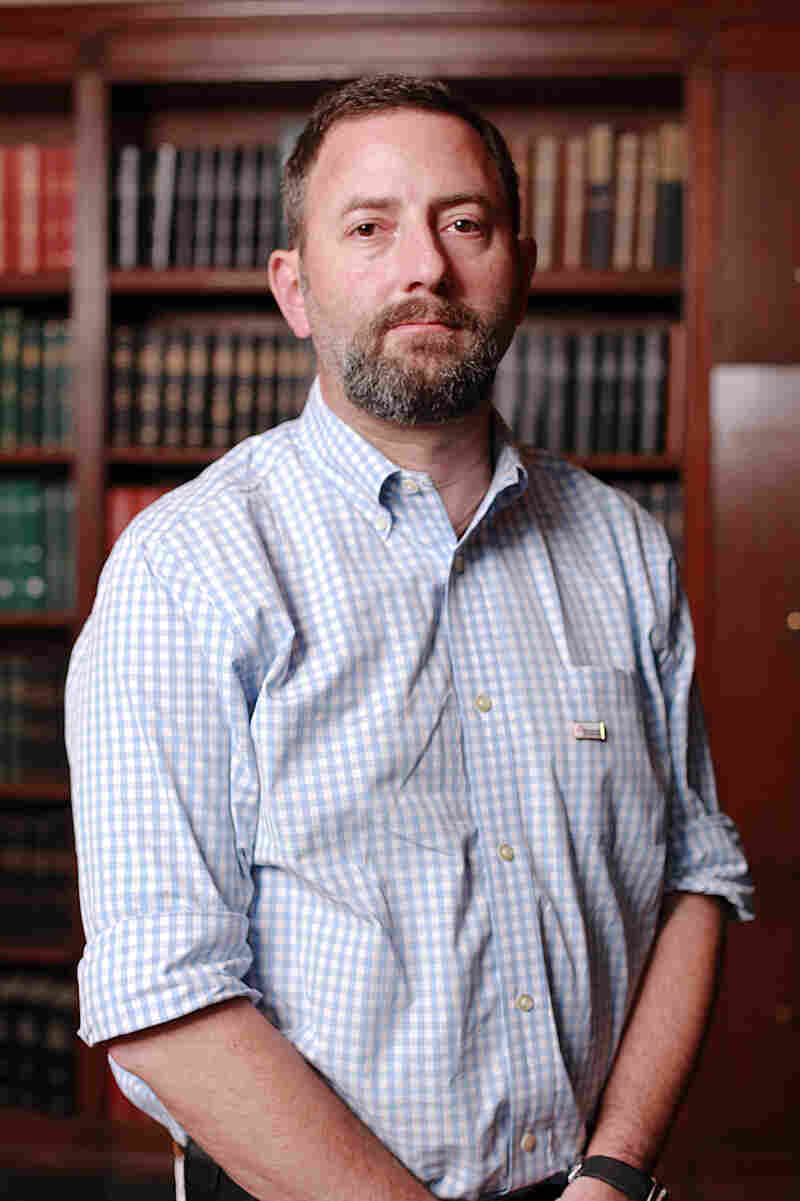 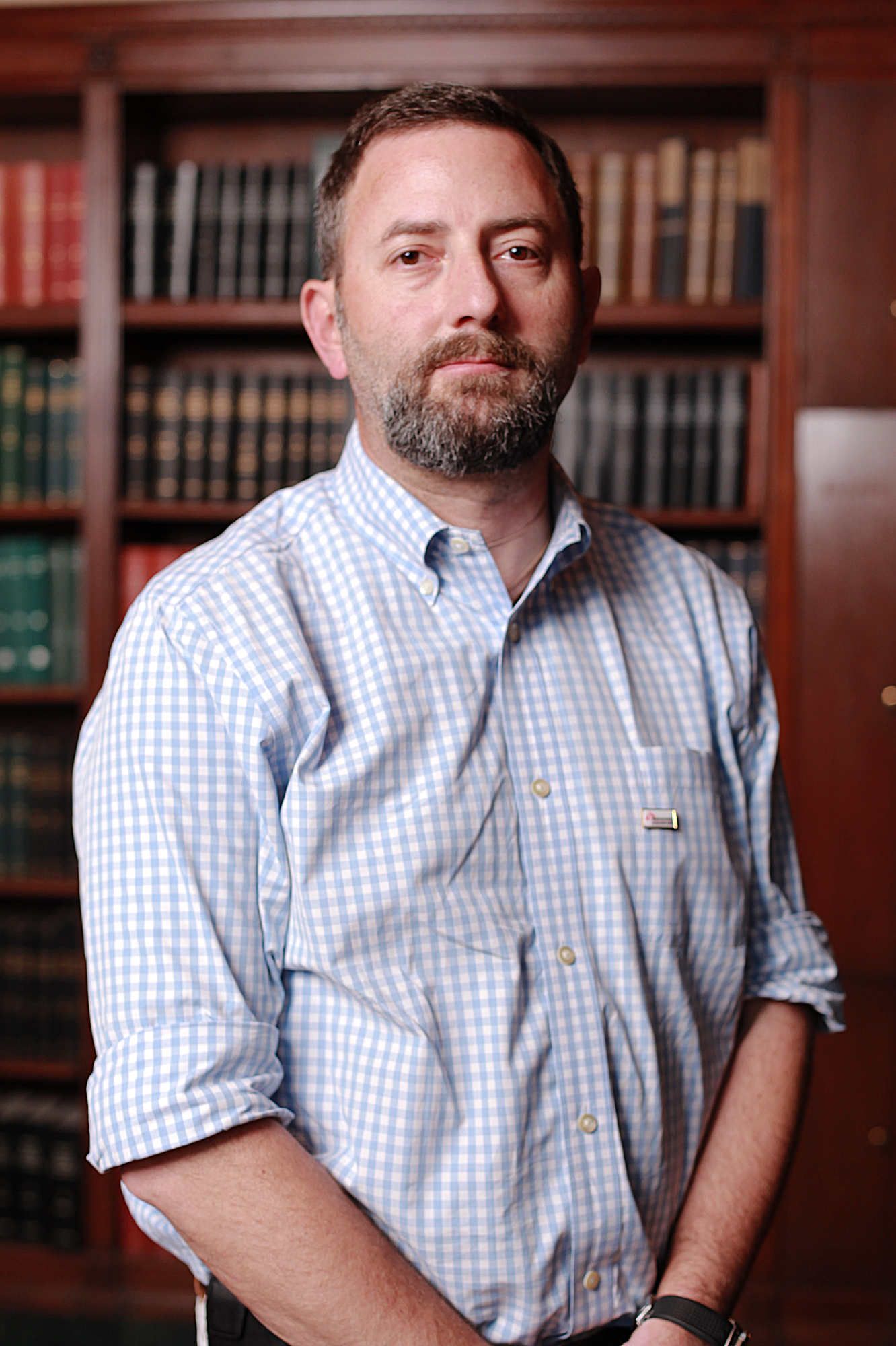 Dr. Darin Portnoy is a past president of Doctors Without Borders and vice president of the international board.

Courtesy of Doctors Without Borders

If you have a question not answered here, ask it in the comments below. We will consider additional questions in the week ahead.

Is it known in which species Ebola originated? Is the virus always around? Why does it pop up?

Could Ebola mutate and become an airborne virus?

Viruses change, and they can change over time. But there are no reports or evidence [Ebola] has ever been transmitted any other way than through direct contact of bodily fluids.

What is the prognosis for an Ebola survivor?

Renal, kidney, liver or lung function can take quite some time to recover. If a patient goes into shock, it can affect the heart muscle, and the heart may not ever recover. A shocklike state can decrease blood flow to the brain, decrease oxygen, cause some irreversible changes. Each case is different.

If the health care workers followed all precautions to protect themselves, how did they contract Ebola? Human error just doesn't seem a good enough answer.

Health care workers are at risk because of their proximity to sick people.

They have excellent gear. But despite the very best precautions, we know individuals have been affected. Among our staff [at MSF facilities] this has not happened. We take extraordinary steps. We buddy up two people, and they really look out for each other. There are methodical protocols for care of our patients. I can't speak to what happened to [health care workers who were infected]. I can imagine that all the supplies, tools and resources [for protection] may not have been available at every clinic. And it's not always clear right at the start that a patient may have this illness versus something else. The initial manifestation of Ebola is not so different from other illnesses that cause high fever and gastrointestinal symptoms.

I hear the survival rate is something like 6/10 but wonder if that has anything to do with living conditions and medical facilities in Africa? Would a U.S. outbreak have the same mortality rate?

Survival rate is a range. It depends on a lot of factors about the individual: co-morbidities [other medical conditions]; when they came to the facility [for care]; how advanced the virus was. The death rate can range up to 80 to 90 percent or as low as 40 percent in this particular outbreak. The Zaire strain [responsible for the current outbreak] is going to have a higher case fatality rate than most other strains of Ebola. The answer to survival, considering all those other factors, is supportive care. But there is not some particular intervention that we know of right now that's going to slow [Ebola] or reverse it. We just need to support the body's functions. Hopefully over time the body can develop antibodies and mechanisms to reverse what the virus does.

But Ebola is a very bad actor. Even in the best locations, it's going to be very tough for individuals to survive. To treat individuals in a resource-poor center is even more challenging. In our organization, numbers are lower in terms of case fatality because of our experience, early identification and comprehensive management. But we've had a lot of deaths, as well, despite our very best efforts.

Since everyone seems to be panicking, is there any possibility of an American epidemic?

Our real interest is what's going on in West Africa. I think the best answer is we have an excellent public health care system [in the U.S.], a great capacity to quickly identify and isolate individuals to prevent transmission. We don't see this as something that would happen here [in the U.S.]. I think I can say I don't think that [an American epidemic] is a likelihood. I hope your readers are really going to keep the focus on what's happening in West Africa.

How do you decontaminate a room used by a patient with Ebola?

Cleaning agents that kill the virus are used. We wash [the room] down, spray it down, take care of any bodily fluids and refuse. Anything used in care of the patient has to be properly disposed of or incinerated. It's a comprehensive methodical approach. It's rigorous. There's no room for mistakes.

How can I help?

Two things. One would be to [convey] the correct information about the disease. And that the risks outside of Africa are not great.

The other thing, if [people] feel so moved, is to support organizations working hard to treat patients with this disease. We [at MSF] are part of a response, but we are at our maximum. We have over 700 people working on this. We've been saying for quite some time there needs to be a comprehensive response. WHO now recognizes this [and] is developing plans for each country [affected].

Why doesn't malaria get this kind of coverage?

Ebola is a deep public health concern that's happening now. It's shocking, it's scary and it's progressing. It's a disease that typically is not on this scale. And it's a disease that we don't have a lot of ability to respond to.

I can understand why people are so fearful, even if the numbers of those infected or dead are not as high as for malaria or tuberculosis.

But I don't think Ebola should take away from the focus we have on other illnesses. We continue to work on diseases like malaria and respiratory illness. I don't think it's one over the other.