Accessibility links
Graphic Warnings: Ebola Posters Keep The Virus On People's Minds : Goats and Soda Sierra Leone is at the epicenter of the Ebola outbreak. To help stop the virus, health workers are putting up Ebola awareness posters around the country. One doctor explains why they're so graphic. 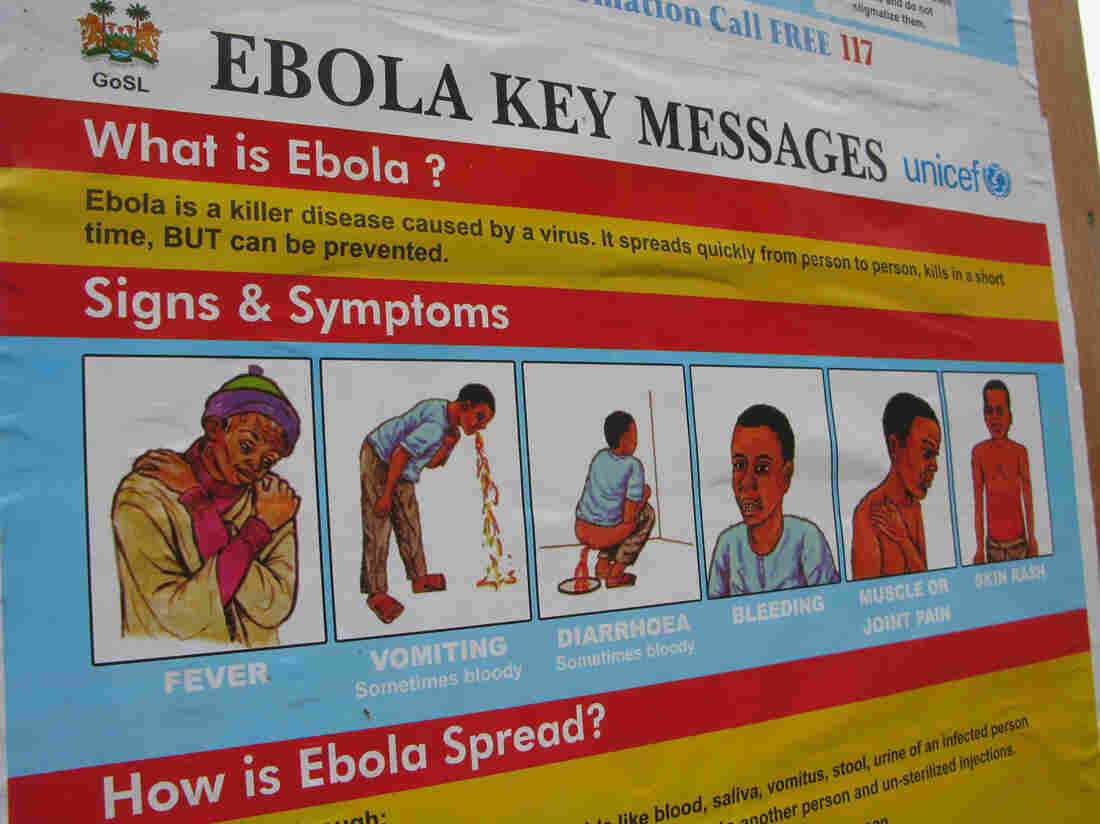 "Kick Back Ebola": A poster campaign throughout Sierra Leone uses graphic illustrations to educate people about how to detect the deadly virus. Ofeibea Quist-Arcton/NPR hide caption 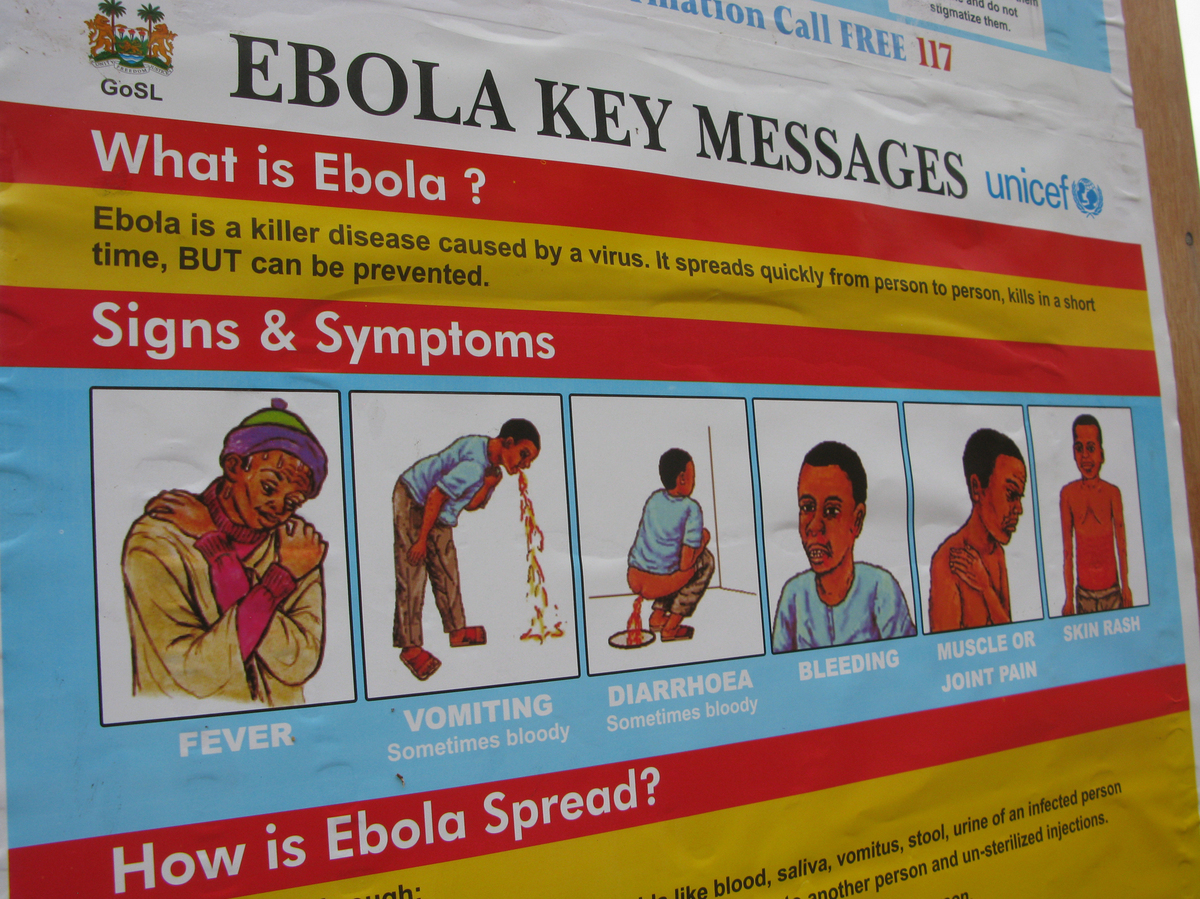 "Kick Back Ebola": A poster campaign throughout Sierra Leone uses graphic illustrations to educate people about how to detect the deadly virus.

The campaign is called "Kick Back Ebola." But the posters pack a punch.

Sierra Leone has reported over 700 suspected Ebola cases, more than any other country this year. To help stop the outbreak, health workers have put up Ebola awareness signs all over Sierra Leone's seaside capital of Freetown.

Posters are pasted on hospital walls and outside clinics. Banners flutter along main streets. The goal of the campaign is to keep the reality of Ebola — and how to detect it — very much alive in people's minds.

Ebola Outbreak Is A Global Health Emergency, WHO Says

To learn more about what the posters mean, and why they're needed, NPR's Ofeibea Quist-Arcton talked to Dr. Amadu Sesay, the medical superintendent at the Kingharman Road Government Hospital in Freetown.

Their conversation has been edited for clarity.

Dr. Sesay, we're looking up at a Kick Back Ebola awareness campaign poster. They're rather graphic illustrations. Why are they so graphic?

They are so graphic because you have to be mindful of the environment we live in. Not many people are literate in this country. Therefore, most of the information we want to disseminate out there, to the general public, we have to have graphic pictures, to get the message out. And, of course, for emphasis. 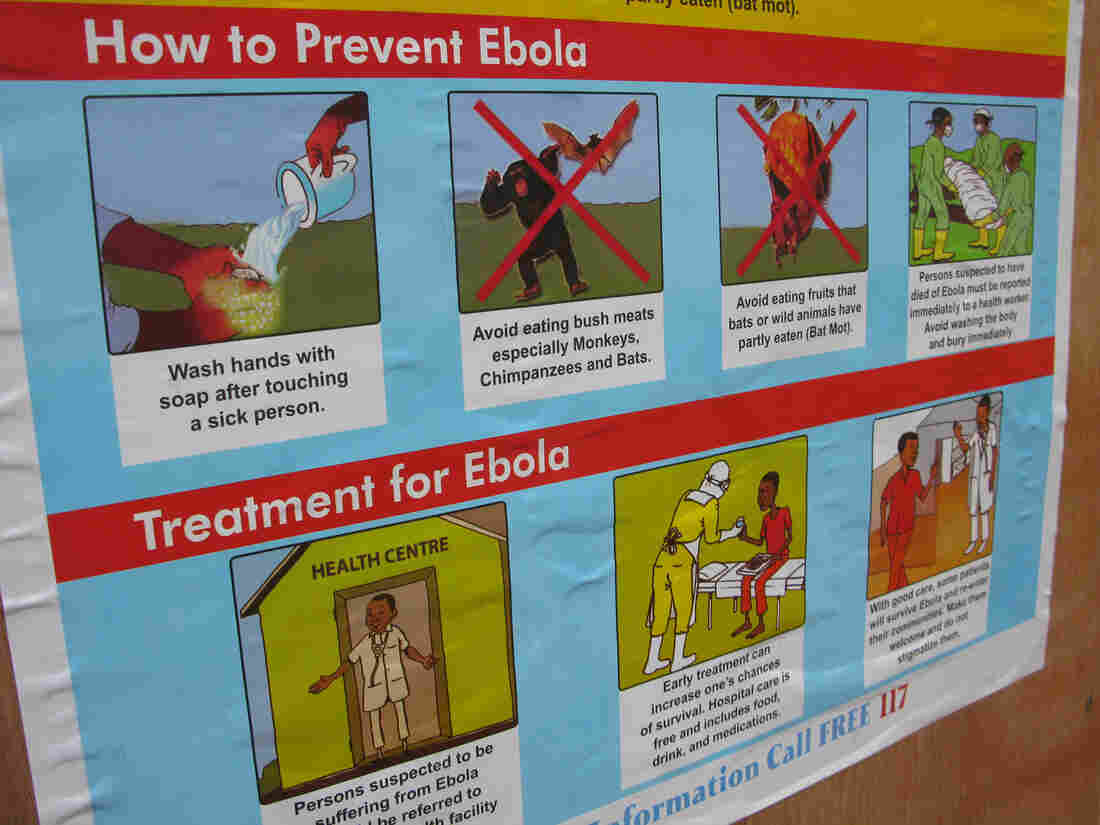 How do you prevent the spread of Ebola? Wash your hands, avoid bush meat and don't touch corpses. Ofeibea Quist-Arcton/NPR hide caption 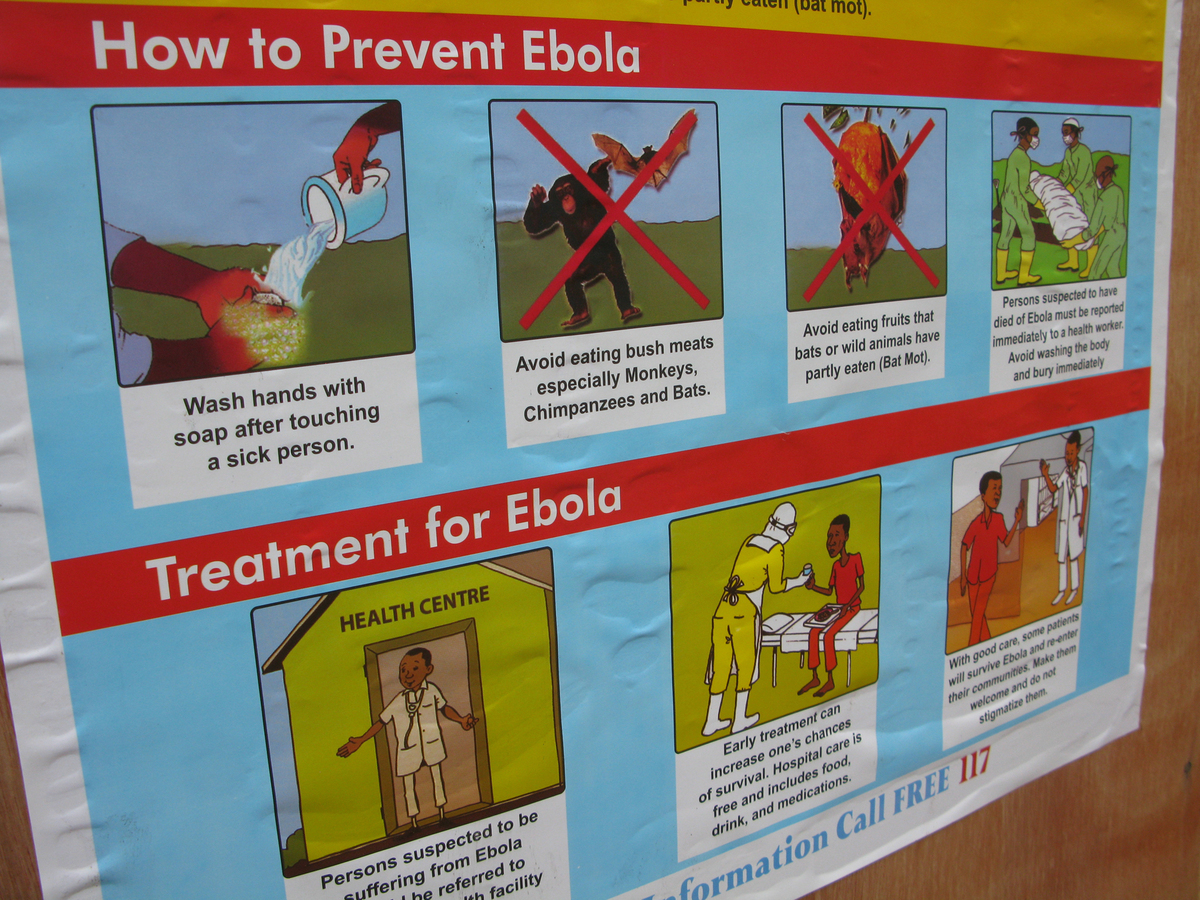 How do you prevent the spread of Ebola? Wash your hands, avoid bush meat and don't touch corpses.

Can you kindly describe the posters?

These pictures actually show some of the symptoms and signs that are associated with the Ebola virus infection:

These pictures are actually this graphic, I think, to get the information out to the masses, especially those of lower socioeconomic status, who can't read.

And, of course, the posters illustrate the advice that goes out to everybody: Wash your hands!

Oh yes! This is a general public health intervention. Hand washing has been shown to be very effective when it comes to preventing the mass transmission of diseases — not just Ebola, but cholera and other contagious diseases.

And in general, hand hygiene will definitely go a long way to help reduce the load of germs, bacteria and viruses on your hands. So frequent and regular hand washing is something that is, first of all, easy and accessible. It's something that can be done, even in the simplest environment, with just soap and water. This can go as far as the village setting.

In this "How To Prevent Ebola" poster, we also have a picture of a monkey and a bat with a giant, red X across them. What's that for?

The X you see in red there, across those wild animals, says, "Avoid eating bush meat, especially monkeys, chimpanzees and bats."

The other X there on the bat says, "Avoid eating fruits that bats or wild animals have partly eaten."

That route of transmission can be broken if this message gets out there and people heed it — that you should avoid eating meat or bush animals, especially monkeys and chimpanzees, which have been shown to be hosts for these viruses. That is the message that is being sent out there.

And then we have what looks like an apparent burial. What does that mean?

That is another intervention to limit the spread and the transmission of the virus. In the event of a death, the deceased or the corpse has a high tendency of being a reservoir of the virus if that person died of Ebola.

So the corpse is toxic and infectious?

The corpse is very toxic. And people coming into contact with the deceased or corpses are at very, very high risk of getting the virus. So that again is a message that is sent out there [through the posters].

And you can see from the poster that the people that are actually touching the corpse are trained and dressed in protective gear. And the corpse has been well-wrapped, inside a body bag. They bury the body in a very ordered fashion, to avoid contact, to avoid transmission of the virus.

And then the other illustration, let me read it: "Persons suspected to be suffering from Ebola should be referred to the nearest health facility immediately."

This needs to be done at the community level. We need sick people to access hospitals, to get prompt attention and diagnosis.

And then, subsequently, the poster reads, "Early treatment can increase one's chances of survival."

We have seen cases, we have heard of cases of survival — people that have been discharged, who have recovered from the disease.

So if people cooperate and get sufferers to come to the hospital in time, then that increases their chances of survival.

"Hospital care is free and includes food, drink and medicine," the poster reads. Yes. There are funds, and there is support for people who are diagnosed with Ebola, even suspected cases. Clinics have medication and treatment that is free of cost, that is provided in hospital settings.

Then, with good care, there is an increased chance of survival.

And there we see a smiling health worker and a smiling survivor.

Smiling survivor, yes! Someone who has survived the disease, has actually been discharged from the hospital setting. And that is the last picture you see there. The health worker is happy, and everybody is happy.

And then, critically, Dr. Sesay, the poster says, "With good care, some patients will survive Ebola and re-enter their communities. Make them welcome. Do not agitate them." That's key isn't it because there's a stigma associated with surviving Ebola, right?

Oh yes, oh yes. There's an element of stigma and discrimination against patients who are diagnosed with Ebola. In the event, when someone goes through the treatment and has tested negative and is proved to have recovered from the virus, that patient should not be discriminated against and should be allowed to reintegrate into their communities.

They are deemed safe to interact with. That statement has to be made by the health authorities or the health workers that have treated that particular individual.

So that picture on the poster is to dispel the stigma and the discrimination against those patients who were diagnosed with Ebola.

And are Sierra Leoneans heeding the messages on the Kick Back Ebola posters?

Yes, they are heeding the messages. If you go to most public places, offices, restaurants, supermarkets and hotels, you'll find buckets full of chlorine solution, and people are washing their hands before going into those premises.

And the sale of wild animals and bush meat has dwindled dramatically over the past few months. People are heeding the message to avoid factors that are responsible for transmitting Ebola.

Even in the rural areas?

Yes, I believe in the rural areas, too, because this is in partnership with NGOs, UNICEF, the World Health Organization and others. It's a nationwide campaign, and so rural areas also have these posters out there.

The approach regarding dissemination is multilateral, in the sense that we're making use of radio programs, jingles, posters and T-shirts, to say what should be done, and what should not be done, to limit the possibility of spreading the virus.

Aren't people put off by the graphic illustrations, even though they're meant to show how to prevent Ebola?

I would like to think that isn't the case. The graphic pictures are a bit exaggerated, so that people appreciate the gravity of the situation, so that the purpose is not missed. There is no harsh way of presenting the information for something as serious as Ebola.