Accessibility links
A Fiasco At The Burial Ground, A Prank At The Shop: Covering Ebola : Goats and Soda Jason Beaubien reports on his body temperature (you won't believe it), a burial fiasco (you won't believe that either) and a prank that made his driver laugh. 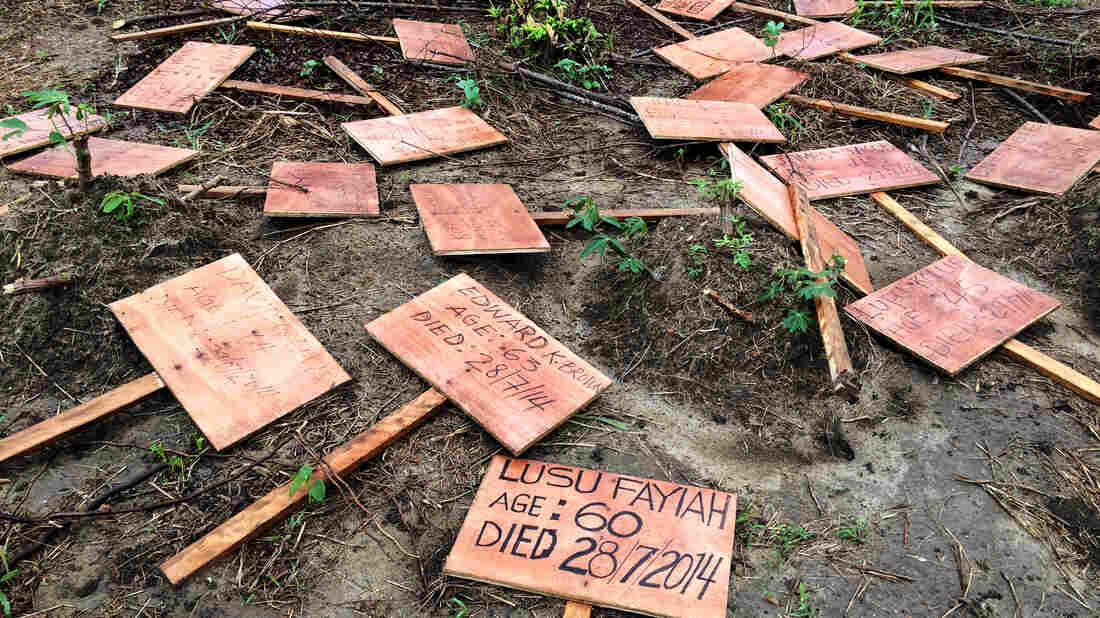 The makeshift markers for graves of Ebola victims lie scattered in a burial site located on swampland, some two hours from the capital city of Monrovia. Jason Beaubien/NPR hide caption 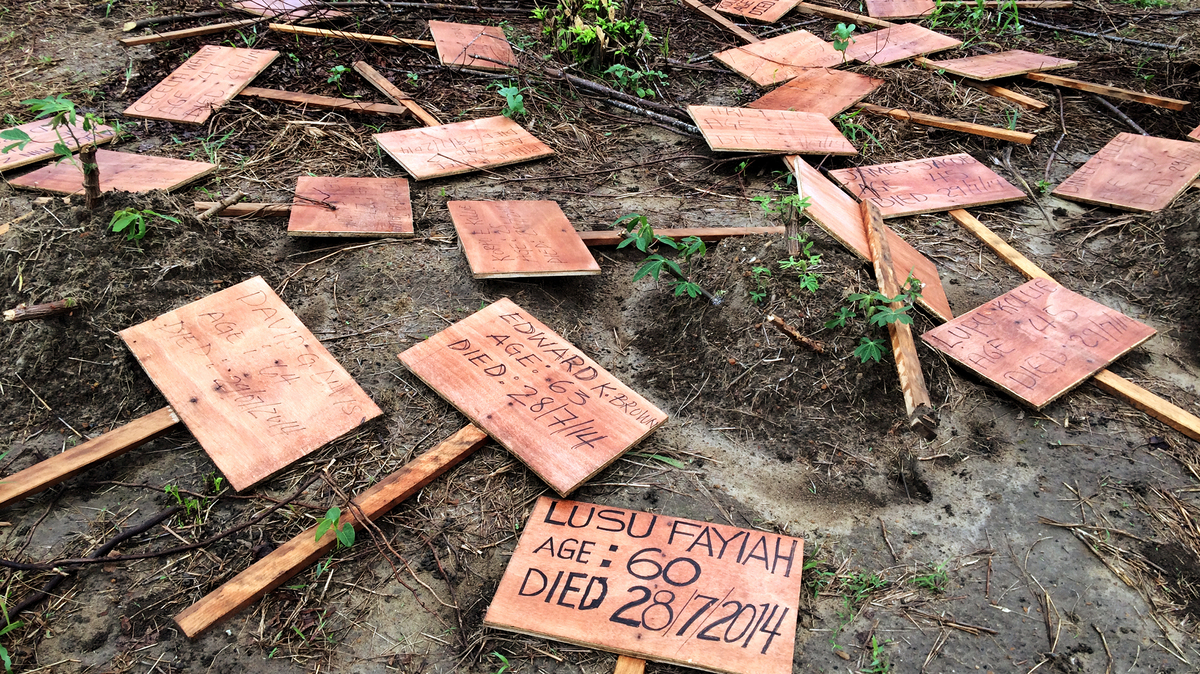 The makeshift markers for graves of Ebola victims lie scattered in a burial site located on swampland, some two hours from the capital city of Monrovia.

NPR's global health correspondent Jason Beaubien tries to keep his cool when traveling abroad. But he may have set a new record for chillness.

En route to Liberia to cover the Ebola outbreak, he flew out of Sierra Leone's Freetown airport. Like all passengers, he had his body temperature measured by an ear gun thermometer. The reading: 32.8 degrees centigrade (roughly 91 degrees Fahrenheit).

A 95-degree temperature can mark the onset of hypothermia; at 91 degrees amnesia can kick in. But Jason remembers (and has photo proof) of that clearly erroneous temperature reading.

The authorities were not troubled and let him board his flight.

If that was a comedy of errors, in Monrovia, Beaubien found a tragedy of errors when it comes to burying the dead.

There have been over 350 Ebola deaths in Liberia. How are the bodies being handled?

The government is having a really hard time finding places to bury the bodies because nobody wants them in their community.

The government bought this land [for burials] in a quite remote spot. There isn't even a village that close to it, just some little shacks. But it's near the settlement of Johnsonville.

The dead body management teams — that's what they call them — went out there last week to bury these bodies. Basically, the site is a swamp. They had a big backhoe to start digging the graves. But people from the [nearest] community came — they didn't want the bodies buried there. There was a clash. Then the backhoe got stuck in the mud.

They didn't finish burying the bodies that night, but they threw the bodies into the graves they'd dug. Overnight, water from the swamp came up and lifted the body bags up, and so the body bags were floating in these graves. And the community was furious.

I went out to the site — it took two hours driving from the capital Monrovia over some of the worst roads I have ever been over, just up-and-down rutted roads.

What was the burial site like when you visited?

The backhoe is still stuck, the treads just buried in the mud.

And there are all of these grave markers with people's names written on them, maybe with a Sharpie — their name, the day they died, their age: Age 60, died 28-7-2014, Lusu Fayiah.

The markers are made out of plywood and nailed onto wooden sticks. They're just scattered all over the place. I counted 37 of them.

Do the bodies pose any health risk?

Right after death is when they're incredibly contagious. People are terrified of dead bodies. But [the authorities] spray the entire body with a 0.5 percent chlorine solution, which is very strong, zip it up in a body bag, spray the body bag with that solution, then they double bag it, zip the whole thing up again and spray it down again. So it's pretty safe.

Despite the precautions, are people still nervous about the bodies?

People are just freaked out.

People were particularly freaked out because the burial turned into this fiasco where the body bags were thrown into open graves that then filled with water, so the body bags floated to the surface. That was definitely a fiasco.

They did finish filling in the graves the next day, but it was not good in terms of trying to get this community to allow burials out there, and now this burial site has been completely abandoned.

Neighbors around this site stated to me that they're afraid that those bodies are bringing Ebola to their land. That's their perspective. Whether it's true or not, that's how they feel about it.

Is cremation also being considered? Are people nervous about that as well?

The burning of bodies is so new that I've heard no complaints about it. I haven't heard anybody being concerned.

This has been such a tragic conversation. On the flip side, I wonder: Do people in Liberia ever joke about Ebola, is there any dark humor? Or is it too awful to joke about?

People have a sense of humor about it. My driver today was recounting this story he heard — a guy in a shop took tomatoes and smeared them so the juice was coming out of his ears and nose, and he ran up to the cash register and was like, "I'm bleeding." Then the cashier ran away, and the man stole all the money out of the till.

My driver thought that was really funny.