Accessibility links
The Ice Bucket Challenge And Other Good Causes: Do Stars Really Help? : Goats and Soda When actor Tom Hiddleston and Lady Gaga take the Ice Bucket Challenge, it makes a big splash. But do stars really make a difference in fund-raising and public awareness when they endorse a charity? 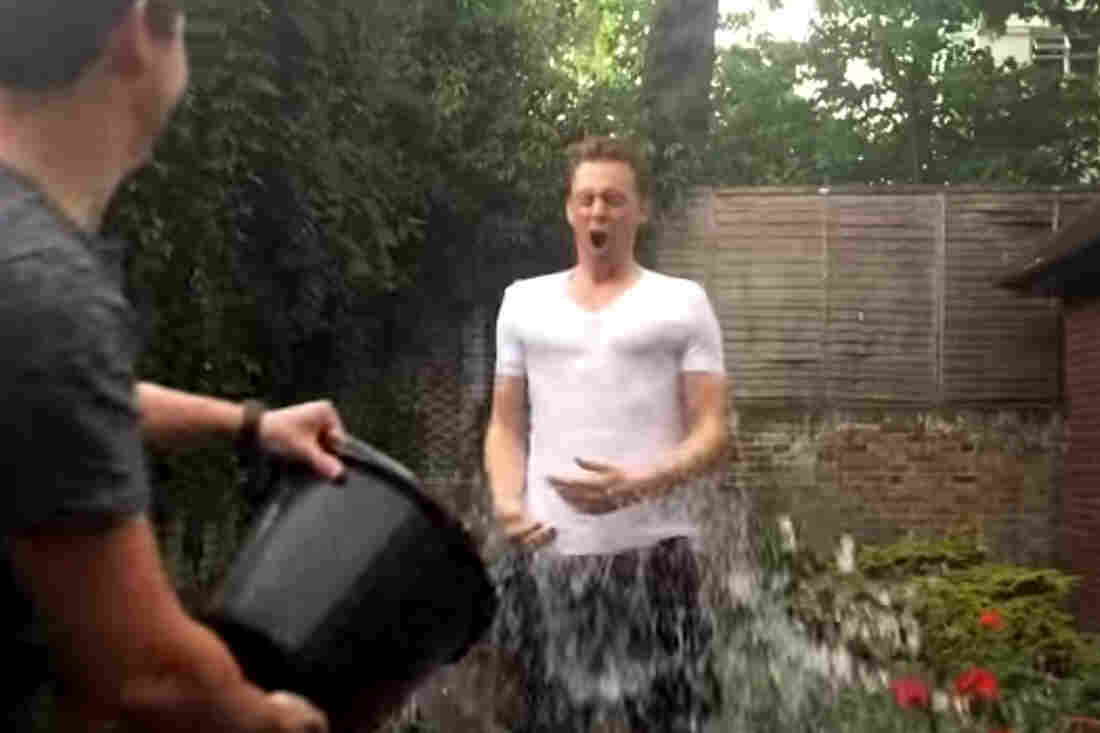 Tom Hiddleston takes the Ice Bucket Challenge. The actor is one of many stars taking part in the campaign to raise money for ALS. via YouTube hide caption 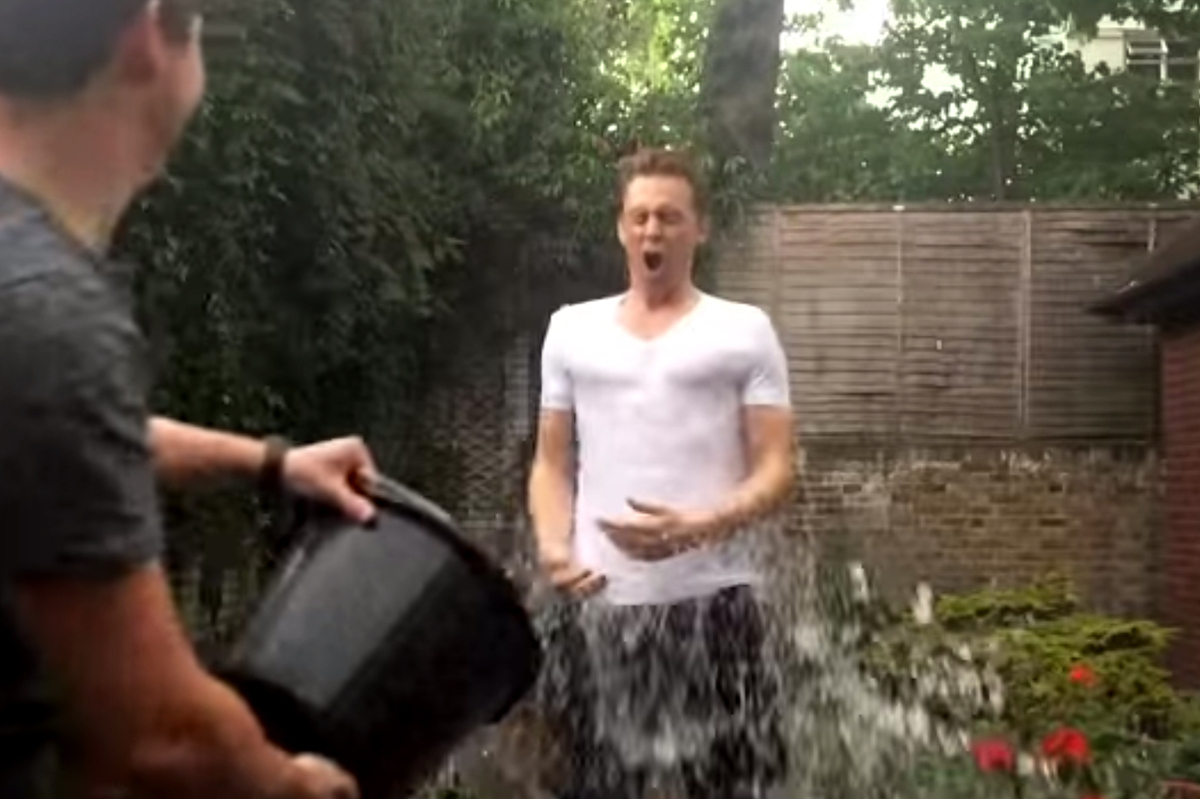 Tom Hiddleston takes the Ice Bucket Challenge. The actor is one of many stars taking part in the campaign to raise money for ALS.

It's been the social media hit of the summer — some of the world's biggest celebrities dousing themselves with buckets of ice water to raise money for ALS (amyotrophic lateral sclerosis), better known as Lou Gehrig's Disease.

Just about everybody who is anybody seems to have done the Ice Bucket Challenge, from Bill Gates to Lady Gaga to LeBron James, who's challenged President Obama to step up. The idea is that the challenged individual either has to donate $100 to the cause or be doused with ice water. Good sports do both – then pass on the challenge to someone else.

Between the A-listers and the millions of lesser-known mortals who have joined in, the Ice Bucket Challenge has raised an estimated $15 million to fight the debilitating disease in just a few short weeks. 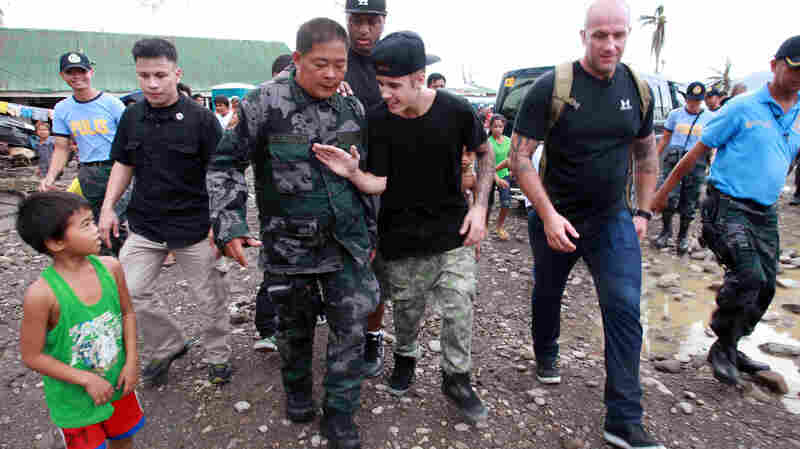 Justin Bieber may have a bad boy side, but the angelic Bieber launched a campaign to raise money for victims of Typhoon Haiyan, which struck the Philippines last year. Here, he visits a Filipino elementary school. And he took the Ice Bucket Challenge — twice. And urged Beliebers to do the same. Jeoffrey Maitem/Getty Images hide caption 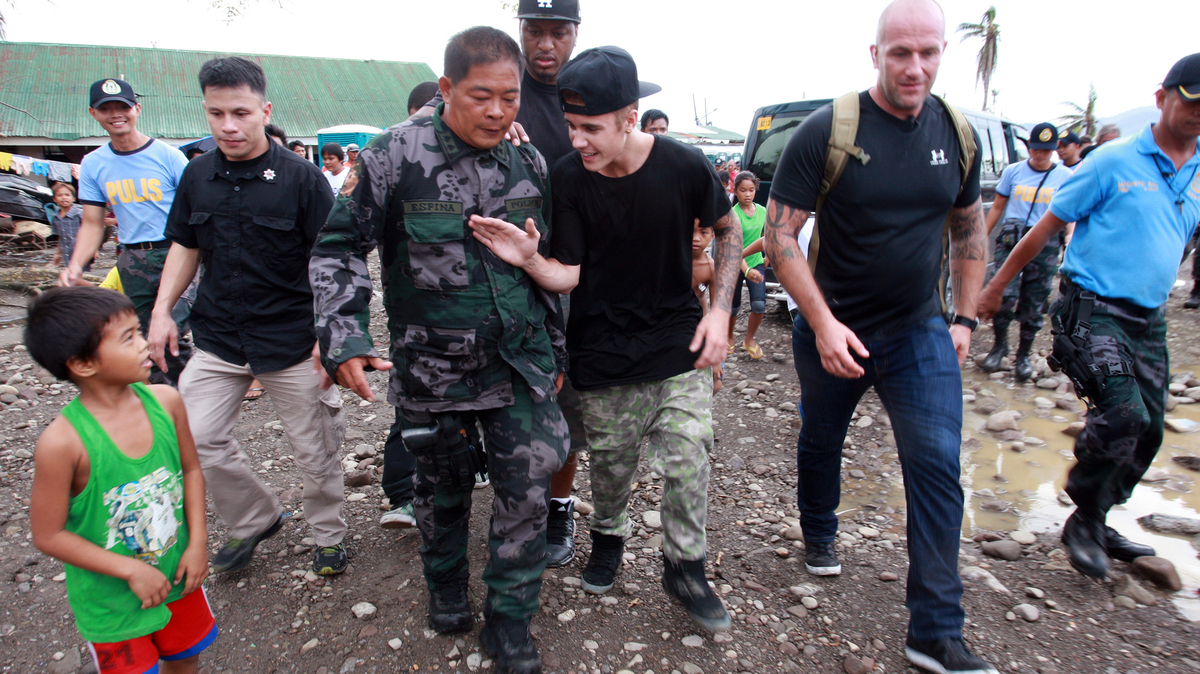 Justin Bieber may have a bad boy side, but the angelic Bieber launched a campaign to raise money for victims of Typhoon Haiyan, which struck the Philippines last year. Here, he visits a Filipino elementary school. And he took the Ice Bucket Challenge — twice. And urged Beliebers to do the same.

That's impressive, but it's just a drop in the bucket — so to speak — of the $300 billion or so raised for charities and aid organizations in the U.S. alone each year. And in the fund-raising appeals, celebrities readily lend their names to a raft of causes, from combating cancer to removing land mines.

But how much influence do celebrities really have when it comes to convincing us to support a charity? While celebrity endorsements in the commercial world are clearly seen as good value (why else would companies pay millions), studies on the impact of celebrity spokespeople for charities give conflicting results.

The principles behind celebrity endorsements are much the same, whether you're selling running shoes or compassion, says Julie Ruth, associate professor of marketing at Rutgers University Business School and an expert in brands and consumer behavior.

"People who are less knowledgeable about a product or an issue are more likely to take their cues from a celebrity endorsement," she says. "So if I don't know much about land mines, say, but I see that Angelina Jolie is involved that might draw my attention. If I think Angelina Jolie is good, cares, spends time and effort in finding out what's important, or if I just plain like her, then I might rely on that in judging whether the charity is worthy of my consideration."

On the other hand, a study released last week by British academics appears to throw cold water on the idea that celebrity endorsements make much difference when it comes promoting causes and raising funds. 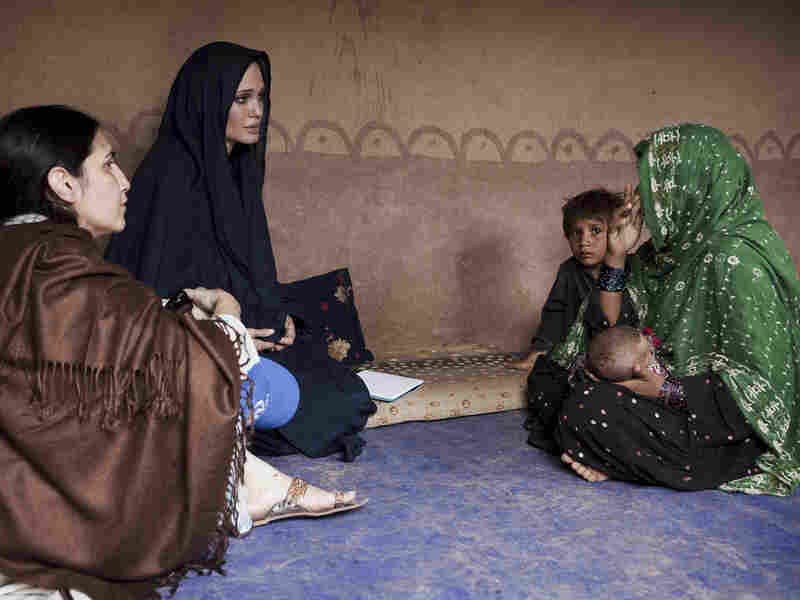 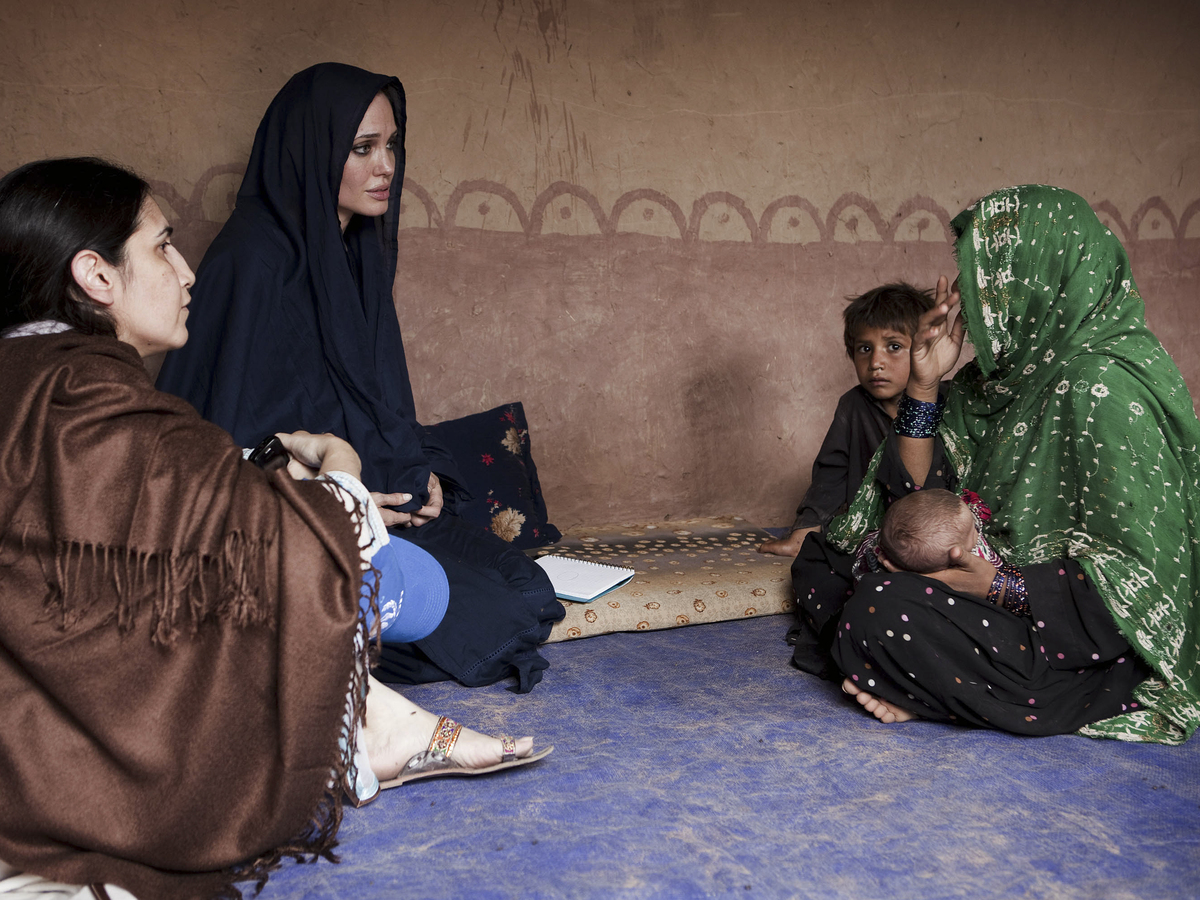 Household names don't seem to register with the public in the field of charity and distant suffering. In two surveys, each involving over 1,000 people, Professor Dan Brockington of the University of Manchester and his coauthor displayed a list of seven internationally known charities and aid organizations and asked respondents if they could link any celebrity to the groups. Two-thirds of those surveyed could not.

"Our survey found that while awareness of major NGOs [non-governmental organization] brands was high, awareness of celebrity advocates for those brands was low," they wrote in an article published online in the International Journal of Cultural Studies. "Instead it was plain from the focus groups that most people supported the charities that they supported because of personal connections in their lives and families which made these causes important, not because of the celebrities."

Another study, by Professor Martin Scott of the University of East Anglia, which was published in the same journal, found that among a focus group of 108 people who had been asked to keep diaries about their thoughts on poorer countries, only six percent of their entries mentioned celebrity humanitarianism. Nearly all of those mentions were in the context of an upcoming national charity telethon that had been given wide publicity during the period of the study.

"Overall the results of this research suggests that celebrities are generally ineffective in cultivating a cosmopolitan engagement with distant suffering," he wrote. Indeed, the British researchers found that it was the celebrities themselves that tended to benefit most from the exposure, in terms of improved public perception and positive images, regardless of their own in doing the charitable work.

A Rutgers School of Business study published last year, however, suggests it might just be the British research that's all wet — or at least bit damp.

Recall tests may not be the best way to gauge the effectiveness of celebrity involvement with a charity, says Ruth, who coauthored the study with associate professor of accounting Erica Harris, also of Rutgers School of Business. "People oftentimes cannot recall ads or they cannot connect an ad with the brand. Marketing communications can still have an impact even if people cannot recall certain elements of them. Honestly, I think I would have been surprised if surveyed respondents would have been able to link specific celebrities with charities."

The Rutgers study, which relied on statistical analysis of the fund-raising campaigns of 500 charities and aid organizations, found a definite, quantifiable and statistically significant upward blip in the efforts of charities who used celebrity endorsements as opposed to those that did not.

Those with celebrity spokespeople enjoyed an average 1.4 percent improvement in donations over those without celebrity affiliation, and were also able to reduce their overheads and promotional costs by 1.9 percent thanks to the free publicity generated by linking a famous name with the cause.

Although the quantifiable boost in donations was smaller than the researchers had expected, it was nevertheless significant, representing an average of $100,000.

Less readily quantifiable, but still important, is the enhanced public perception a celebrity can give a charity. "A brand that is able to break through the clutter of marketing messages by being associated with a well-known, attractive expert endorser is typically perceived to be more credible and more likable," says Ruth. "Both of those aspects — credibility and likeability — add value to a brand.

The fame that a celebrity brings to the table allows organizations to cut promotional costs and dedicate more of their resources to their core activity something that in turn has a positive impact on public perception and their willingness to donate.

Intriguingly, the Rutgers study showed that the presence of A-list celebrities in a campaign as opposed to regular run-of-the-mill celebrities made little difference in attracting donations. Using an A-lister pushed the 1.4 percent average donation boost to 1.5 percent, suggesting that charities can get more bang-for-the-buck with lesser known stars.

As for the charities themselves, they seem quite happy to continue using celebrities and quite content with their success rates. "Celebrities have a unique ability to reach millions of people, many of whom may not normally be engaged on the suffering of the world's children," Jane Cooper, UNICEF's director of communications in the UK, said in a statement released by the charity.

"Following Tom Hiddleston's engagement with UNICEF UK, for example, a group of his fans calling themselves 'Hiddlestoners Have Heart' spontaneously set up their own online donation page and raised more than £30,000 for our work."

As for the Ice Bucket Challenge, the ALS Association has reportedly seen donations surge by more than 750 percent compared to the same three weeks in 2013. Celebrities surely deserve some of the credit.

And the challenge has been good for the celebrities too. "Just when we thought it wasn't possible to love Tom Hiddleston any more than we already do," wrote a journalist in London's Metro newspaper, "he's gone and surpassed himself with the ALS Ice Bucket Challenge."