Accessibility links
Why Ebola Is Making It Harder To Provide Good Health Care : Goats and Soda People are afraid to go to the doctor. Clinics have lost staff to the virus. Basic supplies aren't there. Ebola will have an impact on everything from malaria treatment to maternal health. 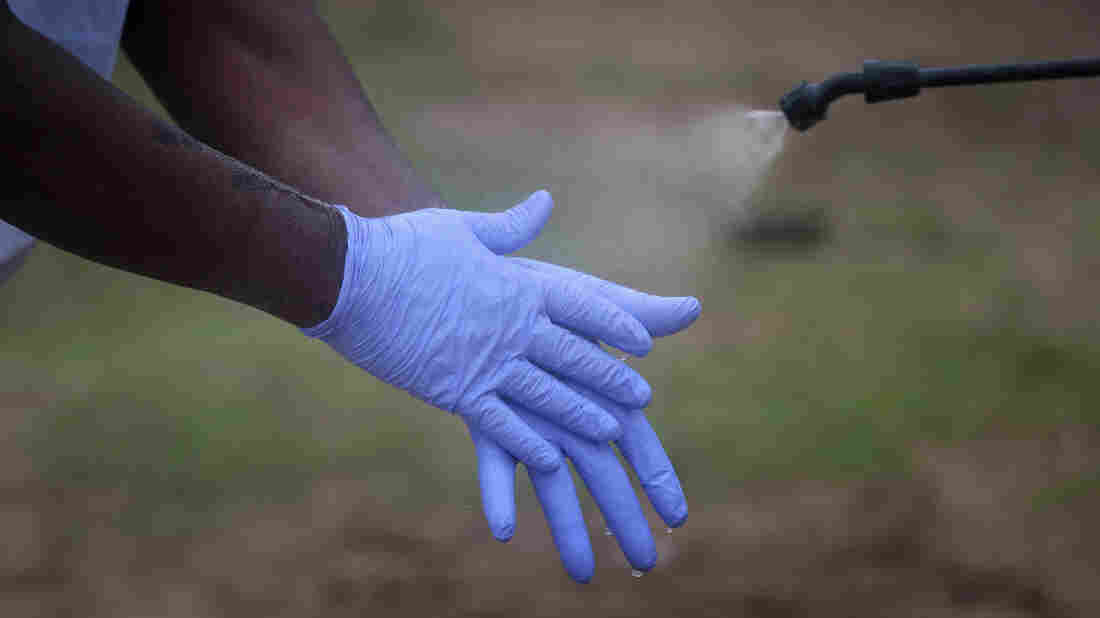 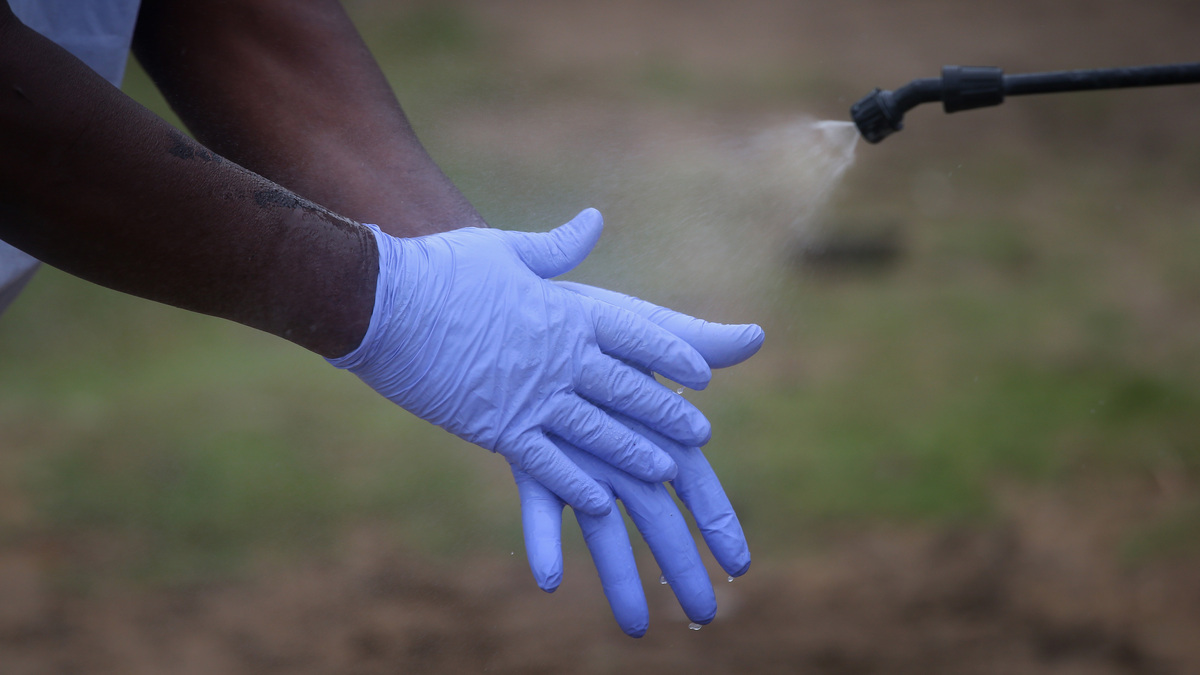 Protective equipment is in short supply. Here, a Liberian burial team carefully disinfects its gloves before disposing of them.

The Ebola virus has killed more than 1,300 people in West Africa, but the indirect deaths caused by this epidemic are likely to be far worse. Right now, it's the rainy season. And that means it's high season for malaria.

"Probably 85 percent of the fevers right now are malaria," says Laura Miller, health coordinator in Sierra Leone for the International Rescue Committee. "But more of those cases will go untreated than usual."

That's partly because some health clinics have closed as a result of Ebola — out of panic, or because the virus has taken a toll on staff — and partly because families are afraid to come to clinics because they think they might catch Ebola there.

But it's also partly because community health workers — who are trained to help identify children in need of care for malaria, diarrhea and pneumonia — are being told to back off.

Miller says the Health Ministry understandably doesn't want these workers to draw blood to diagnose malaria, as blood is one of the ways Ebola can be contracted. Yet the ministry continues to insist that malaria only be treated after one of these confirmatory blood tests. So children are going untreated for this disease, which is a leading cause of death. And malaria is just one concern.

"Sierra Leone is one of the most dangerous places in the world to give birth and to be born," Miller says. Nearly 20 percent of children die before they reach the age of 5 — there were 39,000 deaths in 2012 alone. So Ebola, while very scary, is far down on the list when it comes to a cause of death.

One woman in 23 dies from complications of childbirth, according to UNICEF, and that risk appears to be growing as well. That's in part because early on, health care workers were unknowingly being exposed to women and children sick with Ebola. Many midwives have died as a result, leaving understaffed medical services in even worse shape.

"I think in the end, most of those people [who die as a result of the Ebola outbreak] will be women and children," Miller says. "And most of the children will die from just malaria, pneumonia and diarrhea."

The situation in Sierra Leone has never been very good, and rebuilding the health system in this nation over the decade following the nation's civil war has been a struggle.

"If you were here before the Ebola outbreak, it would not be uncommon at all to walk into a rural clinic and there would be no gloves," says Dr. Joseph Fair, who has been working there as a government adviser to help the country improve its response to infectious diseases.

He's been trying to ramp up an emergency supply system to expedite those shipments, but it's actually getting harder, not easier.

The World Health Organization is pleading with airlines and shipping companies not to overreact to the epidemic by shutting down commerce with West Africa.

This isn't simply a health disaster — the disease is a deep threat to these poor and fragile nations, says Dr. David Nabarro, who is leading the United Nations response to Ebola.

"One of the things that we do need to do is ensure that services get back up and running as quickly as possible, so people can access what they need in terms of health care, in terms of food and water and sanitation," Nabarro said at a news conference earlier this week.

Without that, he said, the security of these nations could be at risk.