Accessibility links
Homer Simpson's Visit To Bangalore Makes Us Go 'D'Oh!' : Goats and Soda The Simpsons goes to Bangalore at 4 a.m. ET Friday, as part of the marathon on FXX. Clearly, the writers did not visit this high-tech-loving Indian city. 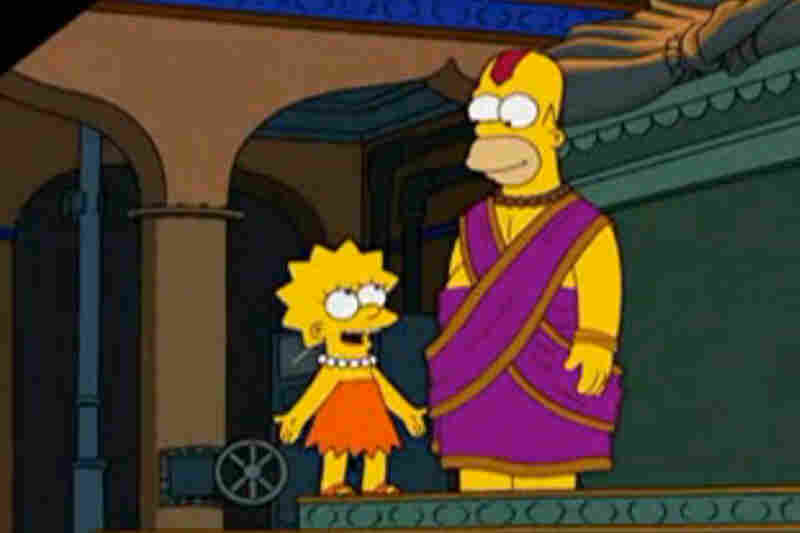 Homer thinks he is a god in the episode of The Simpsons set in Bangalore. via metatube hide caption 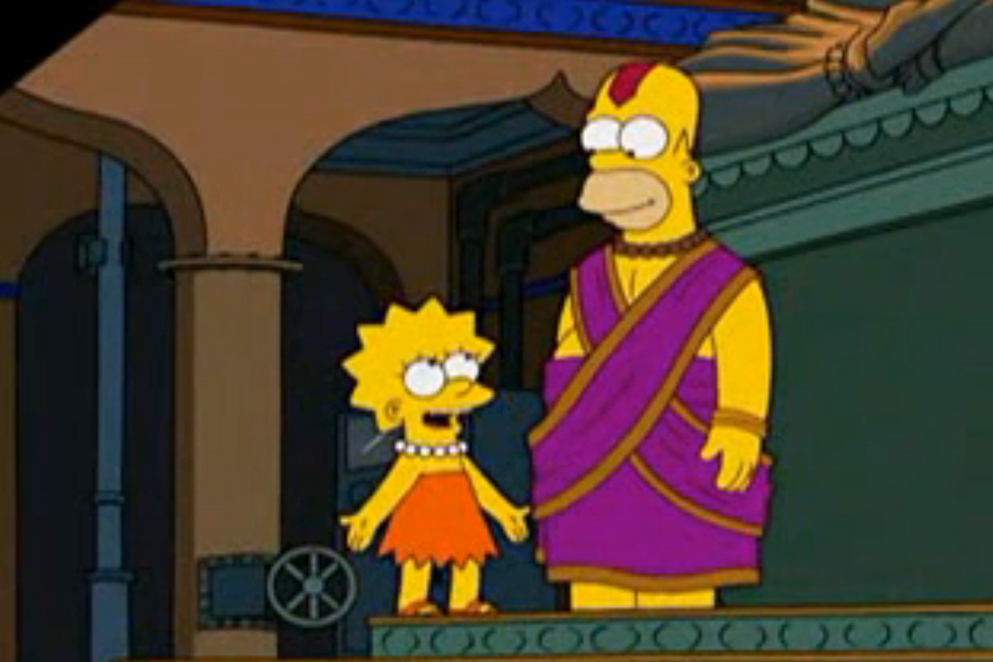 Homer thinks he is a god in the episode of The Simpsons set in Bangalore.

Some of us here at Goats and Soda were pretty excited when the cable channel FXX said it was going to run every Simpsons episode ever, 24/7 for 12 days. We are a global blog, and The Simpsons is a global show, airing in at least nine other countries.

What really caught our eye was an episode scheduled to air tomorrow at 4 a.m. ET, in which the Simpsons visit Bangalore, India.

The episode, called "Kiss Kiss Bang Banglore," premiered in 2006. Homer's nuclear plant is outsourced to Bangalore, India, and he heads over to train the new employees. What follows is a mishmash of just about every stereotype about India.

Homer lands in a place that looks like something out of the Arabian Nights, bumps into a sacred cow that eats his iPhone and meets hordes of Indians speaking with exaggerated accents. He even comes to think he's a Hindu god and inspires his employees to pray to him.

In the end, we learn that the Indian workers were only pretending to worship him because he promised them benefits like paid vacations, the right to unionize and Mylar balloons on their birthdays. His daughter Lisa says she's proud of Homer for "outsourcing the American worker's sense of entitlement and privilege."

Of course, The Simpsons isn't known for its nuanced treatment of racial and cultural issues. Many South Asians, including comedian and self-professed Simpsons lover Hari Kondabolu, bristle at the show's portrayal of Apu Nahasapeemapetilon, an illegal immigrant from India.

The show's portrait of India is so off-base that it's almost funny — but not quite. Such depictions feed into the idea that the developing countries are exotic and backward.

I grew up in Mumbai, and much of my family is from Bangalore. So I just wanted to set a few things straight:

Bangalore is a big city.

It has lots of tall buildings and zero nuclear plants. It's considered the capital of India's booming IT industry and is home to hundreds of international and domestic tech companies.

Indians have vacations and unions, and even Mylar balloons.

Actually, India may have a very slight edge over America when it comes to paid vacation. Indians generally get about 28 days off a year, whereas Americans generally get 25 days off, according to a survey by Mercer, a human resources consulting firm.

Also, everyone loves Mylar balloons. We don't need a survey to prove that.

Monkeys don't fight elephants on the streets of Bangalore.

For the record, elephants don't really roam the streets of Bangalore. That would be a major traffic hazard, and the streets are dangerous enough as it is.

You may run into a stray monkey or two, though, and they might steal your lunch. D'oh!