Accessibility links
Calm After Ebola Storm: Quarantined Neighborhood Opens Up : Goats and Soda They were angry about the treatment center. They didn't all believe the virus was real. But after protests, violence and a quarantine, many residents of West Point are no longer Ebola doubters. 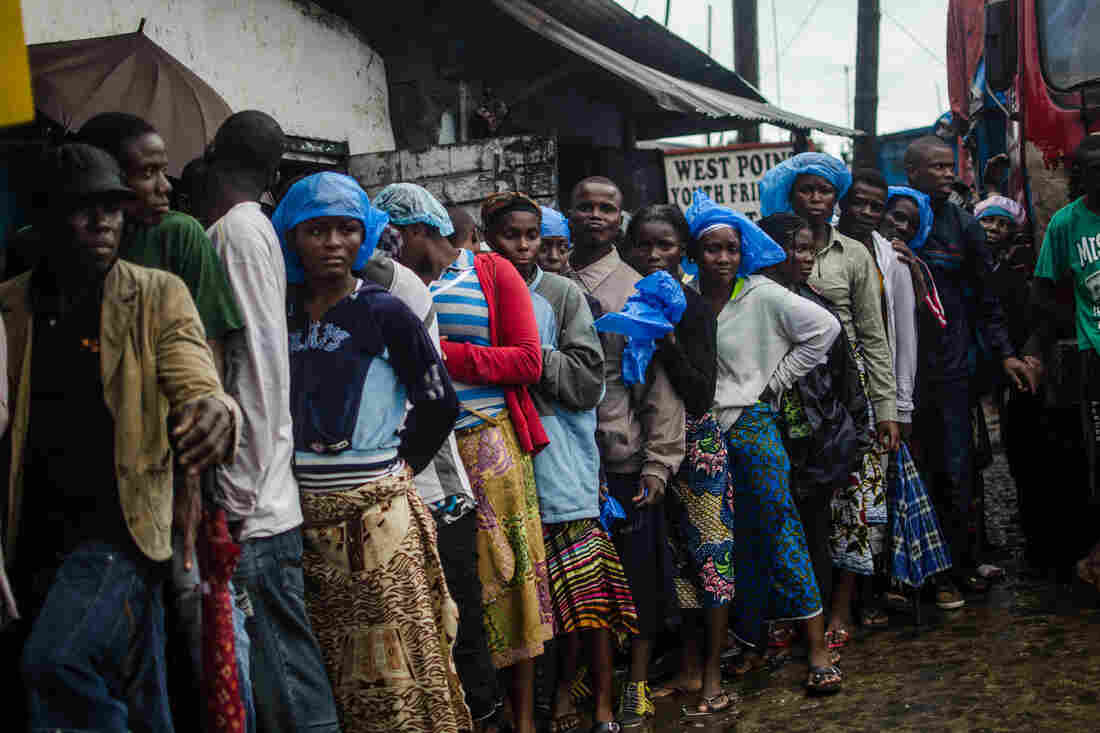 Recovering from the toll of the Ebola quarantine, residents of the West Point slum in Monrovia line up for food. Tommy Trenchard for NPR hide caption 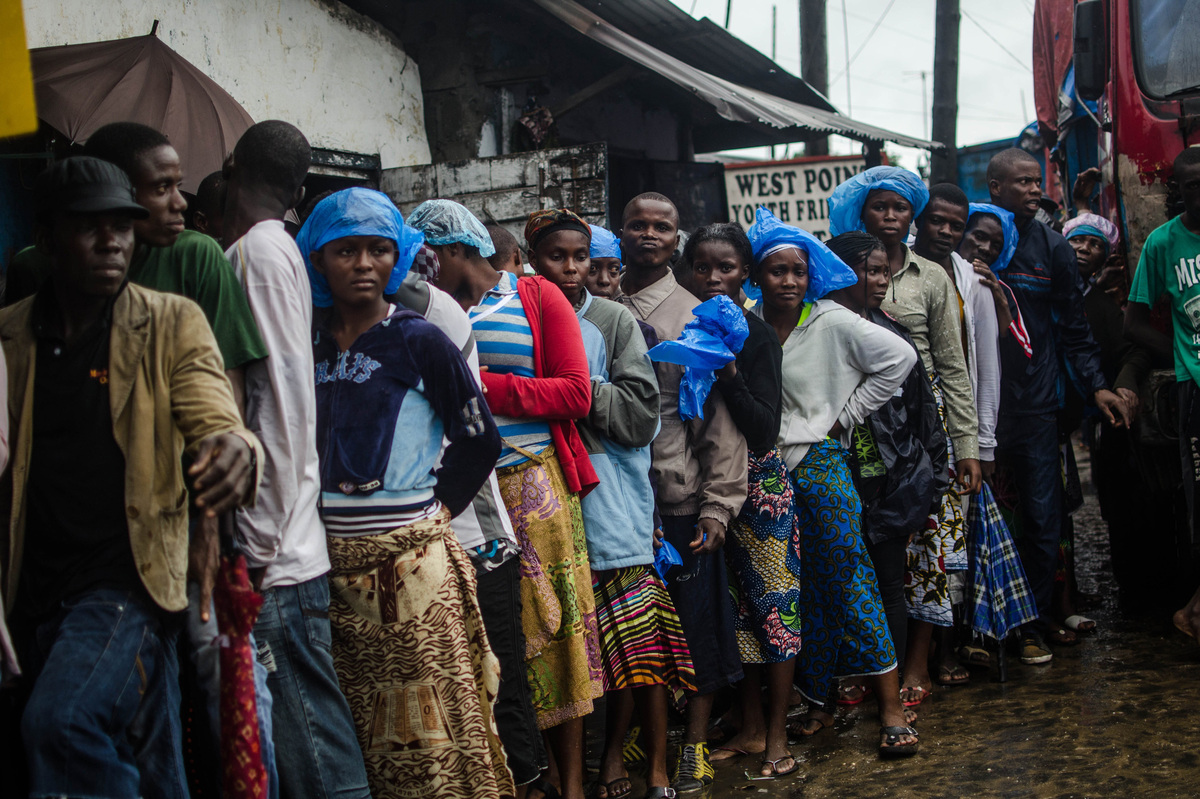 Recovering from the toll of the Ebola quarantine, residents of the West Point slum in Monrovia line up for food.

Residents in West Point are lined up, waiting impatiently for handouts of beer, parboiled rice and split peas.

The neighborhood around them is bustling with activity. Rows of tiny shacks and little shops are open for business. There's a traffic jam, as bright yellow, three-wheeled rickshaw taxis try to zoom up and down the narrow, main road.

Life Goes On, Even With The Specter Of Ebola

Despite the activity, the mood in this impoverished neighborhood, part of Liberia's capital city of Monrovia, is fairly calm — a marked contrast to the unrest of the past two weeks.

Problems began in the densely populated neighborhood of 50,000 on Aug. 16. West Pointers were angry that the government had put an Ebola holding facility for suspected cases in their neighborhood and had brought in patients from other parts of the city.

A crowd stormed the treatment center. Seventeen patients fled. Residents of West Point carried off mattresses, blankets and other items that might have been infected with the Ebola virus.

Concerned that the virus could spread through West Point and beyond, the government imposed an overnight lockdown on Aug. 20, sealing off the angry residents for a planned 21 days. That's the maximum time it can take for symptoms to appear after exposure to Ebola.

The quarantine led to protests. In one clash, security forces shot 16-year-old Shacki Kamara in the legs. He died the next day of blood loss and shock.

The quarantine ended Saturday, after just 10 days. And life is beginning to return to normal.

Some West Point residents are jubilant, saying they've won because the blockade was lifted early.

Information Minister Lewis Brown visited the neighborhood with the president during the quarantine, which he defends: "What was right was to contain that possibility of an outbreak [by setting up a blockade around West Point]."

But he believes there's been a significant change. He says that West Pointers, some of whom have denied the existence of Ebola, have come to understand the severity of the outbreak. 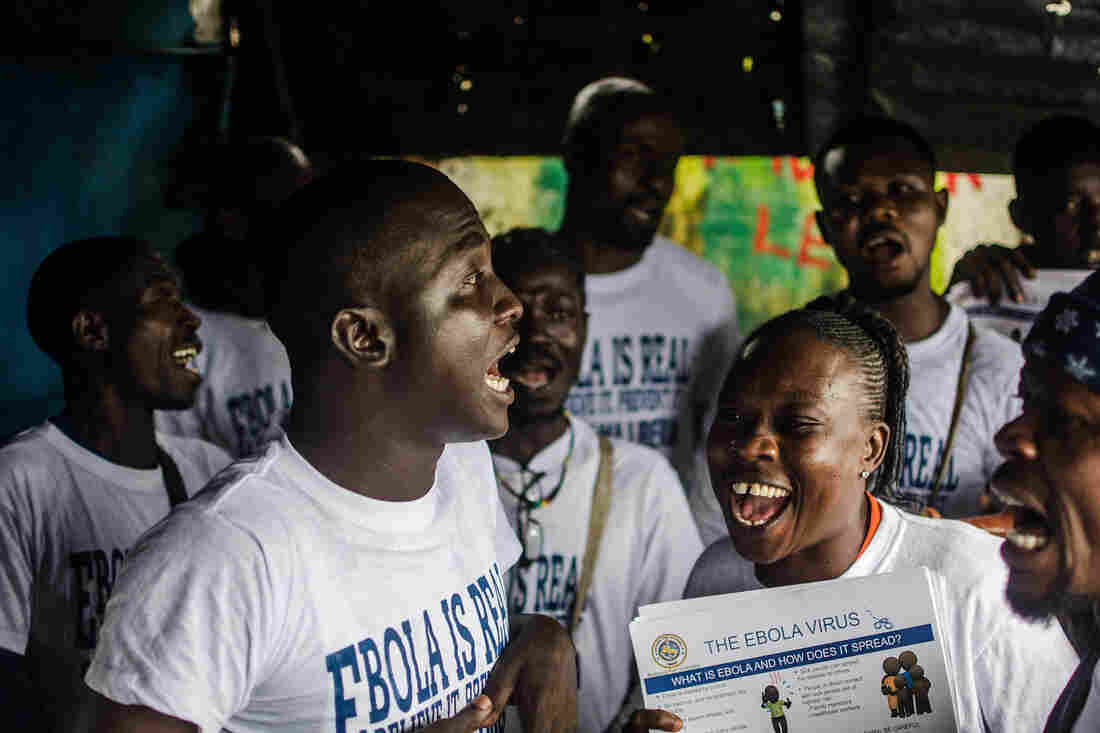 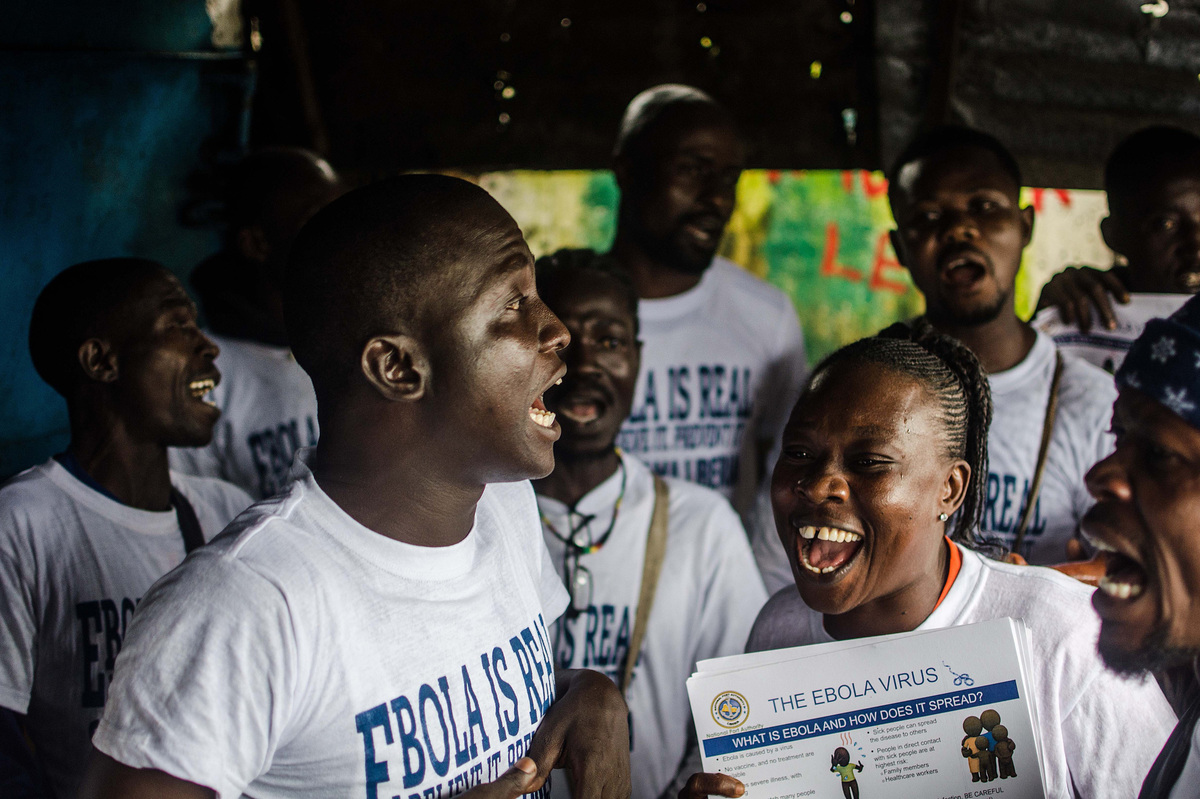 A group sings to raise awareness about Ebola in Monrovia's West Point neighborhood.

"What I saw actually impressed me," Brown said. "I saw a community now literally rallied against Ebola."

The change is evident in education and awareness campaigns in West Point. One group uses songs and T-shirts that say: "Ebola is Real, Believe it, Prevent it. Save Mama Liberia."

Although not everyone is a believer. "They say we had Ebola, but there is no Ebola," says Sarah Clark, a resident of West Point. "We are free. They lied on us." 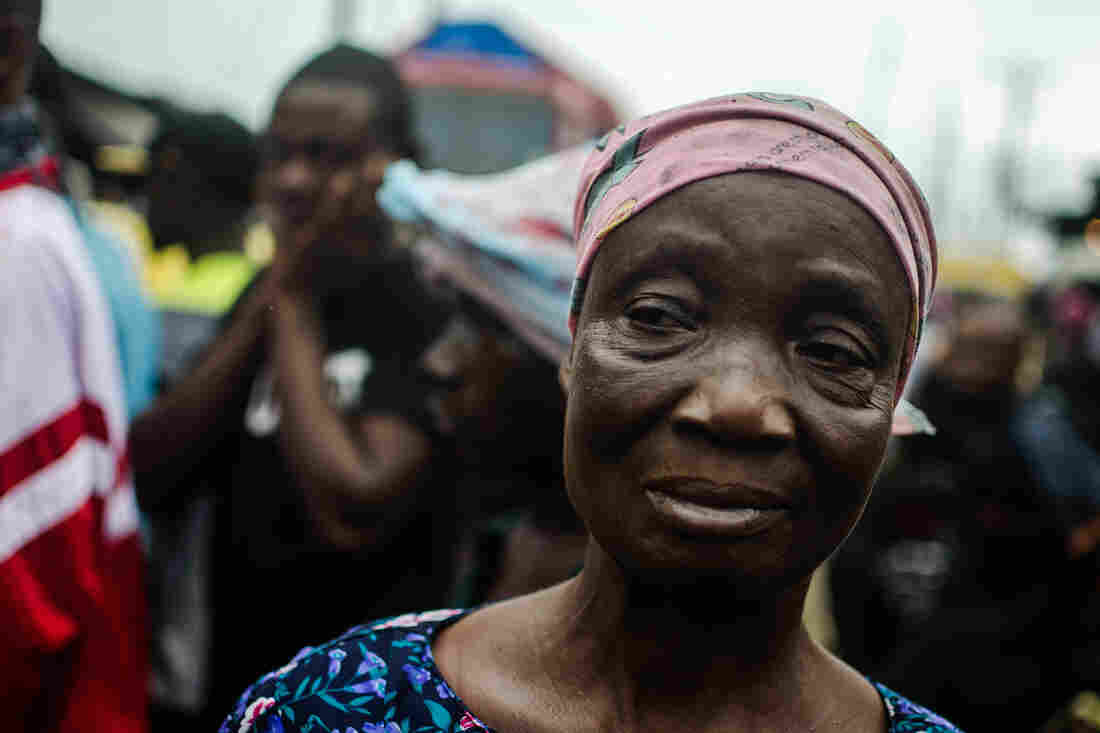 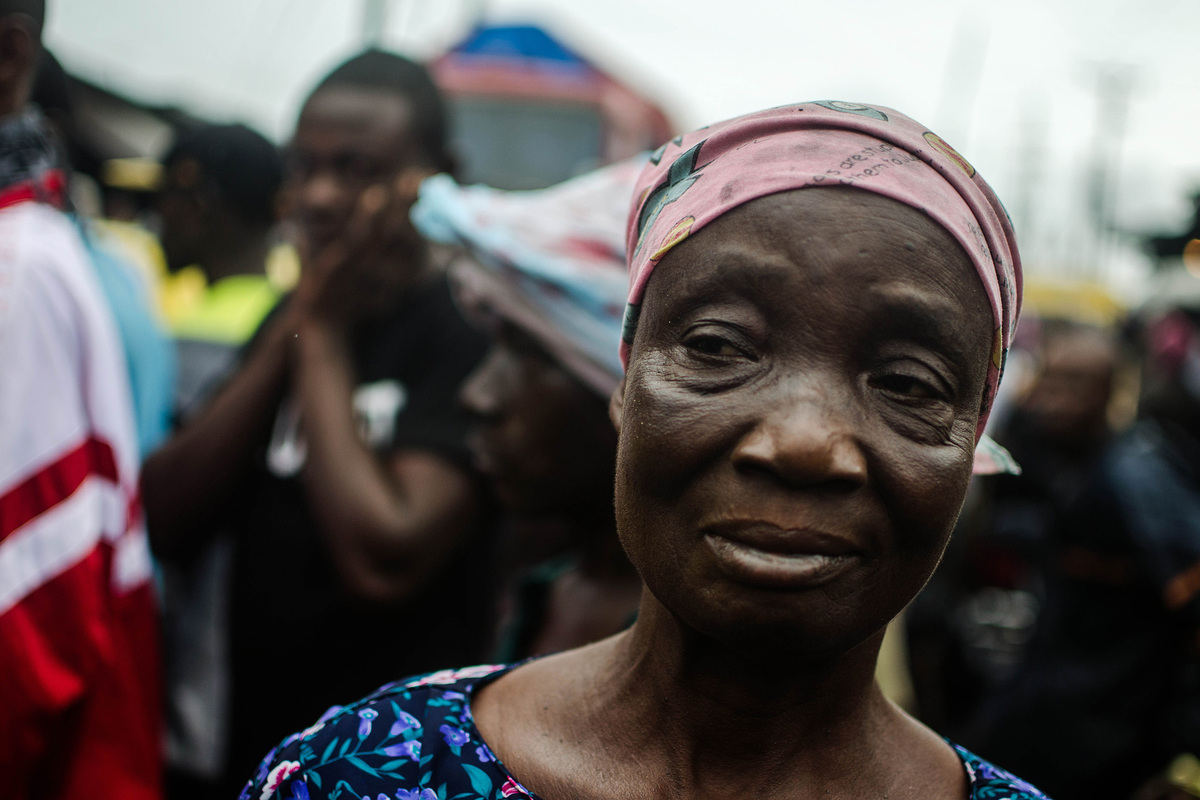 West Point resident Sarah Clark believes that the Ebola virus is a hoax.

To help the residents of this beleaguered neighborhood, the Liberian Red Cross is distributing food from 8:00 a.m. until 5:30 p.m. Supplies have come from the U.N. World Food Programme.

A heavily pregnant 18-year-old Felicia Pewee sits near the distribution point, with a pot of food cooking on the fire. She's a little tired of preparing the split peas from the food distribution, she says. So she's cooking something different.

And she's thinking about her unborn child. "I want a good future for my baby," she says.

Asked if the Ebola outbreak in Liberia puts that future in jeopardy, she says: "I was born in Liberia, and there is nowhere I can go. I know one day everything is going to be OK. And I believe that."

It's a hope she shares with her fellow Liberians.

Editor's Note: An earlier version of this post had a different spelling for the shooting victim's name and said he was 15. His family subsequently corrected the spelling and stated that he was 16.