Accessibility links
Covering Up With The Hijab May Aid Women's Body Image : Goats and Soda A few studies have found that modest clothing is connected with a healthier body image. So a British psychologist looked at whether the hijab protected women against the pressure to be thin. 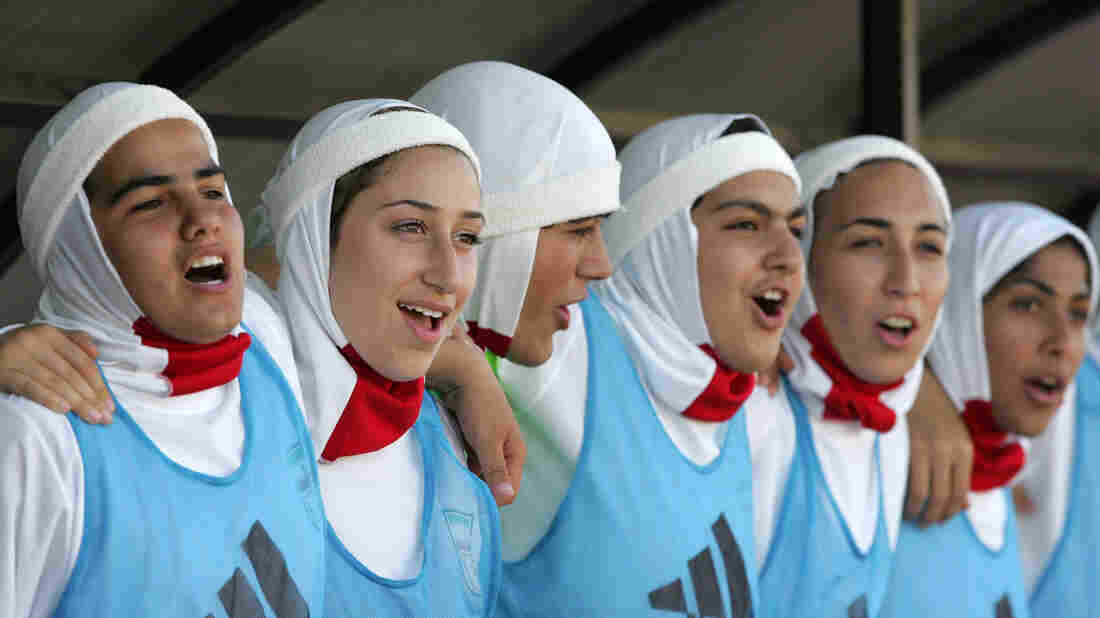 A contentious piece of clothing: Members of the Iranian women's soccer team celebrate their win over Syria back in 2007. That year, the international soccer league FIFA banned the wearing of hijabs during games. The ban was lifted in July. Mohammad Abu Ghosh/AP hide caption 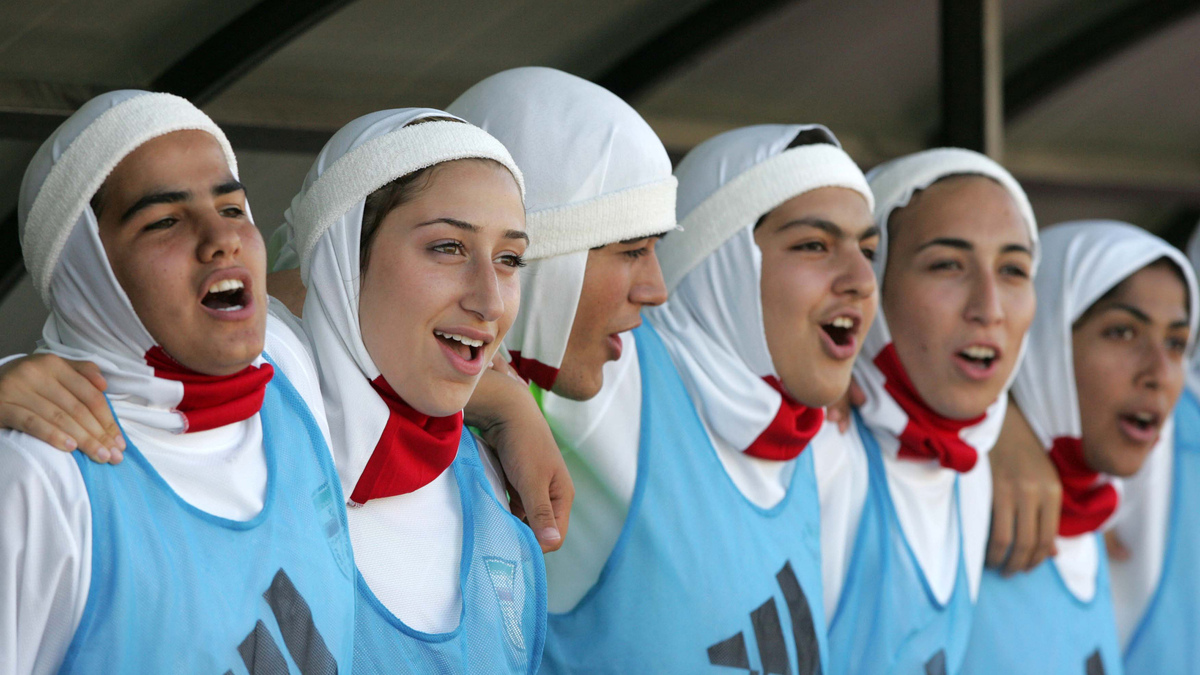 A contentious piece of clothing: Members of the Iranian women's soccer team celebrate their win over Syria back in 2007. That year, the international soccer league FIFA banned the wearing of hijabs during games. The ban was lifted in July.

Like any piece of clothing, the hijab isn't one size fits all.

Women around the world choose to wear — or not to wear — a headscarf or veil for many reasons.

Some see the hijab as a way to identify with the Muslim community or to assert themselves as a human being instead of a sexual object. Others feel the garment strips them of their individuality or turns them into a reluctant spokeswoman for the faith.

"The reasons why women wear the hijab are incredibly complex," says psychologist Viren Swami at the University of Westminster in London. "They can't be boiled down to one or two things."

Last year Swami and one of his graduate students wondered if the hijab might have a positive influence on how women view their bodies. "There had been three or four previous studies showing that more modest or conservative clothing is associated with a healthier body image," he says.

The take-home message, I think, is maybe that individuals who challenge society's norms of beauty seem to have better body images.

Psychologist Viren Swami of the University of Westminster in London

So the team surveyed nearly 600 Muslim women in Britain. About 200 said they never used the hijab. The others said they wore it at least sometimes. Swami and his colleagues also asked the women a whole slew of questions to measure how they felt about their bodies.

The difference between the two groups was small. But across all parameters, the women who wore the hijab, at least some of the time, had more positive views of their bodies on average. They had less desire to be thin. They appreciated their bodies more. And they weren't as influenced by media messages about beauty standards.

"The take-home message, I think, is maybe that individuals who challenge society's norms of beauty seem to have better body images," Swami tells NPR. "The hijab allows you to do that in a certain way [in Britain]. ... Feminism does the same thing."

The study, published in the August issue of the British Journal of Psychology, couldn't tell whether the hijab was the cause of the improved self-esteem. And previous studies had suggested that women who are more religious have better body images.

But Swami thinks the hijab could protect women against dangerous pressures to be thin.

"The hijab seems to have a buffer on body image," he says. "If somebody is objectifying a woman, the hijab might offer a sort of protection. ... Any clothing like this would help to reduce sexualization of the body."

The study looked only at women in Britain, where wearing the hijab is optional. In some Muslim countries, women are required by law to wear full burqas, covering their faces and bodies. And in others, such as France, it's illegal to wear a face-covering veil.

"It's dangerous to transpose the findings [of our study] to other places besides Britain," Swami says. The hijab's effect on the body isn't likely to be the same where women are required to wear it — or aren't allowed to wear it, he says.

Tabassum Ruby, who studies gender and women's issues at Western Michigan University, says she's not surprised the hijab is linked to a better body image.

"Wearing the hijab eliminates many of the hassles women have to go through — such as dyeing their hair," she says. "For example, you're getting old, and gray hairs, when you wear the hijab, you might not think about dyeing your hair because nobody sees it anyway."

So wearing the hijab can be very liberating for some women, she says. It allows them — and others around them — to focus on their minds, not their bodies.

"There is a stereotype that women who wear the hijab are oppressed," Ruby says, "that we [Muslim women] have no agency or power."

But all societies and cultures have their own dress code, she says. They all have a way to construct femininity and masculinity. "Muslim societies aren't exceptional in that respect," she says. "But we don't see them in that way because of the tension between the West and the Middle East."

"We don't question why woman in the West wear miniskirts and plunging necklines," she says. "So why do we question the hijab?"