Accessibility links
A Virologist Takes You Inside The Ebola Protective Suit : Goats and Soda Virus hunter Joseph Fair speaks about the needs and challenges ahead for containing the outbreak, and why he thinks things will get worse before they get better.

A Virologist Takes You Inside The Ebola Protective Suit

A Virologist Takes You Inside The Ebola Protective Suit 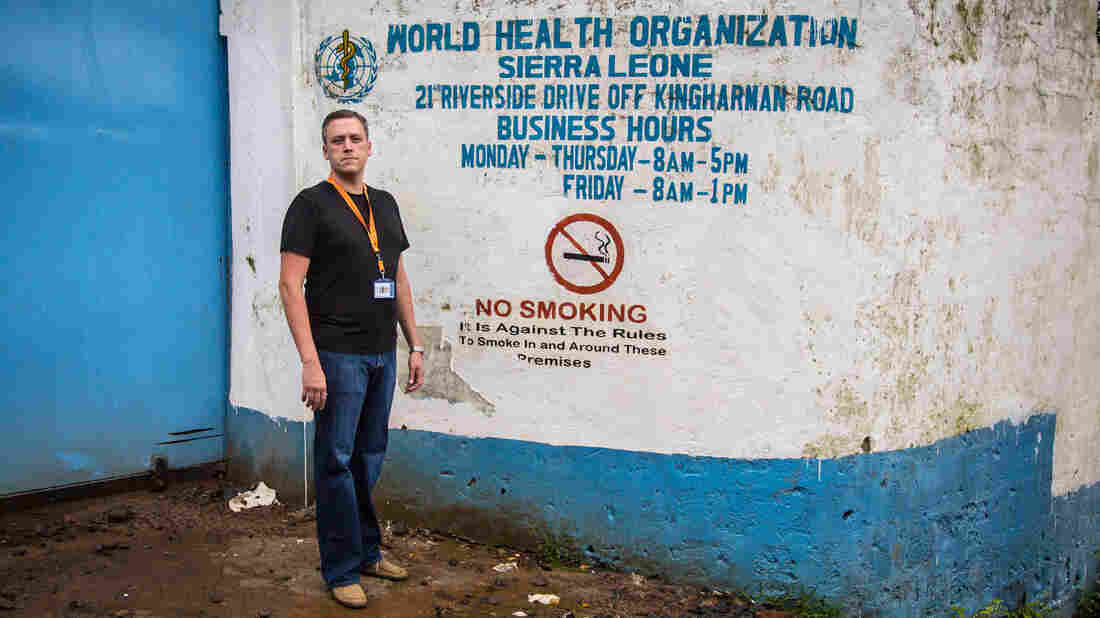 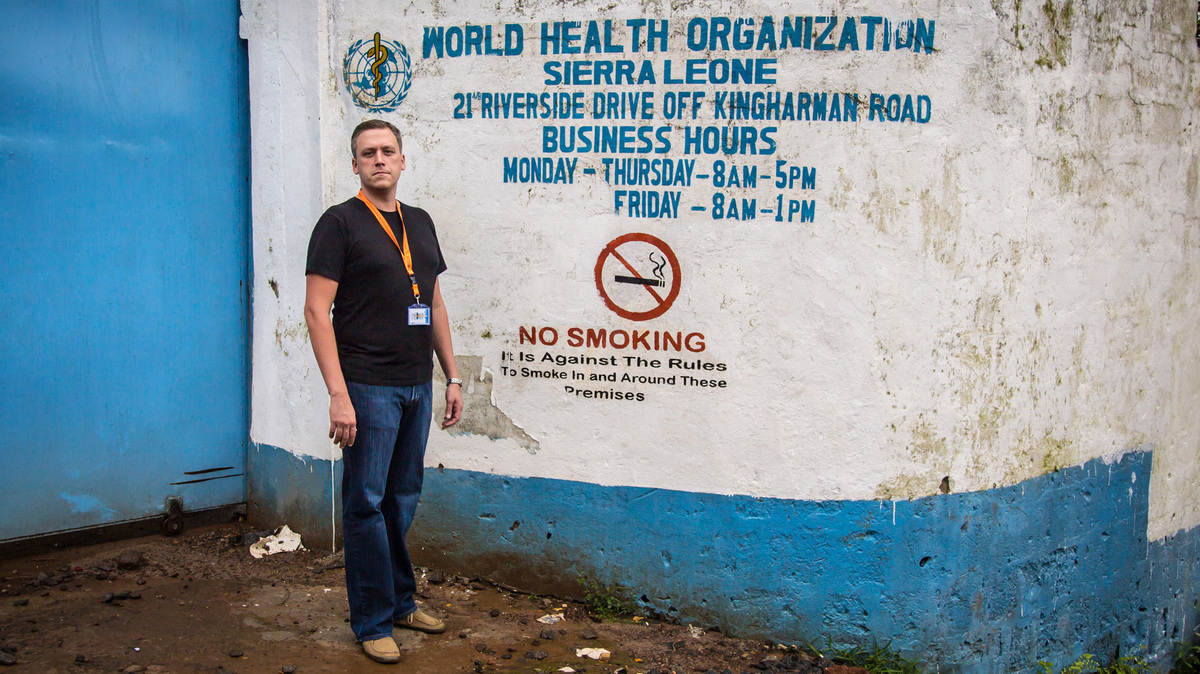 Dr. Joseph Fair, an American virologist, has worked in Sierra Leone for more than a decade.

Dr. Joseph Fair, a virologist with the Mérieux Foundation and special adviser to Sierra Leone's health ministry, has worked out of the country's Kenema Government Hospital for more than 10 years. Kenema is one of the worst-hit areas in the West African nation's Ebola outbreak; Fair lost colleagues and friends to the disease in recent months. So far, Sierra Leone has seen more than 2,400 cases of Ebola and at least 620 deaths.

During a late-September visit to Washington, D.C., to testify at a Senate Foreign Relations Committee hearing, Fair stopped by NPR headquarters to speak with reporters about the outbreak.

I mean, you can imagine working in a room where it's average 37 degrees Centigrade [98.6 degrees Fahrenheit] inside of a Tyvek suit, and if you've never worn one, it's like being in a steam room. And so wearing that in the heat and humidity of Sierra Leone, combin[ed] with a mask and boots and goggles and the gown and everything else that you're wearing, it's an exhaustive process. I mean, just the amount of sweat that you have in the suit. And then you don't have enough staff, and so really it's hard to take a break — a bathroom break, a food break, a water break. Because every time you do that, you have to completely disrobe, completely disinfect yourself, and then do the whole thing over again.

Fatigue is a big problem. And so [there might be] just a little slip-up, such as maybe having an itch on your nose and accidentally after 10 hours of work scratching your nose and moving the mask enough to where you've contaminated yourself. And being healthcare workers, again, this is why healthcare workers have such a high case fatality rate. They're exposed to a lot more virus than anyone else just because they are treating acute individuals that are highly infectious.

On controlling the outbreak

I believe the outbreak will eventually come under control. But I do believe it is going to become worse before it gets better. And I think the next three months are going to be a very trying time; we still are seeing increases in numbers. By limiting the movement of people, by limiting the ability or the opportunity to spread the infection, that's really how we're going to stop the disease transmission, it's not through treatment centers.

The first priority is for the healthy individuals not to become infected in the first place, and that requires sensitization, education, knowing what they should and should not do. And that involves just knowing some basics about disease transmission. Largely, we've made a lot of progress on that front. People know that it's real now, for the most part. People accept that it is not something introduced by their own government, not witchcraft, that it is a disease that naturally occurs.

On the challenges of diagnosing Ebola

We have a lot of complicating factors, especially with these neglected tropical diseases, because they all present very similarly in the early stages. So, really, anything could be Ebola, anything could be Lassa, anything could be malaria. And so that's why there's kind of this heightened sensitivity and fear, understandably so, when someone walks in with a fever. I mean, look at me right now; I'm sweating a little bit. And when people find out where I've been, they're like, "Why are you sweating like that?"

So you start thinking about all those things that maybe you weren't thinking about before, especially as a clinical care person or a laboratory technician. [Take the] example of analyzing a sample for malaria. If you receive a sample NOW for malaria, of course there were always safety concerns with blood-borne pathogens and you had to be careful with working with human blood. But now, knowing that it might be Ebola in that sample, there's really a heightened fear and kind of panic in dealing with those kind of samples.

On the role of home health care

There actually was a very interesting piece on CNN about a woman that had treated her family successfully and she did not have a medical background, just using garbage bags and extreme precautions in her own home. And it's our hope, it's not an ideal circumstance, but it's our hope that a lot of other locals could learn from that example because, as I mentioned, the system for clinical care is simply overwhelmed right now. And so you're also seeing a shift in our public health strategy where, like I said, it's not perfect that we would have home health care for ill individuals, but if there are no beds to put them in right now and we have no other place to put them other than maybe limited holding centers or somewhere in their community. It's our hope that people could learn from examples like that of how, yes, you may not have medical PPE, but there are ways that you can protect yourself just with some basics of avoiding blood and body fluids and other common routes of infection.

On the most pressing needs

It runs the gamut from getting vehicles on the ground to facilitate contact tracers going to see each contact every day, to the number of beds, which is something that's been very much highlighted, to the supplies of personal protective equipment. Body bags; we've run out of body bags more times than I can count, and not having a body bag leads you to not bury a patient for however long you don't have that body bag. And so nothing essentially is happening fast enough right now. And that's complicated by factors such as the commercial airlines stopping flights to the countries. We were relying on them largely for the cargo, etc. Now those problems are being addressed now with the air bridges and the proposed US response, as well as the Brits. And so I think we are going to make a turn in those kind of problems. But still every hour, every 24 hours that we wait, we exponentially increase the danger of the epidemic.

On the complicating factor of Lassa fever...

Lassa is not a respiratory virus but it does operate seasonally much like flu, so it happens in the dry seasons. The dry season started roughly two weeks ago in Sierra Leone and Liberia, and so what we'll start to see is a mounting number of cases for Lassa fever. Typically we'll see anywhere from eight to 10 cases per week in a high season for Lassa. And so that's going to greatly complicate matters when you have two hemorrhagic fevers presenting at the same time.

Being over-capacity in our beds for Ebola, we now have no place to put those individuals [with Lassa fever]. And something we definitely don't want to do is mix those patients, because with [Lassa] you actually have quite a good chance of surviving, with the other less so. So it's a very dangerous combination and something we're going to have to address very quickly, and it's going to further complicate things.

...And of other fevers

Fever is not an uncommon thing in this part of the world; I mean, malaria is hyper-endemic in the area, typhoid is hyper-endemic in the area, Shigella, hyper-endemic in the area. All of these cause the same symptoms on a normal day, right? And testing for all of those things has shut down at the moment. And so you would like to think that it's not Ebola, of course, and there's a heightened fear that it would be — and understandably so. It's much like we saw with HIV in the early days. Is it better just not to know? Would you sleep better at night if you didn't know, if you didn't have the test? So I think you're facing a lot of that, of just an innate fear of "if it's positive, what am I going to do?"

We're focusing too much on treatment centers. ... If we don't stop the transmission of the virus, we're never going to have enough beds.

I think really the three probably biggest things that worry me are that, one, we're focusing too much on treatment centers. Again, going back to kind of the transmission, if we don't stop the transmission of the virus, we're never going to have enough beds, or the population is going to be decimated; one or the other is going to happen. So the focus, in my opinion, has to be, number one, epidemiology and stopping the transmission.

The second thing for me would be now that we have had the introduction of these experimental vaccines and treatments, that has created a mindset in the local population that that's going to be the answer, that there is this cure out there, that we can save ourselves with this cure with this vaccine. The reality is there's not going to be enough of those treatments, we don't know exactly how they're going to affect a larger population once they're disseminated, and there's not enough vaccine. And by the time that we made enough, you know, it would be anywhere from six to 12 months from now to make pharmaceutical-grade experimental treatments, and largely we still don't know what's going to happen when you put those into human beings. This is kind of an ad hoc clinical trial, if you will. .... It is most certainly not the answer to stopping this current epidemic. Now that may change in the future because of what we see in this epidemic of how well they work, but it's not what is going to stop this current epidemic.

And then thirdly, and I really speak to mostly Sierra Leone and my own experience, is when looking at how did it get this out of hand, or how did it grow this much in at least that country, it's such a combination of factors that unless you've either spent time there or are very familiar with the culture and the country, you wouldn't understand how that happened. If you're looking at Sierra Leone, for example, there's essential a two-party system much like we have here in the U.S., and the areas that are the current epicenters of the virus happen to be the opposition party strongholds, especially Kenema. And so early on in the disease, there was both the kind of innate denial of the disease just because people didn't want to believe that Ebola was there, but there was also use of the disease as kind of political action saying, oh, of course, you're trying to kill us because we're the opposition party and this is your way of eliminating your competition very early on. And that was unfortunate because that really retarded a lot of the health process and led to a lot of the misinformation that came out very early on, some of which you still see even today.