Accessibility links
A Strong Voice From The Ebola Front: Lorenzo Dorr : Goats and Soda Drugs are in short supply. So is protective gear. Muddy roads may be impassable. But community health worker Lorenzo Dorr continues his efforts to keep Ebola in check in remote parts of Liberia. 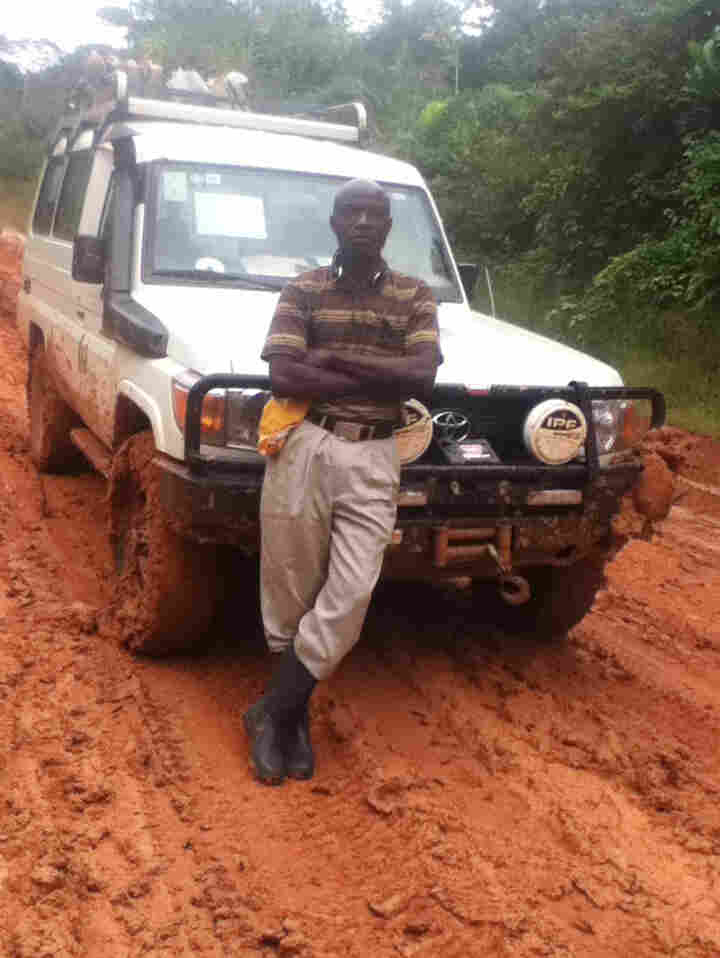 That's what Liberian health worker Lorenzo Dorr tells me. The first two cases of Ebola have been confirmed in Grand Gedeh County, in Liberia's southeast, where Dorr is based.

Dorr first spoke with Goats and Soda a few weeks ago about his work with Last Mile Health, a nonprofit in Liberia that trains and deploys health workers in remote communities. Throughout September, he's continued coordinating anti-Ebola activities and training and equipping village health workers in the southeast of the country. He spent time in Rivercess County, one of Liberia's poorest, to begin addressing that underserved area's critical health needs. When the 50-year-old father of four returned home to Grand Gedeh, he helped welcome Dr. Paul Farmer and colleagues, who'd traveled from the United States to start setting up a new and much-needed Ebola treatment center in the county's main city, Zwedru.

Until last month, Grand Gedeh had been one of the lucky few Liberian counties to remain free of Ebola. Now that it's not, Dorr's efforts have become all the more important.

The first case in Grand Gedeh Country came in late September. What was the reaction?

Everybody in town was shocked. Every time there has been a meeting and they have said Grand Gedeh is Ebola-free, people clapped their hands, and there was applause. This time people became very disappointed. I think they are very, very much disappointed. However, everyone will be doing all he or she can to ensure this will be the only case in Grand Gedeh.

The good news is that the patient became a survivor. So Grand Gedeh can now boast of a survivor. His family members will have to go 21 days in isolation.

But this week, another case has been confirmed, and the patient died.

It is more imperative now than ever before to try to strengthen awareness strategies and case identification. On the local radio at 8 a.m., after the first case of Ebola became public, the county superintendent was very angry and gave a strong warning. The confirmed Ebola case was [visiting from elsewhere] in the confines of the Zwedru Central market and was not reported by the marketers. The marketers kept silent, they didn't report it to the county health team. If it happens again in the future, he will close the market down until the Ebola epidemic is over in the country.

Do you think the message will be taken seriously?

It will be taken seriously. People should report strangers. This is not the time for people to go from one community to another. They definitely will not be welcome.

Tell me about your visit to Rivercess last month. What are the challenges there?

Even if community health volunteers are trained, since 2012 they have not received drugs. The NGO that supplied drugs closed and left. The storeroom is almost empty. [The clinics] in the county were each given five sets of personal protective equipment. One of the clinics has already used three, only two are left. There are also no pediatric drugs in the clinic I visited for HIV/AIDS clients.

We toured the hospital. It's so limited you'd think it was not a hospital. The hospital does not have bedding, there are very tight rooms, and they need expansion. These are very deplorable conditions; there is not even oxygen in the delivery room. The medical director was saying the operating theater is so hot, there is no air conditioning.

The hospital lacks gloves. They [certified midwives] recycle gloves in the delivery room, they reuse them. There is no linen, most of the beds are without water-resistant covers and are easily soiled. In some cases, there are mattresses made of mackintosh [raincoats] — so they will not be soiled. The hospital needs to have bedding. They can't just put a patient in a bed like that. You have to keep the integrity of the patient. Another major challenge is lack of training.

There are two confirmed Ebola cases reported in Rivercess. They are doing all they can. They're looking to us as a key partner in this fight and beyond.

After you returned to Zwedru, Ebola training started for county officials and health centers in Grand Gedeh County. Why was that so important?

The long-awaited training covered county officials and other stakeholders as well as health workers in the hospital, health centers and public and private clinics in the county. Training is one thing and availability of equipment is another. It is still not quite clear how much personal protective equipment has been provided and is available. Without these, the training is not useful.

The roads are especially difficult to navigate now because it's the rainy season, right?

This is the last month of the rainy season. The roads are continually bad. It's affecting everybody. Two of our staff left early one morning for Monrovia but could not make it through. It took me two days to reach Monrovia over this past weekend. We slept in our vehicle.

It takes days to transport blood samples and specimens of suspected, probable and alert cases to the testing center at Liberia Institute of Bio-medical Research in Margibi County. And it takes 72 hours for a blood specimen to remain viable for testing, and so the sample needs to arrive at the testing center before the 72 hours expire. It's a very serious situation. You can't send it under the current conditions.

The worsening road condition has also affected food supply to the counties in the southeast and availability on the markets in these areas, resulting to hacking of prices of basic goods.

There are also severe drug shortages in the counties resulting from either lack of commodities at the National Drugs Service or bad road conditions that make road transport difficult. The lack or acute shortage of essential drugs and supplies in the facilities is keeping away sick people and rendering it rather difficult for health care workers to identify cases for early intervention, which is cardinal to increase the chance of surviving Ebola.

A lot of great and good works have been done and continue to be done in the fight against the Ebola in the country. However, I strongly feel that in order to succeed in this fight, we must be holistic in our approach. A friendly environment needs to be created to allow for the sharing of information. Food needs and other basic needs of vulnerable people must be met to ensure adherence to prevention and control measures.

Roads must be improved to allow free and easy movement of people, to prevent clustering and direct contacts in case of a vehicle stuck in the mud or deep potholes and to facilitate easy referral and transfer of cases from one point to the other. Drugs and medical supplies must be readily available at all times in health facilities providing care. And the availability of testing and treatment centers within easy reach cannot be overemphasized. 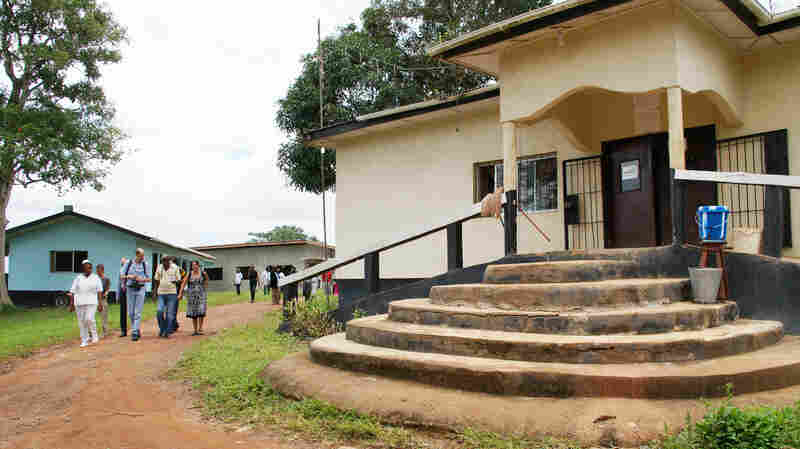 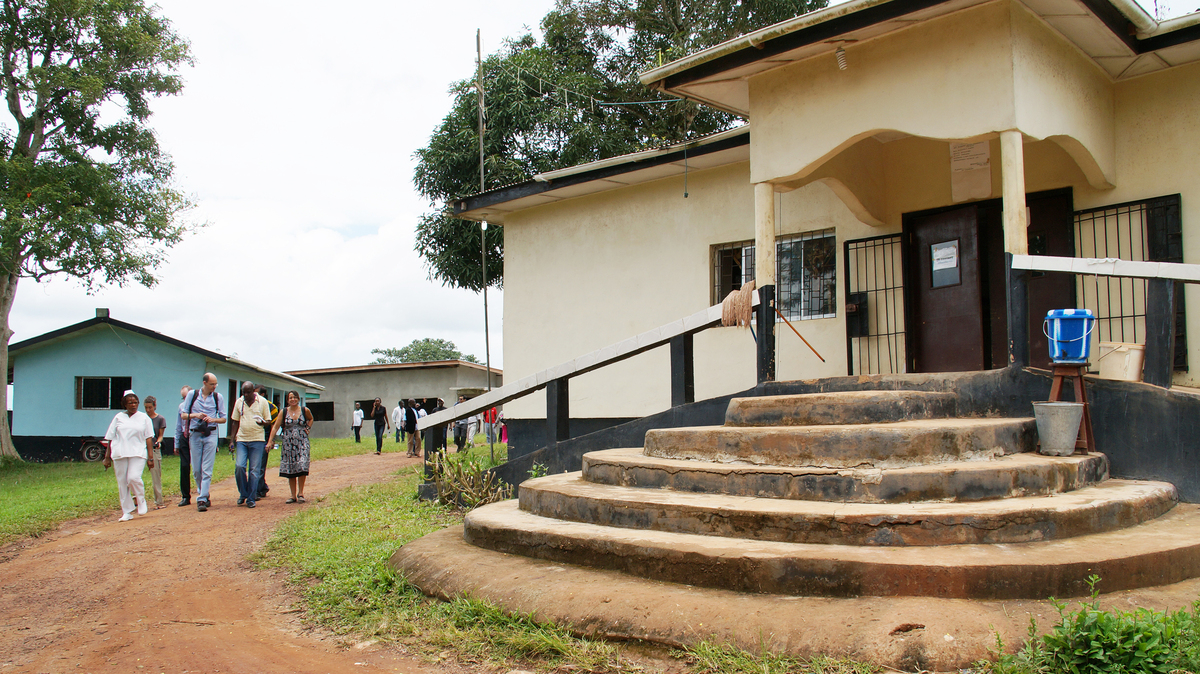 Rebecca Rollins/courtesy of Partners in Health

Dr. Paul Farmer and colleagues from Partners in Health and Last Mile Health visited Zwedru this month to start work on a new Ebola treatment center in Grand Gedeh County. Can you tell me more about that?

Dr. Farmer assured us they are standing with the citizens in the fight against Ebola. He is passionate about what the country is going through. We are very hopeful that it won't be long until he is back in the country to start work.

The scope of intervention they have in mind is very important. Currently there is no treatment or testing center in the county. The Partners in Health testing and treatment center is very welcome. We look forward to working with such an organization and seeing our dreams realized.

The United States has started sending soldiers to build 17 Ebola treatment centers in Liberia. How are people reacting to this?

Given the experiences of the Liberian people in years of crisis, people will be a little bit apprehensive. What we learned so far is the military will establish Ebola treatment units in the country and mobile testing facilities. That is good news. Everybody is happy. But people are still speculating there might be another agenda other than establishing an Ebola treatment unit.

Liberia's chief medical officer, Dr. Bernice Dahn, placed herself and her staff in isolation last week after her assistant died of Ebola. What's your reaction to this news?

I'm not really worried. I think everybody knows what to do. But it sends out a very bad message. If the staff from the ministry is infected, it quite clearly demonstrates the weakness of the system. It will make people lose confidence in the system.

You and your family lived through Liberia's terrible years of civil war. How does this time of Ebola compare to those years?

We know exactly what it means when we talk about war. In a war, one can identify one's enemies and know how to escape. One can leave and hide. But you cannot hide from this. And if you hide with people in the bushes, the people you are hiding with may be infected. In a war, you can embrace others; you can care for each other. But this [Ebola crisis] is against intimate friendship and against love. In a war situation, caring for wounded family members is not limited by conditions such as is the case with Ebola. [In wartime] I have seen family members holding their wounded relatives in their arms, soaked in blood. Even as a health care worker, I have been overwhelmed with patients, wounded from war, soaked in blood, which I must care for with little or no PPEs such as gloves and without so strong a fear of being infected as is the case with Ebola. For many people, this is more than just war.

I will tell you something. The funny part — it is sad and funny — is if you ask people now between HIV or Ebola, what do you prefer, many will say, "We prefer HIV," even though there is no cure. This is how serious things are.