Accessibility links
Ebola Volunteers Are Needed — But Signing On Isn't Easy : Goats and Soda Doctors and nurses are desperately needed to fight the Ebola outbreak in West Africa. They're finally starting to volunteer in larger numbers, but getting them deployed is a slow, complicated process. 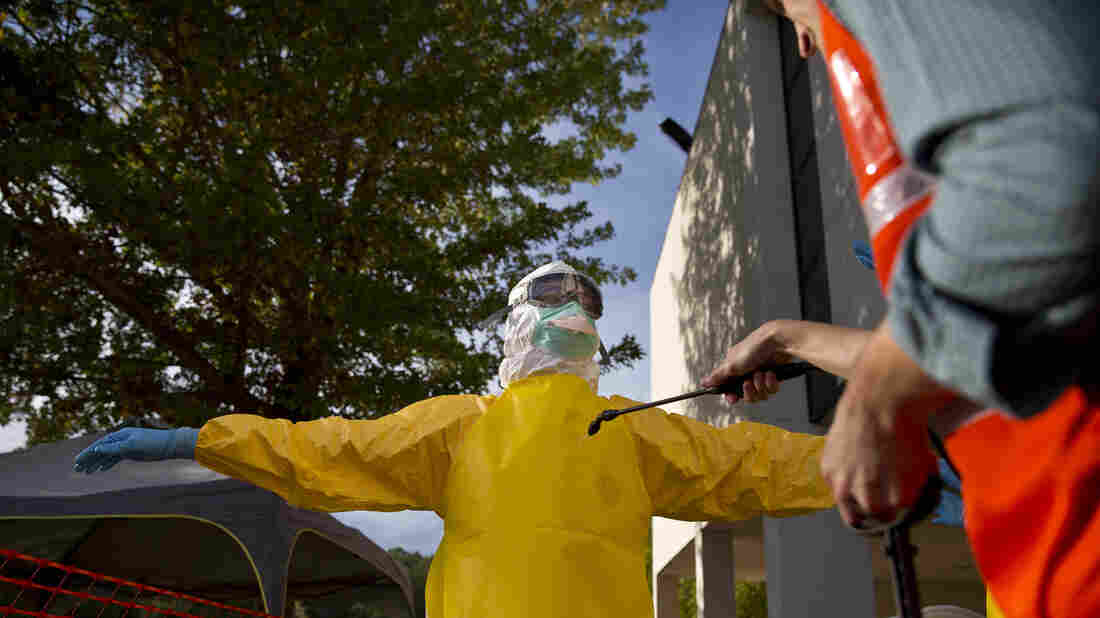 A licensed clinician is decontaminated before disrobing at the end of a simulated training session by CDC in Anniston, Ala. Training can take a several weeks, making some employers reluctant to encourage their medical workers to volunteer in the Ebola outbreak. Brynn Anderson/AP hide caption 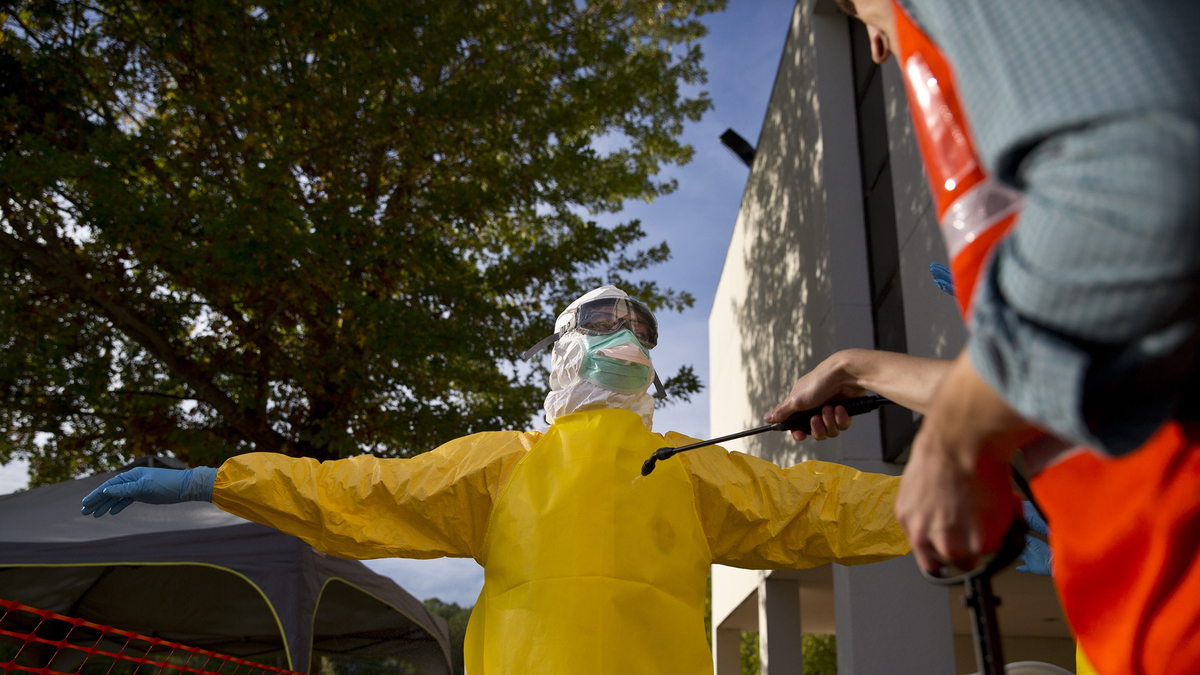 A licensed clinician is decontaminated before disrobing at the end of a simulated training session by CDC in Anniston, Ala. Training can take a several weeks, making some employers reluctant to encourage their medical workers to volunteer in the Ebola outbreak.

As soon as the Ebola outbreak started to spiral out of control in West Africa, Kwan Kew Lai felt obligated to help.

She's a physician who specializes in infectious disease. And for the last decade, she's dedicated herself to volunteering for international health emergencies. She works part-time at one of Harvard's teaching hospital just to have that flexibility.

But finding an organization to deploy her has proved challenging and time-consuming. The group she normally goes out with pulled the one doctor they already had in Liberia and shut down further operations in early July — after two American health workers from different organizations got infected. Lai's group decided they weren't equipped to treat Ebola patients.

Lai didn't give up. She figured she'd just find another organization to work with. "I just said to myself, 'I can't be sitting here at home,'" she says. "'I really need to be there.'"

So she wrote the World Health Organization. She says she got one email requesting information she'd already given them — then never heard back. She also tried USAID, the agency that's leading the U.S. government's response in West Africa. They've set up an Internet portal for medical workers who want to volunteer.

"Then every day we share the contents of the portal with about 150 non-governmental organizations that are either working in West Africa or supporting health sector work in West Africa," says Juanita Rilling, director of USAID's Center for International Disaster Information.

So far about 2,700 would-be volunteers have signed up. But Lai found that aid groups have been slow to sift through the list. She put in her application in early September. But she's only now hearing back from many groups, including a number she'd already contacted directly in the meantime.

And Lai says she thinks a lot of other volunteer hopefuls have been similarly "floundering," as she puts it.

Lai, at least, has finally found a placement. Nearly three months after she started her search, the aid group International Medical Corps, or IMC, signed her on to help run an Ebola treatment unit in a rural county of Liberia. But here, Lai ran into another issue. Whereas she was ready to leave in as soon as two weeks, IMC told her it would be more like a month and a half.

While IMC ultimately plans to operate four Ebola treatment units, it would be dangerous to ramp up the effort too fast, says Rabih Torbay, the group's senior vice president for international operations.

"We start small just to make sure that patients are coming and that we have all the protocols in place and the staff are comfortable," he says. "Then we increase the bed capacity."

He adds: "We're not starting all four [treatment units] at the same time because that would be overwhelming."

Many would-be volunteers who have full-time jobs at hospitals are facing yet another obstacle: reluctance from their employers. This includes several dozen medical workers who've told the leadership at Mass General Hospital and an affiliated hospital in Boston that they want to go.

Mass General regards that kind of service as a core part of its mission. They often give incentives for people to volunteer, including time off and some pay.

But that's not on offer this time. The hospital isn't officially encouraging its employees to go.

"It is a pressing need, there's no doubt," says Miriam Aschkenasy, deputy director of global disaster response at the hospital's Center for Global Health. "But institutionally there's a hesitation because there are a lot of considerations."

Considerations like the amount of time staffers would need to take off. For most disasters two weeks is sufficient. But to work on Ebola, staffers need two weeks just to get trained. Then four weeks to work in an Ebola treatment unit, then three weeks off work to monitor their symptoms — just in case.

Just as importantly, Aschkenasy says, hospital officials worry there's no infrastructure to take care of their staff if they get sick — with anything, not just ebola. And there's no easy way to get them to another country for treatment.

"The institution is primarily responsible for the liability of their staff," she says. "It looks really bad if your staff goes off somewhere and something really bad happens to them."

And yet, she says, she still hopes medical workers across the United States will step up.