Accessibility links
Should You Stock Up On Chocolate Bars Because Of Ebola? : Goats and Soda The virus has already caused one spike in chocolate prices, because cocoa is grown in countries that border Ebola-stricken Liberia and Guinea. Prices went back down — for the moment. 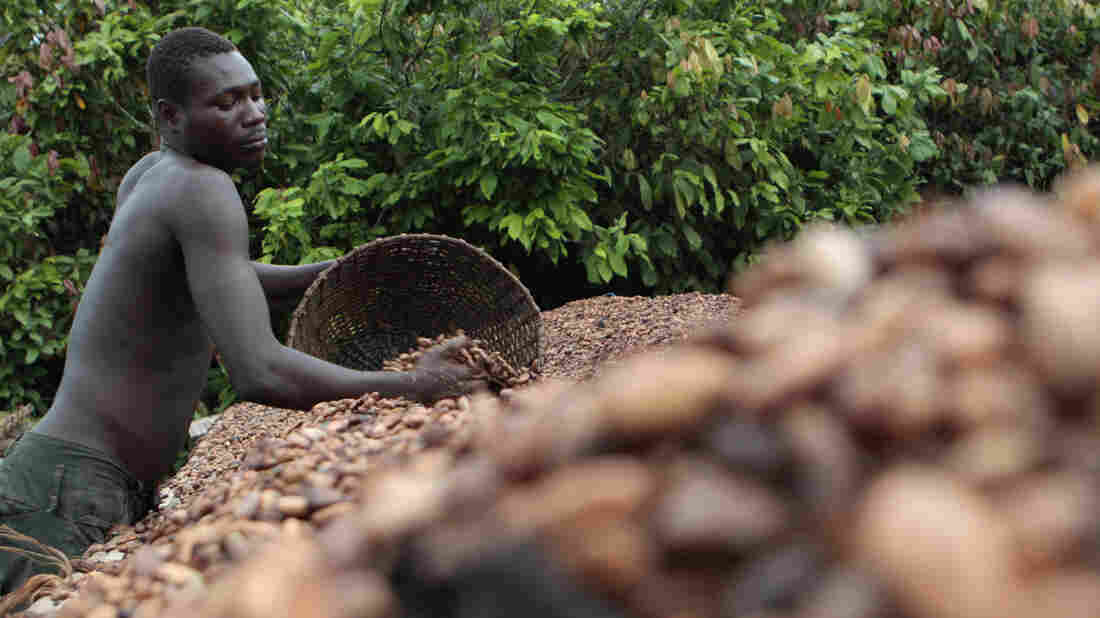 Farmer Issiaka Ouedraogo lays cocoa beans out to dry on reed mats, on a farm outside the village of Fangolo, Ivory Coast. Rebecca Blackwell/AP hide caption 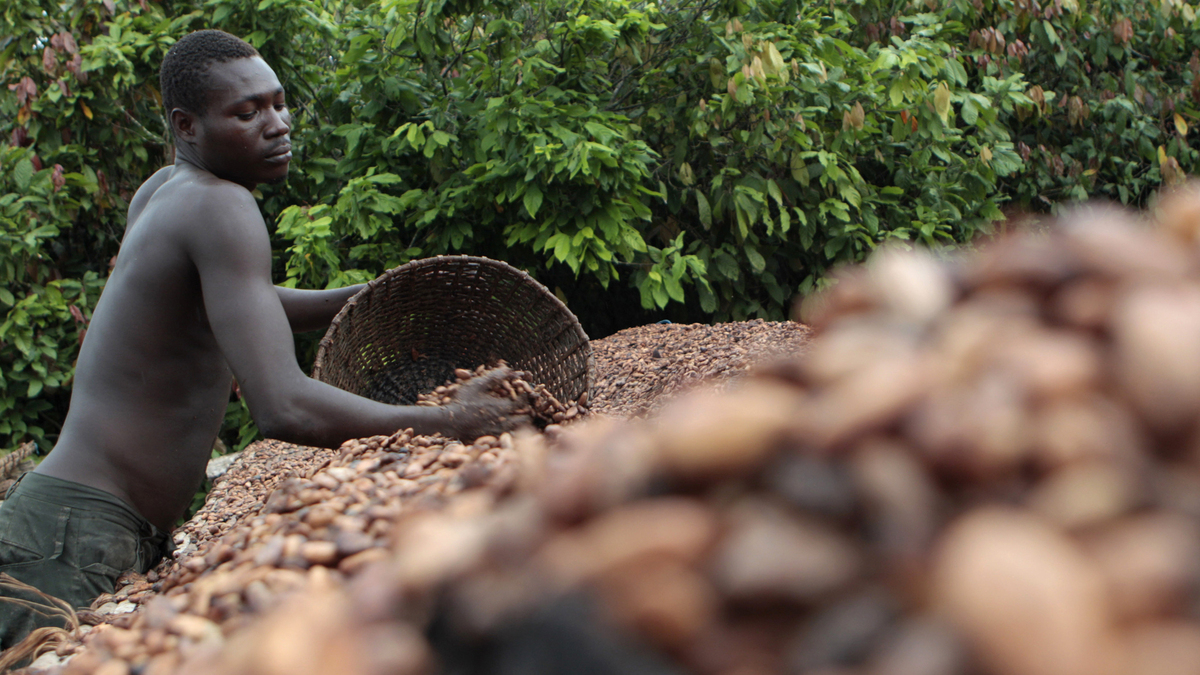 Farmer Issiaka Ouedraogo lays cocoa beans out to dry on reed mats, on a farm outside the village of Fangolo, Ivory Coast.

Jack Scoville was buying himself a chocolate bar a few weeks ago — Hershey's, milk — at a corner store in Chicago. And he noticed the price was just a bit higher than he's used to paying: 5 or 10 cents more. His first thought was not to blame a greedy store owner or the executives in Hershey, Pa.

Scoville is a senior market analyst at Price Futures Group, and he looks at the cocoa commodities market. Last month, cocoa contracts — the price that chocolate suppliers agree to pay for raw cocoa — spiked in large part because of Ebola fears.

"The price made the move to three-year highs in response to the Ebola crisis, on fears that it could spread into Ivory Coast and Ghana," says Scoville.

Ivory Coast and Ghana together produce more than half the world's cocoa. And they're both next door to Ebola-affected Liberia and Guinea.

Now the fear isn't that you can get Ebola from chocolate. Everyone I've interviewed on this story urged me to remind my readers that YOU CANNOT GET EBOLA FROM CHOCOLATE. The fear, rather, was that if Ebola were to jump over the border to Ivory Coast, those cocoa farmers would scatter to avoid exposure to the virus. The cocoa fruits — the seeds of that fruit that we call the cocoa bean — would stay unpicked. And Halloween would become as expensive as Christmas.

Or at least that was the fear until the end of September. Then suddenly the fear vanished. The price of cocoa futures eased back. Maybe the reason was that weeks had passed and Ebola hadn't jumped the border. Or maybe it was because Ivory Coast had reassured traders by locking down its land borders, allowing almost no human traffic from Ebola-affected countries. "The market feels like we dodged a bullet," says Scoville.

That doesn't mean that Bart Simpson will be guaranteed that he can lay his fingers on an affordable Butterfinger in the months ahead.

Those sealed borders could still have an impact on chocolate prices. Most of the workers who harvest cocoa in Ivory Coast are migrants from Liberia and Guinea. Now they can't cross the border to pick the pods. And picking season is the beginning of October.

"If Cote d'Ivoire's agriculture sector loses all of its laborers — that will have a huge impact in terms of the crop and what can actually be harvested," says Edward George, head of group research for Ecobank, a pan-African bank.

Ecobank researchers predict that farms will procure pod-pickers from elsewhere. But they can't be sure how the season will go. And the reason is related to Ebola. Usually at this time of year, chocolate companies send swarms of agronomists into West Africa to count trees and pods, and then use mathematical modeling to predict to great accuracy the world's supply of cocoa this year. Because of Ebola, many of those pod-counters never boarded the plane, even to Ebola-free Ivory Coast and Ghana.

"This information is not coming in," says George. "So this entire cocoa season, we could be walking on in the dark."

Which led me to the most important question of all of my chocolate interviews: Should I stock up on 200 chocolate bars just in case?

"Yes" was George's response. Although he was quick to add: "Except it doesn't keep that well. So I don't know. Unless you're planning to eat 200 chocolate bars in a couple of months."

To put all this in perspective, though, consider: If cocoa prices do spike, people will eat less chocolate. But when closed borders are keeping migrant workers from reaching the fields and sending their wages home, some families aren't eating at all.