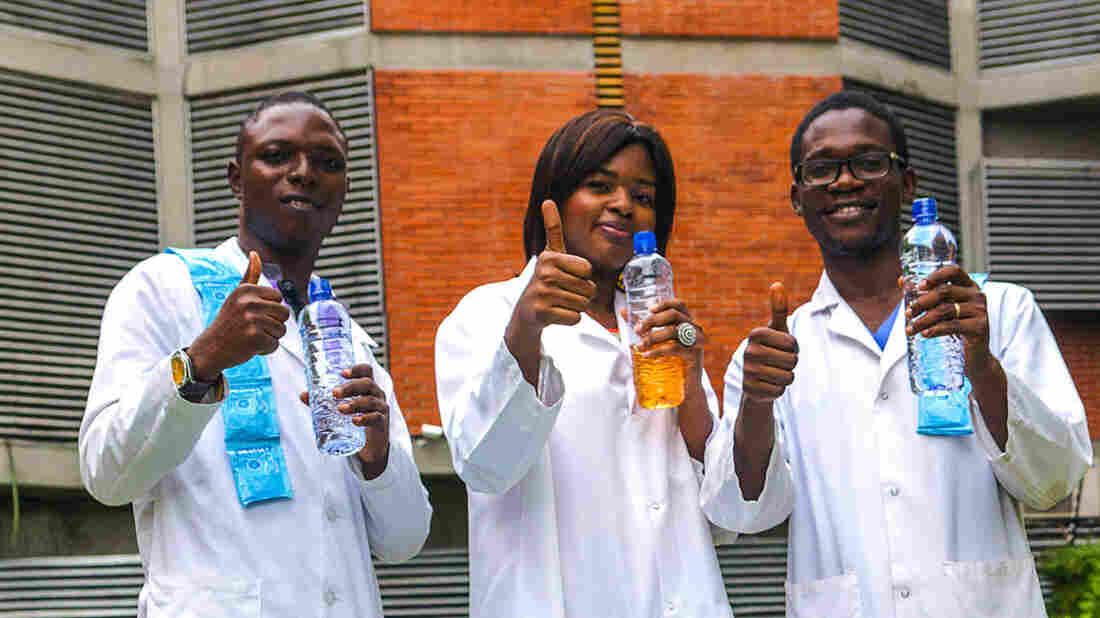 At the onset of symptoms, Dr. Adaora Igonoh (center) and her colleagues began drinking oral rehydration solution. It doesn't taste great but they say it helped them survive Ebola. They each downed over a gallon a day for nearly a week. Andrew Esiebo/Courtesy of WHO hide caption

toggle caption
Andrew Esiebo/Courtesy of WHO 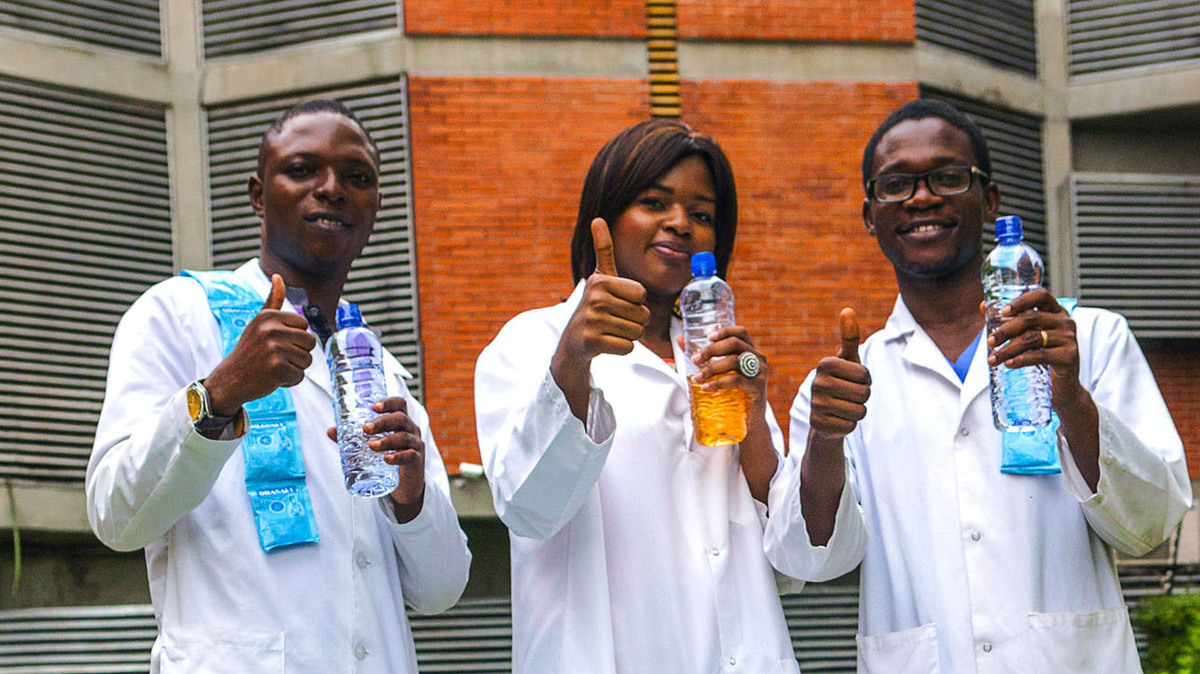 At the onset of symptoms, Dr. Adaora Igonoh (center) and her colleagues began drinking oral rehydration solution. It doesn't taste great but they say it helped them survive Ebola. They each downed over a gallon a day for nearly a week.

Have you ever swallowed unflavored rehydration solution, or ORS? That's what they call the mixture of salt, sugar and water given to Ebola patients.

I've taken more than a mouthful, and urgh! It tastes dreadful.

But doctors who were among Nigeria's Ebola survivors all agree that they may not have recovered from the virus without having forced down the foul-tasting, but apparently life-saving fluid.

The World Health Organization recipe for hydration solution: six teaspoons sugar, half a teaspoon of salt and a quart of water.

The solution often comes in packages as powder made of salt and sugar along with unsavory ingredients like potassium chloride and citrate. A dose of powder is dissolved in roughly a quart of water. Every day after they began feeling unwell, the doctors would drink the ghastly mixture.

Dr. Adaora Igonoh swallowed at least 1.3 gallons every day for almost a week. She says when you're already frightened and depressed in an Ebola ward, feeling weak and battling mouth ulcers and a sore throat, getting ORS down your throat is no fun.

But she and other doctors in Nigeria agree that the rehydration solution was key to their survival. Unlike Guinea, Liberia and Sierra Leone, where the virus has killed up to 70 percent of those infected, Nigeria was declared Ebola-free after eight deaths among 20 cases.

"These patients drank between four and five liters [a little more than a gallon] every day, and this made a huge difference," says Dr. Simon Mardel, a world-renowned viral hemorrhagic fever expert at the University of South Manchester in the U.K. NPR reached him when he was in Nigeria, where he had been dispatched to help fight the Ebola outbreak.

ORS is a low-tech and inexpensive approach that is potentially lifesaving, he says. Ebola victims throughout West Africa often die of severe dehydration that results from diarrhea and vomiting – two common symptoms.

"We cannot have people with a fluid deficit just mounting up day after day," he says. "This disease does not allow you to tolerate the normal degree of dehydration. Dehydration and hypovolemia [when there is not enough blood volume in the body] is the final straw."

Mardel reckons that the number of Ebola deaths could be halved if health workers taught patients how to rehydrate properly with the packaged ORS mixture — and also told them to avoid taking aspirin, which can worsen bleeding.

The rehydration solution should be mixed with the prescribed amount of water and given to patients at the onset of symptoms. And it should be a daily practice.

And if you don't start right away? "You'll soon become, in a few days, too weak to drink it," he says. And if you become dehydrated, your gut won't be able to absorb the nutrients.

"They'll just come back up," he says.

Mardel acknowledges that it's not the best tasting medicine. So he recommends packets of fruit-flavored ORS.

When Dr. Adaora Igonoh began running a fever at home, she drank an orange-flavored solution, which was bearable. The unflavored version she was given in the isolation ward was not.

But she was knew that, because of her vomiting, she wouldn't survive if she didn't keep chugging.