Accessibility links
Blizzard In Nepal Deals A Blow To Porters As Well As Trekkers : Goats and Soda Working as a porter in the mountains is a way out of poverty. But it's a job with great risk. After this month's killer storm, the government is calling for regulations to protect visitors and locals. 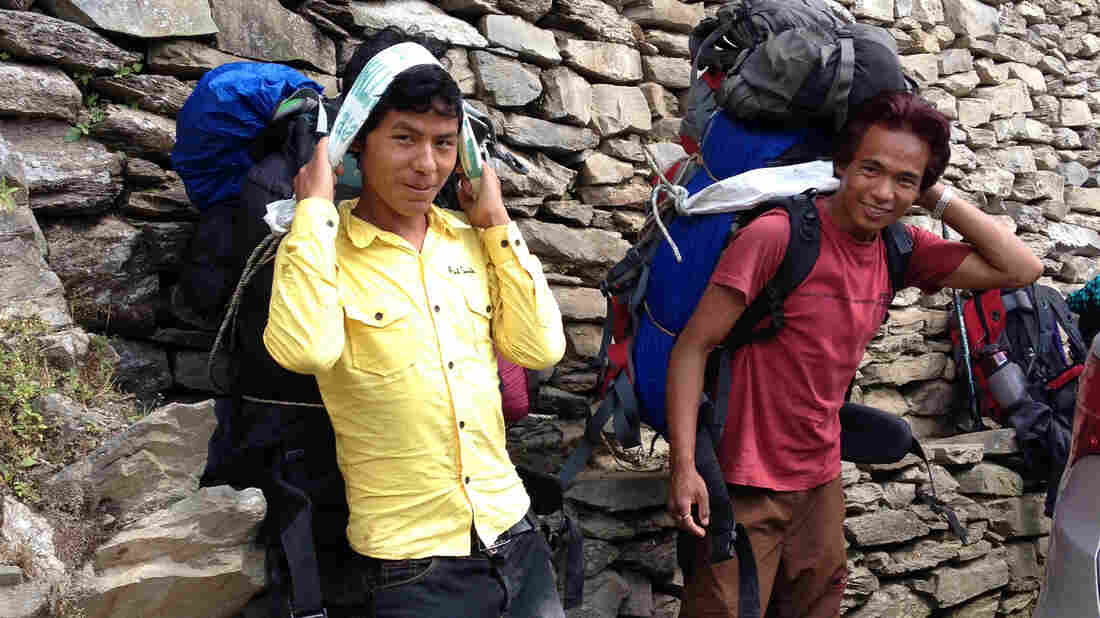 Bilbahadur Tamang, right, and Umesh Lama load up for a trek on the popular Annapurna Circuit. Donatella Lorch for NPR hide caption 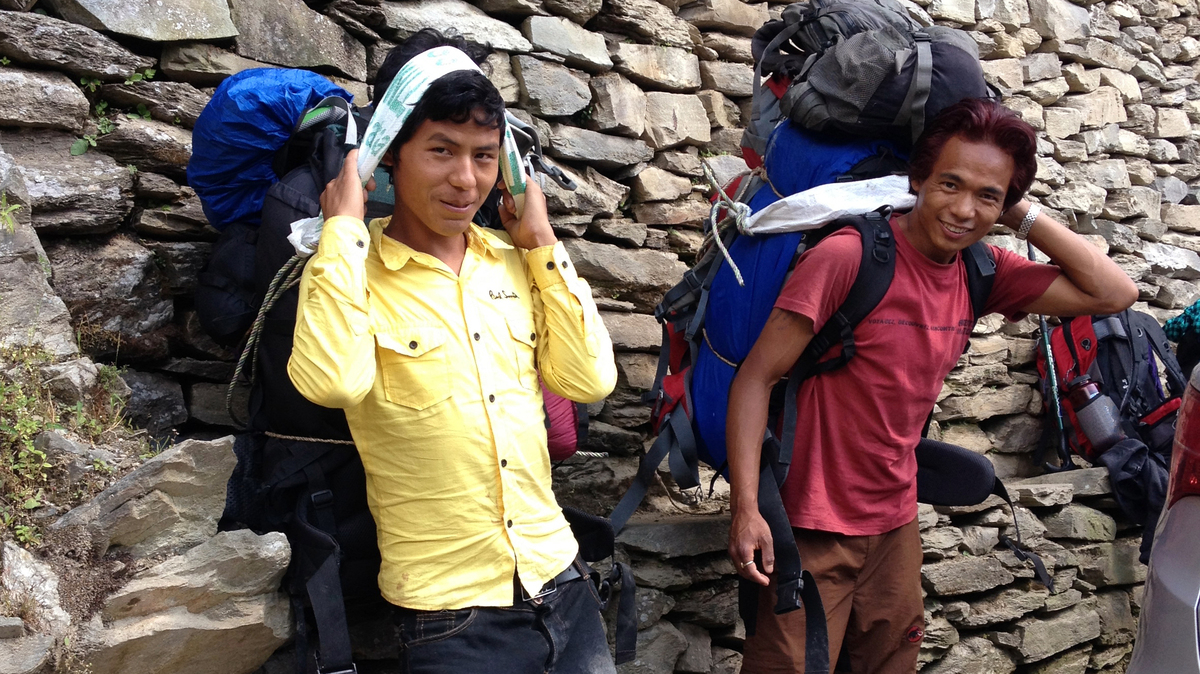 Bilbahadur Tamang, right, and Umesh Lama load up for a trek on the popular Annapurna Circuit.

In early October, blizzard conditions in Nepal killed more than 16 foreign trekkers and 17 locals, most of them lightly-dressed porters who were carrying the trekkers' gear. The tragedy calls attention to the dangers of trekking — and the risky life of local porters.

At 42, Rane Tamang knows the trekking business well. From a poor village in central Nepal and with little formal education, he started work as a porter 25 years ago, lugging 90 pounds of gear up mountains. He moved up to serve as an assistant cook and now alternates between cook and guide.

At Least 20 Trekkers Die In Blizzard, Avalanche In Nepal's Himalayas

The blizzards hit the Thorung La Pass, the high point of the popular Annapurna Circuit. Tamang has crossed the pass over 30 times. "The storm struck so fast, what could the porters do?" Tamang explained during an interview in Katmandu. "Many were walking alone, without experience, and that is why I think many of them died."

In Nepal, tourism is key to the economy. Of 750,000 tourists each year, about a third trek the Annapurna Circuit. There are over 1,000 registered trekking agencies, but in a country with massive underemployment, there is also an underworld of freelance guiding and portering.

Rane Tamang, left, and Padam Ghale. Both men started out working as porters in the mountains of Nepal. Tamang is now a guide and cook. Ghale owns a trekking company. Donatella Lorch for NPR hide caption

Rane Tamang, left, and Padam Ghale. Both men started out working as porters in the mountains of Nepal. Tamang is now a guide and cook. Ghale owns a trekking company.

Porters on Annapurna earn about $11 a day, a respectable sum in a country where the per capita income is $2 a day. So there's a lot of competition for jobs. Plus, many trekkers now go on their own and use mules and yaks to carry gear.

And it's not a year-round occupation. Trekking season is October-November and April-May. Tamang last year worked four treks. This year he finished a trek to Annapurna and leaves soon for a 30-day trek near Kanchenjunga in eastern Nepal.

Many Nepalis who work in the trekking business began as porters. Tamang's son, Bilbahadur, 26, is a porter. His boss, Padam Ghale, 60, owns Shambhala Trekking but started as a porter, making his shoes from old tires. Ghale still guides today.

In Nepal, portering, though grueling, is a route out of poverty — and not just because of the pay. Many porters hope that their clients will sponsor them for English classes, business training or mountain-guiding classes.

The government requires that registered companies insure their porters. Many also provide them with sleeping bags and warm jackets for high altitude. But there is no safety net for freelancers, who often trek in sandals and flimsy windbreakers.

Hundreds of trekkers cross Thorung-La every day, attracting freelance porters and guides who troll for clients at both ends of the pass. If they disappear in a storm, no one will know.

Ghale, who was once snowed in on the pass, says good guides are essential for survival. "You don't leave shelter in a storm," he warns.

Last October, Tamang and Ghale took a group of five French trekkers to Makalu Base Camp. They arrived under blue skies but by nightfall and for the next three days, it snowed. They spent hours shoveling off their tents. With clear weather but snow to their chests, Ghale decided to forge a trail through the blanket of deep snow that had buried all landmarks. A normal three-hour trek took 14. Porters lost their sneakers and wrapped their feet in plastic bags. Tamang and Ghale, who knew the area well, wondered whether they would survive, but everyone made it out. Two porters suffered snow blindness. Others had early stages of frostbite.

"Many times, I have stopped clients from going ahead," Ghale said. "My job is that they stay alive. The mountains will always be here. We can come back when it is safer."

Under criticism for not having an early warning system in place, the government of Nepal says it will introduce new regulations by April that will include a weather warning system, stricter registration of trekkers and a requirement that all trekkers hire trained guides.

The government is also studying the possibility of requiring all trekking groups to carry a GPS tracking device. But good topographical mapping does not exist in Nepal, and shoestring travelers aren't likely to have the money to comply.

Donatella Lorch is a freelance journalist who's based in (and who blogs about) Katmandu, Nepal.