Accessibility links
What's My Risk Of Catching Ebola? : Goats and Soda Folks in the U.S. are in a panic about catching Ebola. Let's just say, you're more likely to be eaten by a shark. The situation in Liberia, however, is starkly different. 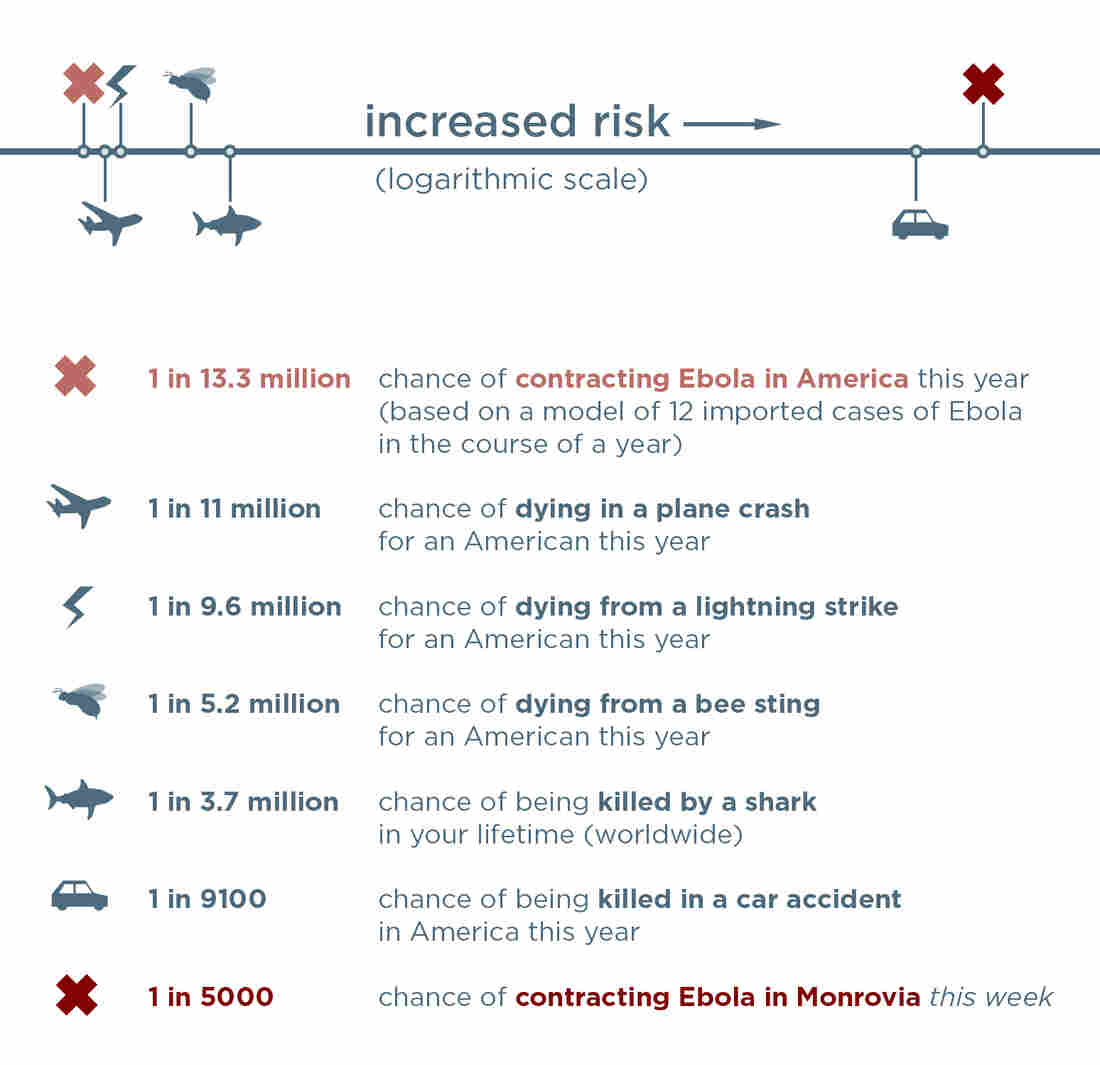 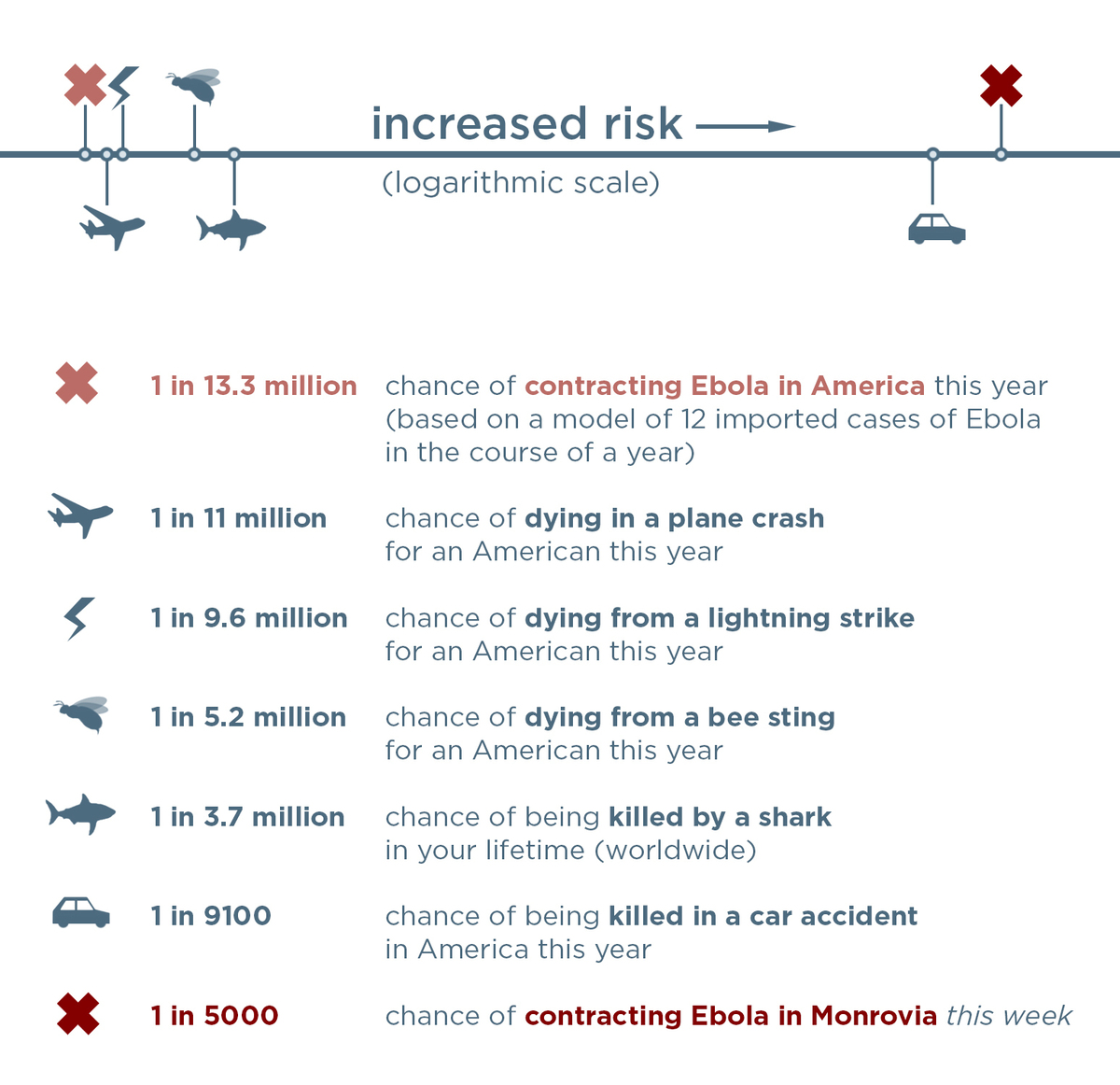 But what does that mean? Are you more likely to be struck by lightning or catch Ebola?

Plane Of Good Samaritans: Why Fly To (And From) West Africa

It all depends on what you do for a living and where you travel. For instance, three of us from NPR are spending 10 days in Monrovia, Liberia, to report on the outbreak. What's our chance of catching the virus?

So far in the U.S., we've had too little data to calculate a real risk. But we can do some back-of-the-napkin math to give some perspective.

Up until now, two people have caught Ebola in the U.S. Both were nurses in Dallas, who cared for Thomas Eric Duncan, the Liberian man who was diagnosed with the virus.

A doctor in New York City tested positive for Ebola Thursday. The Doctors Without Borders staff member — who has been identified as Dr. Craig Spencer — was treating patients in Guinea when he caught the virus. This is the fourth case reported in the U.S. and the second imported case. (Note: An earlier update said the doctor was the fifth case of Ebola in the U.S.)

Ebola is spread through contact with sick people's fluids. So, clearly, nurses and doctors who treat patients have a higher risk than others.

But let's pretend for a minute that the probability of getting Ebola in the U.S. is the same across the whole population (aka, the risk is evenly distributed).

The U.S. encounter with Ebola is unlikely to stop in Dallas. Computational biologists predict air traffic will bring more sick people to the States as the epidemic continues in West Africa.

No one knows exactly how many cases this will be. But one team at Northeastern University finds there's about a 70 percent chance we'll get another imported case by the end of this month. Let's say that trend continues, and we get 12 more cases imported over the next year.

On average, each of these sick people will spread the virus to two more people (that's what has happened in West Africa). Then about 24 people in the U.S. will have caught Ebola.

By comparison, 33 people in the U.S. are struck and killed by lightning each year. So the chance of catching Ebola — even with 12 more imported cases like Duncan — is on par with the odds of getting killed by a lightning bolt (1 out of every 9.6 million people).

So we can all breathe a sigh of relief.

But what about us journalists covering the epidemic in Liberia? Or people who call Monrovia their home?

Here we can calculate a risk based on actual data. More than 2,000 people have caught the virus in Monrovia since the epidemic began.

Of course, the longer you stay in Monrovia, the more your risk goes up because you are continually in situations where you might be exposed to the virus.

For instance, a full year in Monrovia raises your chance of getting Ebola to around 1 percent — assuming the epidemic doesn't grow any faster than it is now.

I told my husband all these stats to help ease his worry. He has been very concerned about my 10-day trip to Liberia. His response? "That's fine, Michaeleen. I understand the risk. But there's just one number I can't get out of my head: the 70 percent fatality rate."