Accessibility links
A Congolese Mother Of Six Is Honored For Her Death-Defying Journalism : Goats and Soda Solange Lusiku Nsimire, an editor who has been subjected to death threats and whose family has been attacked, has won a courage award for her journalism in the Democratic Republic of Congo. 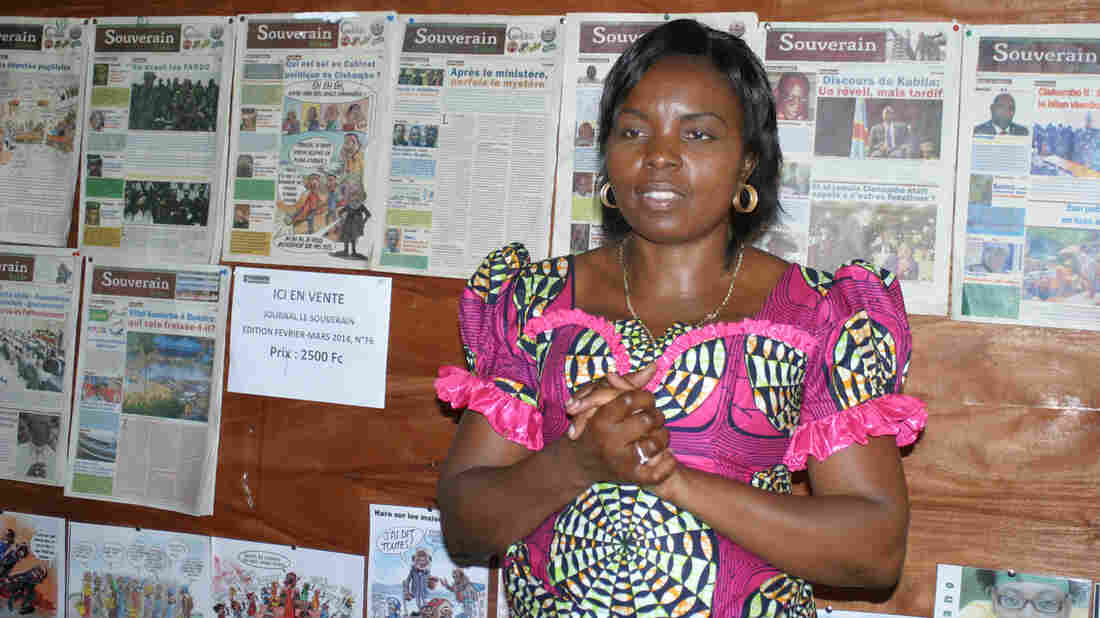 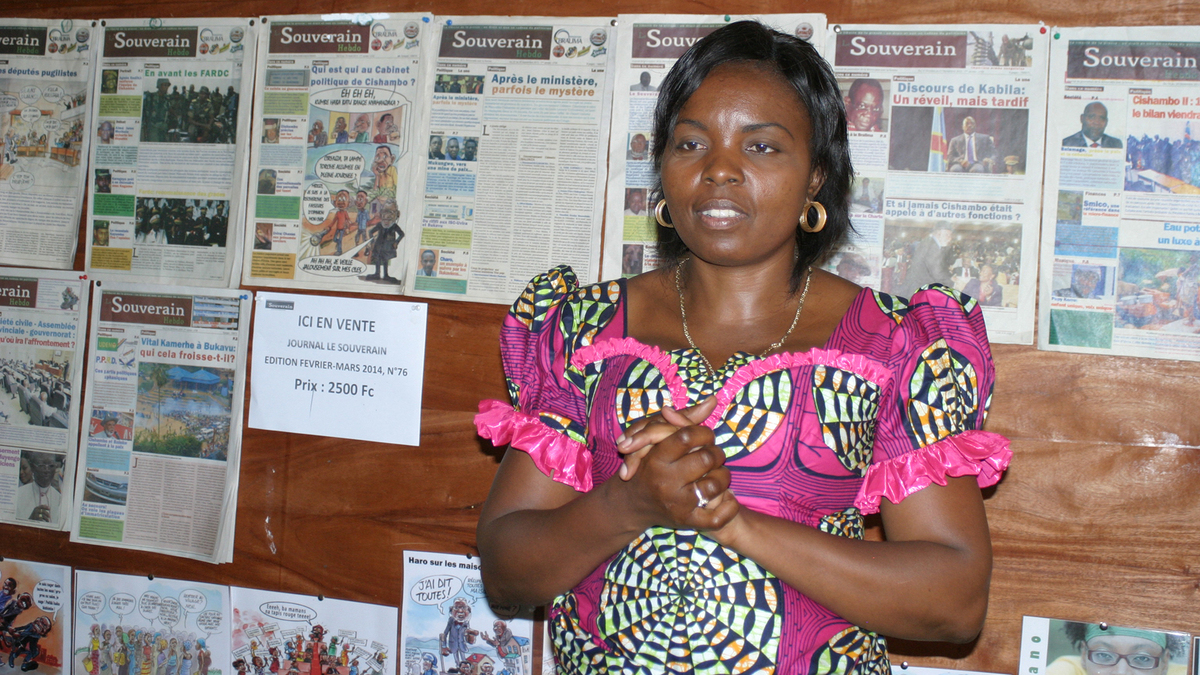 "Journalism is my calling, the print media is my struggle and independence is my motto," says 42-year-old Solange Lusiku Nsimire, a Congolese editor and mother of six.

And it's hard to imagine a more difficult place to be a journalist than the Democratic Republic of Congo (DRC). At least a dozen journalists have been killed since 1992 and there were 90 attacks on journalists in 2012 alone.

It's also a dangerous place to be a woman: rape, domestic violence and senseless killings are part of the daily norm in many parts of the country. Despite significant mineral resources, the DRC is one of the least developed countries in the world, held back by decades of conflict that have resulted in the deaths of an estimated 5.4 million people since 1988.

Lusiku Nsimire, who last week won a Courage in Journalism award from the International Women's Media Foundation, has defied death threats and attacks on her family to publish articles about government corruption, injustices against women and international aid abuses. Since becoming editor-in-chief of Le Souverain, an independent newspaper based in Bukavu in Eastern Congo, in 2007, Lusiku Nsimire's coverage has sent her in and out of hiding. In 2008, armed men showed up at her house in the middle of the night, tied up her husband and children and stole the family's savings. But nothing has stopped her from what she calls her mission to be "a journalist who is a fighter."

Goats and Soda spoke with Lusiku Nsimire about the IWMF award, her experiences as a journalist and her hopes for the future of her country.

A Novice Reporter Begins His Journey In The Congo

You've faced threats, armed robbery and near-death experiences. Other journalists in your country have been killed for continuing to publish. With all of these challenges, what makes you continue working as a journalist?

Asking me to stop being a journalist because I received threats would be like asking me to give up being myself. I am moved by this strong desire to inform people and provide information that is true, verified and credible. I am conducting a fight that will be useful for future generations. I am writing, every day, the story of Eastern Congo, the story of the Democratic Republic of Congo, and I am contributing toward building our collective memory. Our challenge is to create a written testimony so that future generations, when they want to figure out what happened in the past, can find this based on true, valid information. They can reconstruct the collective memory that made us.

Why is journalism so dangerous in the DRC?

In my country, democracy is still young and we have just left behind the years of dictatorship. Journalists must be able to express ourselves freely and if we don't do that, then ordinary non-journalists will never do it. However, our leaders are not used to this yet. It's not part of the way they were trained, and this is true of the people in power and the opposition. They are not ready and have not been exposed to [free press] before. So now we as journalists are the true voice of the multitudes, the ones that promote democracy, that educate people on respecting freedoms. This is new and scary to the leaders.

What are the challenges of being a female journalist in the DRC?

When a woman like me starts something that is considered very daring, like being a journalist, that's considered the act of a rebel. People tend to put banana skins in front of you so that you can fall and you can make mistakes. I enter into a man's world and I throw myself into the race. If men run twice as fast, well, I have to run four times as fast. I have to be twice as good as them. When I, as a woman, decide I want to assert my freedom of speech and express myself independently in my editorials, everyone is shocked. In a world like ours in which weapons circulate freely, journalists have been killed before, so everyone is afraid of telling the truth. People like me who refuse any kind of censorship, any kind of self-censorship, create a lot of enemies.

You're married and the mother of six. How do you balance the safety of your family with your work?

My husband respects my choice, or as I call it, my mission, my vocation, because that's what gives me satisfaction in life. The problem is that my work causes danger and poses a threat to my kids and my husband and everyone is traumatized. I took this job because this is what I am meant to do, because I feel that through my job I am building my country. It's one more stone in the building of a free, democratic Congo. But this should not have all these negative implications for the rest of my family. I am trying right now to put my children in a safer situation. I want to find shelter for my children, who are very much at risk. But as long as democracy is not established and human rights are not respected, I feel that I need to continue reporting. I cannot stop.

What made you want to pursue journalism?

Ever since I was a little girl, I was disgusted and touched by the injustice around me, particularly where women are concerned. I saw women who were victims of all kinds of injustices and still, in spite of that, were fighters. They were still the true support for their families. That's what gave me the will to be a journalist, and not just any journalist, but a journalist who is a fighter, who expresses herself freely, who keeps her head up high.

You once gave a speech in Belgium where you said that in the DRC, a journalist's "life expectancy is 24 hours, renewable." How do you live with that understanding, and how does it affect the work you do?

The 24-hour life expectancy is not just for journalists of the Congo, it's for any Congolese person, particularly in Eastern Congo. At any time, armed people can come to your house and just kill you. Since most of these murders and killings happen at night, every morning that we wake up, we thank God that we are still alive that day. If in other countries, life expectancy is 90 years, but we have 24 hours, we must work hard so that we can accomplish in those 24 hours what other people have 90 years to accomplish.

What's the story of the DRC that the international press is missing?

The sheer number of casualties in my country is revolting, and the role of the international community is truly shocking. [Millions] have died in my country. On top of that, we have 50,000 women that were raped, and that number is only the number that got medical help. Those women have been killed. They've been killed psychologically, they have been killed on the slow burner, as I call it. For just 800,000 in our neighboring country [Rwanda], the entire world was shocked and ran to their help. Why don't those people now come and help us? When our country has been a battlefield, when the body of women has become a battlefield, what did Congo do to the international community to be treated this way? In the Western world, when someone dies, there is a tradition of honoring a minute of silence. If we had to respect a minute of silence for each person that died in the Congo, how many years would that be, if you add all that time up? Just because we are poor in Congo, we still deserve that you stop and think about us, because we are not less human than others. We are fully fleshed and fully respectable human beings with dignity.

Do you think there is a hope for a peaceful future for the DRC?

It's possible if all the Congolese people become aware that they have to play their own roles. If our leaders become aware that they have a responsibility and that they have to stand up to the challenge, and if society as a whole takes responsibility, we will get there. But that also depends on the so-called "big deciders" in the world. When people want to come exploit mineral resources, they can do so by going through the door, and not by trying to sneak in through the window. They can go through the formal way and take advantage of our gold and all the other mineral resources in our country in a way that improves the lives of the population.

What do you hope people will understand about the DRC and the work you do?

Through this award, I want for the entire world to understand that women in Congo are accomplished. Women in Congo are heroines and they are survivors. They have survived rape, insecurity, injustice that the world has brought to them. Women in Congo fight night and day to create a new world, a new order where rights are encouraged for all and there is equality. I want the rest of the world to stop looking at the Congo from the point of view of violence. We no longer want to be victimized, especially as women. We want the world to see us as strong and determined, because we are.