Accessibility links
Awful Moments In Quarantine History: Remember Typhoid Mary? : Goats and Soda Quarantines have been imposed on the sick and contagious for thousands of years. We look at the use — and abuse — of this strategy to stop the spread of disease. 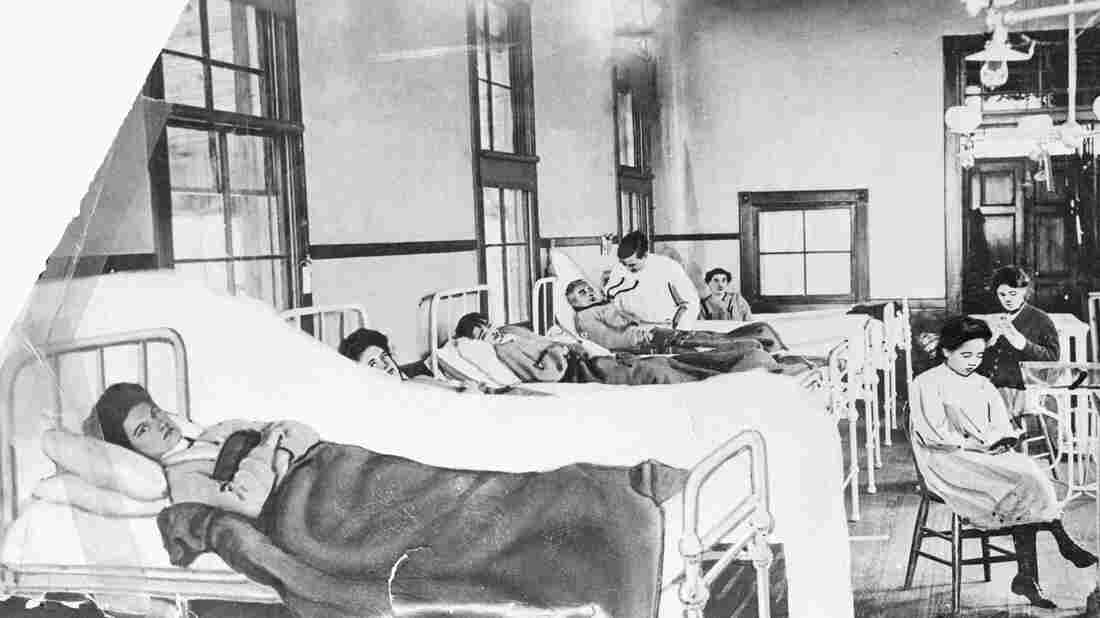 Mary Mallon, known as "Typhoid Mary," was immune to the typhoid she carried. Working as a cook, she spread the disease in New York and ended up quarantined on Brother Island (above) for more than two decades. Bettmann/Corbis hide caption 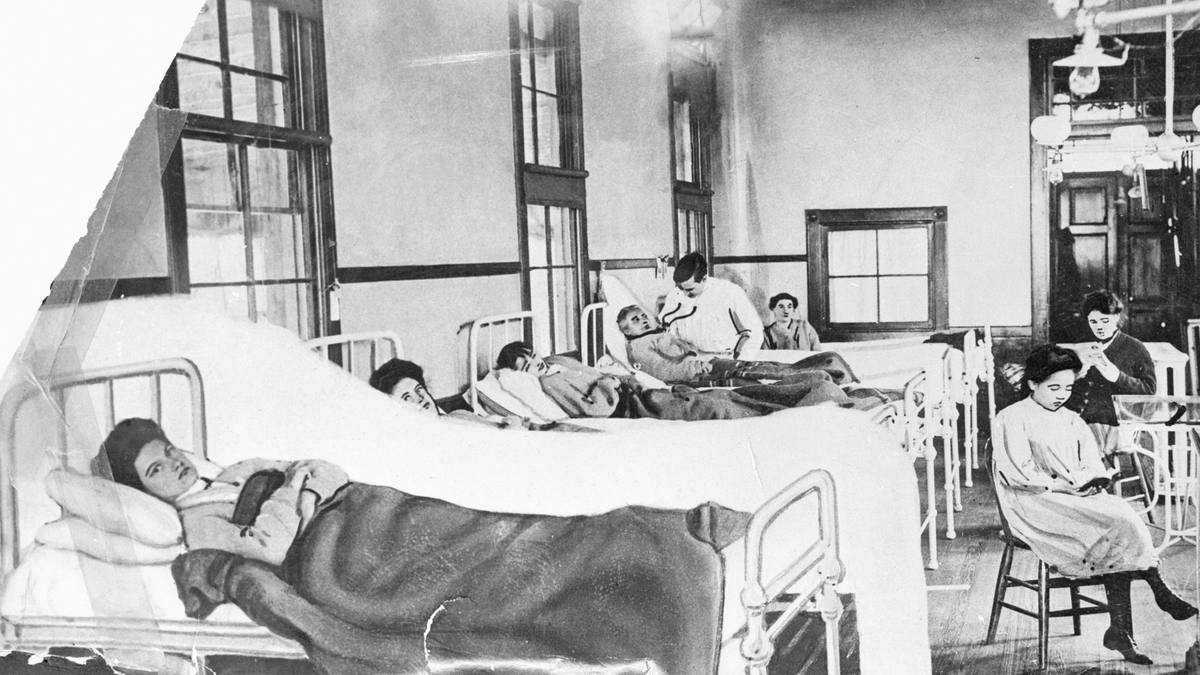 Mary Mallon, known as "Typhoid Mary," was immune to the typhoid she carried. Working as a cook, she spread the disease in New York and ended up quarantined on Brother Island (above) for more than two decades.

When American nurse Kaci Hickox came home after treating Ebola patients in Liberia, she was quarantined in a tent at Newark Liberty International Airport for three days — even though she showed no signs of illness.

The idea of putting a possibly sick person in quarantine goes back to the ancient texts. The book of Leviticus tells how to quarantine lepers. Hippocrates covered the issue in a three-volume set on epidemics, though he came from a time in ancient Greece when disease was thought to spread from "miasmas," or foul-smelling gas that came out of the ground. With proposed quarantines for Americans exposed to Ebola in the news, we offer a look at quarantine use — and abuse — over the ages.

The so-called Black Death killed 20 million Europeans in the 14th century. So Venice, a major trade port, grew nervous. If a ship was suspected of harboring plague, it had to wait 40 days before any passengers or goods could come ashore. Venice built a hospital/quarantine center on an island off its coast, where sailors from plague-infested ships were sent either to get better, or, more likely, to die. This 40-day waiting period became known as quarantinario, from the Italian word for 40. As opinions about the disease changed, the isolation period shrank to trentinario — 30 days — but the original name stuck.

Almost 5,000 people died over the course of two years, about a tenth of the city's population. Thousands fled for the countryside, and at the height of the epidemic, when nearly 100 people were dying every day, the city government collapsed. Philadelphia was the capital of the country, but the federal government evacuated rather than face the scourge. The best known cure at the time was to "bleed" patients of infected blood and give them wine — and a popular theory on stopping the disease was to quarantine sailors at the Lazaretto, a hospital outside the city. But the disease is spread through mosquitoes, so quarantine was not as effective as the cold snap that eventually killed the infected insects. The Lazaretto, named after Lazarus, the Biblical leper treated and brought back to life by Jesus, remains the oldest surviving quarantine hospital in the United States.

In 1892, a boat carrying many Russian Jewish immigrants arrived at Ellis Island. Passengers in steerage class had developed such bad cases of body lice that the harbor inspector declared he had "never seen a more bedraggled group," according to University of Michigan medical historian Howard Markel. Lice led to typhus, but by the time that disease was discovered, the passengers had spread out to boarding houses and family homes across New York's Lower East Side. At least 70 were rounded up and quarantined in tents on North Brother Island in the East River. An outbreak of cholera followed in New York, from a ship bringing more Russian Jewish immigrants. According to Markel, the front page of The New York Times ran a piece saying, "We don't need this kind of riff-raff on our shores," referring to Russian Jews. It wasn't an op-ed, he notes.

City authorities strung rope and barbed wire around a 12-square-block section of Chinatown (after allowing all Caucasian residents to leave). The cause: fear of bubonic plague, after a Chinese immigrant was found dead in a hotel basement. The quarantine was lifted after a few days, but not before countless Chinese laborers had lost their jobs. This "bubonic bluff," as it became known in the press, prompted ugly discussion — never put into action — about mass deportation of Chinese immigrants.

A History Of Quarantine, From The Black Death To Typhoid Mary

A History Of Quarantine, From The Black Death To Typhoid Mary

You've probably heard of Mary Mallon, better known as "Typhoid Mary." She was an Irish-born cook who carried the bacteria that causes typhoid fever, a form of salmonella that can cause fever, diarrhea and death. But Mallon herself was immune to the disease. When authorities figured out that her work as a cook had caused the city's typhoid outbreak, she was sent to North Brother Island for a three-year quarantine. She promised never to cook for others again. But she broke her word. (She was especially fond of making peach ice cream.) When apprehended in 1915, she was sent back to the island for the rest of her life — 23 more years.

Venereal disease in the United States (1917)

With World War I raging, the U.S. military became concerned about the number of young men ineligible for the draft because of sexually transmitted diseases like syphilis and gonorrhea. They also noticed an uptick in "camp girls," prostitutes and other women hanging around U.S. training grounds and military recruitment centers. A federal order allowed for the incarceration of prostitutes and camp girls until they were deemed STD-free via mandatory testing. Harvard University medical historian Allan Brandt estimates at least 30,000 women were picked up in raids. "There's no evidence that this impacted the rates of transmission," he says. "But there was this notion that these women constituted a serious threat to our success in the war." He notes that while the women were being rounded up and held in prison, often long after they'd tested negative, the Army was issuing condoms to soldiers shipping off to France.

This global pandemic, which killed an estimated 50 million, prompted quarantine and isolation, as well as school cancellations in Europe and a ban on public gatherings in parts of the U.S. These methods merely held the disease at bay temporarily and were "hugely socially disruptive," according to University of Michigan's Markel. Influenza is one of the most contagious diseases in the world. A few minutes with a patient who is coughing and sneezing can be enough to transmit the disease. For comparison, Markel says, you'd need to spend eight hours with a tuberculosis patient to be infected.

There was no AIDS quarantine, but that doesn't mean some people didn't want one. In a 1985 Los Angeles Times poll, 51 percent of respondents supported quarantining AIDS patients. "There is this idea of building a wall against infection," says Harvard's Brandt. "But we know how AIDS is transmitted, through very specific activities." No quarantines went into effect, he says, thanks to a loud opposition movement.

Though the severe acute respiratory syndrome (SARS) pandemic of 2003 led to quarantines in many different countries, Canada's response was the most disproportionate to the risk. According to the U.S. National Institutes of Health, Canada quarantined almost 100 people for every confirmed SARS case in the country. Though Toronto only had 250 probable cases, about 30,000 people were confined in hospitals and their homes. A comparable number were quarantined in Beijing, which had 2,500 cases.

Andrew Speaker, a lawyer from Atlanta, was suspected of having extensively multidrug-resistant tuberculosis, a dangerous version of the infectious and deadly respiratory disease. While awaiting test results, Speaker flew to Europe for his wedding and honeymoon, hitting Paris, Athens, Mykonos island, Rome and Prague. Then he flew to Montreal and was able to cross the border to the U.S., where he was put under the first involuntary isolation order since 1963 (that one occurred when a traveler was incorrectly suspected of having smallpox). Speaker apologized to those he'd flown with but insisted the Centers for Disease Control and Prevention told him he was safe to travel. (CDC disagrees.) Good news: He didn't infect anyone.

Shades Of The Middle Ages: The Plague Popped Up In China And Colorado

China took a page from San Francisco's turn-of-the-century playbook when it faced a single case of the bubonic plague this summer. A man died of the disease after feeding a dead, plague-infected marmot to his dog in the northwestern city of Yumen. Over 150 people who had contact with the man were placed in quarantine; several districts of the city were sealed off, isolating thousands. Yanzhong Huang, a fellow for global health at the Council on Foreign Relations, said in an interview with The Guardian, "SARS taught Chinese leaders ... the wrong lesson — that quarantine was the magic bullet in addressing any major infectious disease outbreak." After two days, the quarantine was lifted; no other cases were reported.

Ebola in Liberia and Sierra Leone (2014)

In Sierra Leone, A Lockdown ... Or A Time To Reflect?

In Liberia, the neighborhood of West Point was cordoned off for 10 days in August after residents raided a center for suspected patients. Patients fled into the densely populated slum, prompting the government's decision to isolate the neighborhood for 21 days, the incubation period for the disease. Protests ended the quarantine after 10 days. In neighboring Sierra Leone, a three-day quarantine in September asked everyone to stay at home while health workers went door to door, looking for the sick and delivering bars of soap. Doctors Without Borders, the medical organization that's fighting Ebola, said, "It has been our experience that lockdowns and quarantines do not help control Ebola, as they end up driving people underground and jeopardizing the trust between people and health providers."