Accessibility links
Why My Grandma Never Had A Pap Smear : Goats and Soda Women in the developing world may never be tested for cervical cancer. Clinics are far away, cultural biases may keep them away. Now an inexpensive test lets them do it themselves.

Why My Grandma Never Had A Pap Smear

Why My Grandma Never Had A Pap Smear 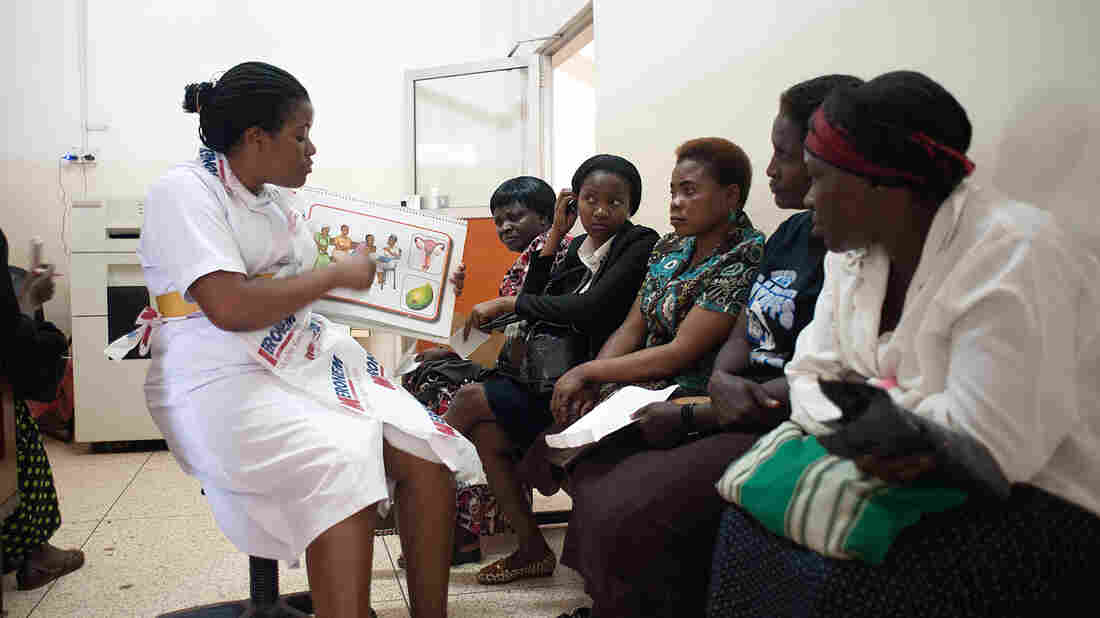 A nurse uses a diagram of the female reproductive system to explain the do-it-yourself careHPV test at the Uganda Cancer Institute in Kampala. Will Boase/PATH hide caption 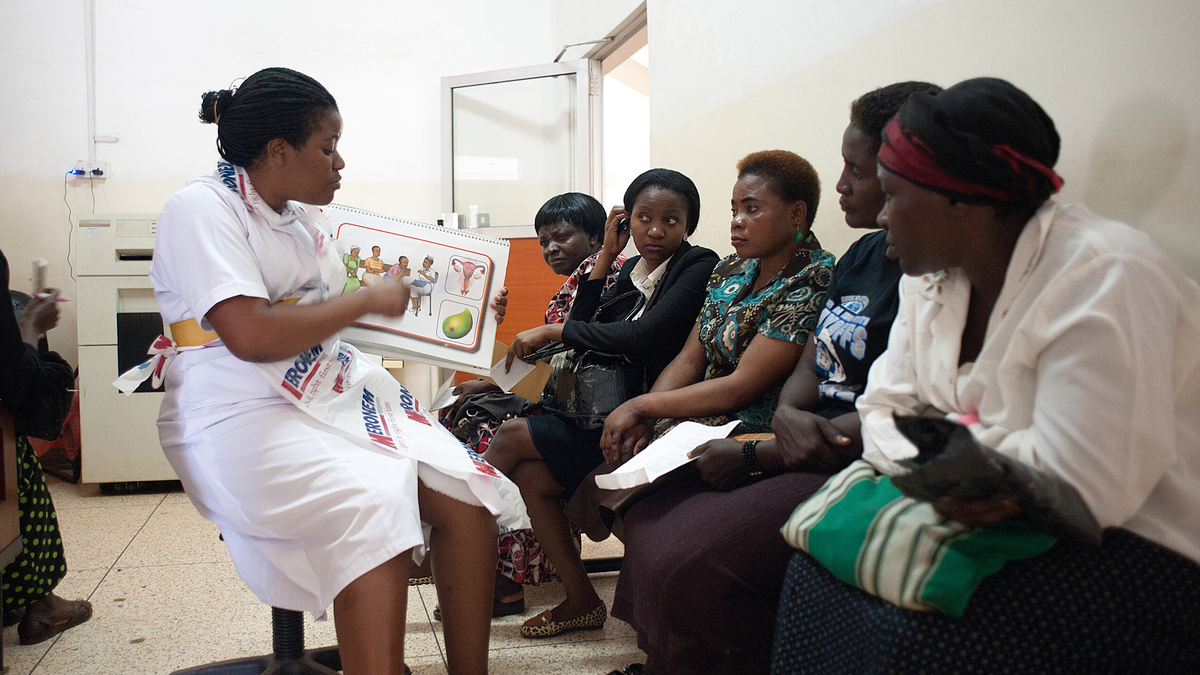 A nurse uses a diagram of the female reproductive system to explain the do-it-yourself careHPV test at the Uganda Cancer Institute in Kampala.

"So, did Grandma ever have a Pap smear?"

A strange question for a son to ask his mom, as I did last Thursday, but it came to mind because of careHPV.

The careHPV test is a quick, simple DNA test for the primary cause of cervical cancer — human papillomavirus (HPV) — could overcome serious obstacles to screening for cervical cancer in developing countries.

Rather than visit a doctor who prods the cervix and swabs it for tissue specimens, women conduct their own careHPV tests at home in minutes. Trialed in seven countries since 2007, careHPV eliminates the need to expose one's private parts to a stranger — a tremendous barrier in some cultures.

My mom's answer to my question was "no," primarily because she and her mother grew up in rural Nigeria. In developing countries like Nigeria, fewer than five percent of women go for screening for the third leading cause of cancer in women. Of the 500,000 women around the world who develop cervical cancer each year, 85 percent live in developing countries or rural settings.

In the U.S., by comparison, women are predominately screened by Pap smears — every 1 to 3 years — even though the test isn't very good at its job of finding cervical abnormalities. Pap smears only detect HPV or other signs of cervical cancer about half the time. Still, reliance on frequent Pap smears has helped cut U.S. cervical cancer rates in half over the last 35 years by identifying women who need treatment.

But "Pap just hasn't worked for developing countries," says Scott Wittet, an advocate for cervical cancer prevention at PATH, a Seattle-based nonprofit organization that worked with the biotech company Qiagen and the Bill & Melinda Gates Foundation to develop careHPV. A multicountry study published earlier this year found careHPV was more effective than Pap smears at detecting potential cases of cervical cancer. Vaginal careHPV caught 70 percent of cases across clinics in India, Nicaragua, and Uganda, while the accuracy of Pap smears ranged from 40 percent to 70 percent.

The problem with Pap in this study, is the lack of labs and technicians to complete error-free Pap smears. Even then, weeks can pass before results are available. For women in developing nations who live in villages far from health centers or hospitals, attending a follow-up appointment may not be an option. A 2008 study in Latin America and the Caribbean found that follow-up rates ranged from 90 percent (in Chile) to as low as 20 percent (in Mexico).

Another benefit of careHPV is that it tackles the cultural resistance that often surrounds Pap smears. In conservative regions, husbands may balk at the idea of their wives being examined by male doctors. One idea has been to send female health workers to rural regions, but they're often scarce in these countries.

"We've had this experience in Central America, especially with indigenous populations," says José Jerónimo, senior adviser on women's cancers at PATH. Next year, PATH will send 110,000 careHPV tests each to Nicaragua, Guatemala and Honduras. The $5 tests will be provided free of cost.

While vaccination against HPV helps prevent cervical cancer, it must be done when girls are young. Women who've never been vaccinated must be screened. 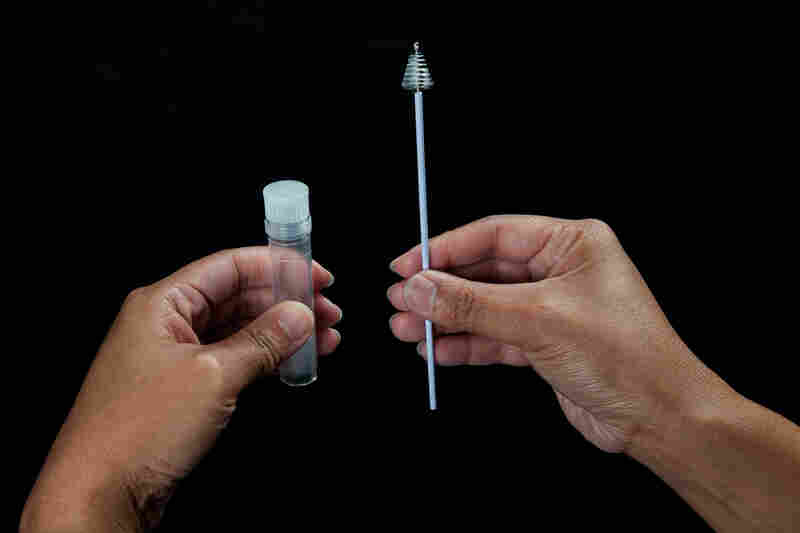 With the CareHPV test, women use the brush to take vaginal tissue samples, then put the specimen into a test tube. Patrick McKern/PATH hide caption 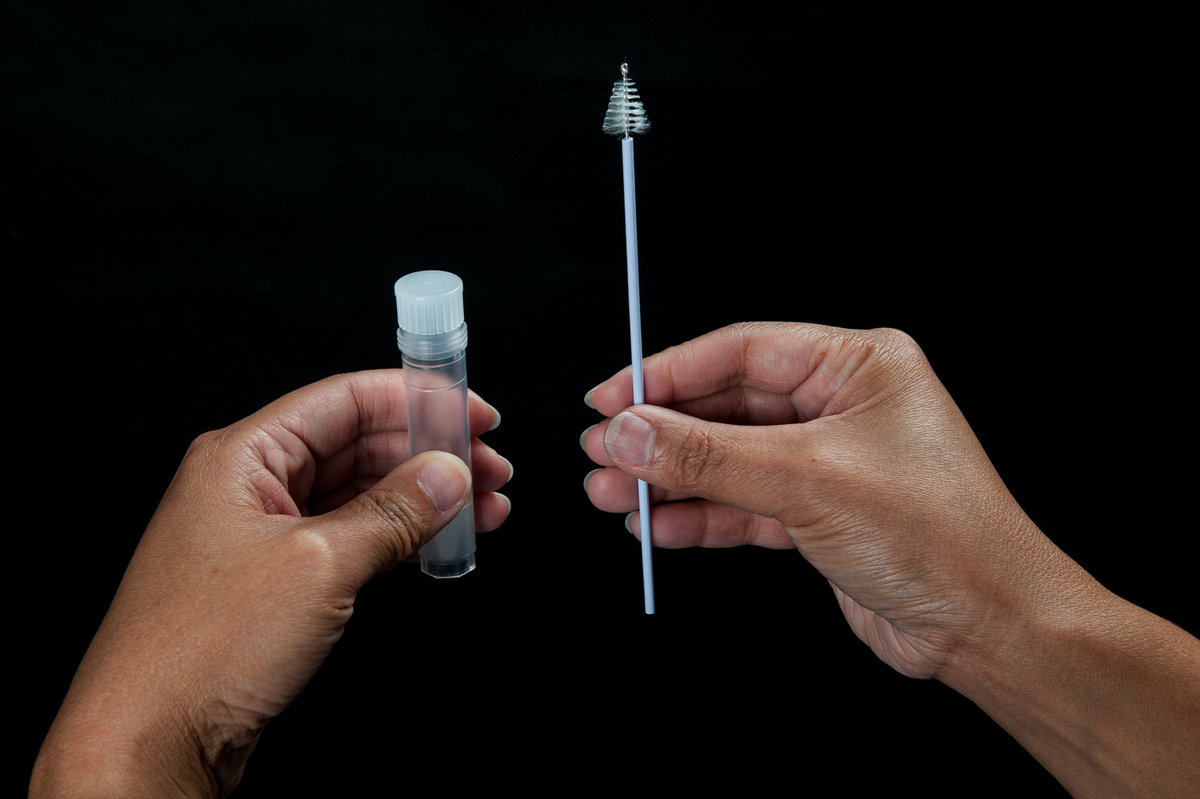 With the CareHPV test, women use the brush to take vaginal tissue samples, then put the specimen into a test tube.

In Kampala, Uganda's capital, gynecologist Carolyn Nakisige has field-tested careHPV at her clinic at the Mulago Teaching and National Referral Hospital. Most women reported a preference for self-testing rather than a doctor's exam. Nakisige used pictures and videos to show patients how to conduct the test: With three quick turns of a soft brush, they can collect vaginal tissue samples. "We allowed them to feel the brush in order to alleviate fears of hurting themselves," says Nakisige. Then the samples are dropped into a plastic test tube with a liquid that preserves the cells. A technician with basic training can deposit the specimen into a shoebox-sized machine that delivers results within in three hours.

The test can be deployed in far-flung places, too. "We envision a mobile clinic could drive to a rural village and collect 90 to 100 samples in just a few hours," says Wittet. So far it's been used by PATH in China, Guatemala, Honduras, India, Mexico, Nicaragua and Uganda. And the biotech company Qiagen, careHPV's developer, will provide the screening machine for free to any hospital or health organization that continues to buy the $5 specimen collectors.

Using CareHPV offers a chance to diagnose HPV, identify potential cancerous lesions and provide treatment all in the same day. Doctors can check for those lesions by using visual inspection and can quickly treat and remove the harmful tissue. By pinpointing patients with cancer-causing strains of HPV, as careHPV does, the test can help doctors devote time to the women who need care the most.

Like the Pap test, careHPV tests are most effective if they are repeated every year. But "even screening a woman one time can have a huge impact," says Leslie Bradford, a gynecologic oncologist at UMass Memorial Medical Center in Worcester. Studies have found that just one screening in a woman's lifetime can reduce her chance of dying from cervical cancer by 35 percent.

Older Women May Actually Be More At Risk For Cervical Cancer

My grandmother was lucky: she never developed cervical cancer. (In fact, she lived to be 95!) CareHPV may help other women in developing nations have a chance at a long life, too.