Accessibility links
How Liberia Is Starting To Beat Ebola, With Fingers Crossed : Goats and Soda There's potentially some good news about Ebola: While cases are still rising in Sierra Leone, the outbreak shows signs of slowing in Liberia. Communities are banding together to get Ebola out. 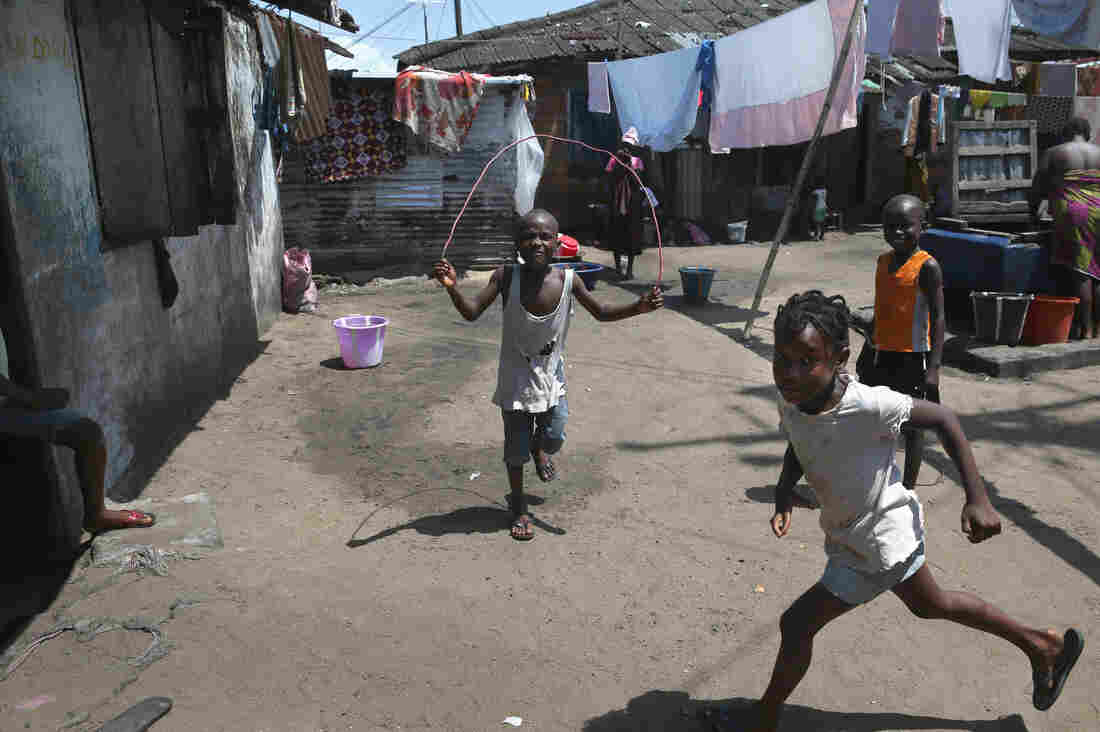 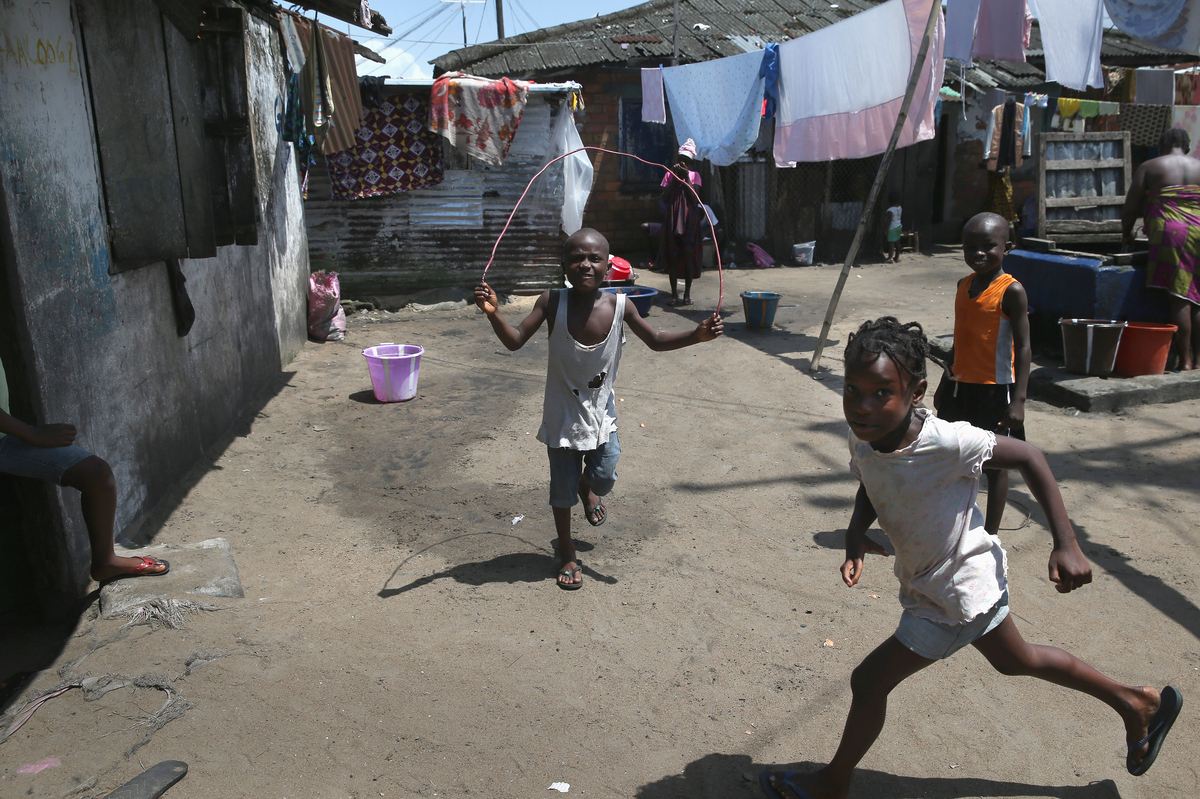 Children play in the West Point neighborhood of Monrovia last week. West Point has been hit hard by Ebola. So local leaders formed their own Ebola task force, which goes door to door looking for cases.

Editor's note: In an investigative report published on October 11, 2018, ProPublica and Time Magazine reported that an employee of More Than Me, a charity mentioned in this NPR story, raped many of the girls that the charity had been set up to protect.

If you want the inside scoop about what's happening with the Ebola outbreak, then just hang out at the Mamba Point Hotel in Monrovia.

It's packed with scientists from the Centers for Disease Control and Prevention, international reporters and a bunch of guys and gals in camouflage from the U.S. Army.

Nobody would want to eradicate Ebola from their own neighborhood more than those who live in the neighborhood.

Katie Myler, founder of the nonprofit More Than Me

They all like to hang out at the bar during lunchtime. That's where I met Joel Montgomery, a top epidemiologist at the CDC. We head off to a quiet room, and he starts telling me about all of his trips to Monrovia.

"When I was here in August, not to sound like, making this too colorful but, I mean there were ... literally dead people on the streets," Montgomery says. "And the burial teams were picking up 50 to 60 bodies a day."

At that point, the country had been on a devastating path. Clinics were stretched way past capacity. And even getting an Ebola test could take days, or weeks if you lived in the jungle. Samples had to be sent by a series of canoes and motorcycles to the only lab in the country.

The epidemic was doubling every few weeks. Some computational biologists were predicting more than 20,000 cases by the end of October. 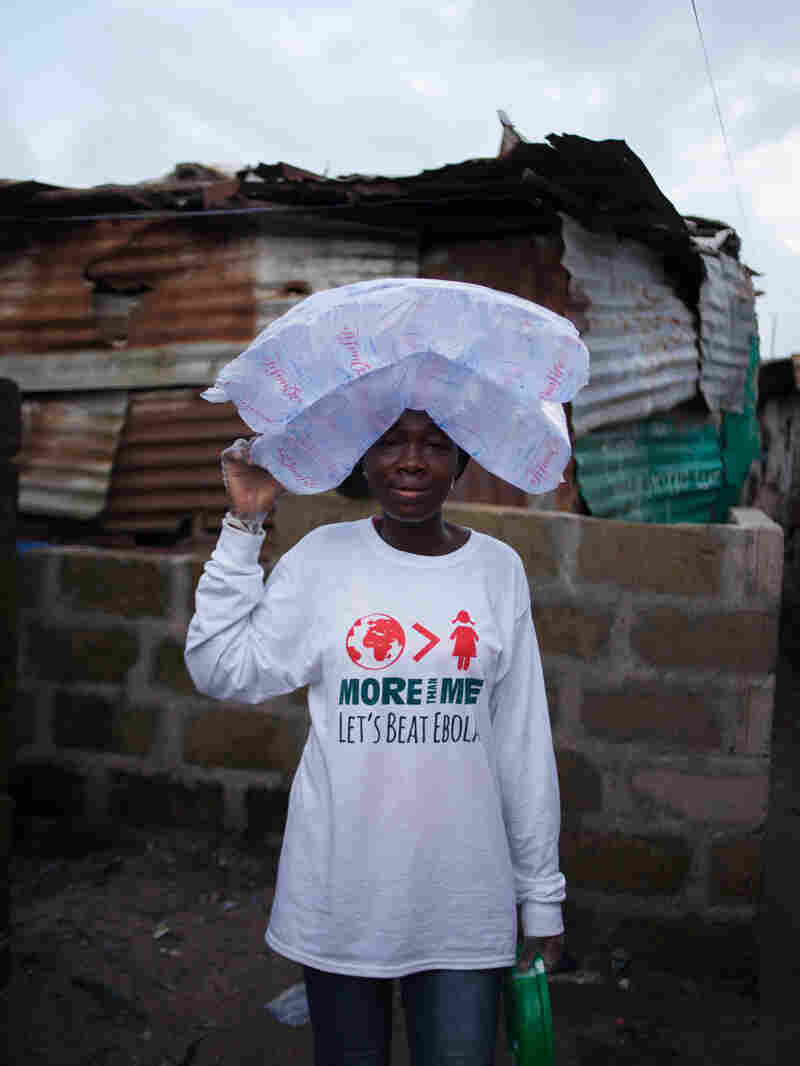 Let's beat Ebola! Since August, the nonprofit More Than Me switched its focus from educating girls to getting Ebola out of the West Point neighborhood. Krubo is a social worker with the group who helps teach people about Ebola. M Holden Warren/More Than Me hide caption 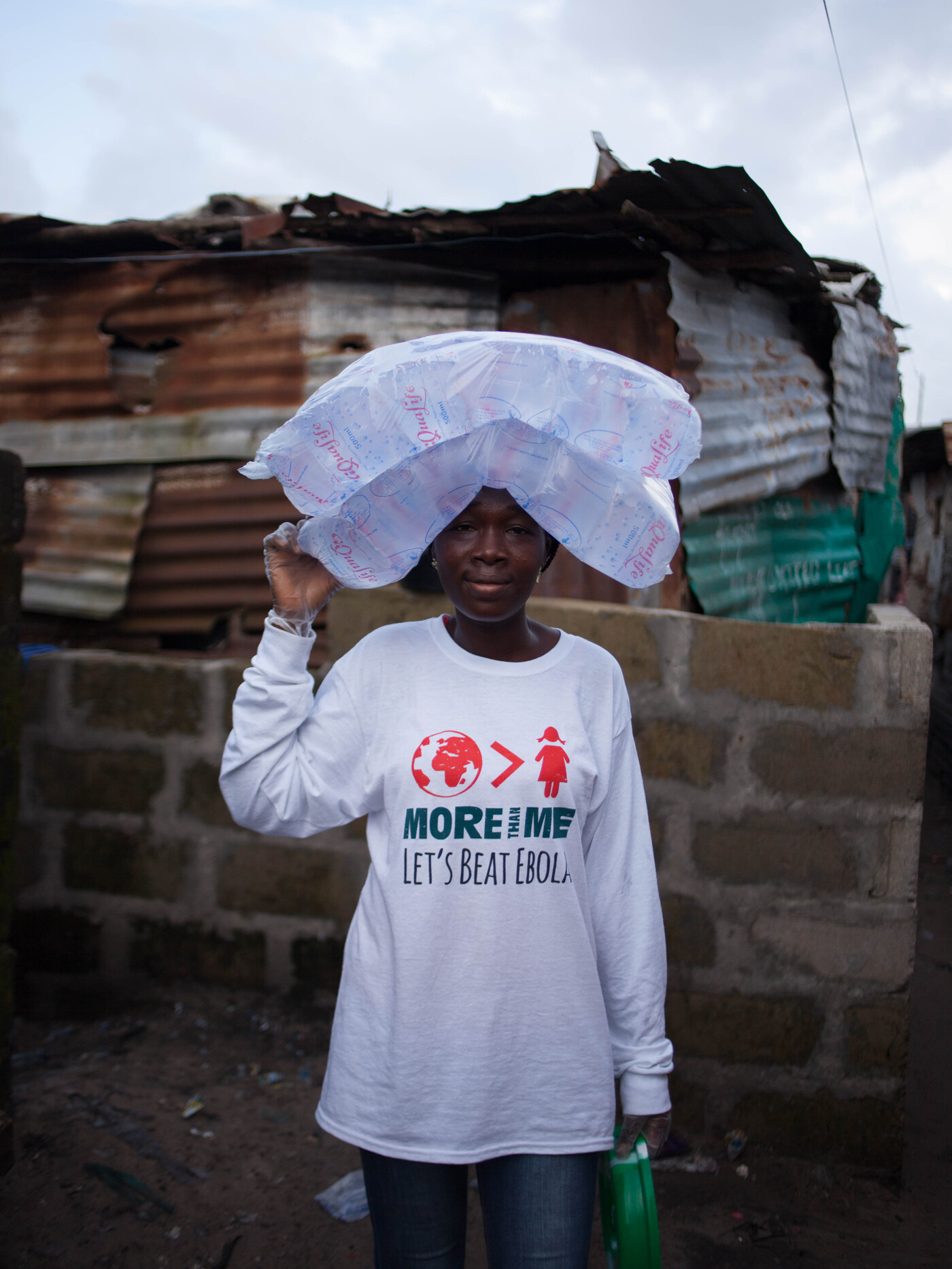 Let's beat Ebola! Since August, the nonprofit More Than Me switched its focus from educating girls to getting Ebola out of the West Point neighborhood. Krubo is a social worker with the group who helps teach people about Ebola.

M Holden Warren/More Than Me

But officials are seeing a very different situation on the ground now. The country has had about 6,500 cases. New cases are on a decline, dropping off by about a 100 a week, on average, since early October.

Liberia has also beefed up its ability to deal with the virus. The country has quadrupled its diagnostic labs. And hundreds of new beds have been added in Ebola clinics.

"It does feel much better than it did in August, I've got to tell you," Montgomery says. "The pulse, you know? The people on the street. It just feels different. It feels more controlled now than it did."

So has the tide turned?

"It's too early to say," Montgomery says. "Because as soon as you say that, you're going to be wrong."

The country is still reporting a large number of cases. And the virus is still popping up in new parts of the country, Montgomery notes.

But there's another positive sign that doesn't get much attention, he says: Liberians are taking the matter into their own hands.

"I think a lot communities are now starting to get it and figure out how they can limit spread, prevent infection and prevent transmission," he says, "because this is not ... rocket science."

That same day, at that same bar, I heard about a woman in Monrovia helping with a grass-roots campaign in West Point, one of the city's poorest neighborhoods.

The project sounded awesome. So I emailed Katie Meyler the day after I returned to the States. She called me on her cellphone from a market near West Point.

Life Goes On, Even With The Specter Of Ebola

Meyler is the founder of More Than Me, a small nonprofit that runs a free school for girls in West Point. The school had to close when Ebola came. So Meyler knew she needed to turn her attention to getting the virus out of West Point.

A few months ago, she says, leaders in West Point banded together and built their own Ebola task force.

"They started going door to door to door, first with information about what Ebola is and how to keep yourself safe," Meyler says.

Then the team started training people to be nurses, so the team could actively look for Ebola cases in West Point. When the nurses find someone sick with what looks like Ebola, the team calls an ambulance and gets the person out of the community. All this hasn't cost much money, Meyler says.

"These guys just need boots because they're like going door to door in flip-flops looking for sick people," she says. "They need transportation to get the sick out as soon as possible. It doesn't have to be a billion-dollar ambulance."

The shoestring operation is working well. Cases in West Point have dropped. And the government wants to expand the project to five other neighborhoods in Monrovia.

"The way to reduce the cases," Meyler says, "is to listen to people who live in the community."