Accessibility links
When A Loved One Has Ebola, How Can You Reach Out Without Touching? : Goats and Soda A hug, a back rub, holding hands — all these shows of compassion are dangerous when the patient has Ebola. Is there any way to make up for the loss of the ability to touch?

When A Loved One Has Ebola, How Can You Reach Out Without Touching?

When A Loved One Has Ebola, How Can You Reach Out Without Touching? 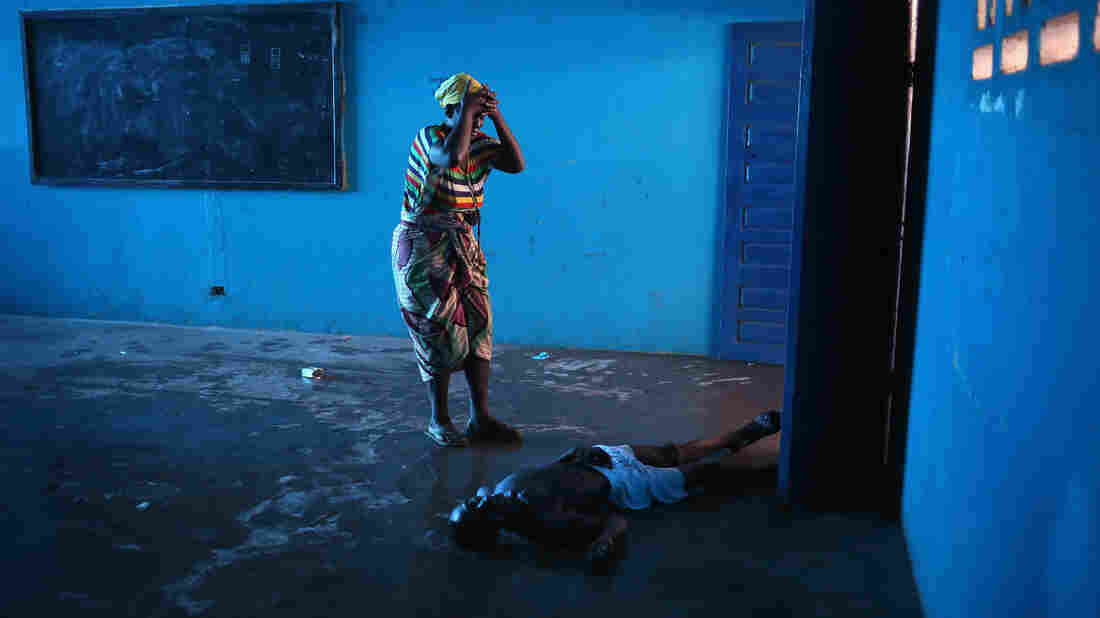 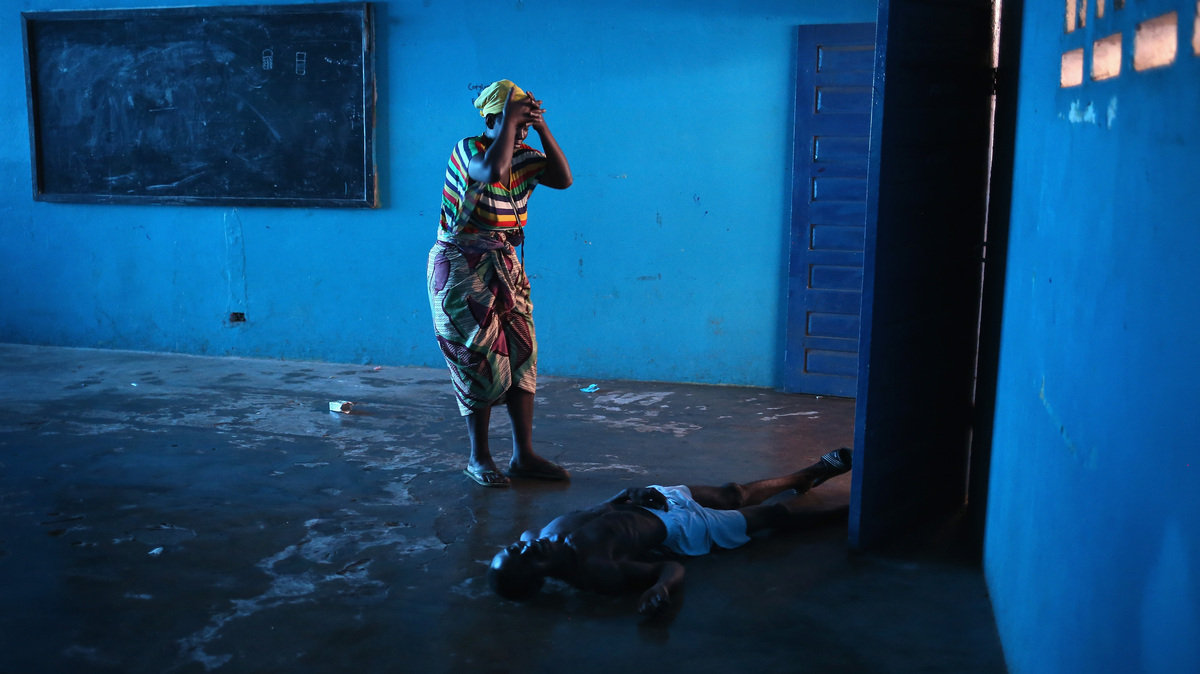 Umu Fambulle stands over her husband, Ibrahim, who'd fallen and knocked himself unconscious in an Ebola ward in Monrovia, Liberia.

In the West Point slum of Monrovia, Liberia, at a holding center for those suspected of but not yet confirmed as having Ebola, photojournalist John Moore witnessed a man stagger, fall and hit his head on the floor. The man's wife was with him, but because of the highly contagious nature of the Ebola virus she could not reach down to embrace him, even touch him, without risking infection herself. She was left helpless, unable to do anything but stand over him. "It was especially hard on the eyes to see," Moore says.

Similar scenes play out with cruel regularity in West Africa as family members caring for loved ones suffering from Ebola weigh self-preservation against the basic human desire to touch and hold a loved one in mutual comfort and compassion. The Ebola virus is spread through contact with the blood, sweat, and other bodily fluids of those already ill from the disease. That makes the direct, hands-on contact we equate with tender loving care highly risky. In addition, because touching the body of someone who has died of Ebola can also transmit the disease, various traditional Liberian burial customs (which include washing and laying hands on the body) have had to be curtailed, which has led to further emotional anguish. 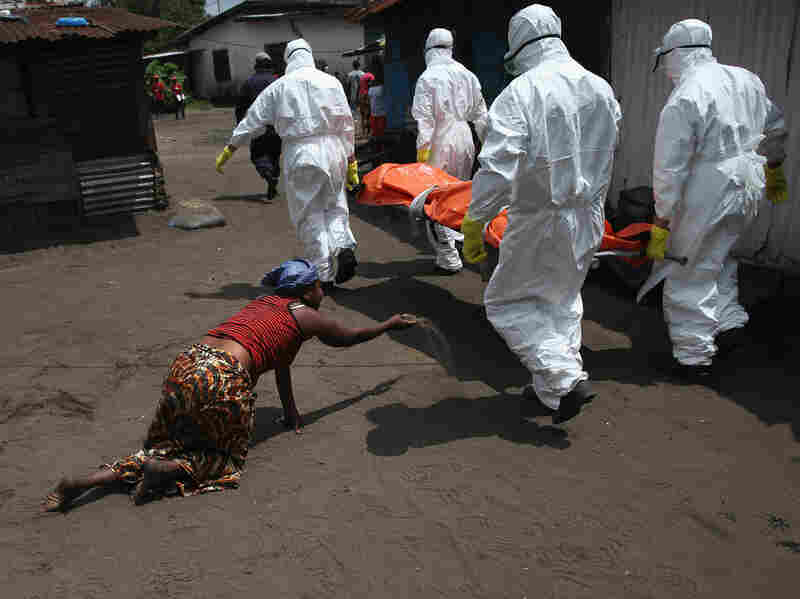 As an Ebola burial team takes Mekie Nagbe, 28, for cremation, her sister throws a handful of soil toward the body — a parting gesture. John Moore/Getty Images hide caption 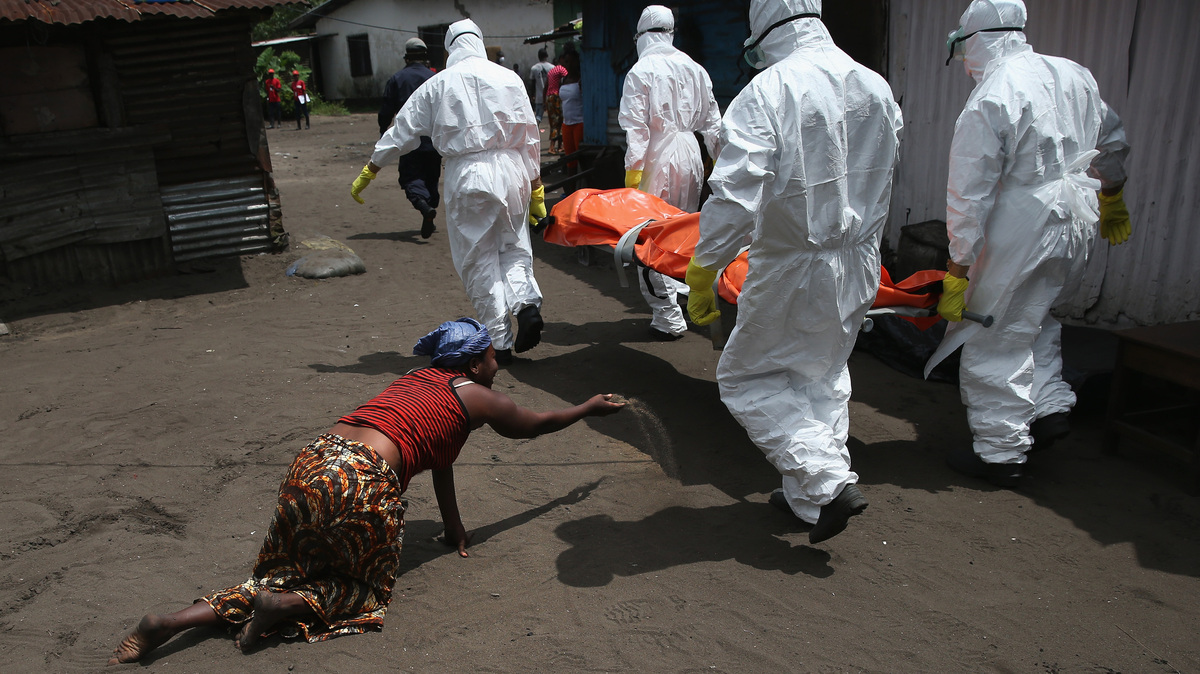 As an Ebola burial team takes Mekie Nagbe, 28, for cremation, her sister throws a handful of soil toward the body — a parting gesture.

One of Moore's most visceral photographs depicts a woman crawling on the ground toward her dead sister as members of a Red Cross burial team, clad in white protective suits, carry her away on a stretcher. The surviving sister is seen, in a wrenching gesture of farewell, trying to throw dirt onto the covered body as it passes by. "She just collapsed on the ground" afterward, Moore says. "It was devastating."

And no wonder. The inability to reach out and touch loved ones in situations that would naturally demand physical connection is part of the ravage of Ebola, says Cynda Rushton, Bunting Professor of Clinical Ethics at the Johns Hopkins Berman Institute of Bioethics and the School of Nursing. "People are left with witnessing the suffering, and there is a profound sense of helplessness. It threatens people's sense of integrity: How can I be a good parent or wife or son or husband if I cannot express my love in this very fundamental way?"

Extensive research across many disciplines has proven that humans require touch to thrive at every stage of life, starting in infancy. Tiffany Field, director of the Touch Research Institute at the University of Miami School of Medicine , explains that there are physiological reasons for the positive impact of touch. Touching stimulates pressure receptors under the skin, causing a long chain reaction that slows the release of the stress hormone cortisol. That's significant because cortisol kills the immune system's natural killer cells. In this way, touching not only helps calm the sick and show love and care, it also helps keep the immune system active. Field has shown improved immune responses to touch and massage in studies of premature babies, patients with breast cancer, adolescents with HIV and others.

And in the same way that touch calms the patient, through the same physiological mechanism of stress reduction and relaxation it can also soothe those doing the touching.

In Western countries, however, where Ebola has remained largely absent, we can only glean some sense of the impact of touch deprivation through the treatment of some cancers and other diseases that require patients to remain in isolation, separated from their loved ones.

Dr. Junzo Chino, a radiation oncologist at Duke University Medical Center, recalls that in the past cancer patients undergoing brachytherapy — which involves the implanting of a small amount of low-dose radiation in or near the tumor — were isolated for the two to four days of treatment, in lead-lined hospital rooms. Contact with medical and nursing personnel was limited; no visitors were allowed. "The isolation was a big challenge for many patients, especially the elderly," he says. Older individuals could become disoriented.

These days, because the treatment involves only temporary implants twice a day, for about 10 to 15 minutes each time, patients need to be isolated only during those brief periods. Otherwise, all contact can be normal. "People tolerate this a lot better than before, and I've seen a lot fewer issues with disorientation," Chino says. The physical discomforts from the treatment remain, but "the psychic stresses are much reduced" for both patients and loved ones.

In the case of Ebola, however, patients fighting for their lives can be incapable of any interaction, leaving touch as seemingly the last way to communicate love and care. "Everyone relies on a network of family and friends whenever they go through a stressful situation, and obviously illness is one of the most stressful," Chino points out. With the stringent dangers of touch posed by Ebola, "we're asking people to overturn all of their instincts because of the risk."

Yet even without touch there are ways family members can express those feelings, including just being there. "Even when they are at their lowest point, fighting for survival, patients can still sense the presence of loved ones," says Dr. Isidore L. Berenbaum, a psychiatrist at Boston Medical Center and assistant professor of psychiatry, Boston University School of Medicine. "The patient is well aware of that glance, that look, that voice," he says, "The patient feels safe, and that is the key thing." And when they recover, they will remember that.