Accessibility links
Holy Goats! They're Kind Of A Big Deal In One Nepali Town : Goats and Soda The people of Nepal like goat dishes. They like goat sacrifices. But not all local goats meet such a fate. In one town, goats do as they please. After all, they're divine! 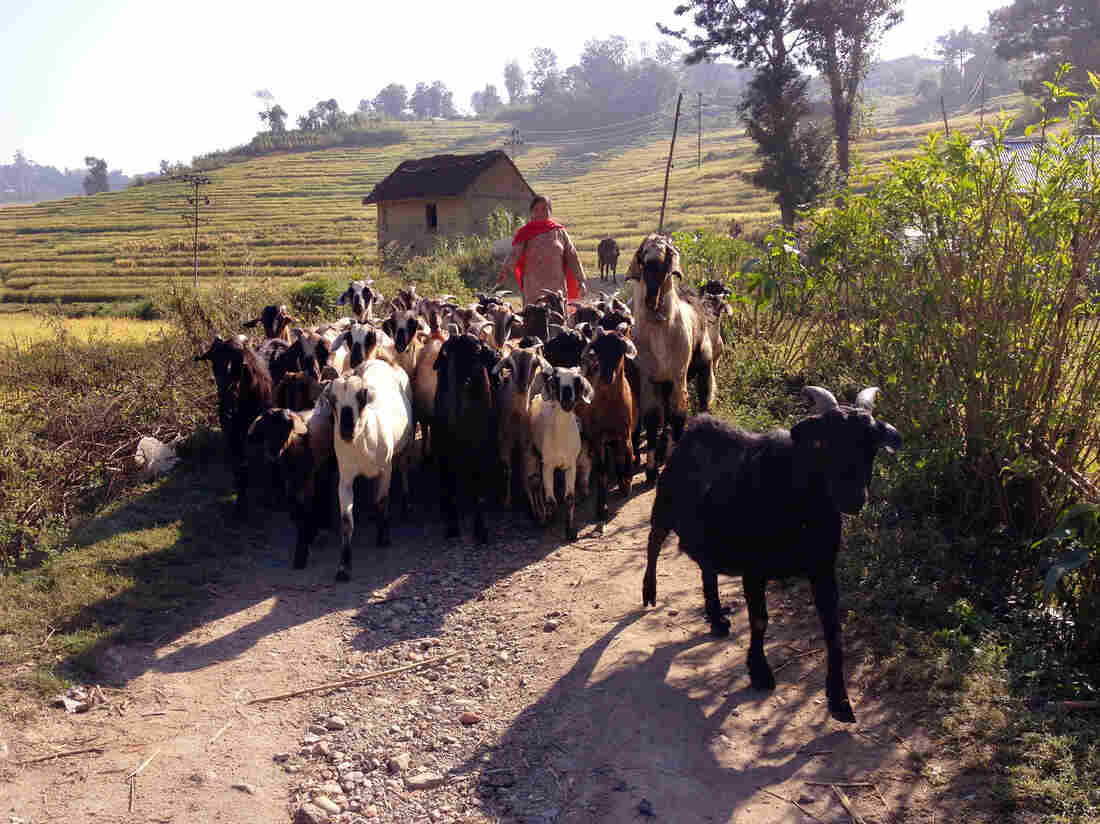 Nepal's sacred goats are escorted to a field to grab a bite. Luckily for them, they will never become a bite. Donatella Lorch hide caption 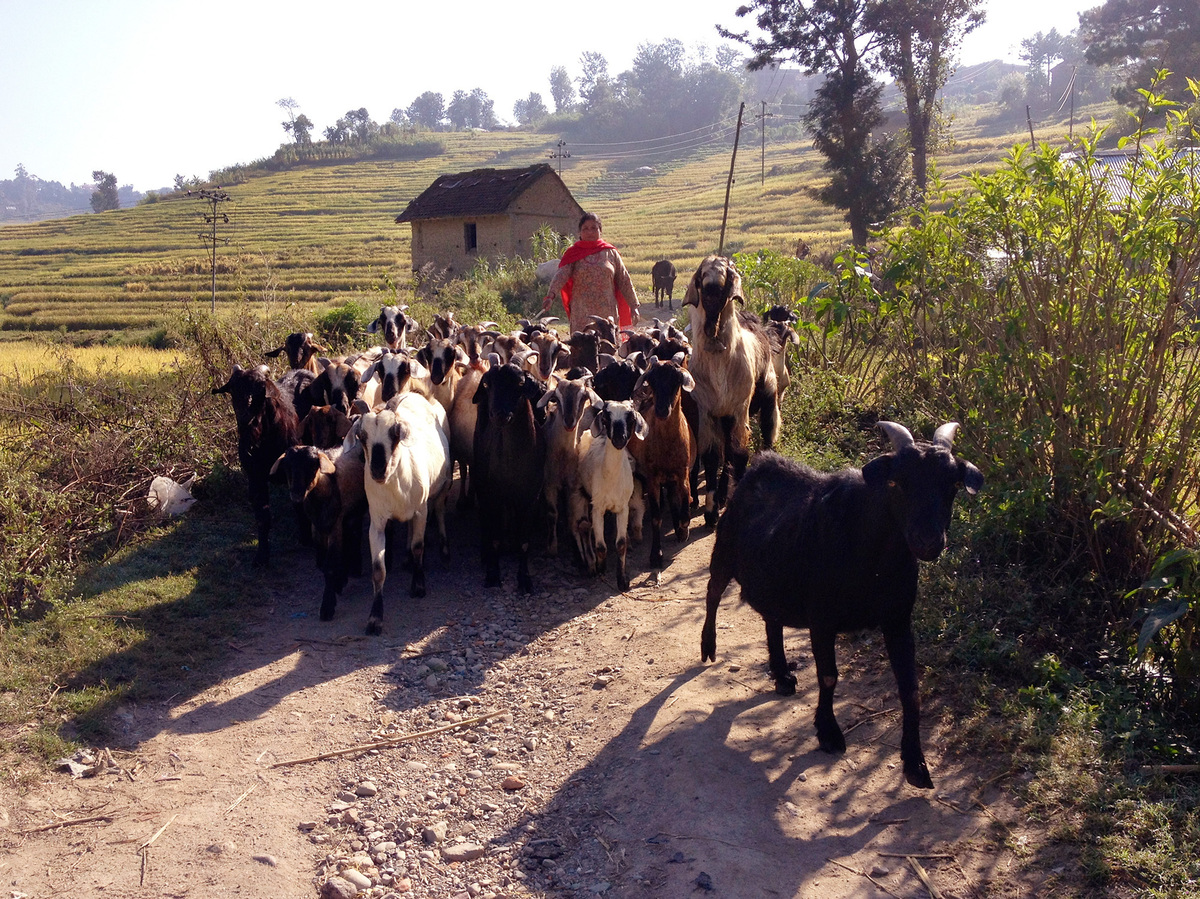 Nepal's sacred goats are escorted to a field to grab a bite. Luckily for them, they will never become a bite.

Like a weather vane pointing east, a goat stands motionless on top of a Buddhist temple. Others slumber interlaced on its main pedestal. And one or two nibble orange flower petals a devotee left as an offering on the lap of a stone Ganesh. Without hesitation, they walk into shops and grab munchies like bread or chips, help themselves to street sellers' vegetables and just plop down in the middle of the red brick street, unimpressed with passing motorbikes that swerve to avoid them. 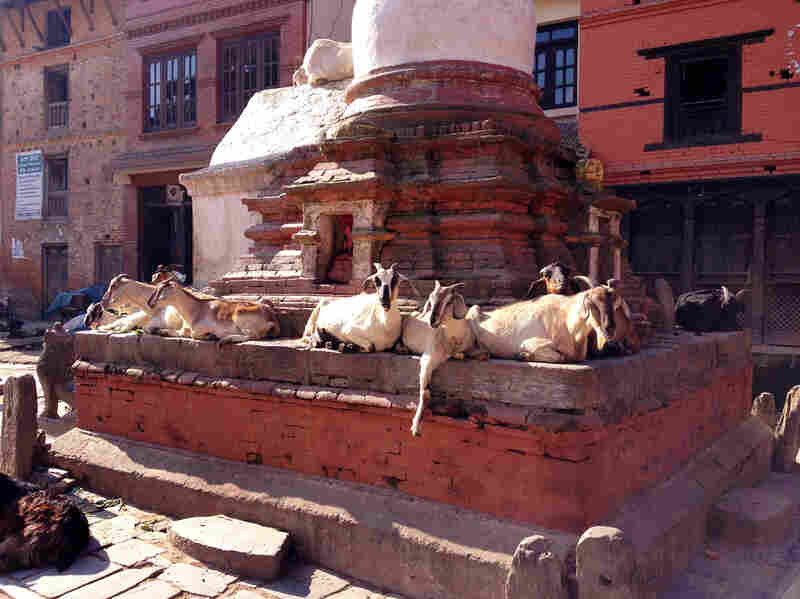 For a drowsy divine goat, where better to nap than on the pedestal of a Buddhist temple. Donatella Lorch hide caption 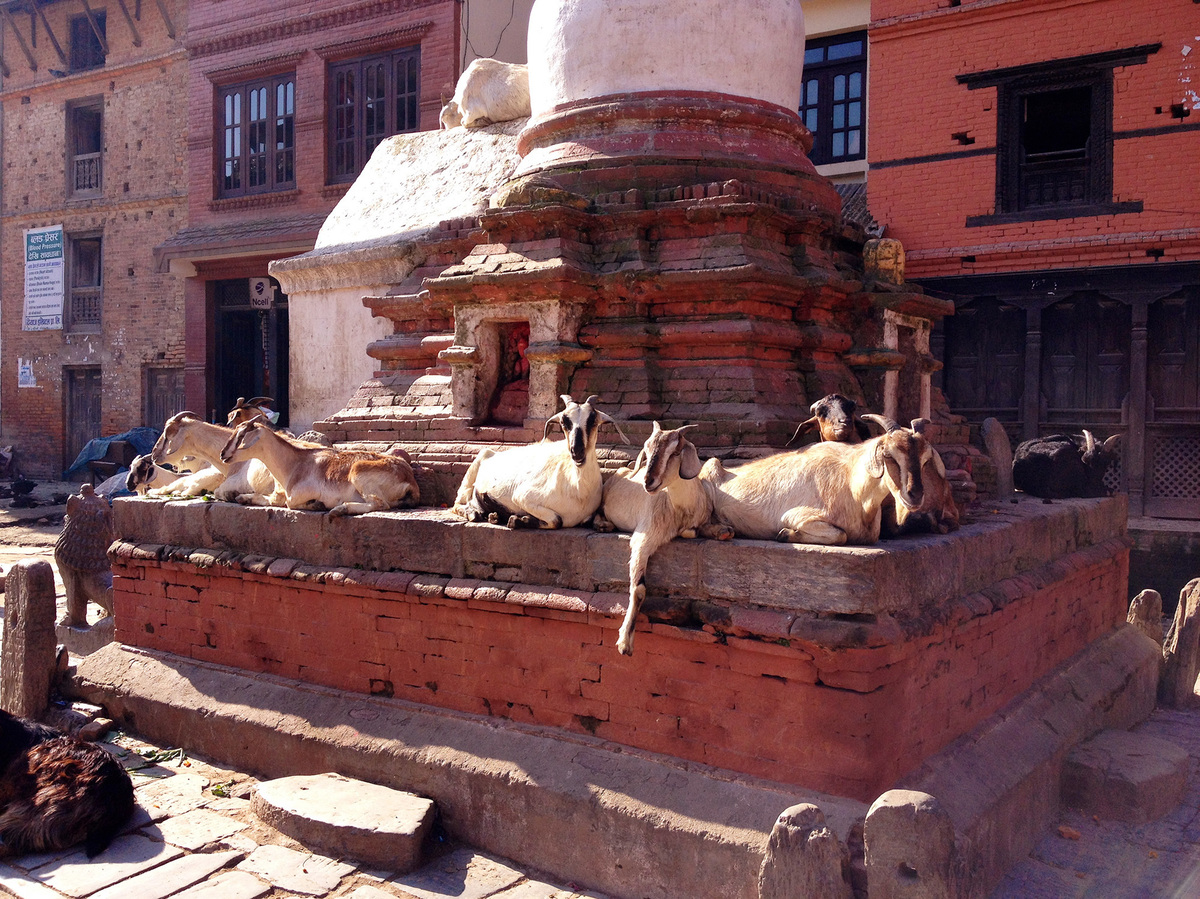 For a drowsy divine goat, where better to nap than on the pedestal of a Buddhist temple.

All these goats, as many as 80, live in the main square and nearby alleyways of Khokana, a small town on the southern edge of the Katmandu Valley, about eight and a half miles from downtown Katmandu. They are sacred goats living a vastly different life from their neighbors in nearby towns and in Katmandu, where the animals can often be spotted in the morning tied to posts near an open-air butcher shop, patiently awaiting their fate.

These sacred goats are a sign of fast-disappearing traditions that are being gradually snuffed out by the encroaching and haphazard mega-urbanization of Nepal's capital.

Khokana's 1,000 or so inhabitants are members of the Newar population of Nepal. They're the valley's original inhabitants and live in one of the area's oldest towns. Nestled on a prow-like ridge that juts out toward the meandering Bagmati River above an amphitheater of emerald rice fields, Khokana has managed to remain a farming town. Women wash, card wool, weave and dry their rice on stoops that line narrow stone lanes. Garlic and red chili tresses hang from windows and ground floors still house water buffaloes.

Newars practice a combination of Hinduism and Buddhism that was forged centuries ago. To them, the goats are holy.

"We believe God looks after them," explains Ram Maharjan, 46, a member of the Newar farmer caste who is a "Dev Parivar" — that is, a "child of God." The title is passed from father to son for generations, identifying those who look after the temples and perform animal sacrifices during festivals. "[The goats] can eat anything they want. They can go to the fields and no one can stop them. If someone touches them with bad intent, maybe that person will die."

According to the Newars, the goats belong to the goddess Rudrayani, an incarnation of the Hindu goddess Durga, whose three-story temple, with its sweeping roof corners, sits in the town center adjacent to a Buddhist stupa. 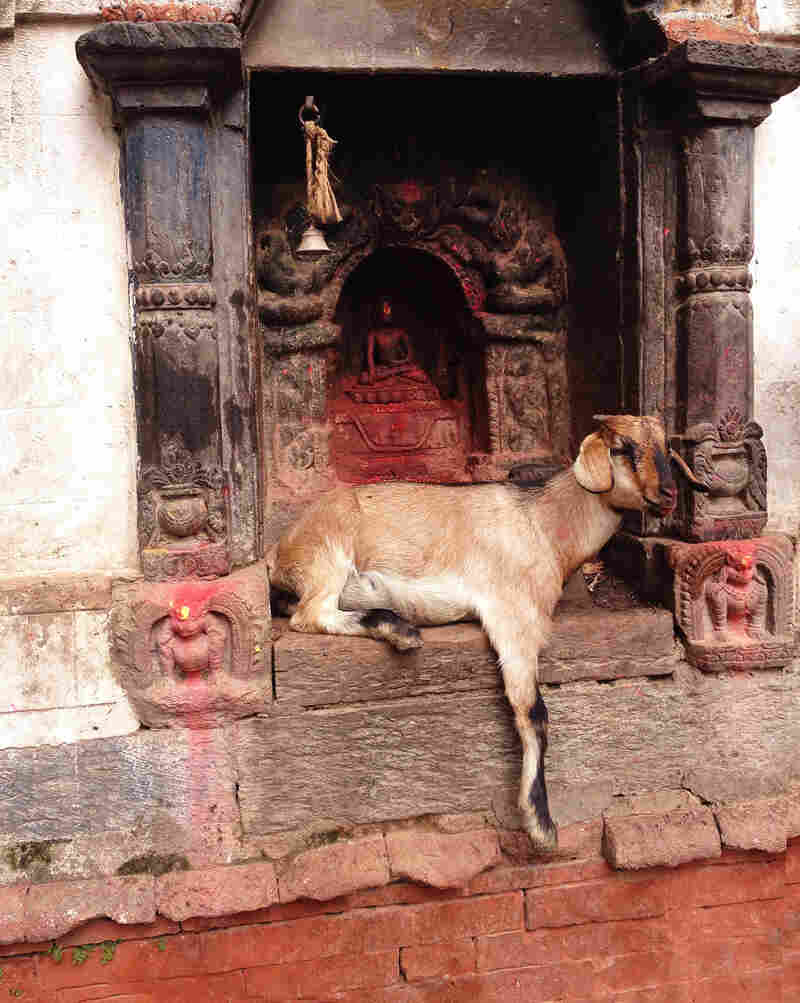 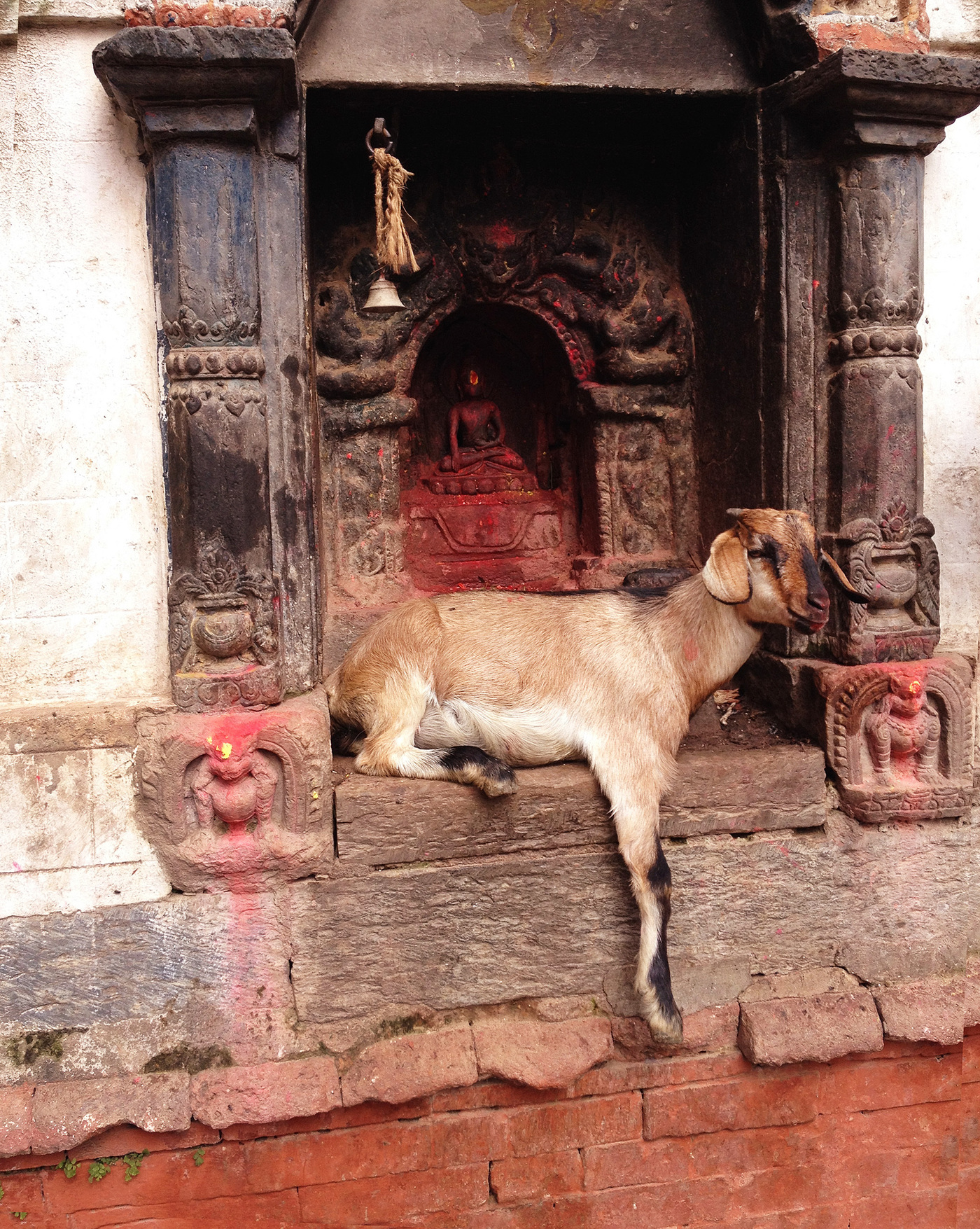 Anywhere a goat wants to hang its hoofs is home.

Maharjan, who as a Dev Parivar wears his black hair long and tied in a tight bun at the back, says that for the goats there is a holiness hierarchy. The females are deemed descendants of the first sacred goats and cannot be sacrificed. Males aren't quite as lucky. They can be sacrificed during festivals and then eaten.

Families also may donate new goats to the temple with wish lists that range from success in school exams to curing diseases.

The sacred goats once had more sway. Some Newars remember herds around the temples in central Katmandu in the 1960s. As recently as 2008, goats and sheep lived around the temples in the nearby city of Patan. But as the cities grew, the ties of religion and rituals weakened. Now those urban goats are long gone, kidnapped and eaten by thieves.

Khokana has weathered its own storms. During the decade of a Maoist civil war, it was a Maoist stronghold. Chairman Mao's stenciled profile still graces many walls. Yet the inhabitants did not appear to let Communism hinder their religious practices.

The 21st century may change that. Real estate speculators are buying up Khokana's rice fields to build gated communities for Katmandu's growing middle class – the gates are for safety, so kids can play inside and cars won't run over them. And the city itself is less than half a mile away. Maharjan worries about the future of the Dev Parivars and whether his sons will want to inherit his job. One of his sons is a migrant cook in Malaysia, the other a stone sculptor of religious statues.

Yet the goats don't seem worried. Their world stretches from lazy mornings lying on top of the stupa to afternoon walkabouts in the fields. For them, it's a goat's life.