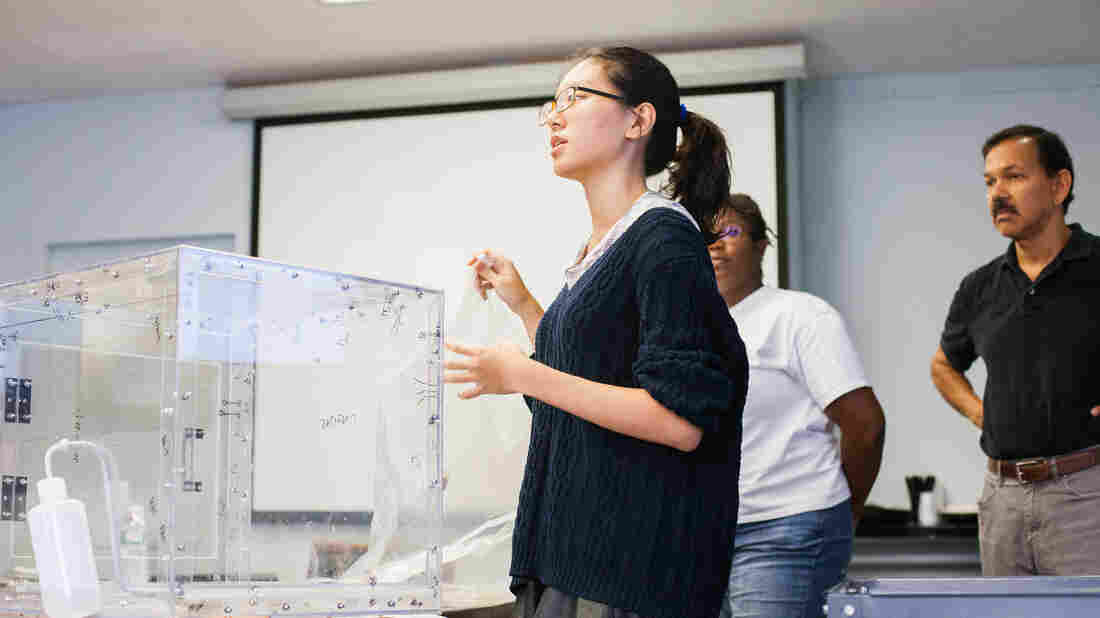 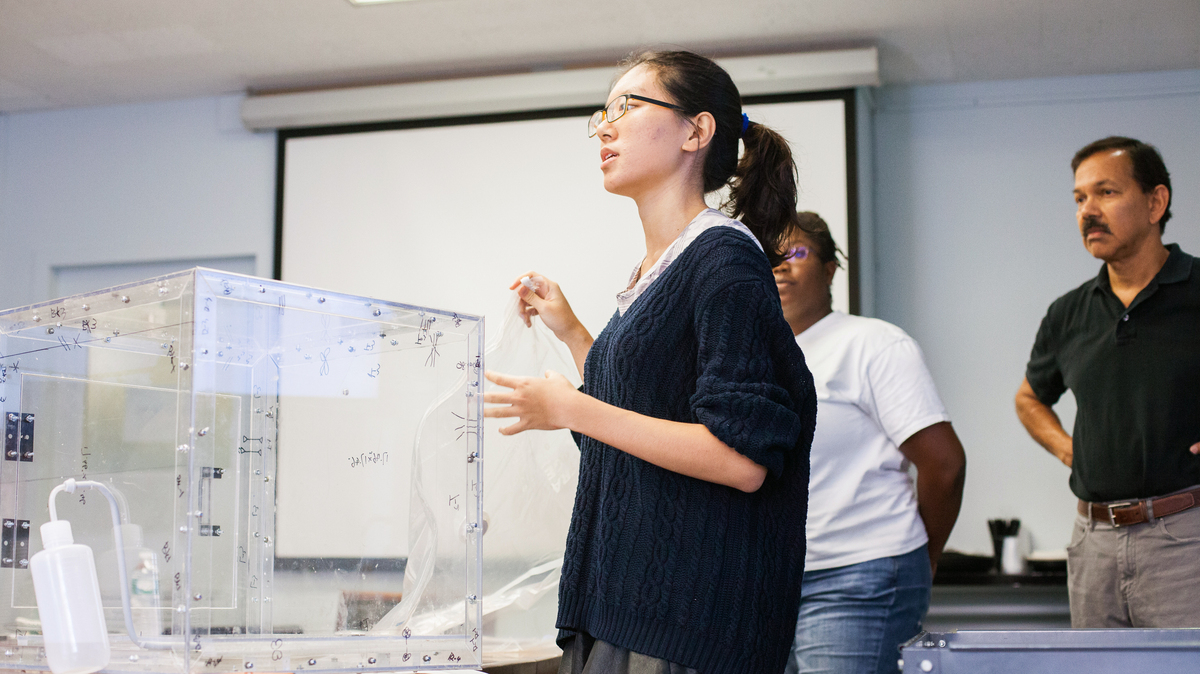 Students taking part in Columbia University's Ebola design challenge demonstrated for judges how to use a special chamber for decontaminating small items.

If there's one thing college kids do best, it's thinking creatively. Often operating with limited resources and tight deadlines, they're used to coming up with ingenious solutions to life's everyday problems (usually on little sleep). So it's no surprise that experts are turning to students for help in battling one of this year's most pressing global health issues: the Ebola outbreak.

The U.S. Agency for International Development announced a $5 million Grand Challenge in October, signaling the urgency to develop better protective gear for health workers in West Africa. Recognizing that grads and undergrads are in the perfect position to come up with clever ideas, some of America's most prominent universities have organized their own design challenges and emergency hackathons to get students' brains churning.

Challenge accepted. Working between classes and into the night — even on Halloween — students have been hacking Ebola from every angle.

Take, for example, how to improve the appearance of an Ebola protective suit. You might think aesthetics is the last thing innovators should worry about, but consider this: "For people in West Africa, when they look at somebody in full [protective] gear, it is pretty scary," says Dr. Harshad Sanghvi, vice president of innovations at Jhpiego, a global health nonprofit affiliated with Johns Hopkins University. "That's one of the reasons that people are afraid to come to the treatment centers."

Sanghvi helped organize a weekend hackathon two weeks ago at Hopkins in Baltimore, where a team of engineering students and textile experts are working on making the gowns look friendlier. Something as simple as adding name tags to the suits and developing a face protector that shows more of the face — to increase eye contact — can make a difference, he says.

At Columbia University, whose engineering and public health schools launched a two-week design challenge in early October, a team is tackling the same problem with a variety of colorfully patterned aprons that can be worn over anti-Ebola suits. Team member and engineering student Ramya Ahuja told the university's student newspaper that they studied traditional West African patterns to make their designs culturally appropriate. 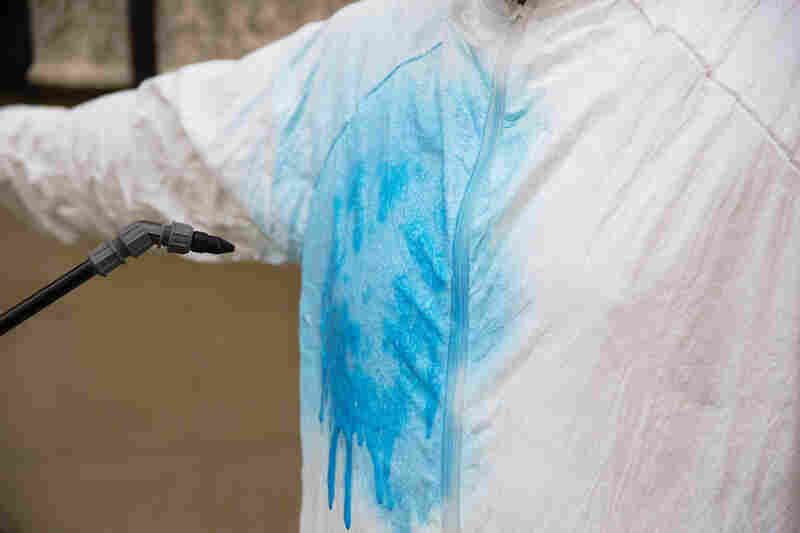 Students at Columbia University devised a spray bleach solution that first shows up as blue, then turns clear, so health workers can easily make sure they've disinfected everything. Courtesy of Columbia Engineering hide caption 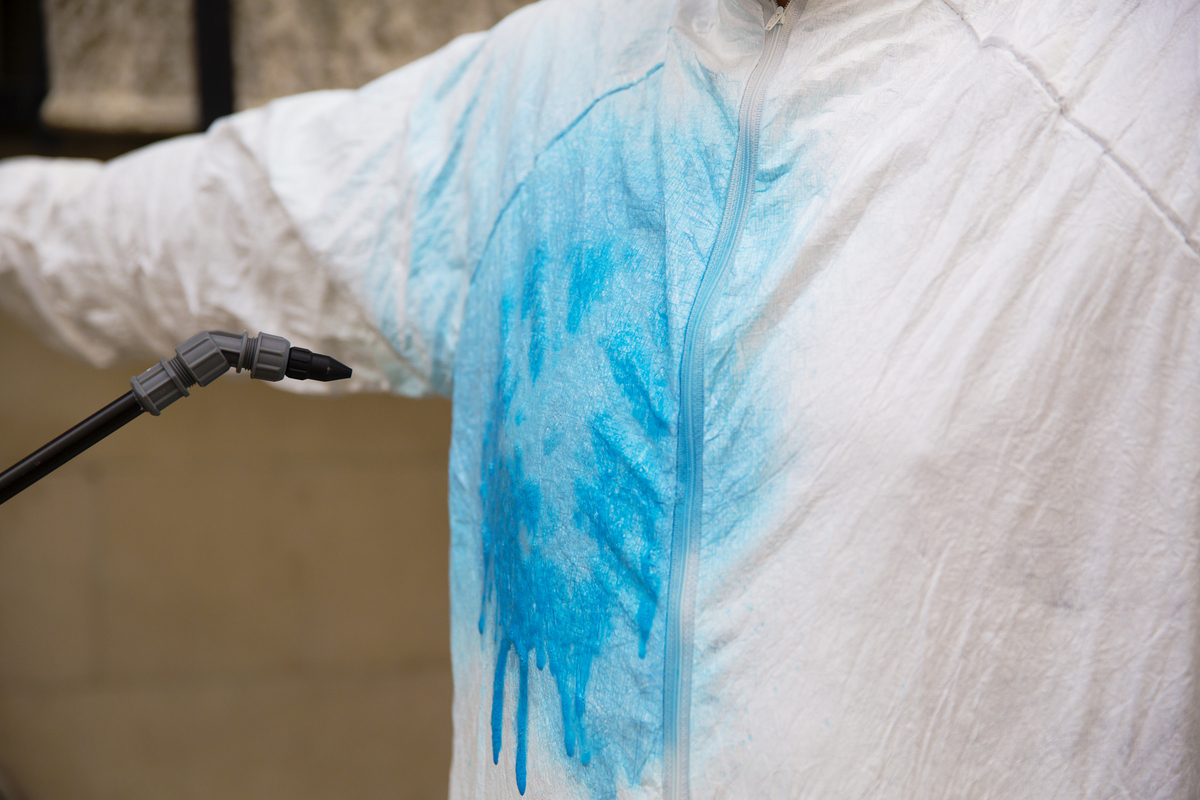 Students at Columbia University devised a spray bleach solution that first shows up as blue, then turns clear, so health workers can easily make sure they've disinfected everything.

Another Columbia group thought of using color-changing bleach to help health workers confirm that they've fully disinfected every part of their suits. Still another developed a lightweight cot that workers can use as a stretcher to transport patients and can double as a bed.

"[Students] think practical, and they think outside the box," says Dr. Wafaa El-Sadr, an epidemiologist at Columbia's Mailman School of Public Health and one of the challenge's organizers. Students, she notes, aren't "encumbered by knowing the limitations."

While students don't have all the answers, they make up for it with "unbounded enthusiasm," says Aditya Brahmabhatt. A recent graduate of New York University's engineering school, the 24-year-old mechanical engineer organized an Ebola hackathon at his alma mater last weekend that drew about 35 professional coders, data scientists and students.

"They were really excited to be given a chance," Brahmabhatt says. "People are looking for ... these things where they can come and make a difference."

For a group of Kenyan students at Duke University, their ties to Africa were enough reason to get involved in their school's innovations challenge, which launched last week. "We recognize that this [Ebola outbreak] could happen in Kenya," says Dorothy Mangale, 27, a global health student. "So in the spirit of brotherhood or neighborliness, we decided that this was going to be an important issue for us."

Mangale's group includes global health, medical and computer science students. Together, they've come up with a mobile application with a "decision tree." The tree would help people figure out whether a person's symptoms warrant a visit to an Ebola clinic. It would also alert health workers to any suspected cases so they could send an ambulance as soon as possible.

For global health students learning about epidemics of the past, "It was hard for them to relate to what they were studying" in the classrooms, says Kyle Munn, the program coordinator for Duke's social entrepreneurship program who helped organized the university's Ebola event. "So this gave them an opportunity to apply their learning to a current, real-world challenge."

NYU's Brahmabhatt says he wants to see even more U.S. schools involved. "It's really sad to see that every university is not already doing this," he says. "Every university has computer scientists, data scientists, anthropologists and epidemiologists."

Coupled with the creative minds of passionate students, he says, this creates just the right balance of knowledge and skills for generating quick and innovative solutions. The most promising ideas resulting from the Ebola hackathons will either be entered into USAID's Grand Challenge or will be sent for field-testing and product development.

And those ideas don't necessarily have to come from a large event. Back in September at Emory University, one lecturer asked her introductory biology class to come up with a faster and cheaper way to test patients for Ebola. She intended for them to explain the science in an upcoming quiz for bonus points — but got a surprise when two students took her challenge to heart.

Freshmen Brian Goldstone and Rostam Zafari, both 18, came to her with an idea for cheap detection strips that can recognize the Ebola virus before the onset of symptoms. The duo, with the help of a few experts, created an Indiegogo campaign and raised more than $14,500 last month to put their strips to the test.