Accessibility links
From 'Big Jues' To 'Tay-Tay Water,' A Quick Guide To Liberian English : Goats and Soda An NPR reporter found that Liberian English is ... kind of like English and kind of like nothing you've heard before. Just stick an "o" at the end of a phrase if you're happy, and you're on your way.

From 'Big Jues' To 'Tay-Tay Water,' A Quick Guide To Liberian English

From 'Big Jues' To 'Tay-Tay Water,' A Quick Guide To Liberian English 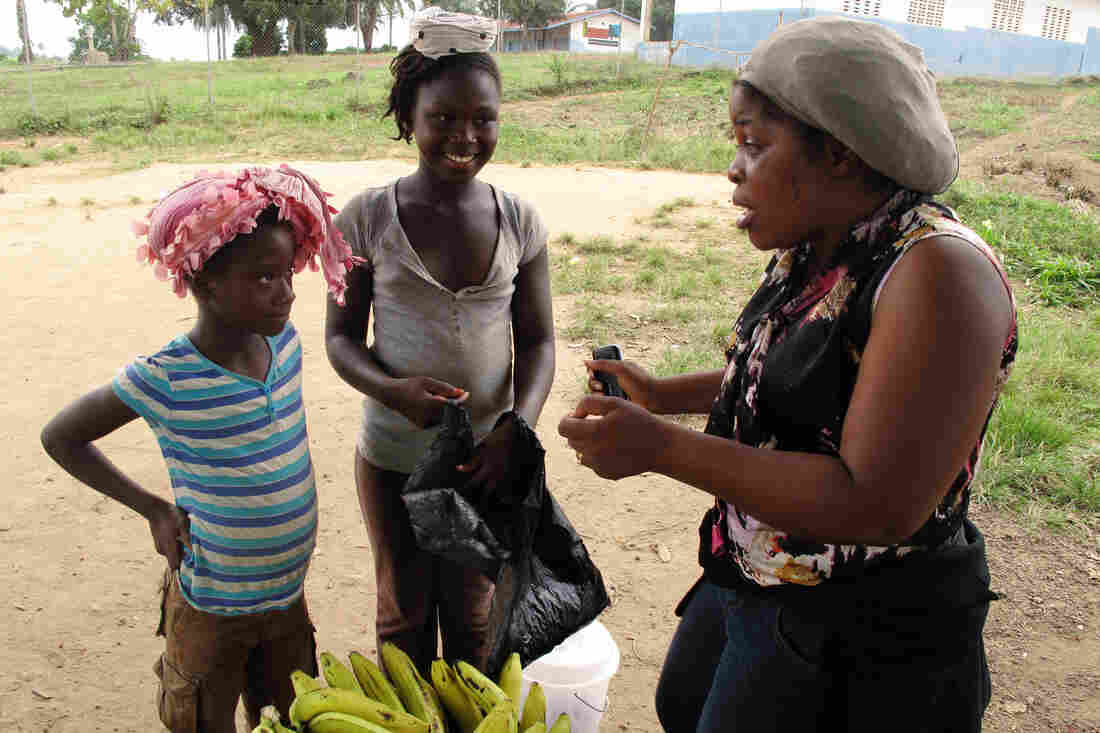 Siatta Scott Johnson (at right), who has guided NPR journalists through Liberia and its lingo, advises two girls on how best to carry bananas and bread. Michaeleen Doucleff/NPR hide caption 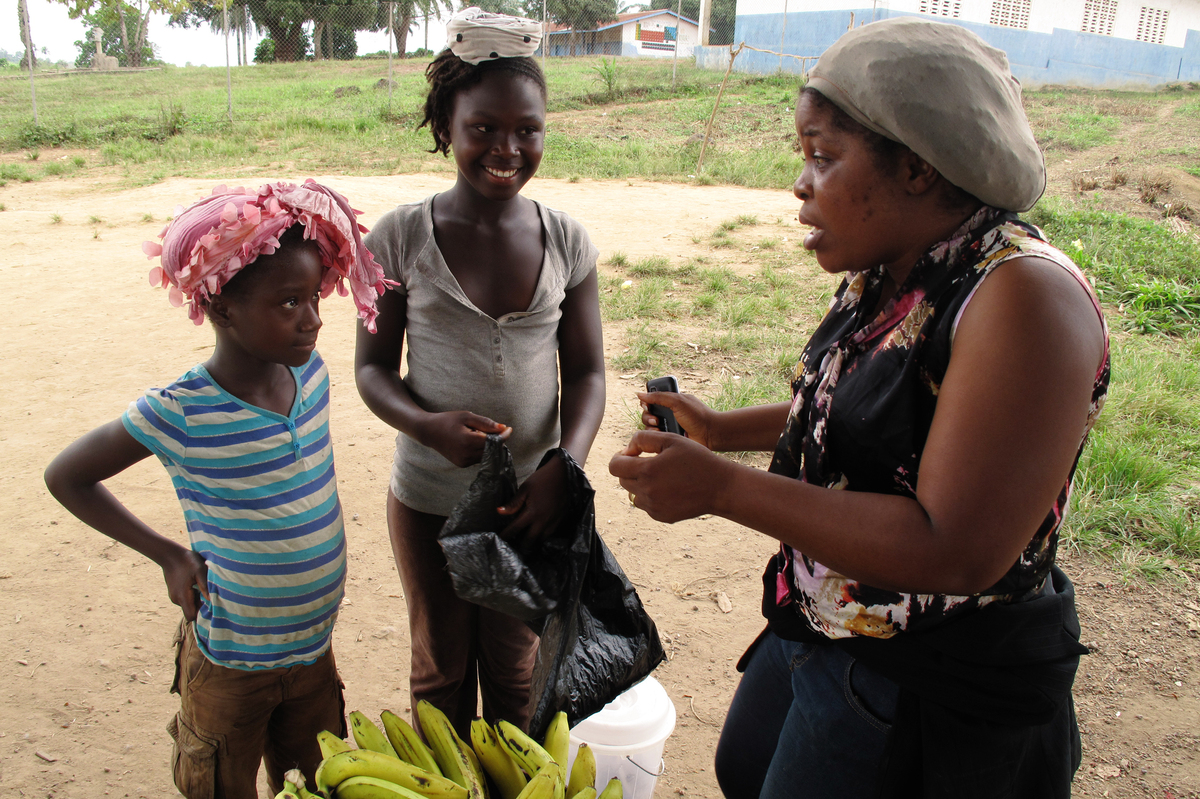 Siatta Scott Johnson (at right), who has guided NPR journalists through Liberia and its lingo, advises two girls on how best to carry bananas and bread.

At church on Sunday, women wouldn't dare wear a dress bought off the shelf. Instead, they carefully select fabrics with vibrant patterns and then have tailors sew impeccably fitted frocks.

Liberian conversations are no different: They're filled with flair and aplomb.

Liberia was founded in the early 19th century by freed slaves from America. "People assume they brought English to Liberia," says linguist John Singler of New York University. "But in fact, English was already there — the West African variety, pidgin English."

At first, this version of English was spoken mostly along Liberia's coast, among traders, Singler says. Elsewhere, people spoke their own tribal languages. Liberia has at least 16 (and perhaps as many as two-dozen or so, depending on where you draw the language line, Singler says).

During the country's 14-year civil war, which ended a decade ago, people around Liberia were displaced. "To communicate with each other, they had to speak a common language," Singler says. "So the war promoted English across Liberia."

The result is a mixture of early pidgin English with a lot of influences from African-Americans and standard English, Singler says. Plus, there are a bunch of pronunciation tweaks that come from the tribal languages.

Mix all that up into a linguistic stew, and the result is a version of English that's very hard for Americans to understand.

But that didn't deter me. Eager to learn a bit of Liberian English while reporting there last month, I asked our translator, Siatta Scott Johnson, to teach us a few words and rules.

Let's take a look at some unique vocab:

Shikii (pronounced "shee-ghee"): A man who dresses in high fashion and acts like the boss. Shikiis want the whole world to believe they have money — even if they don't, Scott Johnson says: "Maybe they used their last penny to buy that gold chain or sunglasses. Sometimes they borrow clothes to look rich. Liberians like to bluff."

Big Jue: An independent, strong woman. Sometimes she's married, sometimes not. But no matter what, a big jue doesn't depend on a man for her livelihood, Scott Johnson says. "She's in charge. A big jue doesn't let others tell her what to do." (Note: The term doesn't have anything to do with Judaism. It became popular after Liberia's civil war, Scott Johnson says: "During the crisis, a few women still had money. They were untouchable and somehow attached to the powers that be. They were the big jues.")

Tay-Tay Water (literal translation: "titty water"): This doesn't need much explanation: It's breast milk. "Everyone understands when you say tay-tay water," Scott Johnson says. "People don't refer to this as your breast," she says touching her chest. "Most people refer to it as tay-tay." It's not considered vulgar.

Pem-Pem: A motorcycle. "It comes from how the [motor]bikes sound," Scott Johnson says. "Pem-pem, pem-pem. ... In Uganda, motorcycles are called 'border-border' because they go from border to border without getting stuck in traffic."

Small-Small: Little by little or step by step. For instance, "Liberia is stopping Ebola small-small." The opposite is quick-quick, Scott Johnson says, which means fast.

My Ne-mo (pronounced like the cartoon fish Nemo): This means, "Don't quote me," Scott Johnson says. It comes from the phrase "my name no." For instance, right before you start gossiping about someone at work, you might say, "My nem-o, but did you hear about ... "

Ya Hello-o: Hello to you all. This is a common way to greet people. It's friendly and warm.

Liberians tack extra sounds onto the end of phrases, like "o," "ya" or "menh." These sounds help convey the speaker's emotion.

And don't be shy about using them. Every conversation is filled to the brim with "o's" and "ya's." Here's how it works:

"O" or "ya" at the end of a phrase expresses friendliness or a good mood. For instance, a pleasant conversation would go something like:

But if someone is struggling or sad, then they would add "menh" on the end. Then the conversation would go:

"Menh" can also add a sense of frustration or disapproval. "It depends on the context," Scott Johnson says. " 'l'm going-menh' would be like, 'I've been here all day, and now it's time for me to leave.' 'Hello-menh' would mean I'm angry at the person arriving."

And what about the ubiquitous "Oh, my goodness" in American English? "Liberians say 'Eeh-menh!' " Scott Johnson says. "It's a phrase used to express a strong emotion."

"Liberian conversations can't happen without a 'menh' or 'o,' " she says. "You just tack it onto the end to every phrase. Now that's L-I-B [the Liberian expression for the country itself]!"