Accessibility links
Turning Weapons Into High-End Watches : Goats and Soda A high-end jewelry company recycles the components of assault rifles into watches, rings and other luxe jewelry items. Each sale then funds the destruction of weapons in Africa. 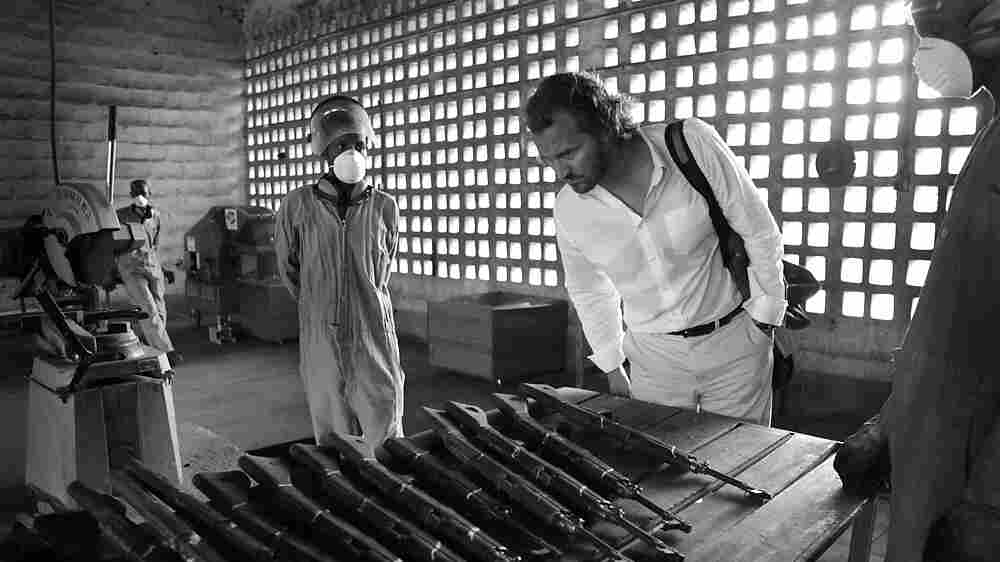 Peter Thum visited a military base in Rwanda where destruction of small arms took place in 2009. Moises Saman/Courtesy of Fonderie 47 hide caption 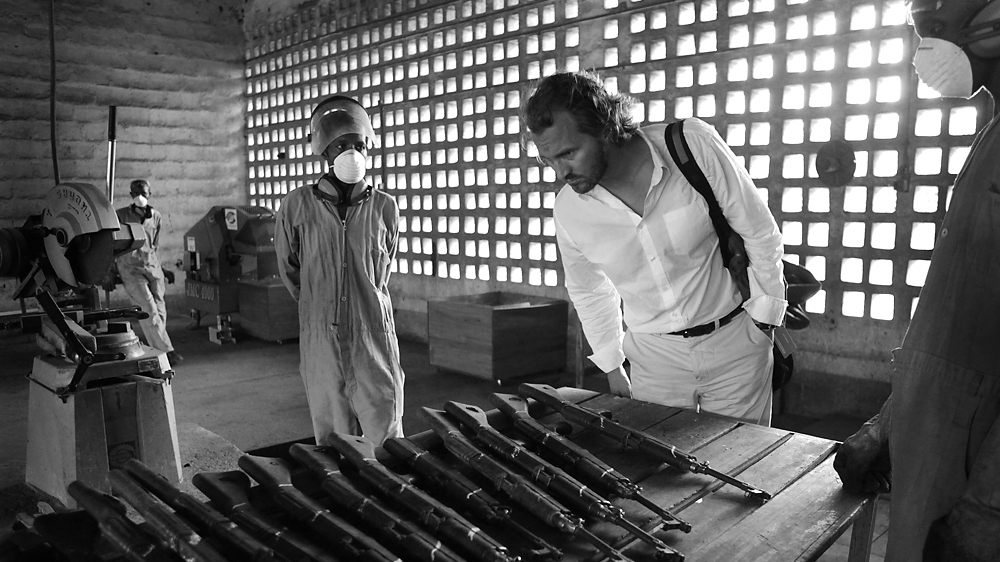 Peter Thum visited a military base in Rwanda where destruction of small arms took place in 2009. 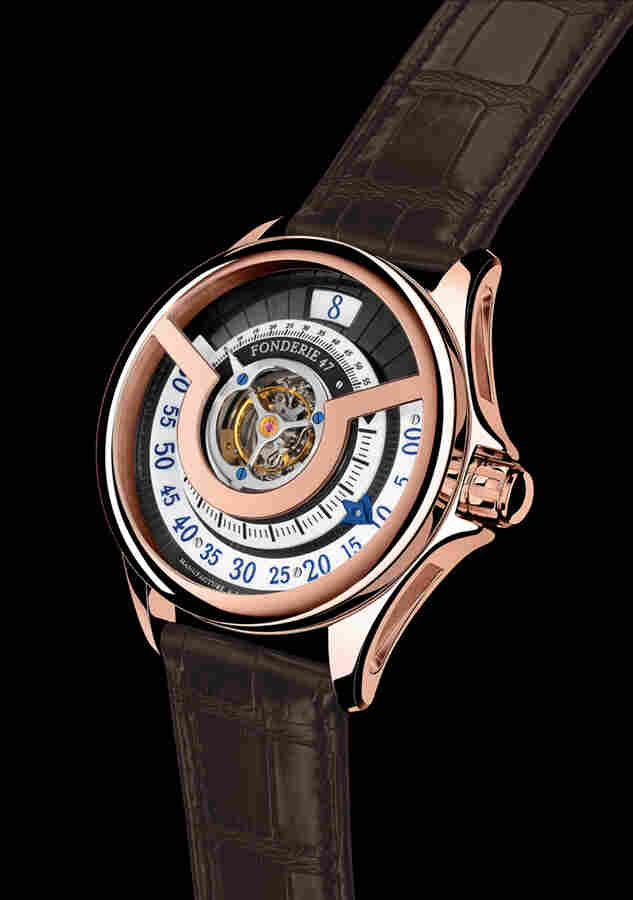 Fonderie 47's "Inversion Principle" watch includes a plate made from the steel of a destroyed assault weapon. Each sale funds the destruction of 1,000 assault weapons in Africa. Courtesy of Fonderie 47 hide caption 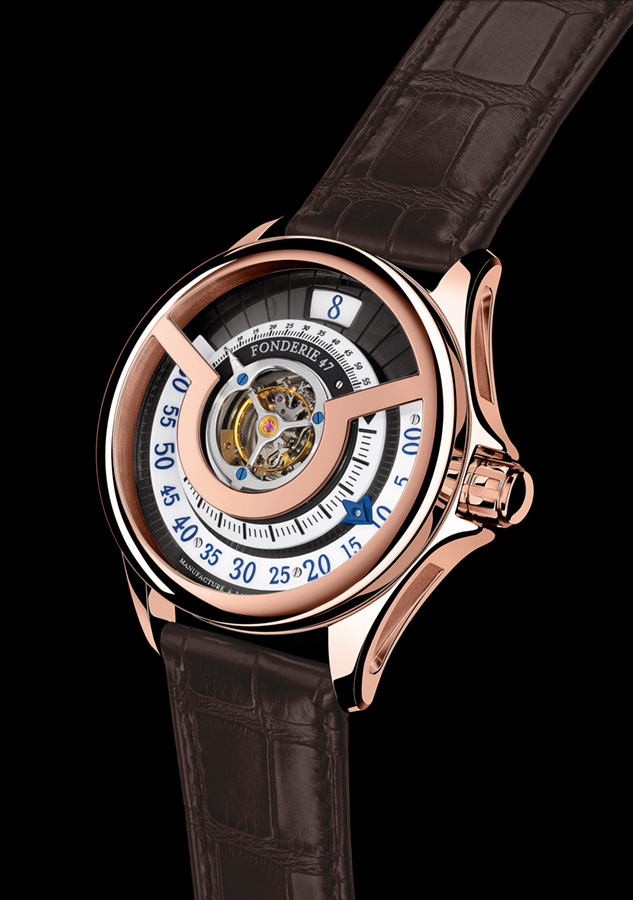 Fonderie 47's "Inversion Principle" watch includes a plate made from the steel of a destroyed assault weapon. Each sale funds the destruction of 1,000 assault weapons in Africa.

Here's a gift idea that's hard to top: a $195,000 watch, made partly from recycled components of assault rifles seized in Africa. Not only is it an attention-getting item, but it's also a chance to do good. Each purchase funds the destruction of 1,000 weapons in central Africa.

The man behind the watch is Peter Thum, a U.S. entrepreneur with the heart of a humanitarian. Thirteen years ago, the former McKinsey and Co. consultant created a premium bottled water brand, Ethos Water, that directed a percentage of profits toward clean water and sanitation projects in developing countries. Starbucks bought Ethos in 2005.

A few years later, as Thum was touring safe water projects in Kenya and Tanzania, he encountered a different danger: the proliferation of small weapons, especially AK-47 assault rifles, also known as Kalashnikovs. It's estimated that Africa is home to some 20 million small arms. The AK-47 is so popular that it's emblazoned on Mozambique's flag.

Disturbed by what he saw, Thum embarked on a new venture in 2009, co-founding a company called Fonderie 47 to make fine jewelry and watches. The timepieces, rings, earrings and other bijoux, created by designers including French-American jeweler James de Givenchy and Swiss watchmaker David Candaux, are partly made from the recycled components of AK-47s seized as part of disarmament efforts in Central Africa. Each sale then helps support efforts to rid Africa of guns by the Mines Advisory Group, which co-won the Nobel Peace Prize in 1997.

Thum spoke with Goats and Soda about his swords-to-ploughshares efforts.

What was the genesis of the idea for Fonderie 47?

I traveled in Kenya and Tanzania in 2008. It was the first time I'd come across kids and young men armed with rifles. They ranged in age from preteens to their early 20s.

It was unnerving to me. It led me to think of the question of arms across Africa and the implications for international development efforts: What can we do that's interesting and different to bring attention to the proliferation of assault weapons in Africa? 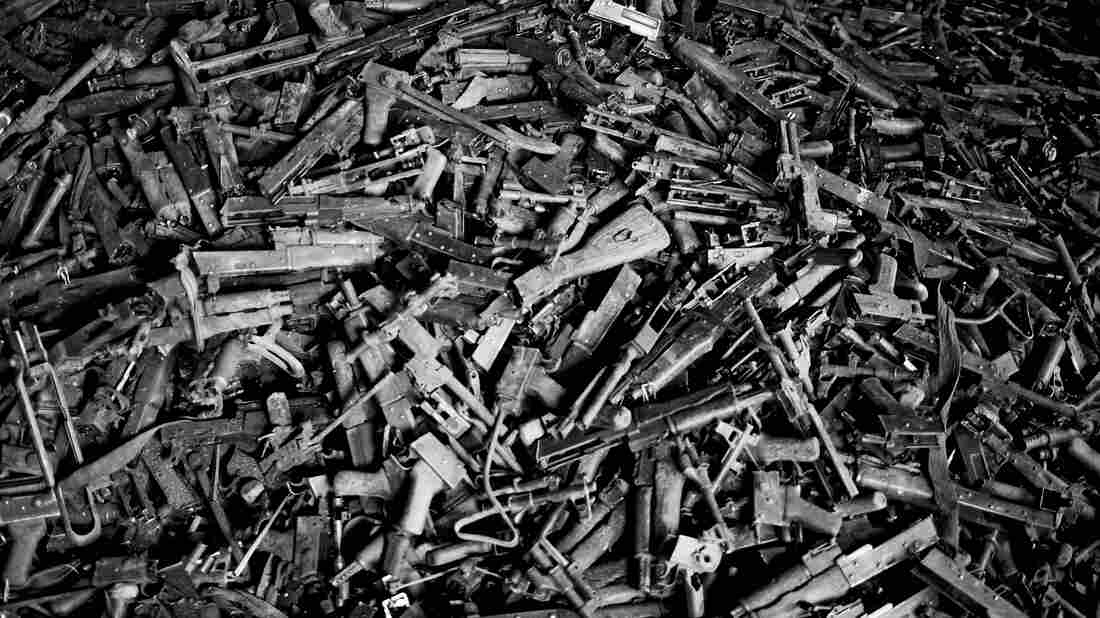 Weapons seized by authorities in the Democratic Republic of Congo awaited destruction at a workshop in the city of Bukavu in 2009. Moises Saman/Courtesy of Fonderie 47 hide caption 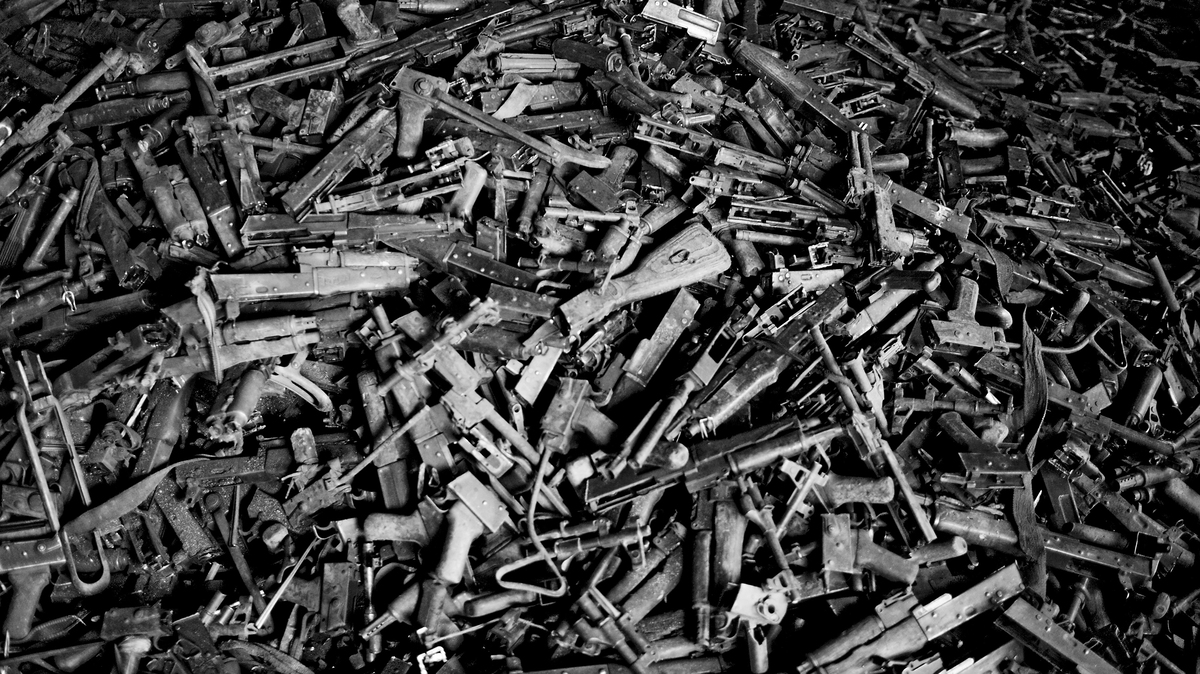 Weapons seized by authorities in the Democratic Republic of Congo awaited destruction at a workshop in the city of Bukavu in 2009.

Why watches and jewelry?

The crux of the idea is to take an AK-47 and transform it into something compelling and beautiful — and completely opposite of an AK-47 — and then use it to fund the destruction and removal of guns. We have provided funding for the destruction of those guns through our venture.

Getting a new AK-47 is very expensive for a local person. These weapons are like rusty old cockroaches. It is such a robust device. If they get old and are destroyed, we help create a vacuum.

The goal is to make an issue of the international arms trade, and the aftermath and what happens to people. This will help bring attention to it and not leave it as an issue only discussed by policy people.

So this is a very tangible action. It's not a peace conference. Let's take a device that makes people dead and get rid of it.

Tell me why the Congo region is particularly important for gun destruction.

All around [Africa's] Great Lakes, it's a region that's been embroiled in conflict for the last 20 years. It's a horrible human disaster. More than 5 million people have been murdered, and I don't think people understand what these numbers actually mean. We'll definitely continue working in that part of the world where the worst conflict in recent history is taking place.

What happens after a piece of your jewelry is purchased?

When someone buys something, we assign a specific number of guns to a piece. A pair of earrings might destroy 100 guns, and we send you the serial numbers that relate.

How many weapons have been destroyed as a result of Fonderie 47 watch and jewelry purchases?

Are the watches and jewelry made from certain parts of the guns?

We use metal from all of the different parts.

The AK-47 design was created by the Soviet Union for World War II, but the gun was not available till 1947. That's where the number 47 comes from. The design was given to other Allied countries; there was no intellectual property protection. Twenty countries produce the AK-47 with different materials, of different quality. We use metal from different guns, from different countries — Eastern Europe, the Mideast, Russia, China. The gun barrel tends to be the best steel — very consistent, very hard. It's where the bullet is delivered. It's very high quality.

Steel is very difficult to work with. Gold, silver and platinum are malleable. Steel is very hard and brittle. We had to invent processes to use it.

How did you originally get the gun parts to the watch and jewelry designers?

In my luggage. The black rollie bag. Eight guns' worth. We got them destroyed at a blacksmith outside Goma. After that, it was [technically] garbage and we were exporting chunks of steel.

It must have been heavy.

Very. I just checked our bags to the U.S. We had talked to Customs and explained what we were bringing back.

Do you wear a piece of jewelry or a watch made from one of the destroyed AK-47s?

I have a ring, a signet ring on my right-hand ring finger. It's 18-carat gold with a piece of an AK-47 plate in the center. There is bezel around the top with gold clamped down over the plate. A blacksmith fashioned it, and then it was blackened. The body of the ring is microplanished with tiny indentations so it looks multifaceted. Inside the ring is the serial number of the gun it was made from. I just really liked it.

Aside from encountering the boys and young men with guns in Kenya, have you had any personal experience of gun violence in your own life?

In college I had a really good friend. She was shot. She was a wonderful person. It's not necessarily directly connected to my reason for doing this. But I look back on that experience and I think maybe my experience is exemplary of what many people in the U.S. go through.

And you actually have started a new business, similar to Fonderie 47, to address the gun situation in the U.S., right?

Yes, it's called Liberty United. We had a June 2013 launch. Illegal gun material is released from evidence and we buy it back. We've created jewelry from $35 to $1,600. We take 20 to 25 percent of the profits and put it back into nonprofits to reduce gun violence and make young people safer.

But we're not funding gun destruction here. The idea in Africa is to create an economic gap. It doesn't work in the U.S. Guns are cheap here, like cellphones. That's why there are 300 million guns here.