Accessibility links
Liberians Meet Death With Flowers, Trumpets And Cameras : Goats and Soda To understand why Liberians have had a hard time changing their funeral practices in the age of Ebola, first you must understand their tender and celebratory traditions. 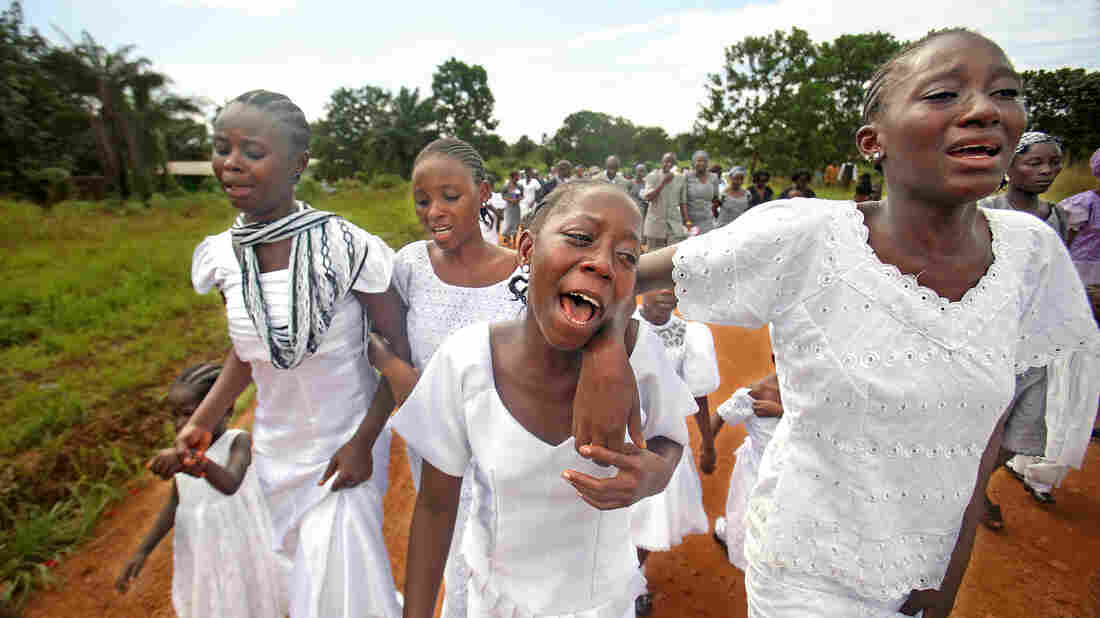 The grandchildren of Rebecca "Mama" Barclay walked 2 miles to her burial site in 2011. Gabriel B. Tait for NPR hide caption 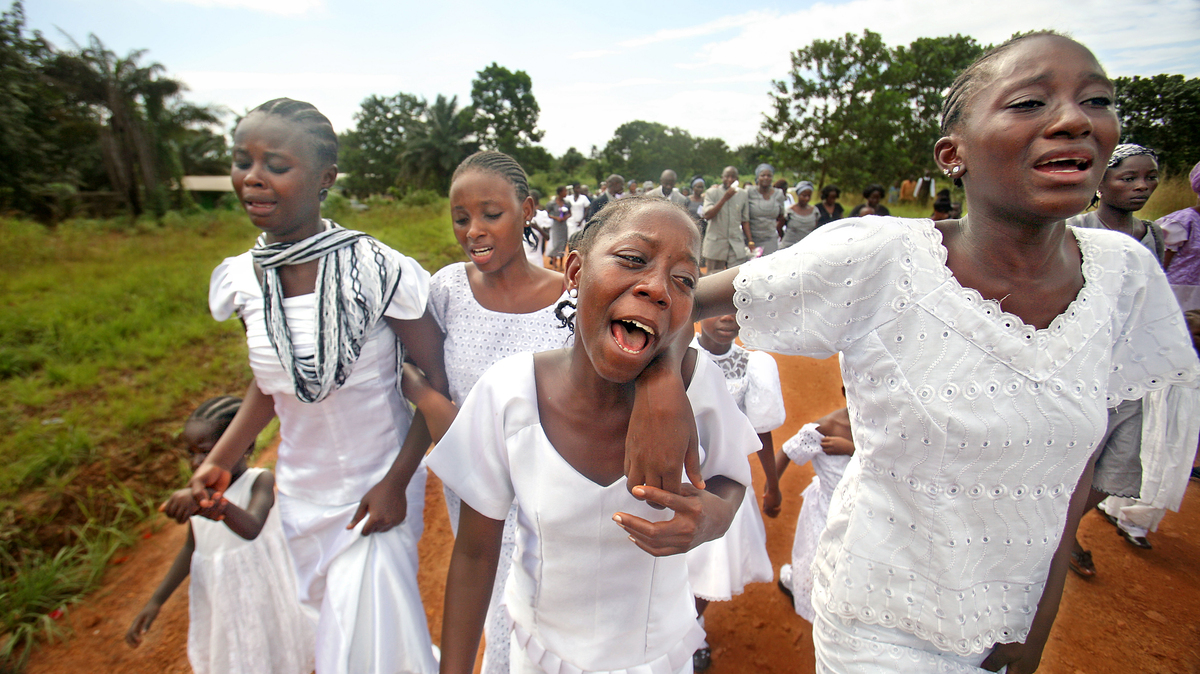 The grandchildren of Rebecca "Mama" Barclay walked 2 miles to her burial site in 2011.

Gabriel B. Tait for NPR

When Rebecca "Mama" Barclay died in the summer of 2011, hundreds gathered for her funeral at a small Baptist church a few miles outside Liberia's capital, Monrovia. Men came in suits, women in black outfits or church robes and children in white to honor the 69-year-old woman, who was a respected community leader.

Before the funeral, some of Barclay's closest family members bathed her body and dressed her in pink from head to toe. Her casket, lined in pink, remained open as mourners laid silk flowers atop her body. Some took photos on their cellphones while professional videographers stood by to record the event so that the experience could be shared with those who couldn't attend. 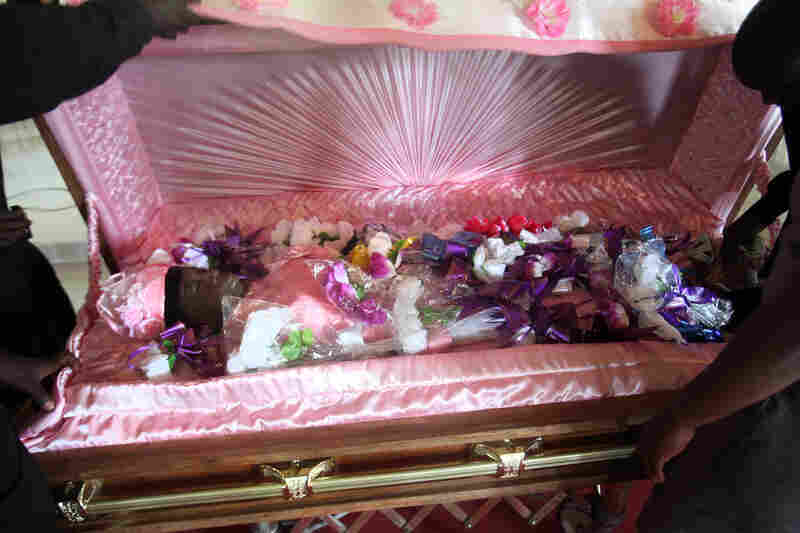 Family and friends paid final respects to Rebecca "Mama" Barclay by throwing silk flowers in her coffin and taking her picture during services at a Baptist church in Liberia. Gabriel B. Tait for NPR hide caption 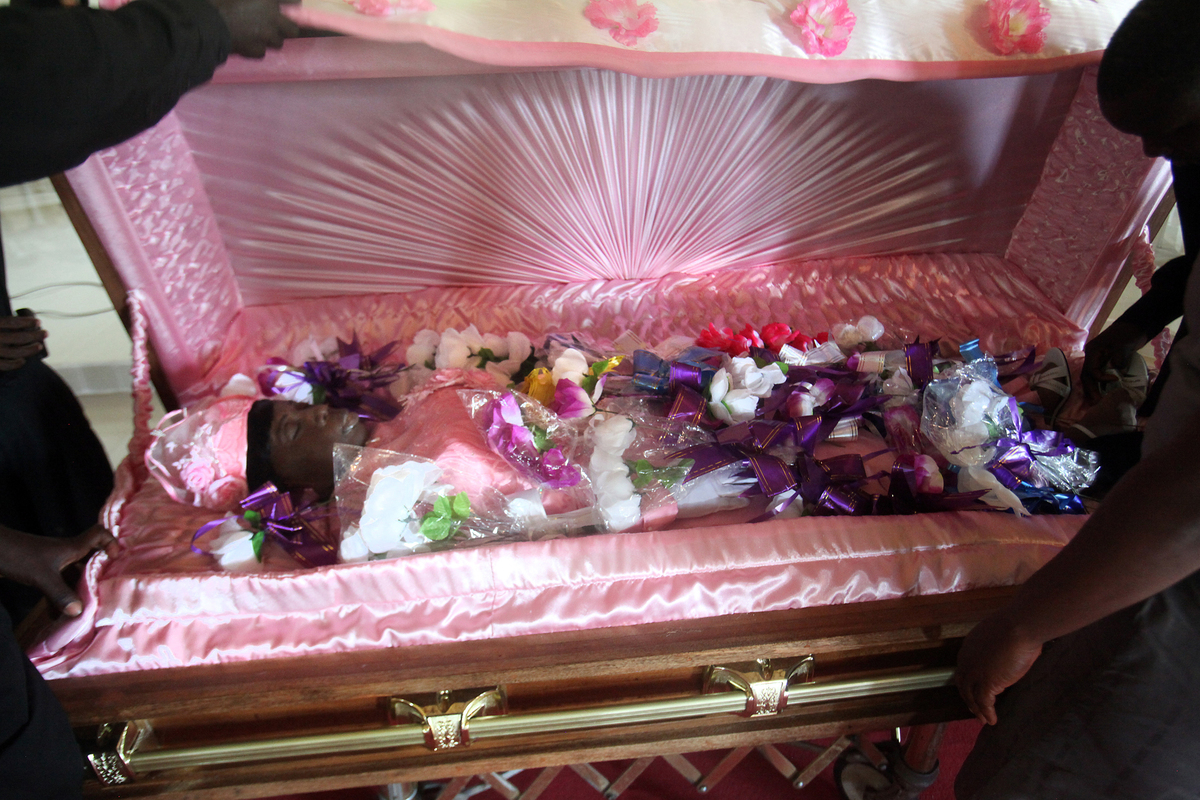 Family and friends paid final respects to Rebecca "Mama" Barclay by throwing silk flowers in her coffin and taking her picture during services at a Baptist church in Liberia.

Gabriel B. Tait for NPR

When it came time for burial, the mourners walked 2 miles on a dirt path to the burial site, with a band of trumpeters and drummers marching ahead. The day-long procession took place not only to celebrate Barclay's life but also to lead her into the afterlife.

For Liberians, "death is an extension of life," says Gabriel Tait, a photojournalism professor at Arkansas State University who attended Barclay's funeral while working on his dissertation on the culture of Liberia.

The entire funeral celebration in Liberia, from ceremonies for the dead to the actual burial, can last days, even weeks. Days of mourning, during which women gather in a house to cry together, are followed by a wake and a funeral. Friends, associates and family members travel long distances to pay their respects. So the more people who knew and respected the deceased, the longer the celebration.

But the arrival of Ebola has disrupted these cherished practices. Tensions have arisen between health care workers and families. The workers want to dispose of an Ebola victim's body quickly and safely, since the body is still contagious. The families feel obligated to give their loved ones an honorable burial, which calls for touching and washing the deceased.

But how do you encourage people to change their funeral traditions? That's a question that was considered at a meeting of the American Anthropological Association last week in Washington, D.C.

To understand what adaptations will work most effectively, you have to understand the funeral practices, says Mary Moran, who attended the conference. She's an anthropologist at Colgate University who has studied Liberian culture since the 1980s. Each region in Liberia has its own customs, she says, but there are overarching practices and beliefs throughout the predominantly Christian country.

For starters, a funeral is more than just the simple act of burying a body, she says. Liberians have a deep connection with their ancestors and believe that the way they bid farewell to a loved one can have an influence on their own life.

"So if things are going really badly — you lose your job, your child flunks out of school — among the things you're trying to figure out is, have I offended somebody?" says Moran. "And that someone could be living or dead."

Liberia's civil war — a 14-year conflict that killed 250,000 and ended only a decade ago — has made people particularly sensitive to the way dead bodies are treated. "Very often the way people experienced death during the war was a sudden attack on the place they were living," Moran says. "People scattered. If they survived, they tried to find family members later and many of them couldn't."

Survivors were often left wondering if their loved ones had lived or died, or if they had been buried in an unknown spot. "That's an ongoing distress," says Moran. "I've had people say, 'Every time I walk across the ground, I wonder if my mother's bones are under there somewhere.' "

For many Liberians, returning to traditional burial practices after the war was a sign that life was returning to normal. Now, when bodies of Ebola victims are taken away and cremated or buried without a proper sendoff, painful memories of wartime losses are triggered. But Moran says they are willing to alter their customs to Ebola-related safety considerations — as long as their loved ones are treated with dignity and respect.

Even cremation — not usually part of a traditional Liberian funeral — is tolerated now, as long as family members know where the ashes are buried. In two studies by the World Health Organization and the Liberian government, "There were people saying, 'We would like the remains to be put in a specific place in the ground so that we have a place to go and mourn,' " says Moran.

As Epidemic In Liberia Slows, Burying Bodies Remains A Challenge

Delaying funerals for the duration of the Ebola outbreak might also be an option, according to Moran and other anthropologists at the meeting. That's not an unheard of way to handle a death. Such funerals occur "when someone dies unexpectedly and the family is unprepared or they die during the harvest, when you can't just drop everything to put on a fancy funeral," says Moran. "Then the body will be buried with maybe minimal ceremony and the actual funeral celebration, the rituals, the feasting and dancing, will be put off for even a couple of years."

Waiting and holding funerals after the outbreak has subsided would allow for safe, immediate burial of Ebola victims while also allowing families to honor the dead later.

Moran hopes that all Liberian families will be given the opportunity to view a loved one's body from a safe distance before it's taken for cremation. Early in the outbreak, Ebola patients who died in a treatment center were buried or cremated before the family had a chance to say their goodbyes.

Families should also be allowed to take photos of the dead, Moran suggests. Taking photos and sharing them with family members, near and far, is a common Liberian tradition. After more than a decade of war and wondering what became of loved ones, proof of death is paramount. Allowing a family member to view the body and take photos might calm tensions between health workers and locals.

And when the country eventually emerges from its encounter with Ebola, she says, a memorial honoring all victims of the disease will go a long way toward consoling survivors.

Moran says she is often asked why Liberians have risked their lives to carry on these burial practices. She has a thought-provoking response: "Why do Navy SEALs and Army rangers risk their lives to recover the body of their dead? Concern about the bodies of our dead is a concern of all humans."