Accessibility links
Why Sterilization Is The Most Popular Form Of Family Planning : Goats and Soda The tragic news from India of women dying after being sterilized is not the norm. More than 200 million women a year rely on this procedure. Under proper conditions, complications are minimal. 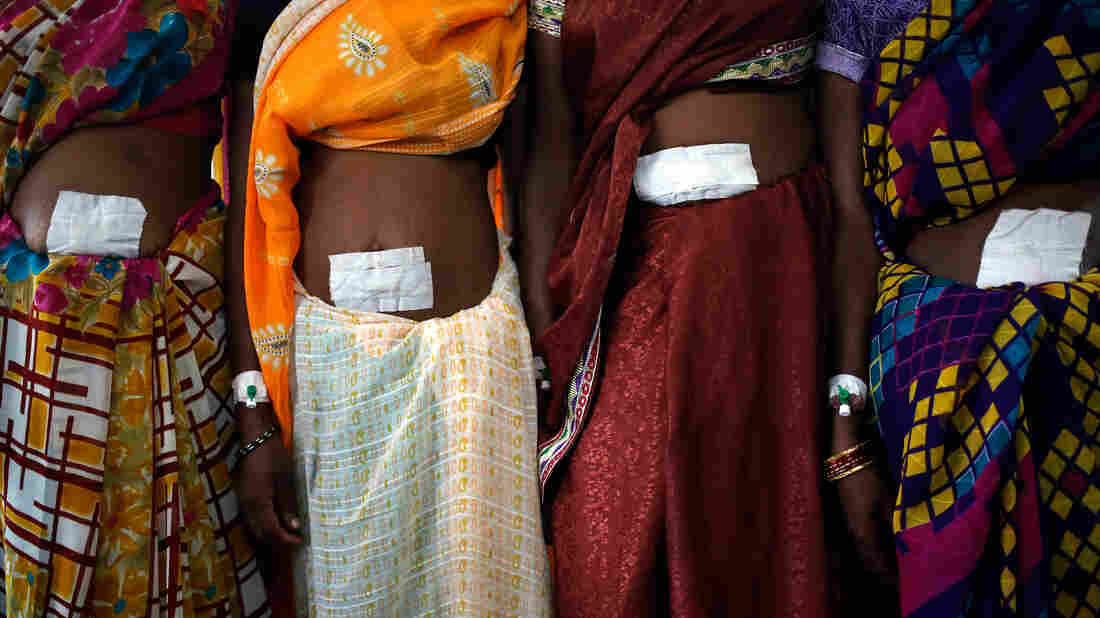 Women who underwent sterilization surgery at a government-run camp were hospitalized in the Indian state of Chhattisgarh after 13 patients died following the procedure. Anindito Mukherjee/Reuters/Landov hide caption 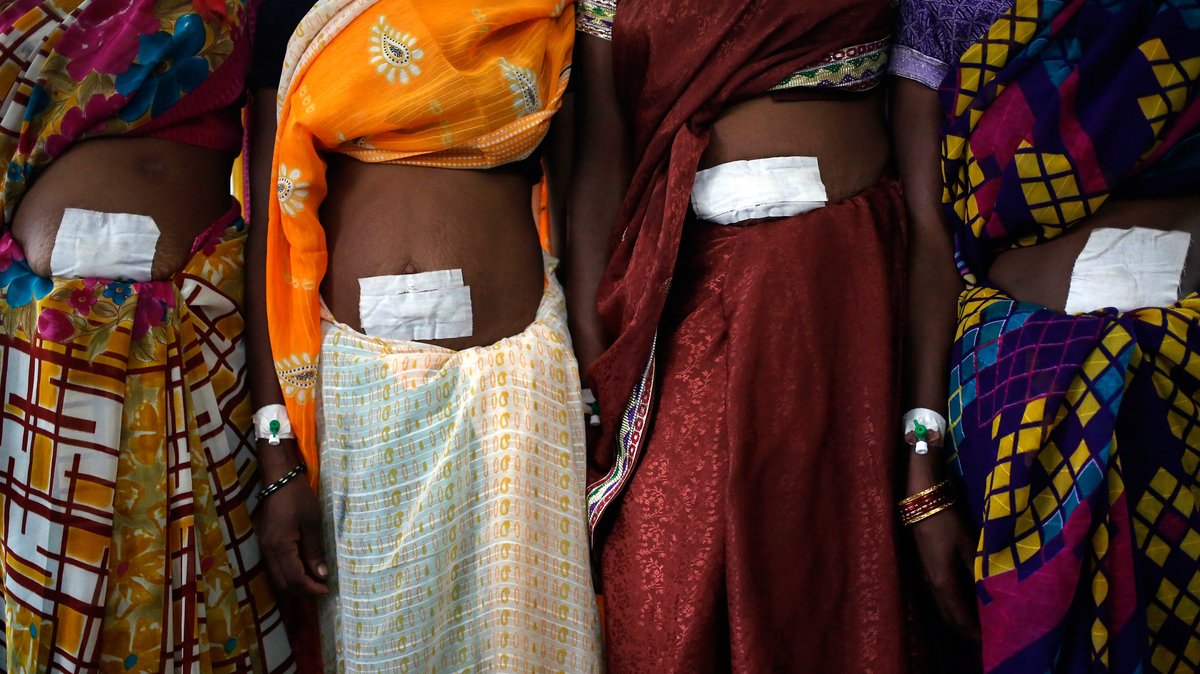 Women who underwent sterilization surgery at a government-run camp were hospitalized in the Indian state of Chhattisgarh after 13 patients died following the procedure.

Last week, 13 women died in India after undergoing sterilization procedures in the central Indian state of Chhattisgarh, possibly because of tainted pills administered after the surgery. This tragedy has cast a negative light on sterilization.

But in fact, female sterilization is the world's most popular form of family planning. In 2009, 223 million women used sterilization as birth control and that number is on the rise.

For women, sterilization is usually done as tubal ligation, a minimally invasive surgery where the Fallopian tubes are cut and tied off. For men, it's the vasectomy, a procedure in which the vas deferens is cut and tied. This procedure is used by about 28 million men worldwide.

Family planning advocates, who prefer the term "permanent contraception" to "sterilization," say it is effective, low-risk and inexpensive, as well as empowering to women. For insights, Goats and Soda talked with John Townsend, director of reproductive health at the Population Council in Washington, D.C.

Why is sterilization so popular for women?

In countries where people have their children early, if they want two or three [children], they have completed their desired family size quite early. To stay at that family size, they would have to use some form of contraception for maybe 25 years. [With permanent contraception] they don't have to come back, buy supplies or worry about stock-outs [stores running out of desired products]. They can have the life they want without worrying about unwanted pregnancies.

How effective is the surgery?

For female sterilization, the failure rate is half a percent, and for vasectomy, it's .15 percent. Compare that to injectable birth control, which is 5 to 6 percent, the pill, which is 9 percent, condoms which are around 18 percent.

Usually [permanent contraception] services are free at a public hospital or relatively low-cost. They are administered in government hospitals. For women who have unintended pregnancies, up to half get abortions. An abortion is never low-cost. Even in India — where it is supposedly free and widely available — it can cost $50 to $500. And there is no guarantee that it's safe. 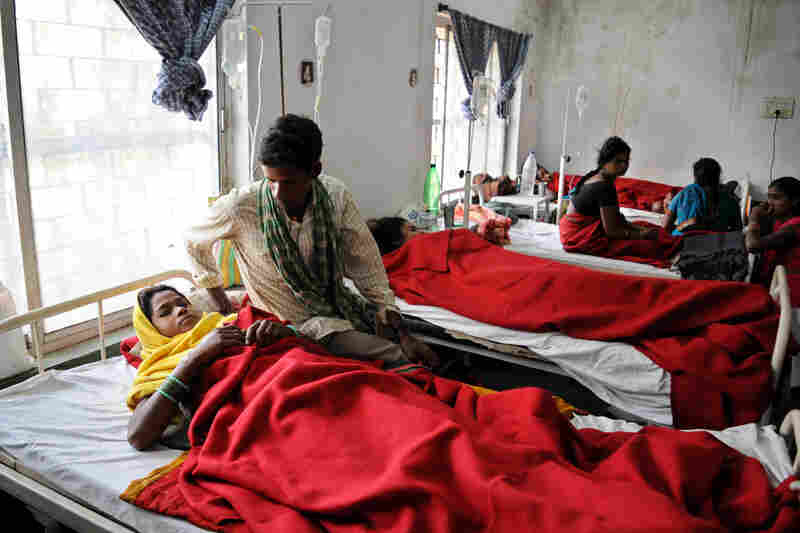 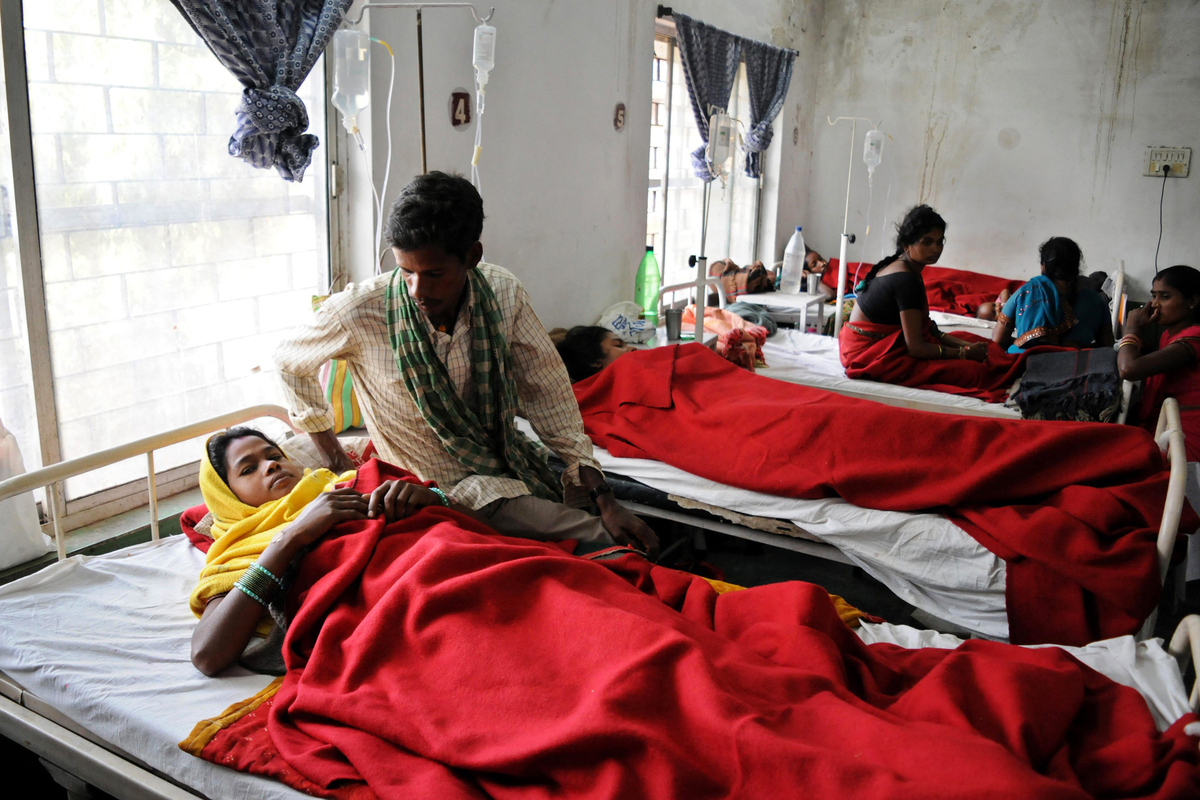 Patients who underwent sterilization surgery were treated in an Indian hospital last week.

What are the risks of sterilization surgery?

The potential risks for vasectomy are significantly lower than the techniques used for women. [For] vasectomy, nowadays, they don't use a scalpel and the operation doesn't require anesthesia. It takes about three minutes. I got mine in Mexico, and it took longer to wait for the elevator than to get the operation.

For women, it's more complicated. But techniques have improved dramatically over time, and under good clinical practice, the complications are minor: certainly less than 1 percent. The type of risk you see is when [the surgery is performed by] someone without skill or not using hygienic techniques.

If the risks are less for vasectomy and it's a less invasive procedure, why do more women get sterilization surgery than men?

Women who have the surgery have confidence that it's actually been done. Men rarely talk about vasectomies, while it's relatively easy for a woman in almost any country to find a woman she can talk to about the experience [of sterilization], where she went, what the doctor was like and what she should expect.

From the supply side, there are very few skilled providers for vasectomy in most countries. OB/GYNs have gone through training and learned how to do female sterilization.

What makes for a safe environment for these procedures?

It's important that the man and woman are given the opportunity to be fully informed and that they give their consent, which, in most places, for permanent contraception, should be written. It shouldn't be a complicated, seven-page form that essentially is only preventing the providers from any lawsuits. [Those seeking the procedure] should be completely informed about the risk and have opportunities to talk to a counselor. They should have a space that is clean and indicative of respect for the patient. They should be given high-quality medicines and techniques that are modern, accepted and part of professional protocols. They should be given the opportunity for recovery, and arrangements should be made with their family for safe transport. They should be given contact information if they develop a fever or a symptom that would suggest a side effect or complication.

Is this what most women experience?

I'd say it's highly variable. Even in the U.S. you have malpractice because physicians don't do what they are supposed to. I would say 50 to 80 percent compliance, for any clinic, on all these things is more common than 100 percent. The places where you get the poorest care is where they are understaffed, unsupervised, with lots of patients demanding care and a health system that isn't very supportive of that.

In your work, have you found that permanent contraception can empower women? Does it improve women's lives?

As women have the children they want, if they decide on permanent contraception, they no longer have to spend that money every month or every three months for an injectable [contraceptive] or every three to five years for an implant. They can take on other things with the confidence they won't become pregnant. They can take on jobs and we know that women who have opportunities to do that often do relatively well and are able to contribute income to their families. They have a sense of autonomy, are less subjected to gender-based violence and overall, have a fuller, richer life.